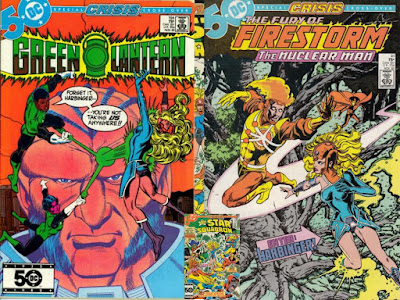 While that first issue showed some of the recruitment meetings, others were handled in the individual titles of characters.

Here is where Harbinger reached out past the Crisis title..... 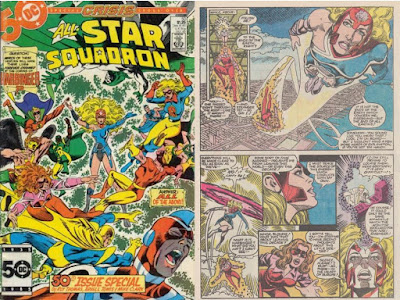 ...but so much more happened as well. 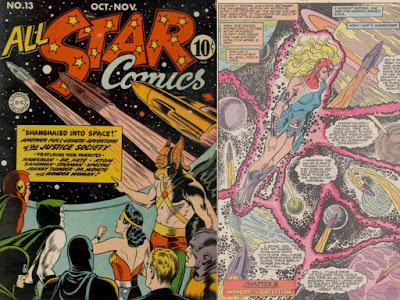 The current JSA was "Shanghaied Into Space" in an adventure based on their appearance in All-Star Comics #13 (October-November, 1942 - but, instead of going to the eight other planets of their own solar system, they were sent through hyper-space to other dimensional versions of Sol's planets, that were inhabited).

The rest of the Quality heroes (including Plastic Man and Phantom Lady) followed Uncle Sam to Earth-X (an unfortunate world where, at the time, the Nazis were winning World War II). 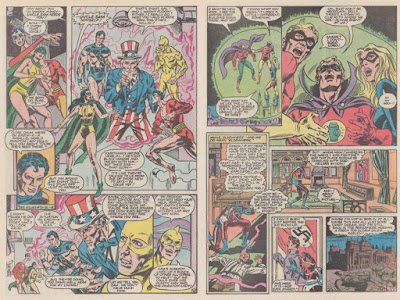 Commander Steel, behind enemy lines, defeated his enemy, but was thrown into another Earth (Earth-1) that had no super heroes during World War II, and there he remained (having a grandson, who would be Steel in the JLA).

Johnny Chambers and Libby Lawrence (Johnny Quick and Liberty Belle) got married, and headed to their honeymoon, except for the red skies, which had Green Lantern (Alan Scott) come for their help, and then ended them up on Earth-S for a time. 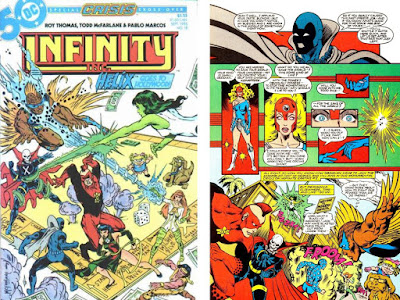 In "Helix Goes To Hollywood" from Infinity, Inc. #18 (September, 1985) by Roy and Danette Thomas, Todd McFarlane and Pablo Marcos, the members of Infinity, Inc. were facing their foes, the super villain team Helix, when Harbinger arrived to take Obsidian (Todd Rice) away.

The rest of the team soldiered on, getting involved in the Crisis up to Infinity, Inc. #25, as well as their first annual and being part of the last JLA/JSA team up in Justice League of America #244 (with these issues all being reprinted in the Crisis On Infinite Earths Companion Deluxe Edition Volume 2 of 2019. 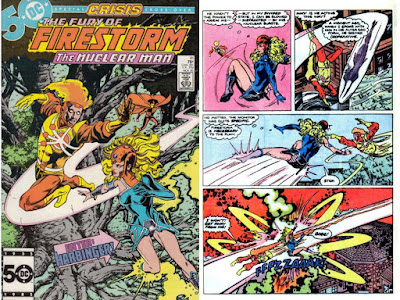 Ronnie Raymond and Martin Stein were trying to settle into their new life at college in Pittsburgh in "Storm Warning" from Fury Of Firestorm #41 (November, 1985) by Gerry Conway, Rafael Kayanan and Ian Akin (cover by Rafael Kayanan and Dick Giordano).

Harbinger, bring along Psycho-Pirate, came to retrieve Firestorm (and Psycho-Pirate's emotion manipulation powers caused a little bit of a problem first, as he induced fright in Martin Stein, the "thinking" half of Firestorm).

This issue and the next of Fury of Firestorm were this titles Crisis crossovers, and were reprinted in the Crisis On Infinite Earths Companion Deluxe Edition Volume 1 of 2018. 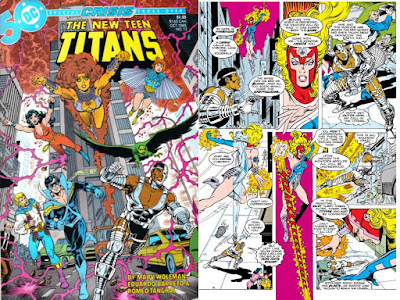 This issue showed that some time had passed between Harbinger taking Cyborg to the Monitor's satellite and the effects of Crisis hitting Earth... 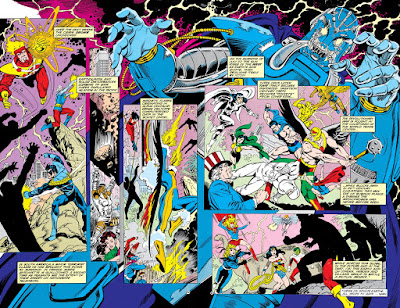 ...as shown when the Titans, Outsiders and Superman dealt with some Crisis problems (mirroring issue #3 of the main Crisis series), as well as the Titans involvement in Crisis #4-#9, and Wonder Girl getting help from Firehawk in Fury of Firestorm #42, while Nightwing, Starfire and Jericho go back to Starfire's homeworld of Tamaran (which unfolds over the next few issues of New Teen Titans, also involving the Omega Men).

New Teen Titans #13 and #14 are reprinted in the Crisis On Infinite Earths Companion Deluxe Edition Volume 2 of 2019. 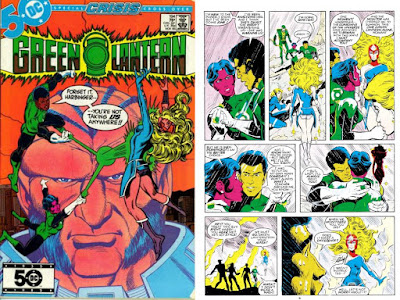 The last individual recruited was Green Lantern in Green Lantern #194 (November, 1985) by Steve Englehart, Joe Staton and Bruce D. Patterson in "5".  Green Lanterns Katma Tui and John Stewart were coming back from a space mission, when they see the red skies on Earth, and check in with Green Arrow and Black Canary in Star City to find out what is going on. 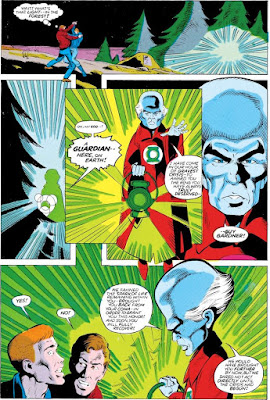 That is when Harbinger shows up to recruit John, but first a battle happens between Green Arrow, Black Canary and Katma against Harbinger.

Explaining her need, she takes John along (as soon as he "fixes" his costume).  Meanwhile, former Green Lanterns Hal Jordan and Guy Gardner are taking steps to get their hands on a Power Ring, with the Guardians of the Universe providing an unexpected answer.

John Stewart goes through the same scenes he did in Crisis #1 and #2, fighting Shadow Demons and learning about the threat the worlds face.  This story, and the rest of the Green Lantern Crisis issues are reprinted in the Crisis On Infinite Earths Companion Deluxe Edition Volume 1 of 2018. 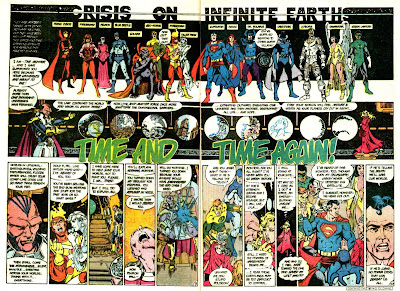 The other original recruits of the Monitor were King Solovar of Gorilla City, Dawnstar of the 30th Century Legion of Super-Heroes, Blue Beetle of Hub City, Psycho-Pirate (JSA foe), Arion (lord of ancient Atlantis), Psimon (of the Fearsome Five), Geo-Force (of the Outsiders), the Golden Age Superman, Green Lantern foe Dr. Polaris, and Firestorm foe Killer Frost (the second version of his original foe). 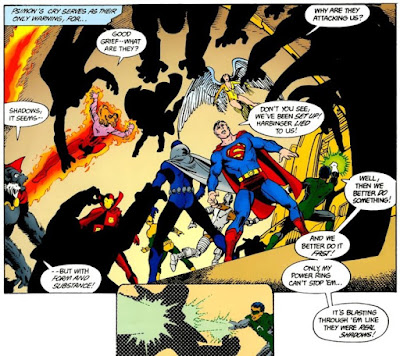 This group faced a breach of Monitor's satellite by the Anti-Monitor's Shadow Demons, and then were dispatched through time and space to protect the Monitor's towering tuning forks in an attempt to stave off the Crisis.....
Posted by Dave's Not Here Comic Blog at 7:31 PM