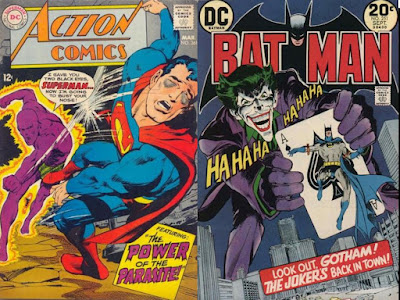 An incredible artist, an influence to many, with decades of stunning work, who shall be missed. 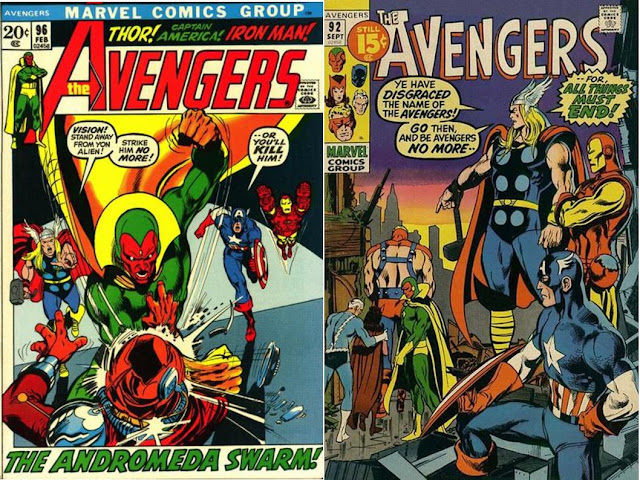 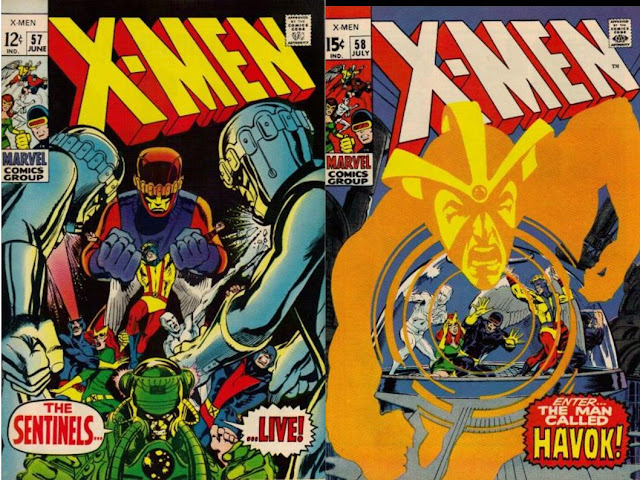 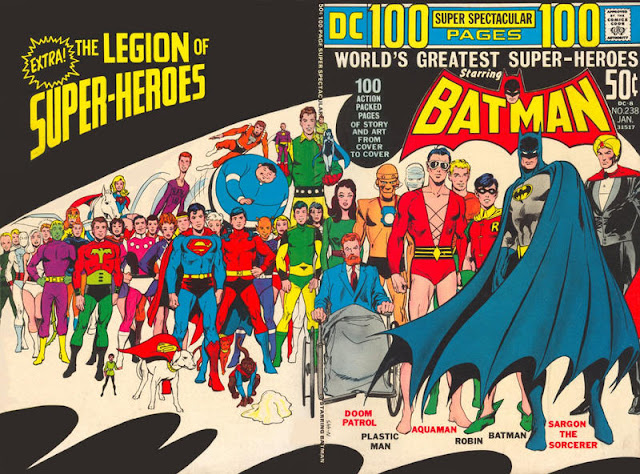 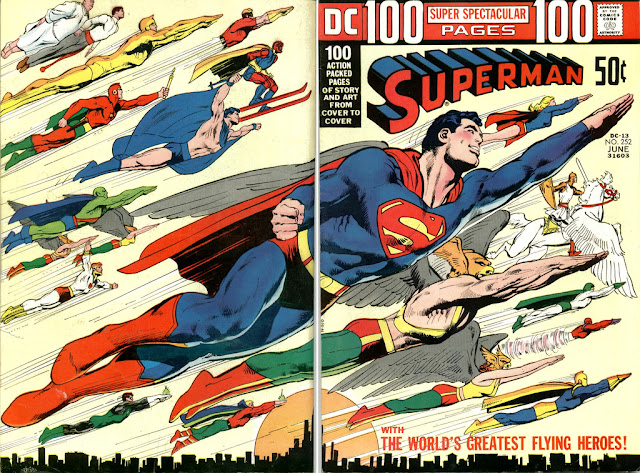 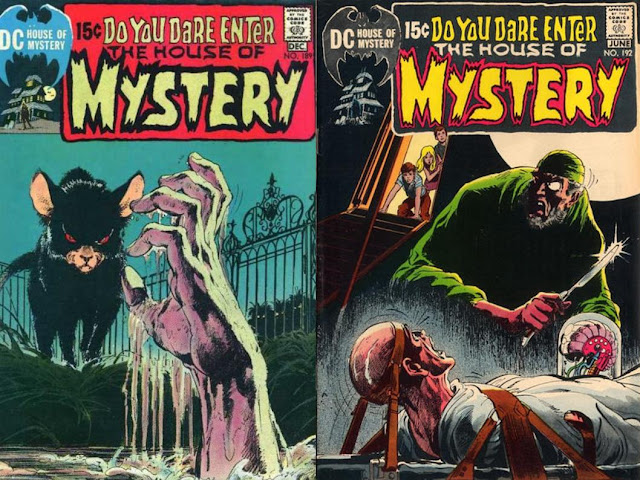 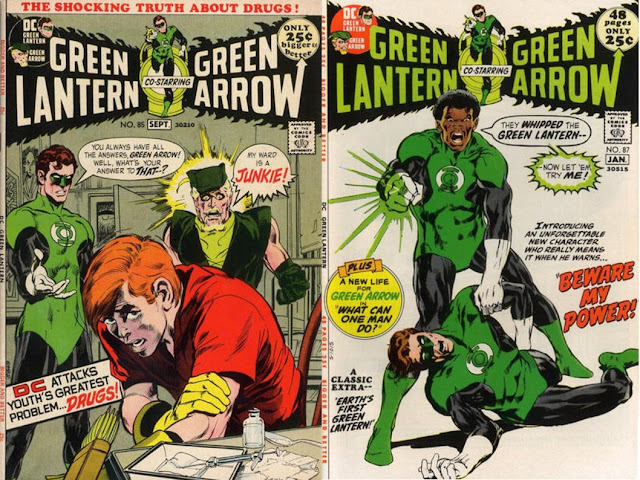 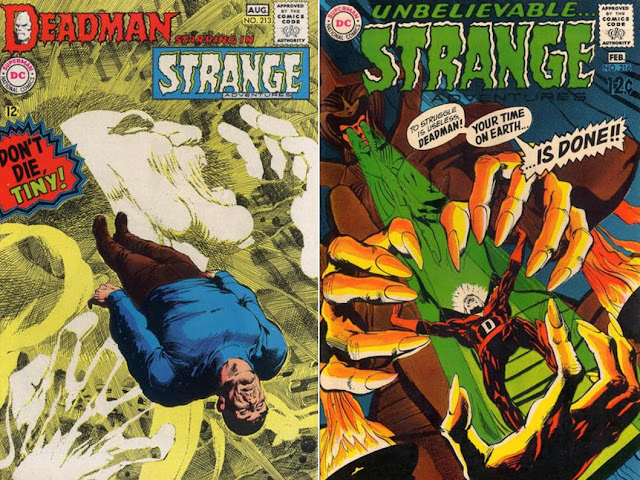 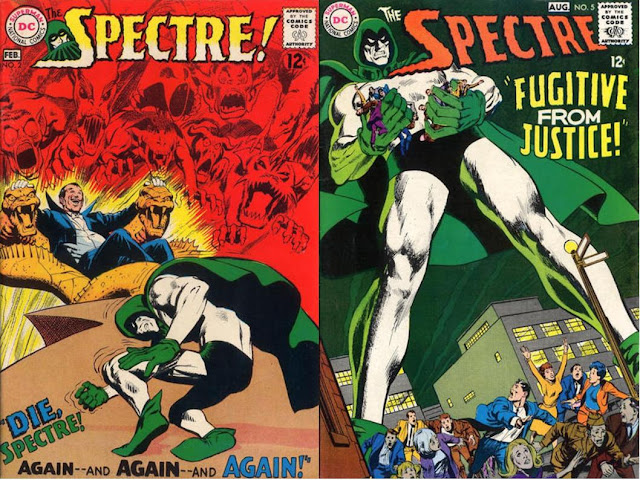 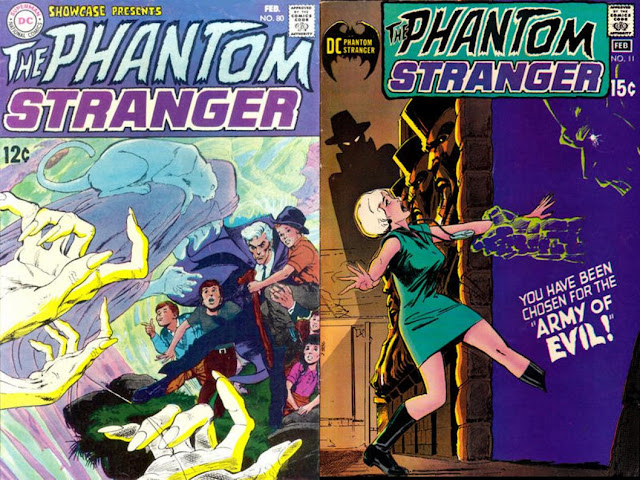 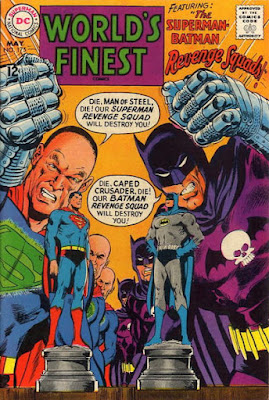 For these and so many, many more, we will remember Neal Adams.
Posted by Dave's Not Here Comic Blog at 12:33 PM No comments: 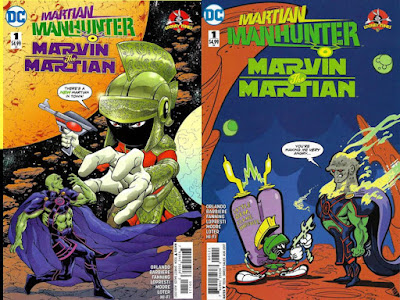 ....that of the DC detective, the Martian Manhunter, and Looney invader, Marvin the Martian, under covers from Aaron Lopresti and Stephen DeStefano!

It's an event that thrills Martians across the multiverse. 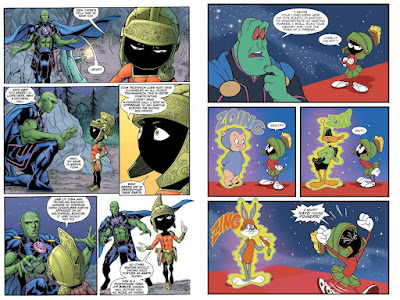 In this DC Comics/Looney Tunes crossover, the Martian Manhunter responds to a call from Marvin the Martian looking for other Martians, and J'Onn J'Onnz has to stop Marvin from blowing up the Earth in the main story by Steve Orlando, Frank J. Barbiere, Aaron Lopresti and Jerome Moore, while, in the more animated back up by Jim Fanning and John Loter, the Martian Manhunter tries to help the little fellow with his loneliness as Marvin the Martian covets J'Onn's many Martian abilities (which Marvin doesn't have). 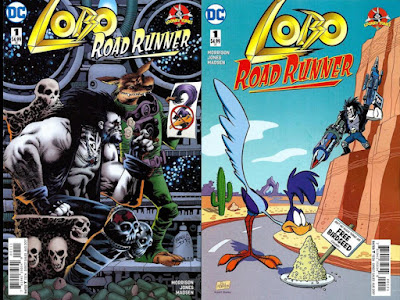 Going out of the normal comfort range for this one, to the farthest depths of space, and the vastness of the American desert....

...between the "Main Man", Lobo, an invincible, unkillable bounty hunter with a penchant for weaponized mayhem, and the "Accelleratii Incredibus" Road Runner, a super fast inhabitant of the highways with little regard for speed limits (or even the laws of nature and physics), with covers by Kelley Jones and Bill Morrison from August, 2017. 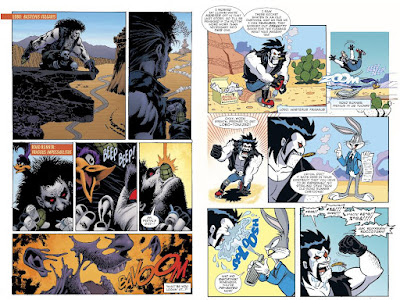 For this DC/Looney Tunes team up, at the behest of scientists at an Area 52 like lab, Wile E. Coyote (the Road Runner's usual nemesis, user of ACME weapons) approaches Lobo to hire him to get the Road Runner, which causes the space thug to come to Earth to track the fast running beast, yet, not unlike Wile E. Coyote, this weaponized Czarnian falls prey to the running jokes and speed tricks of the Road Runner, in the main story by Bill Morrison and Kelley Jones.  As a back-up, there are even more pranks by Road Runner on Lobo (whose failure with weapons against the bird is oddly similar to Wile E. Coyote, making this not so odd a book), in an animated style, with Bill Morrison handling both the writing and art. 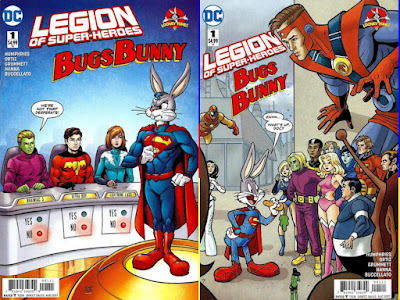 Getting close to Easter, and thinking of rabbits and gatherings, so, what would be more appropriate than taking a look at a team up...

Enjoy these covers by Tom Grummett and Karl Kesel, and the variant by Ty Templeton. 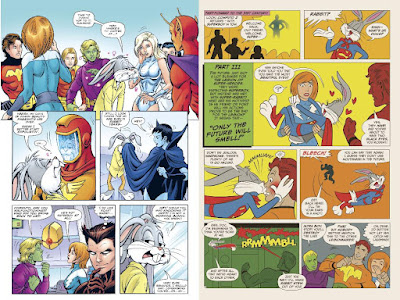 Yes, a part of the DC/Looney Tunes series from August, 2017, with a main tale in the super-hero style (by Sam Humphries, Tom Grummett and Scott Hanna), with Supergirl in the Legion's future.  To save her, Brainiac 5 sends Computo 2 back to Smallville to recruit Superboy, but ends up with Bugs Bunny instead, with Juan Manuel Ortiz providing the animated back-up, telling the tale from the side Super-Rabbit (Bugs Bunny), and how the Legion helped his really wrong turn at Albuquerque. 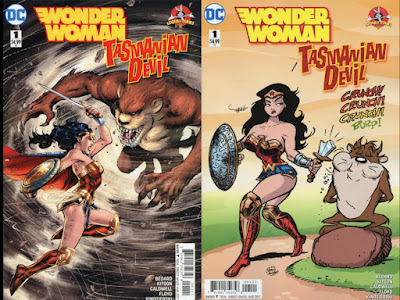 Now, for something a little different...a quick peek at a more recent team-up, featuring two characters that have been around for decades, yet hadn't had adventures together....

....Wonder Woman and the Tasmanian Devil!

As a part of the DC meets the Looney Tunes series, this issue came out in August, 2017, with a regular cover by Jim Lee, and a more animated cover by Bryon Vaughns. 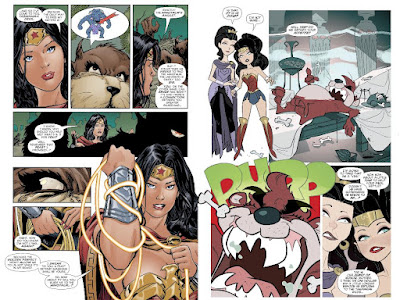 In the more "serious" side, Wonder Woman had to recruit the Tasmanian Devil to help rescue Queen Hippolyta and the Amazons from Circe and the Minotaur (by Tony Bedard, Barry Kitson and John Floyd), and, the more "animated" epilogue featured Taz getting the meal he was promised by Diana (as well as a few more antics), by Tony Bedard and Ben Caldwell.

Archie Has Got Game Archie Andrews shows that he has some of Riverdale's best game, but, that game doesn't seem to be baseball in these two classic covers of Archie Comics (#82 from September-October 1956 and #96 from November, 1958).

Posted by Dave's Not Here Comic Blog at 12:33 PM No comments: 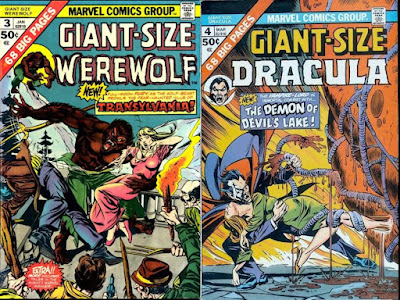 Why, with some Giant-Size covers by Gil Kane from the 1970s with some of Marvel's greatest monsters! 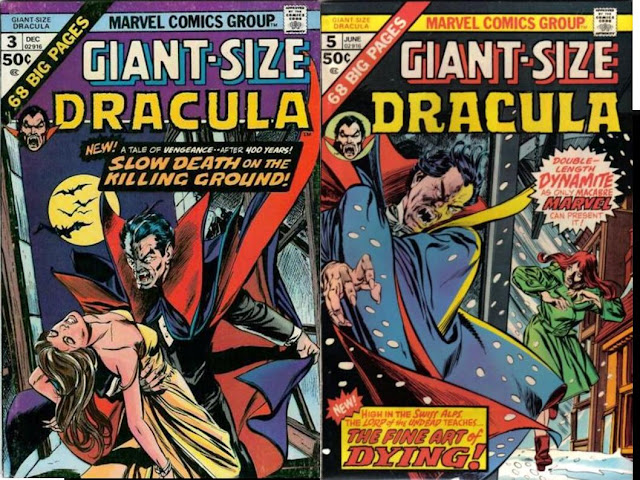 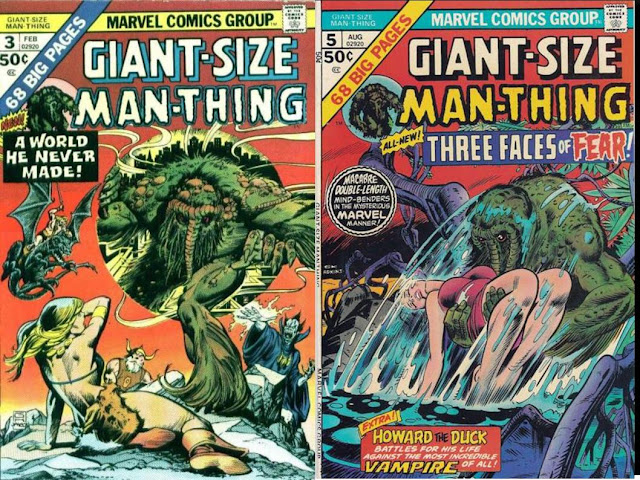 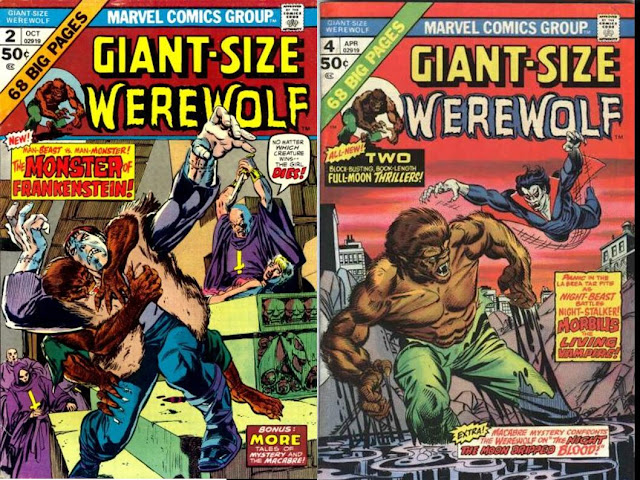 BONUS! (because these Spider-Man books featured monsters....including Morbius, Man-Wolf and the Lizard!) 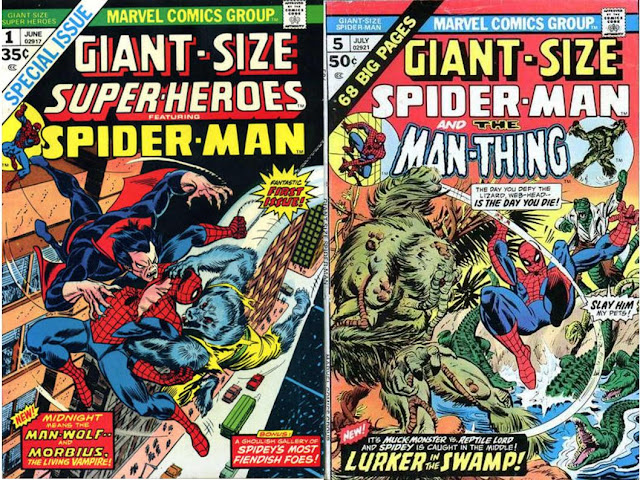 Posted by Dave's Not Here Comic Blog at 2:25 PM No comments: 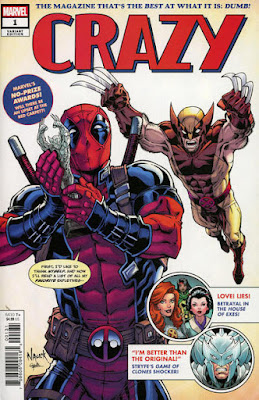 May your day not be crazy, like what Wolverine is about to do to Deadpool on this incentive cover for Crazy #1 from December, 2019!

Thanks for all the fun covers over the years...

...including stuff from Young Justice... 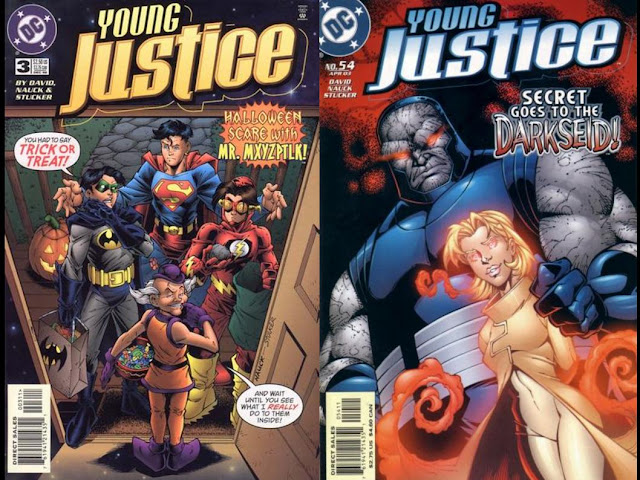 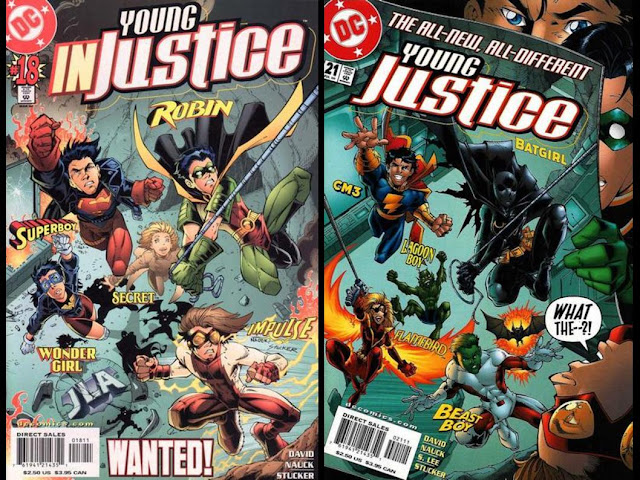 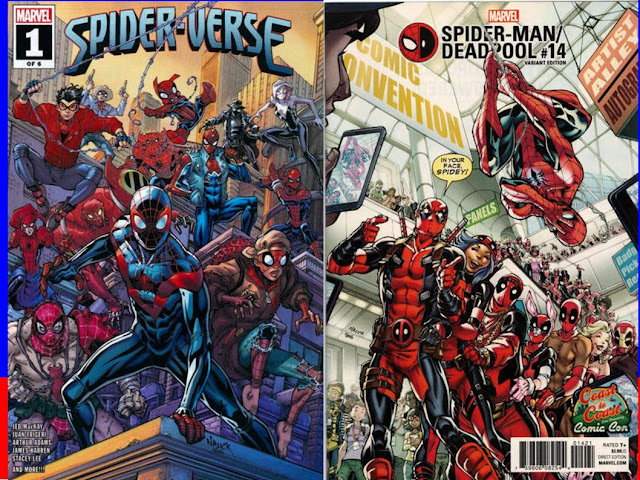 ....and even Avengers and X-Men related projects! 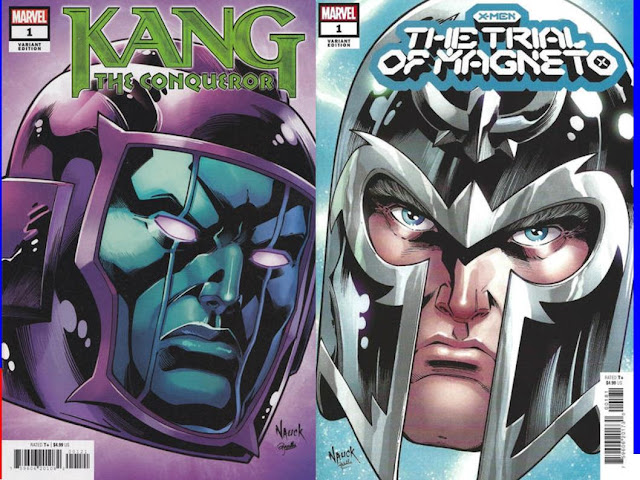