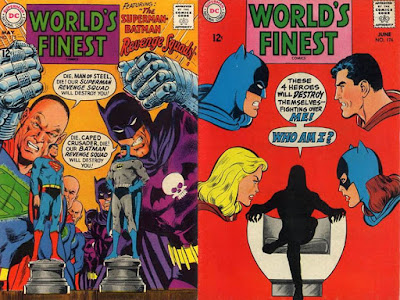 Artist extraordinare Neal Adams had a few covers and stories under his fingers, even working on Batman in Brave and the Bold, Batman and Detective Comics, and on Superman in Action Comics, Superboy, Superman, Superman's Girlfriend Lois Lane and Superman's Pal Jimmy Olsen....and even a cover for World's Finest Comics, but Neal also drew two incredible issues of the Superman-Batman team-up book! 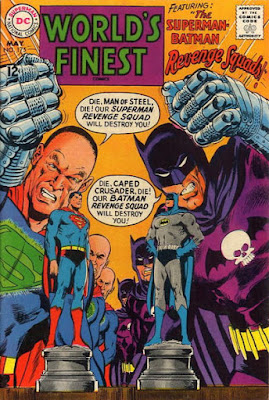 The first of the two interiors by penciller Neal Adams was World's Finest Comics #175 (May, 1968) by writer Leo Dorfman and inker Dick Giordano. featuring a face-off against "The Superman-Batman Revenge Squads"!  This story saw old Superman foes, the Superman Revenge Squad (aliens who had a grudge against Superboy, and continued that after Superboy became Superman), and the new, just formed Batman Revenge Squad.  The heroes were competing in contests of skill, not knowing the villains had rigged their trophies to explode when returned to the Bat Cave and the Fortress of Solitude....thankfully, with the help of Robin and Jimmy Olsen, the heroes thwarted the evil-doers plans.

Even better, Martian Manhunter's first appearance was reprinted in this issue as well! 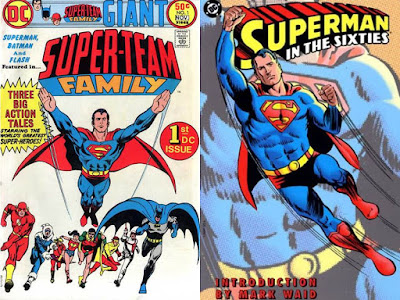 Best of all this story has been reprinted many times...


...including in Super-Team Family #1 (October-November, 1975, with a cover by Dick Giordano), Superman in the Sixties tradepaperback  from 1999, the Batman Illustrated by Neal Adams Volume 1 Hardcover from 2003 and softcover from 2012 and in black and white in Showcase Presents: World's Finest Volume 4 of 2013. 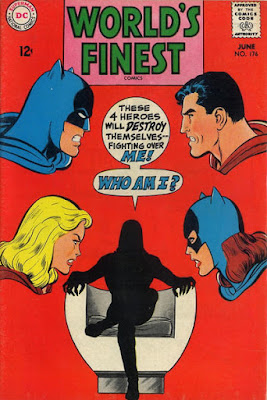 "The Superman-Batman Split" was Neal Adams other pencilled issue, in World's Finest Comics #176 (June, 1968) by writer Cary Bates and inker Dick Giordano.  This time, Superman and Batman were pitted against each other by a pair of alien brothers, with Batman recruiting Supergirl for help, leading Superman to ask Batgirl for help....the two kept busy for a while, with Robin and Jimmy Olsen figuring out the real problem....yet not being able to reveal the ending until this had played out.


Best of all, Martian Manhunter's 2nd appearance was reprinted in the back of this issue! 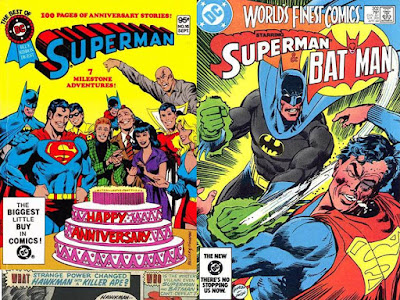 This issue also found itself reprinted many times...

...in Super-Team Family #3 (February-March, 1976) that also featured a new Flash/Hawkman team-up (and a classic Green Arrow/Aquaman crossover from Adventure Comics), in the Best of DC #16 (September, 1981) with a cover by Rich Buckler and Dick Giordano, in World's Finest Comics #302 (April, 1984) with a cover by Ed Hannigan and Klaus Janson, in the Batman Illustrated by Neal Adams Volume 1 Hardcover from 2003 and softcover from 2012, in the Superman/Batman: The Greatest Stories Ever Told tradepaperback of 2007, and in black and white in Showcase Presents: Batgirl Volume 1 of 2007 and Showcase Presents: World's Finest Volume 4 of 2013. 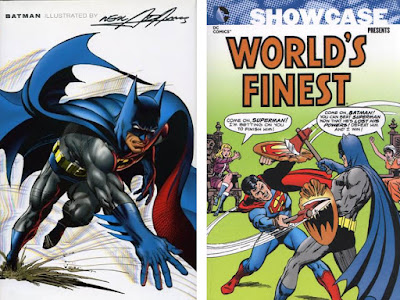 Oh, Superman and Batman, why can't you get along?

Posted by Dave's Not Here Comic Blog at 3:57 AM