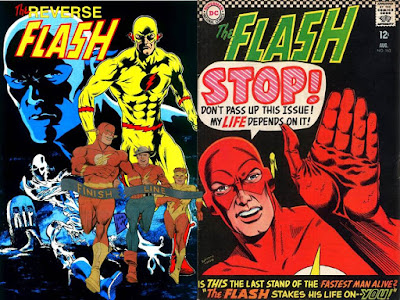 While DC Comics is getting better about collecting old stories, Flash has been running behind in that race (at least as far as his later Silver Age and Bronze Age stories...as well as the earlier stories of the time when Wally West was the Flash).

So, to help out, a few ideas for collections that would get the hearts of fans of the CW's Flash show racing! 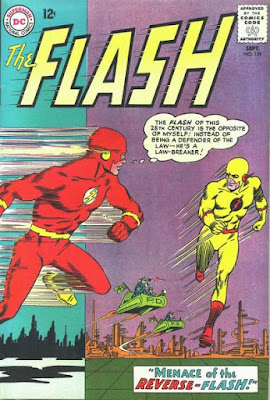 One of the biggest battles of the Flash's first season was his fight against the Reverse-Flash.  While his origin tale from Flash #139 (September, 1963 by John Broome, Carmine Infantino and Joe Giella) has been reprinted, only a few of his later appearances have been collected in color (most notably, his participation in Superman-Flash races in Flash #175 and DC Comics Presents #1 and #2, and his appearances as a member of the Secret Society of Super-Villains in Secret Society of Super Villains #12-15 and Justice League of America #166-168 facing the Justice League of America, though only available in hardcover, so a softcover companion like Secret Society of Super Villains Volume 1 had would be nice). 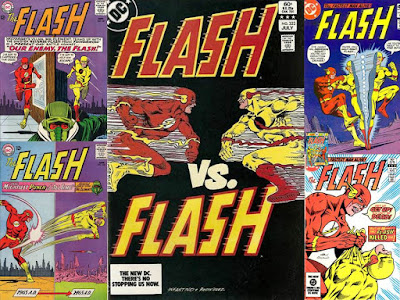 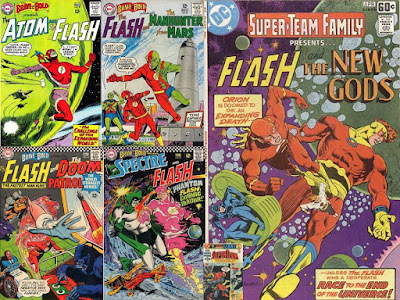 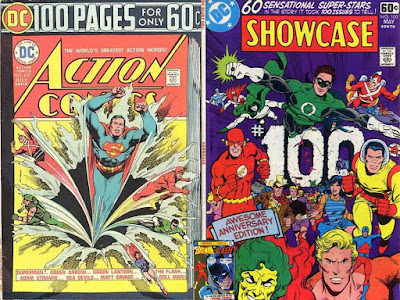 While that's only 157 pages, additional pages could be found from Flash #198 (a back-up story meeting Zatanna), Brave and the Bold #99 (the only Batman/Flash team-up not reprinted in color), Action Comics #437 (with Superman, Green Arrow and Green Lantern as well, following up on a Superman/Green Arrow team-up from World's Finest Comics #210, and maybe Superman/Green Arrow team-ups could be collected), and Showcase #100 (which has Flash working with, well, everyone who premiered in Showcase, a title which introduced Barry Allen to the world as well!), which would get you over 240 pages with covers! 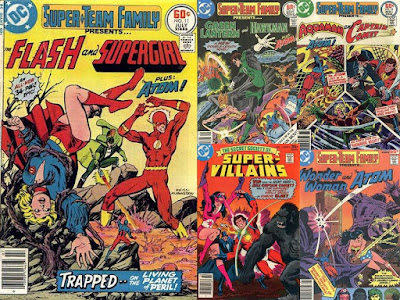 Regular readers might realize that we left out Super-Team Family #11, with Flash, Supergirl and the Atom vs. T.O. Morrow....and as all of those characters have appeared in live action TV shows, it would be a shame not to see this collected....but, that could be collected with Super-Team Family #12-14, which is a mini-Atom saga, looking for his missing wife, Jean Loring.... 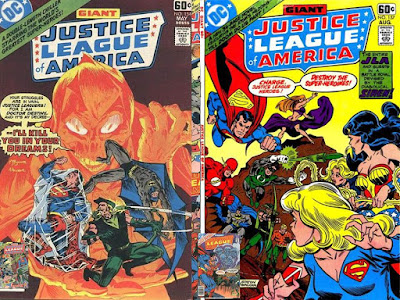 ....and add Secret Society of Super-Villains #10, and Justice League of America #154-157, to see the saga completely through, ending in the Atom's wedding (which Supergirl and Captain Comet also guest star in!

You even get a lot of action with Superman, Batman, Green Arrow Black Canary, and even Grodd and Captain Cold) all right round 300 pages. 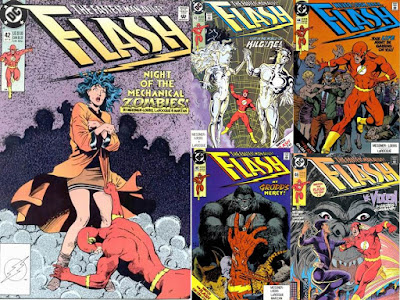 When Barry Allen disappeared for a while, Wally West took over as Flash (previously being Kid Flash, the Flash's sidekick).

It took a while for Wally to get use to being the Flash, and he even wore the same outfit as Barry Allen did for a time. 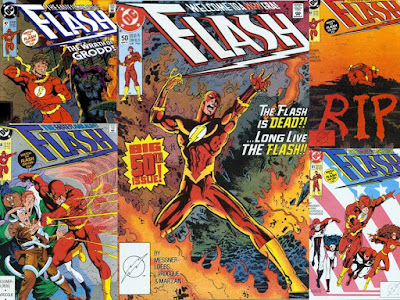 But, in a story running from Flash #42 to Flash #50 (all by William Messner-Loebs, Greg LaRocque and Jose Marzan Jr., Wally comes to terms with Barry's legacy, gets closer to girlfriend, Linda Park, faces his own foe of Kilg%re, fights Grodd alongside Vixen and Rex the Wonder Dog, and then deals with Vandal Savage, all the while protecting his friends including Elongated Man, Tina McGee and Chunk.  Throw in the epilogue of Flash #51 (with Flash helping the new Lady Flash and the Kapitalist Kouriers, written and drawn by the same team, but inked by Roy Richardson), and you'd have about 250 pages of super-speed fun! 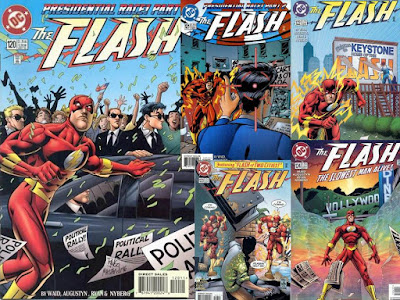 Last, but not least, a little dive into Mark Waid's run of writing the Flash, also with Wally West as the Flash.  By this point, Jay Garrick had returned, Wally also worked with new heroes like Argus, and also was growing quite close to Linda Park....but, he was also having problems living in Keystone City.... 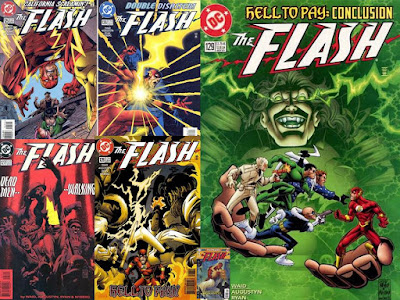 ...but, starting with Flash #120, written by Mark Waid and Brian Augustyn, pencilled by Paul Ryan and inked by John Nyberg all the way through Flash #129, Wally dealt with a rogue in the Presidential race, becoming a bi-coastal super-hero, new foe Mr. Frost, old upgraded foe Major Disaster....as well as the return of the Rogues' Gallery, whom had been assumed dead from their dealings with the demon, Neron, in Underworld Unleashed (and Argus, Jay Garrick and the Justice League of America guest-star to help with this!)...all in 230 pages, including covers (and, throw in Flash Annual #10 from 1997, to get the collection up to 283 pages...and see Wally fight Rainbow Raider, as well as a Pied Piper solo story...). 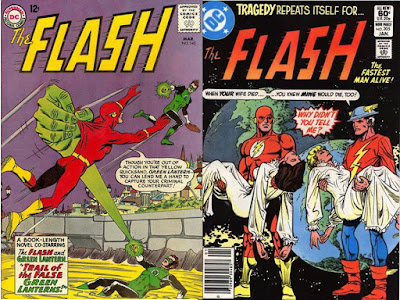 By no means is this a complete coverage of the Flash, but if we could see these collections, and maybe a few others (like Flash/Green Lantern team-ups, or a third Crisis on Multiple Earths: The Team-Ups collection, both of which will likely be covered later....and both have been teased at here), Flash's history wouldn't be left in the dust.....
Posted by Dave's Not Here Comic Blog at 3:03 AM