Luthor vs. Batman and Superman Part 2 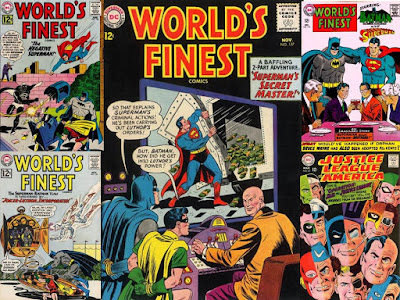 Here's the next batch of their conflicts, added to what we've covered before! 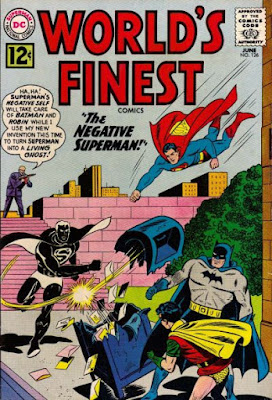 World's Finest Comics #126 (June, 1962) saw Superman, Batman and Robin face off against "The Negative Superman" in this story by France Herron, Jim Mooney and Sheldon Moldoff, under a cover by Dick Dillin and Sheldon Moldoff.  Luthor created a device that split Superman into a positive and negative halves, with the Dynamic Duo working extra hard to bring their friend back together (Batman even tried Kryptonite on the Negative Superman....to no avail). 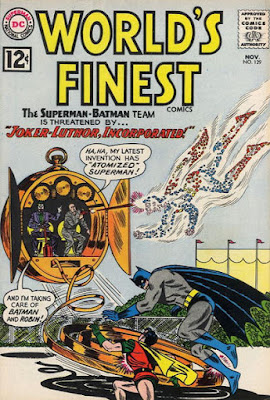 World's Finest Comics #129 (November, 1962) sees another Luthor/Joker team-up, in "Joker-Luthor, Incorporated" by France Herron, Jim Mooney and Sheldon Moldoff, under a Dick Dillin/Sheldon Moldoff cover, with Joker setting up shop in Metropolis to menace the Man of Steel (and when he drags Luthor into it for help, Superman gets help from Batman and Robin to defeat the dastardly duo!).


This story was reprinted in DC Special #8 (July-September, 1970), as part of the precursor to the Wanted: The World's Most Dangerous Villains series of reprints, and in black and white in Showcase Presents: World's Finest #2 of 2008. 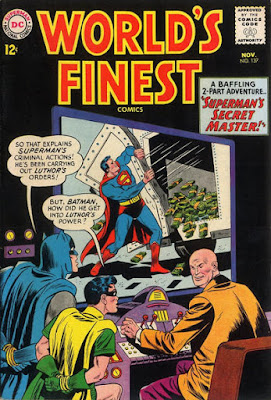 "Superman's Secret Master" is the next story with the World's Finest team facing Luthor, from World's Finest Comics #137 (November, 1963) by Bill Finger and Jim Mooney, under a cover by Jim Mooney and Sheldon Moldoff.  This time, Luthor was helping aliens in space, while Luthor used a Superman robot to make people think Superman had turned evil and was helping Luthor.  The Dynamic Duo worked to clear Superman's name, and the three heroes took down Luthor and the robot!  Hmmm, Luthor controlling a hero to face the other hero...interesting idea! 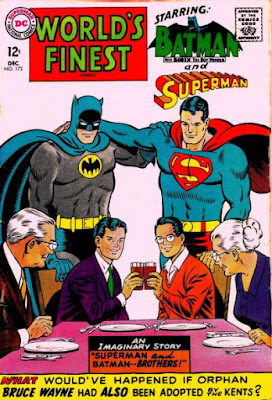 World's Finest Comics #172 (December, 1967) is a bit of a special case, as it is an imaginary story (but aren't they all) with "Superman and Batman...Brothers" by Jim Shooter, Curt Swan and George Klein.  This tale shows what happens if orphan Bruce Wayne was adopted by the Kents, and they battle Luthor in this new world, and we've covered this tale before...

...and isn't it nice to see young Clark Kent and Bruce Wayne happy together?


This tale found itself reprinted in DC's Greatest Imaginary Stories tradepaperback of 2005 and in black and white in Showcase Presents: World's Finest #3 of 2010. 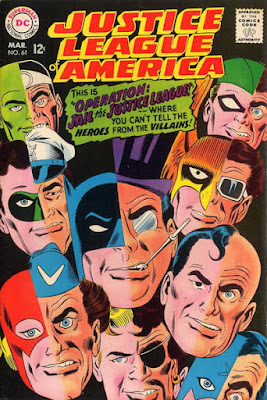 Justice League of America #61 (March, 1968) sees Luthor menacing the whole Justice League....or at least messing with Superman dressed as Green Arrow in "Operation: Jail The Justice League" by Gardner Fox, Mike Sekowsky and Sid Greene.  JLA foe Dr. Destiny used various foes of the individual members of the JLA (like Penguin for Batman, Captain Boomerang for Flash, Dr. Light for Martian Manhunter, Tattooed Man for Green Lantern, Cutlass Charlie for Aquaman, Mr. I.Q. for Hawkman and Jason Woodrue the Floronic Man for Atom; sadly, Wonder Woman and Snapper Carr had no individual foes to fight in this issue!).  Still, it did united the team, and was where most of the JLA learned that Green Arrow's name was Oliver Queen (though they didn't learn that he spent five years in hell...oh, wait, you've probably heard that somewhere.....).  Luthor usually wasn't available for titles outside of those edited by Mort Weisinger, as he didn't really share the Superman family of characters, but that hold he had was slowly breaking down.... 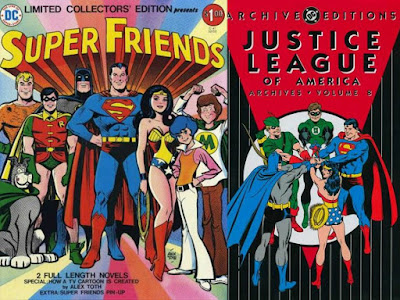 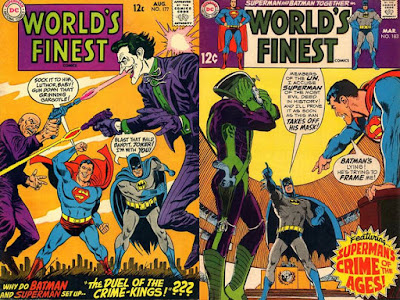