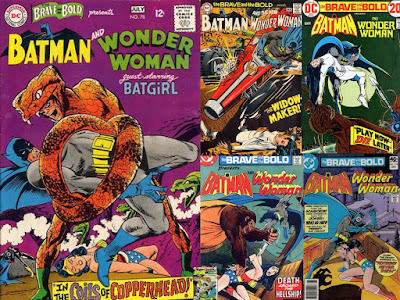 Back in the day, DC Comics didn't cross over with every issue, and team-ups were something special, with comic magazines devoted especially to pairing your favorite heroes.

Batman headlined one of these titles, the Brave and the Bold, and teamed up with Wonder Woman multiple times over B&B's history.

Here's the meetings of the Darknight Detective and the Amazing Amazon! 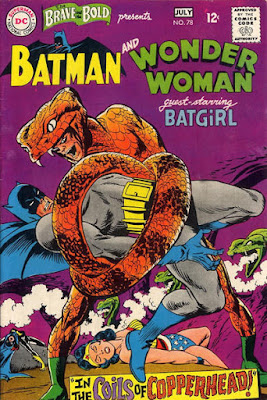 First up is their first pairing outside of the Justice League of America in Brave and the Bold #78 (June-July, 1968), which also included Batgirl, as they faced off "In The Coils Of The Copperhead" by writer Bob Haney and artist Bob Brown.  This tale introduces the readers to the new villain, the Copperhead, and Batman has to try to catch the thief, and deal with Wonder Woman and Batgirl, who are now competing for his affections (oh, the problems Batman used to have back in the day....). 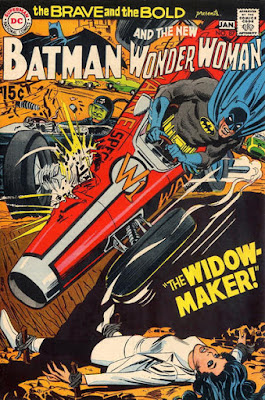 Wonder Woman had lost her powers in her own title, and took action as super-powerless action hero Diana Prince (armed with exceptional Amazonian fighting skills), and she worked with Batman in Brave and the Bold #87 (December-January, 1969/1970) facing off against racer Willi Van Dort in "The Widow-Maker" by writer/penciller Mike Sekowsky and inker Dick Giordano.  The two skilled human heroes worked well together....and won the race!


This story found itself reprinted in a collection of Diana Prince stories, the Diana Prince: Wonder Woman tradepaperback #2 of 2008 in color, as well as making it in black and white in Showcase Presents: The Brave and the Bold Batman Team-Ups #1 of 2007. 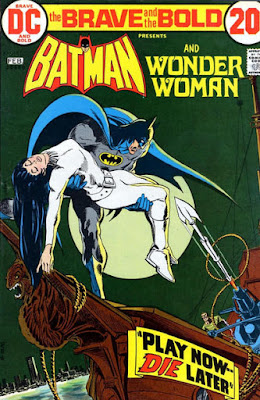 Batman and Diana worked together so well they did it again in Brave and the Bold #105 (January-February, 1973) with "Play Now...Die Later" by writer Bob Haney, and artist Jim Aparo, giving Jim a crack at drawing the beautiful Wonder Woman in her civilian guise.  The fight starts with a gang war in Gotham, with Batman asking for Diana's help with the Latin gangs, and leads to a battle in the country of San Sebastian, freeing the country from a brutal dictatorship with the help of revolutionaries.

This team up has been reprinted in the Diana Prince: Wonder Woman tradepaperback #4 of 2009 in color (as Diana soon got her powers and original costume back in her own title), and in the Legends of the Dark Knight: Jim Aparo hard cover book of 2012.as well as making it in black and white in Showcase Presents: The Brave and the Bold Batman Team-Ups #2 of 2008. 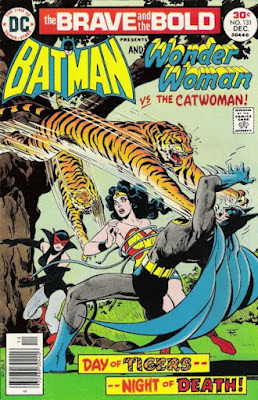 Fans who wanted to see Jim Aparo draw the classic Wonder Woman got their wish with Brave and the Bold #131 (December, 1976)...kind of.  The story "Take 7 Steps To....Wipe Out" (written by Bob Haney) even had Catwoman as the villain, but by this time, she had gone back to her purple outfit, and this story portrayed Selina as a killer (which she hadn't been in her previous Earth-1 tales), so this story was regulated to "Earth-B" (Bascially, DC editorial and fans found the story inconsistent with the character's as usually presented in the regular titles of the time).

You can read it yourself and see how much you like it, as it has been reprinted in the second volume of Legends of the Dark Knight: Jim Aparo hard cover book of 2013, as well as making it in black and white in Showcase Presents: The Brave and the Bold Batman Team-Ups #3 of 2009. 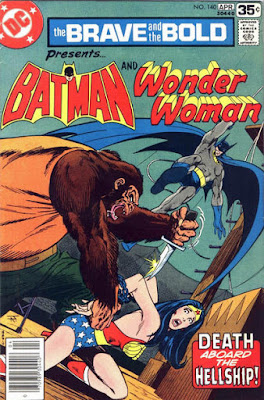 Bob Haney and Jim Aparo brought Wonder Woman back (and the "real", that is, Earth-1 version) in Brave and the Bold #140 (March-April, 1978) with the story "Dastardly Events Aboard the Hellship" with a wild tale!  This time, Batman and Wonder Woman took on wealthy industrial spy, Dimitrios, and his trained apes (which he used to steal a solar cell).

All these hijinks led to the crazy cover you see....hey, gorillas on covers use to sell comics, and both Batman and Wonder Woman had faced simians on their own, back in the day.


This tale was reprinted second Legends of the Dark Knight: Jim Aparo hard cover book of 2013. 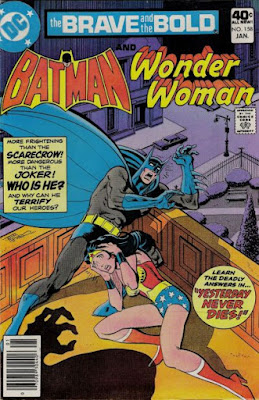 Last, but not least, of the Batman/Wonder Woman pairings is Brave and the Bold #158 (January, 1980) in "Yesterday Never Dies" by writer Gerry Conway and artist Jim Aparo.  This time, Batman and Wonder Woman faced off against old memories, and the French villain known as Flashback (also known as Deja Vu), who used a potion similar to that of the Scarecrow, which induces fearful memories in its victims, with Bruce Wayne dealing with the death of his parents, and Diana Prince dealing with the deceased at the time Steve Trevor, giving the heroes a chance to deal with some of their grief.


Flashback never returned, but this story should live again if we get a third volume of the  Legends of the Dark Knight: Jim Aparo hard cover book...

....but I hope you enjoyed this flashback to Batman/Wonder Woman tales, and look forward to looking back at the times Superman worked with Wonder Woman, and maybe even the 12 trials of Wonder Woman, where she was moderated by Superman, Batman and the rest of the JLA. 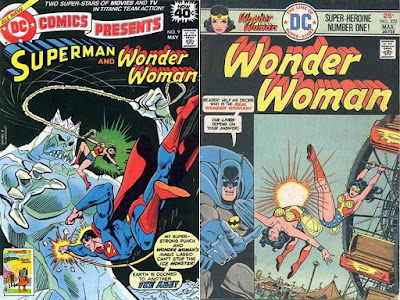