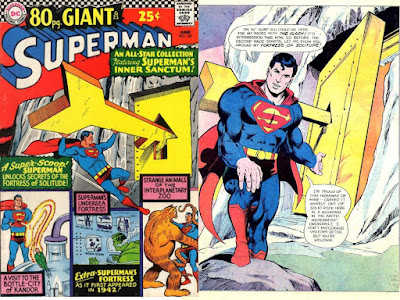 Back in Superman's Silver Age, his Fortress of Solitude was a big thing....
...so big, it got coverage in the Limited Collectors' Edition #C-48 (October-November, 1976), with this special six page feature, by E. Nelson Bridwell, Neal Adams and Dick Giordano (with the cover of Superman #187 from June, 1966 by Curt Swan and George Klein for perspective). 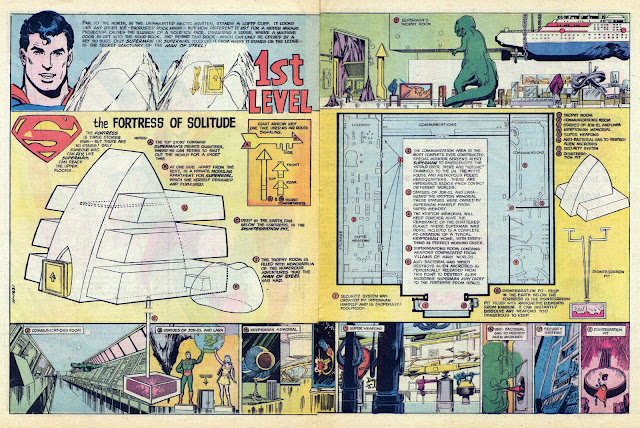 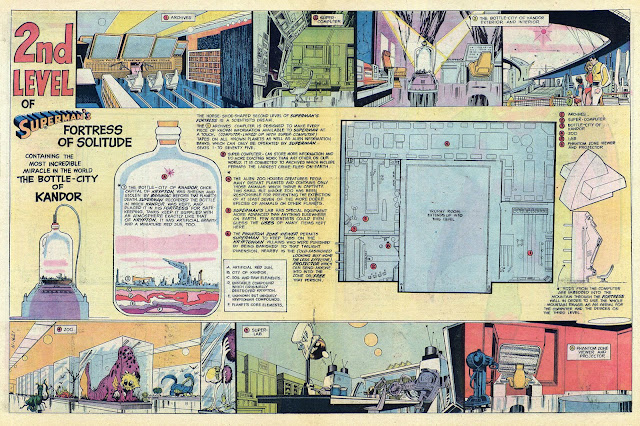 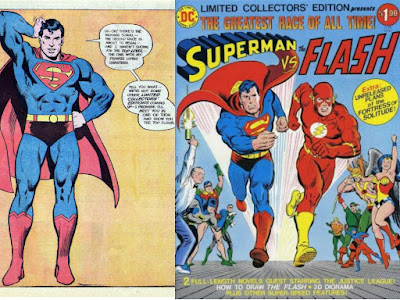 Basically, a place where Superman kept his stuff, including an interplanetary zoo and the bottle city of Kandor.  Sadly, that 3rd level tour never happened, even though there was a whole treasury dedicated to the Fortress as well in the Summer of 1981.  Here is where to find out more about Superman's races with the Flash (the main feature of the Limited Collectors' Edition). 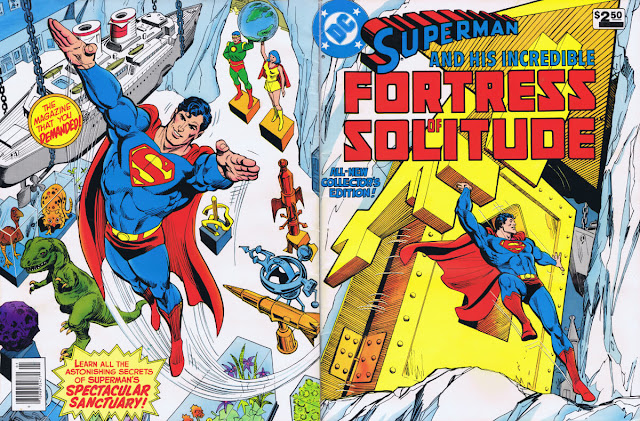 Posted by Dave's Not Here Comic Blog at 11:34 AM No comments: 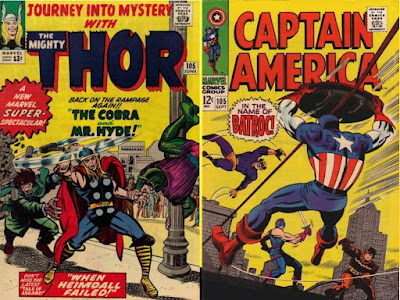 Celebrating the King, Jack Kirby, on what would have been his 105th birthday (August 28, 1917 to February 6, 1994), with two special covers of characters he had worked on for a long time, Thor and Captain America. 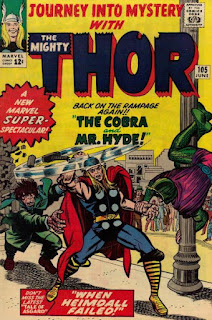 First up, Journey Into Mystery #105 (June, 1964), inked by Chic Stone, where Thor faced off with two of his deadlier foes, the Cobra and Mr. Hyde! 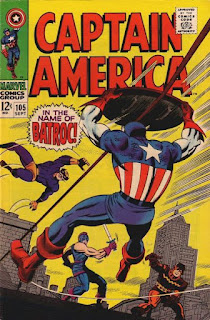 The second of these special issues is Captain America #105 (September, 1968), with inks by Dan Adkins (and alterations by John Romita Sr.), sees Batroc form his Brigade, with the Swordsman and Power Man as members. Not enough Kirby for you...here is more! 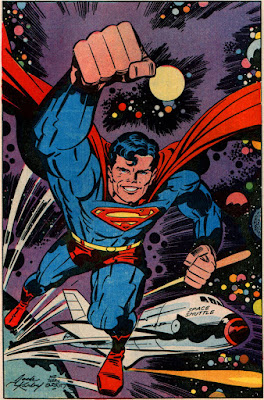 Celebrating the birthday of artist Terry Austin (August 23, 1952), with this special piece of art from Superman #400 (October, 1984), where Terry inked Jack Kirby!

Terry is usually known for his inking work....which is stellar...but he has done an occasional piece of art on his own. 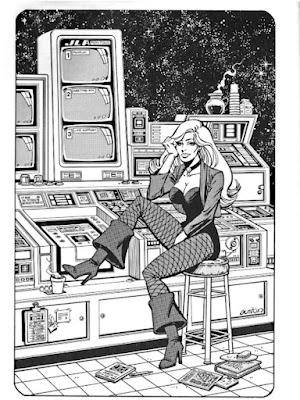 Here is Terry's version of Black Canary, serving a stint on monitor duty in the Justice League of America satellite.

Posted by Dave's Not Here Comic Blog at 12:21 PM No comments: 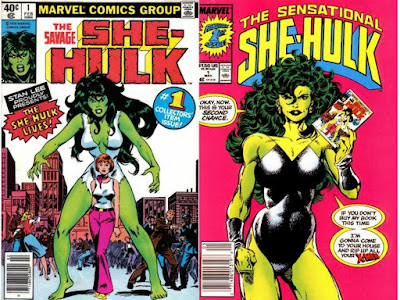 Likely readers remember the first cover with She-Hulk (Savage She-Hulk #1 from February, 1980 by John Buscema) or John Byrne's Sensational She-Hulk #1 (May, 1989), but how about these other She-Hulk firsts from the 1980s? 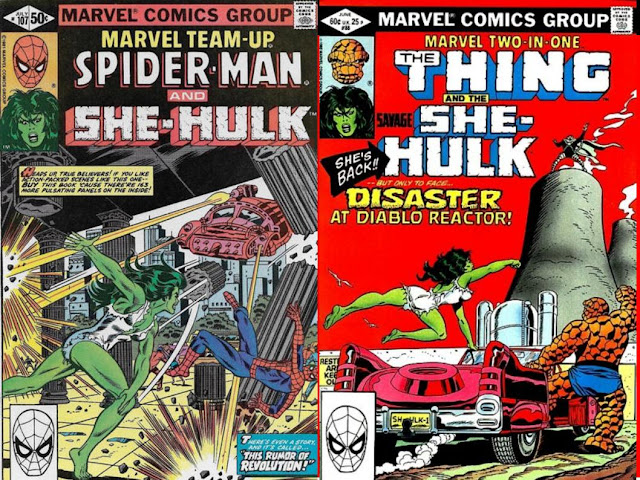 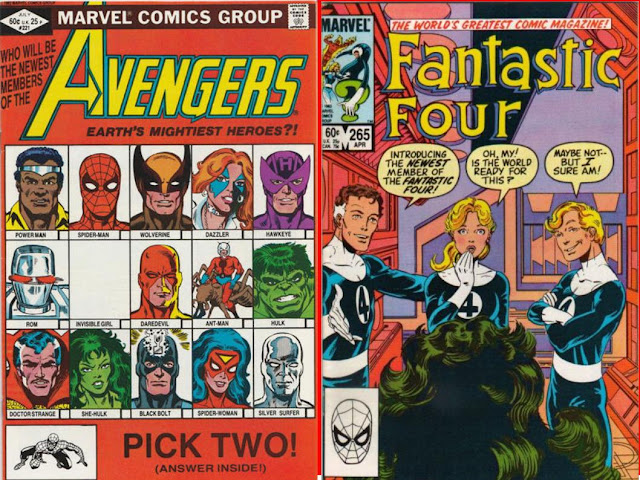 She-Hulk joins the Avengers and the Fantastic Four, with covers by Ed Hannigan and Joe Rubinstein, and John Byrne. 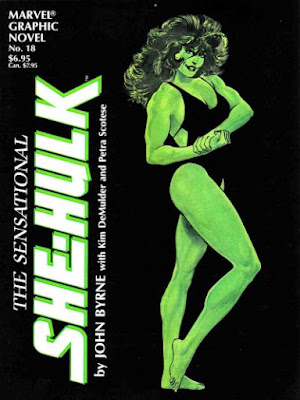 She-Hulk gets a shot on her own, with this cover by John Byrne, eventually leading to her own series.

A hard book to find in nice shape, due to that all black cover, but oh what a book!

She-Hulk In Ceremony from 1989 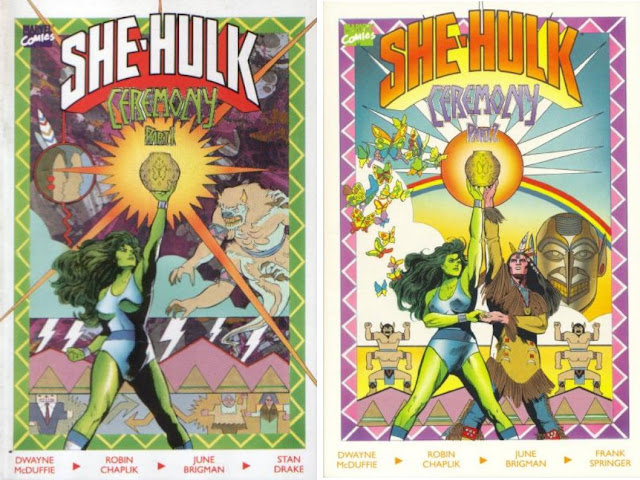 Covers by June Brigman and Stan Drake, ending the 1980s, with even more She-Hulk to come!

Posted by Dave's Not Here Comic Blog at 10:11 AM No comments: 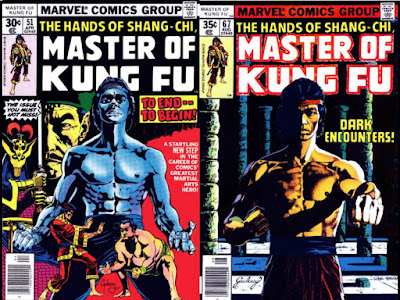 Known for his action style of art, especially on a run of Master of Kung Fu in the 1970s....yet, he only did four covers of that run featuring Shang-Chi! 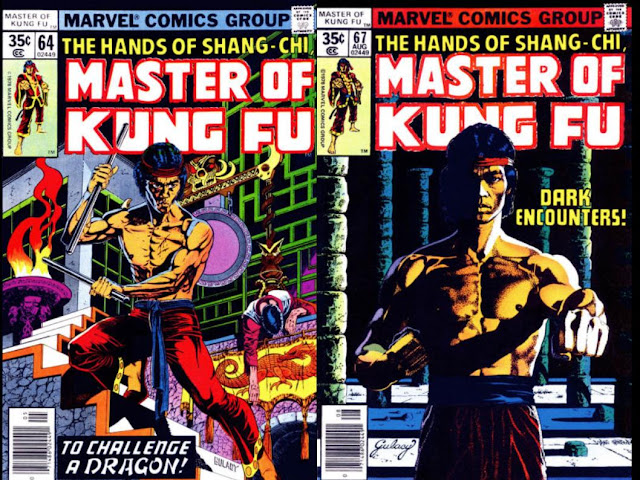 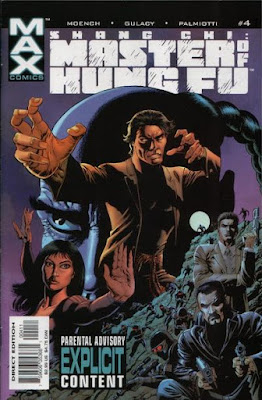 This was at least changed when he did all the covers for Shang-Chi's recent 6 issue mini-series from 2002/2003, collected in this one trade! 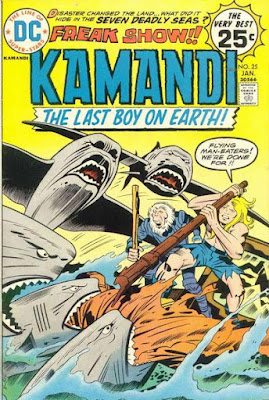 Just when you thought it was safe to go back to the beach...

...the sharks coming flying out of the water at you!

Yes, just one of the many dangers of the world After Disaster...

...that was the home of Jack Kirby's Kamandi, the last boy on Earth! 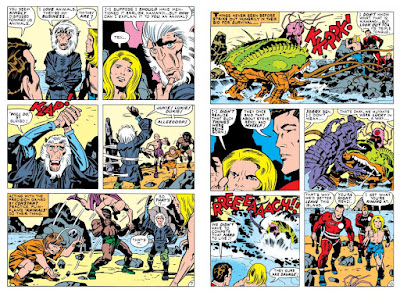 No, it was Kamandi and his new friend, speaking simian Flim-Flam (as well as his three trained humans: Jukie, Lukie and Dukie), who were surprised to see something rise out of the water of the island they crashed on....that of metallic mutants Ben Boxer, Steve and Renzi (former friends of Kamandi's). 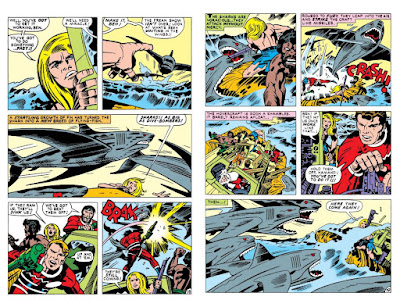 The lot set about to search the island for a vehicle which had survived the disaster that had befallen the world.  They did, after facing a few dangers, find a hovercraft, but even then, had to face an attack of flying sharks before they passed through the mists to their next adventure!

Check here to see a map of the world of Kamandi, and here to find out how the Earth ended up in disaster! 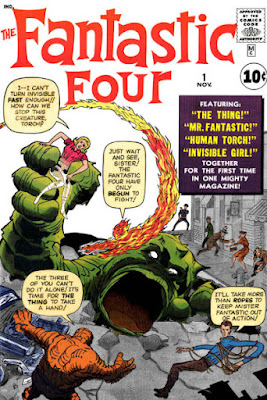 Celebrating the original release of Fantastic Four #1 (cover dated November, 1961), but released on August 8, 1961, with an incredible story detailing the origin and first case of the Fantastic Four as told by Stan Lee, Jack Kirby and George Klein....and kicking off Marvel Comics! 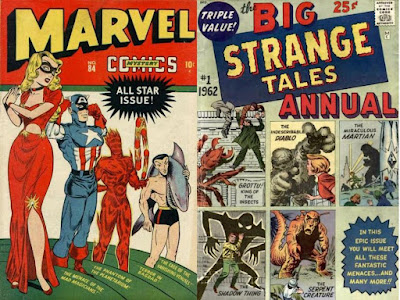 This issue, once considered the beginning of the Marvel Universe (though, later, Timely tales of Captain America, Human Torch, Sub-Mariner, the Blonde Phantom, Whizzer, Miss America, the Patriot, Venus and more were considered canon, as well as select tales from books like Strange Tales and Journey Into Mystery including tales of gorillas, robots, Zombies and Hydra) , it still is a milestone in Marvel history! 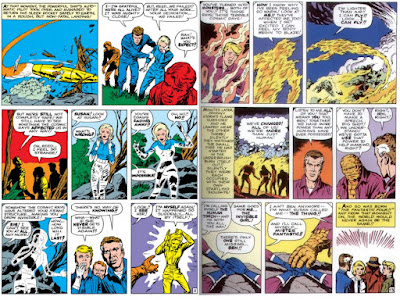 But, back to the Fantastic Four...in this first issue, we see scientist Reed Richards, his best friend pilot Ben Grimm, Reed's fiance Sue Storm and her brother, Johnny, take off in a spaceship (originally to be the first to reach the moon, later "updated" to be the first interstellar flight), wherein the crew is exposed to cosmic rays in their improperly shielded ship, and, after crash landing back on Earth, find they each have gained powers in line with their personalities, becoming the stretchable Mr. Fantastic, strong Thing, faded Invisible Girl and fiery Human Torch!  They gather together in this issue to battle the Mole Man, and his monsters....one of many menaces they face! 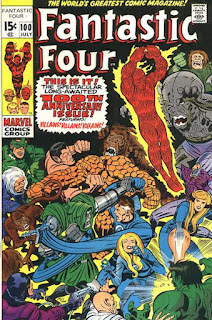 So this would continue, with over 100 issues of Lee and Kirby, and so many more after that (partially covered in this early index), helped found the Marvel Universe....and so many more adventures to come!

Posted by Dave's Not Here Comic Blog at 2:44 PM No comments: 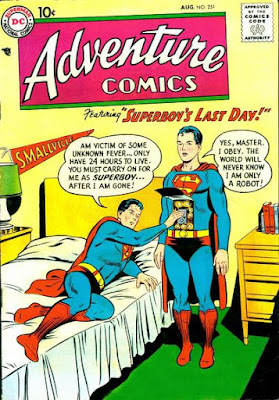 Back in the 1950s and 1960s, there was Kryptonite everywhere on Earth for Superman to encounter.

But, one of those encounters had to be the first!

So, let's travel back to the time when Superman was a boy in Smallville, and let young Clark Kent tell the tale of his first encounter with green Kryptonite under this Curt Swan/Stan Kaye cover! 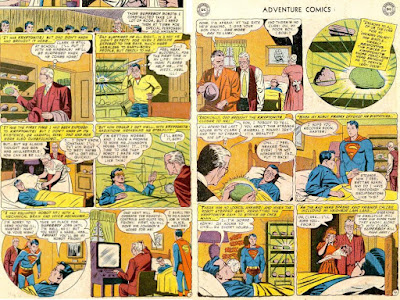 It was related in Adventure Comics #251 (August, 1958, by Otto Binder and George Papp), as a nostalgic Superboy related the tale of a day like any other day, as he worked on a geology project for school.  Pa Kent brought home a glowing green rock for Clark to see, yet, as Clark Kent suddenly developed his first illness when he came home, Pa forgot to tell him about it.  The illness would come and go as Superboy left the house, yet every time it came back even worse.  If not for one of Superboy's earliest robots (who was lead lined), Clark wouldn't have figured out it was the rock (which they would dub Kryptonite) that was causing his illness. 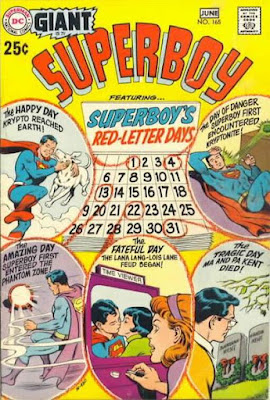 Oddly, the DC Calendar puts this event as happening on August 5th, yet, the calendar on the Curt Swan/Murphy Anderson Superboy #165 (May-June, 1970) has it as August 4th (take it as the day Clark got sick to when he found out it was the rock...), with the Kryptonite flashback being set for "seven years earlier", around the time of Adventure Comics #170.