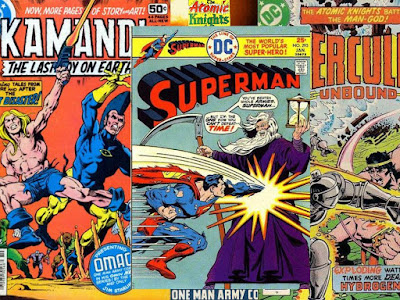 To be fair, it starts with Superman fighting Father Time, but, along the way, takes us on a trip through the "future"....

Still, looking back at the future has to start somewhere, so, let's start with Superman, beginning at almost the ending.....


Costume, Costume -- Who's Got The Costume? 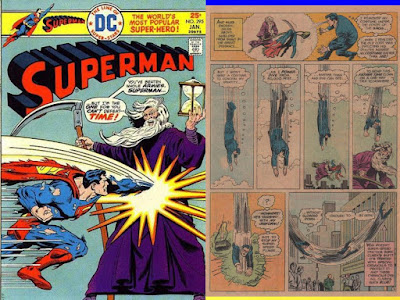 Superman #295 (January, 1976) by Elliot S. Maggin, Curt Swan and Robert Oksner (and cover by Ernie Chan), starts as many Superman issues do, with Superman foiling what he thinks is a new super villain called Father Time, who attacks him with a green energy coming from his scythe, but really has a larger plan that involves stealing Superman's super suit (Superman's main costume, made of Kryptonian fibers).  Superman tracks his costume (using the JLA signaling device in its belt buckle) to find it still in Metropolis, but Metropolis 1000 years in the future! 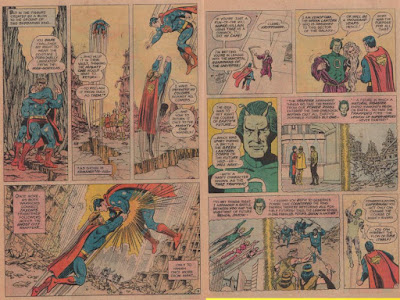 Superman travels through time to get there, but this isn't his usual Legion of Super-Heroes future, but instead, a world post-apocalypse, with buildings rotted for centuries, and savages roaming the streets, including one Jaxon the Mighty, who is wearing Superman's suit.  Superman battles Jaxon (who has powers, like Superman, and wants to protect the suit, having taken it recently from intelligent gorillas, to keep it for when "the Mighty One" returns).  Their battle rages, as the 20th Century Metropolis returns around them....and, with an exclamation, Jaxon realizes Superman was "the Mighty One", and their battle returns the group to 20th Century Metropolis. 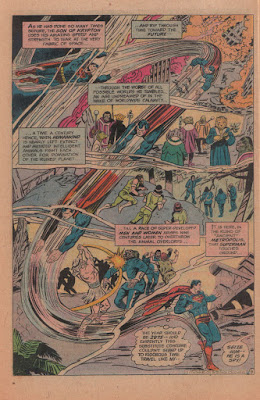 Superman gets his costume back as Father Time returns, and reveals himself to be Xenofobe, a 30th Century Green Lantern (contemporary of the Legion), who, with that time's Green Lantern Corps, had been battling the Time Trapper, who used their energy to block off every other future except the grim one Jaxon and his followers lived in.  Xenofobe left Superman, who then, as Clark Kent, wondered if Jaxon could have been a descendant of his and Lois Lane's.


But, what led to the Great Disaster and that horrible future?


That was the result of a collection of many alternate future titles DC had published over the years. 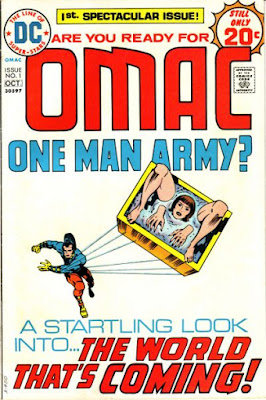 Starting before the world was in ruins, was OMAC #1 (September-October, 1974) by Jack Kirby and Mike Royer, and their "startling look into....THE WORLD THAT'S COMING!".


In that first issue, readers are introduced to perfectly average stock boy Buddy Blank, who was transformed by scientist Myron Forest into OMAC, the One Man Army Corps (a being whose density could be controlled, as well as energy manipulated around), by Brother Eye, an orbiting satellite housing an advanced computer.  Dr. Forest died, unable to replicate the experiment, so OMAC was the one soldier of the GPA (Global Peace Agency) to fight the evils that faced this new corporate dominated world. 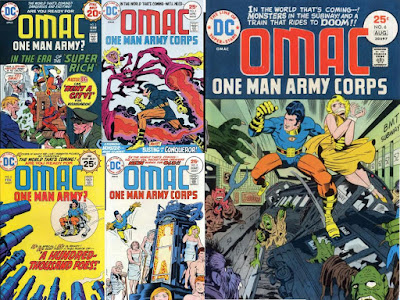 Those evils included Mr. Big and his assassins of Electric City, Marshall Kirovan Kafka and his mercenaries, and the Crime Cabal (and their body rejuvenation scheme), all events which kept OMAC and his Brother Eye busy....quite an impressive lot of dedicated foes OMAC had earned. 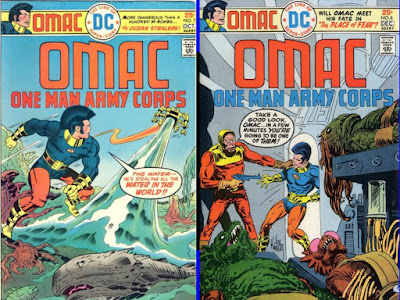 OMAC's battles against those menaces didn't prepare hm for the brilliant Dr. Sandor Skuba, who, while stealing water from the world (condensing it to super heavy blocks), also separated OMAC from Brother Eye, turning him back to Buddy Blank, leaving Buddy helpless on a small deserted island as Brother Eye was encased in asteroids.

That's where OMAC was left as the Superman issue came out. 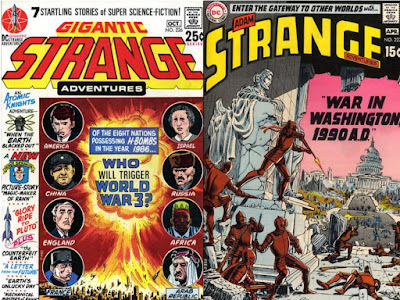 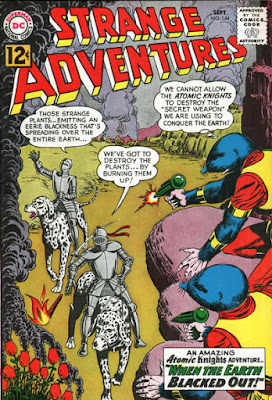 This was the world Sgt. Gardner Grayle (the perfectly average soldier) woke up in, in 1990, finding himself allies in school teacher Douglas Herald, his sister Marene, twin soldiers Hollis and Wayne Hobard and scientist Bryndon Smith in the town of Durvale.  This group, facing the tyrant and hoarder Black Baron, found old suits of armor that were also resistant to radiation and energy weapons, took them and became the Atomic Knights, determined to survive in this ruined world, facing other tyrants, mutated creatures, devolved humans, time transported Atlanteans, and even Mole Men (whose desire to conquer Earth sent the signal on October 9, 1985 in Strange Adventures #144 of September, 1962, that supposedly started WWIII!).

Their original adventures ended in Strange Adventures #160 (January, 1964), helping a group of orphan boys in this ravaged world of 1992. 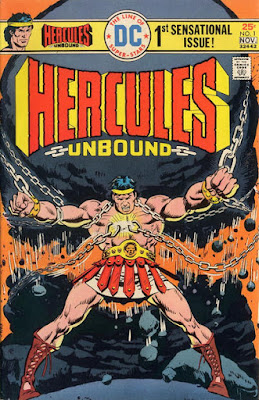 This particular version of Hercules premiered in Hercules Unbound #1 (October-November, 1975) by Gerry Conway, Jose Luis Garcia-Lopez and Wally Wood (with a cover by Garcia-Lopez), with Hercules breaking free of his chains on an island prison four weeks after the start of World War III, and being found by a sailing blind boy named Kevin and his dog Basil.  Kevin explained how World War III started with a nuclear blast in Greece, where his brother died, then the survivors huddled for two weeks to avoid radiation (oh, the innocent 1970s), then Kevin and Basil had to run to escape mutated humans (and set sail....thinking that his sightless self would die on sea, but luckily found by Hercules).  Ares, the god of war, had manipulated the humans to be ready for war, and one nuclear bomb was enough to start it. 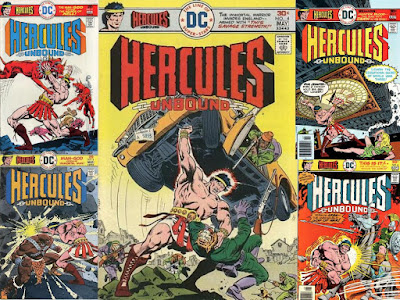 The unlikely allies found others over months, including American model Jennifer Monroe (in France, who was quite resourceful, though claiming to be no Wonder Woman), and faced other gods of Olympus, mutated humans like Hunter Blood, animals mutated into humanoid forms by Cortexin, Lady Sims and her robotic constructs who used vehicles taken from other times (and may have sent the first nuclear bomb back to October, 1985 in Greece), all of which must have taken some time.... 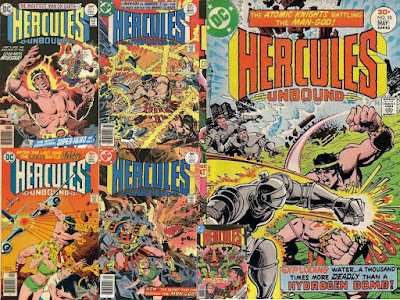 ....perhaps some odd help from blind Kevin suddenly being able to fly a plane (!!!) and taking the group from Europe to America, perhaps going through a small time warp thanks to Lady Sims).  Finding one of the Knights (Bryndon) replaced by an energy creature, the Knights had been trying to restore the dense water bricks of Dr. Skuba...and Hercules aided in this, as well as defeating the energy creature, getting a new armor forged in a Detroit auto plant in the next issue, and finding out that one of his own was possessed by the anti-Ares, one of a group of duplicate gods held by the chains Hercules broke back in that first issue....leaving Hercules and his unaffected companions to rebuild the world in 1992 when the series ended with Hercules Unbound #12 (August-September, 1977). 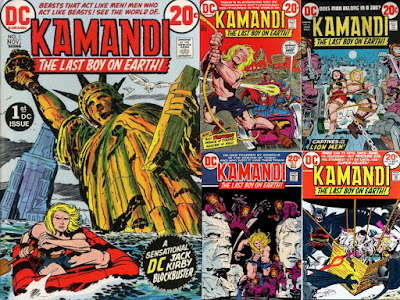 The world didn't recover so well from the Great Disaster, as many years later in a supposedly safe bunker in New York, Command D, the boy, Kamandi, was sent into this world as his grandfather was killed by a pack of humanoid wolves in Kamandi #1 (October-November, 1972) by Jack Kirby and Mike Royer, making Kamandi the last boy on Earth! 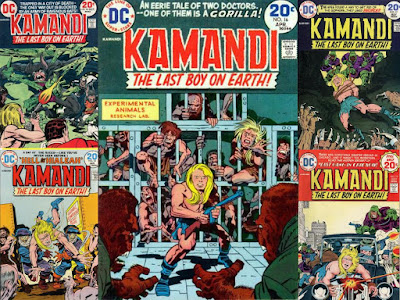 As he traversed this wild new world, Kamandi found friends such as metal mutate Ben Boxer, scientist dog Dr. Canus and mute girl Flower, finding out that it was a substance called Cortexin had helped mutate regular animals into human form (as well as dumbing down average humans, all in a 1974 issue of Kamandi....set in his timeline, of course). 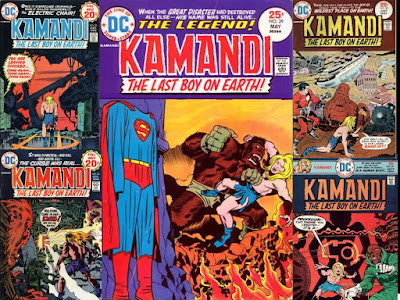 Kamandi even found Superman's Kryptonian costume, guarded over by gorilla guards in Kamandi #29 (May, 1975) by Jack Kirby and D. Bruce Berry, waiting for "the Mighty One"....which (in real time) was soon followed up by the Superman story which started all this! 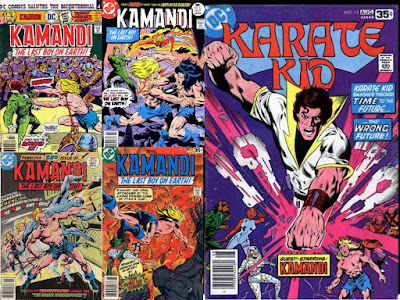 Sadly, Jack Kirby left DC (and Kamandi), and later issues of the series introduced more allies, including another mute girl, Spirit, and an alien lady named Pyra, and had tied Kamandi and his Great Disaster into the OMAC series, by making OMAC Kamandi's grandfather!  Kamandi even ran into Karate Kid from the Legion of Super-Heroes, time-tossed from his own timeline thanks to help from the Lord of Time and Major Disaster. 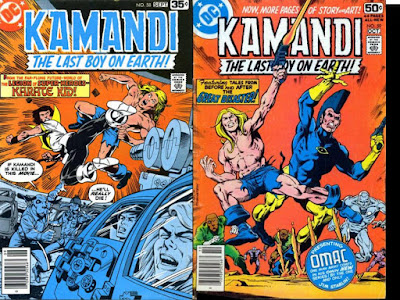 Kamandi's last published issue (Kamandi #59 of September-October, 1978) even had an OMAC back up (following up on his adventures after surviving the island destruction but before the Great Disaster). which sadly made the pairing of Kamandi's and OMAC's world a little harder..... 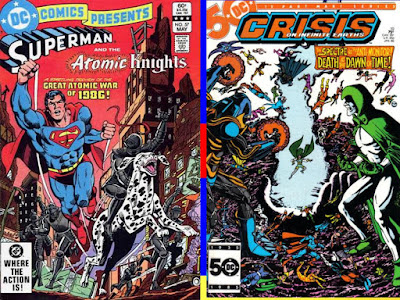 ....but not as bad as when an issue of DC Comics Presents with Superman claimed the Atomic Knights were only a simulation in Gardner Grayle's mind....but, that revelation (and Superman's meetings with OMAC and Kamandi, and Batman's meetings with Kamandi before the Crisis On Infinite Earths, where all these futures changed at the Dawn Of Time with issue #10, which came out in October, 1986 - with no WWIII) are a story for a future time!