Batman And The Outsiders Meet The New Teen Titans 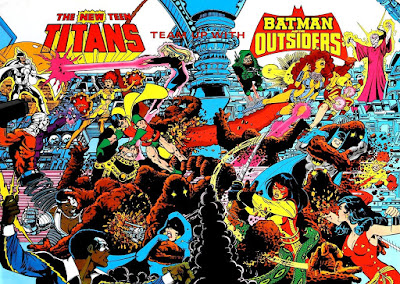 Along time ago, before the internet and digital downloads, one would look into the window of a comic shop and see posters of upcoming events....

...one such as this wonderful poster by George Perez and Jim Aparo, promising the excitement of a meeting of the New Teen Titans and Batman and the Outsiders!

This happened in an issue of each of their series....as follows! 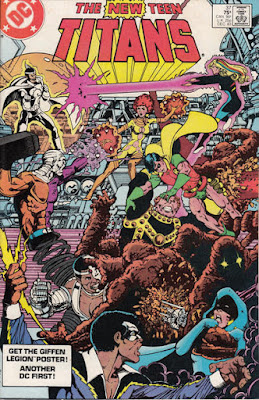 Starting the crossover fun was New Teen Titans #37 (December, 1983) by Marv Wolfman, George Perez and Romeo Tanghal....with this half of a connected cover by George Perez (one of the earliest examples of this trick).


The issue starts out with Gizmo, one of the members of the Fearsome Five, helping to start a prison break for the other members of the team...matter manipulating Shimmer; her brother, super strong Mammoth; devious Dr. Light (former JLA and Teen Titan foe) and psionic Psimon.  These villains have a plan to increase their power, and plan to use scientist Dr. Helga Jace to help (as she had helped Shimmer and Mammoth in their past, being an expert on metahumans). 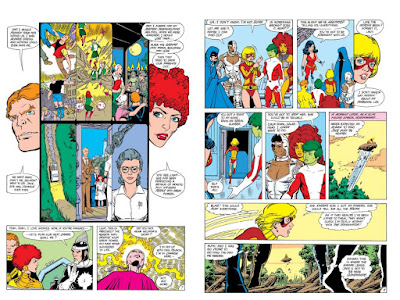 Meanwhile, in the Titans Tower; Kid Flash, Wonder Girl, Changeling, Cyborg, Starfire and Raven were finishing a meeting and dealing with newest member, Terra (matter manipulator), when Terra got a mysterious signal (of much distress to her, as she immediately goes off because of it....foiling her secret plans to get more information on the Titans, as Terra is a secret agent for Deathstroke the Terminator). 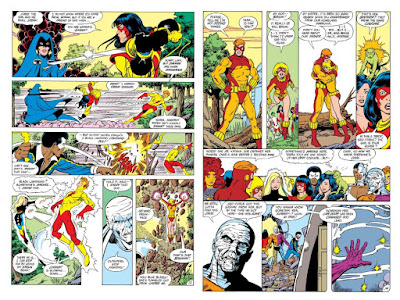 Her alarm went off signalling the kidnapping of Dr. Helga Jace, and Terra arrives at the doctor's home, only to find Metamorpho, Black Lightning, Halo and Katana there....and Terra attacks!  The group fight her as the Titans start to arrive (usually team up trope), but then Kid Flash and Wonder Girl recognize Metamorpho and Black Lightning (and vice versa), so the fighting stops.

Just in time, as Geo-Force arrives....and greets Terra as his sister, Tara Markov!  Seems Tara had gotten her Earth powers a year before, and Geo-Force was looking for her,  but hadn't found her. The teams unite and realize they must look for the villains, the Fearsome Five, who took Jace (and both teams contact their leaders... ...Robin/Dick Grayson of the Titans and Batman/Bruce Wayne of the Outsiders.. ..who are meeting at Wayne Manor to discuss recent problems the two are having, with Jason Todd in the background, and Alfred Pennyworth letting them know their teams need them).

The entirety of both teams unite at Titans Tower, where they search for clues to find the Fearsome Five (getting notice that they are experimenting on homeless people....turning them into mud men).  The teams (with Batman taking over as leader, much to Robin's dismay), go to a Gotham island where the Fearsome Five are, but....the villains and their mutated men of the Mud Pack attack, and the villains flee....and blow up the island....sinking the heroes..... 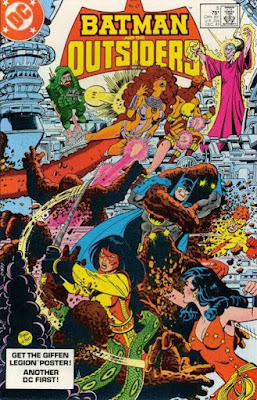 Batman And The Outsiders #5 (December, 1983) came out soon after, by Mike W. Barr and Jim Aparo (with Marv Wolfman as a co-plotter and cover by George Perez and Jim Aparo, giving the second half of a connected cover...letting you know these two issues connected in story, a piece occasionally forgotten in modern connected covers).

It starts with our heroes sinking in light of the explosion they just faced, with Batman feeling concerned because he was counting on Robin and the Outsiders to take care of Gotham should he die, and Robin thinking they wouldn't be in this predicament had he led instead....thankfully, Terra and Geo-Force work together and save the heroes from a watery grave, saving themselves and Dr. Jace. 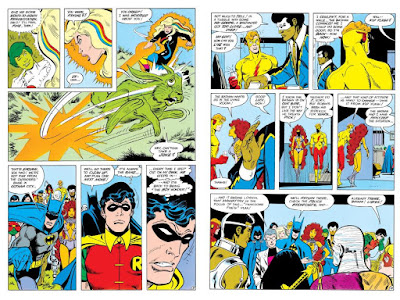 Batman takes charge (as he did when working with Titans in Brave and the Bold), suggesting they go to the closer Outsiders headquarters under Wayne Foundation (though the Outsiders are unaware of Batman's true identity, unlike the Titans of Robin's).  Wonder Girl and Halo talk of their lack of knowledge of their parents' identities, and Kid Flash and Black Lightning talk of how they both tried to walk away from being heroes but came back, as Batman again takes dominance of the two teams.

Meanwhile, the villains have a falling out, as Psimon takes over his team, directing the others against Dr. Light, who escapes....leading to his being caught by the heroes.  They find out the villains had a plan of taking over New York City with a mind control device, and with Dr. Jace's help, find a way to immunize the heroes against it. 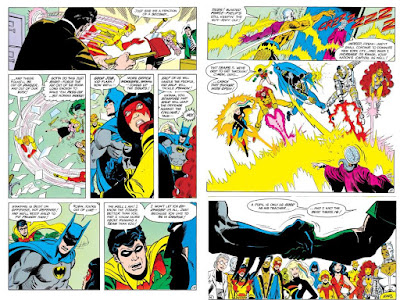 The Fearsome Five (less one) were using the Empire State Building to center their device and succeed in taking New York....as the heroes arrive to stop them, with Batman trying to divide the teams when Robin speaks up, saying Batman's orders will likely get them killed, and comes up with a division of the teams that takes advantage of his knowledge and experience, which does allow them to defeat the villains, and Batman and Robin finally make peace at the end (as Terra and Geo-Force plan to unite their family again sometime soon....). 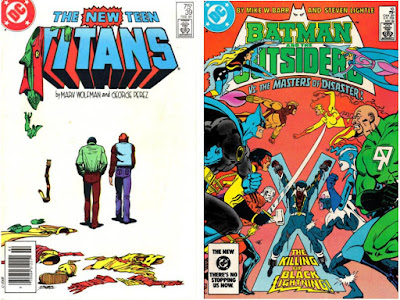 All of this lays out a plan for future issues of both series, as Dick Grayson retires as Robin (and Wally West retires as Kid Flash), with Dick soon taking on the identity of Nightwing, as Donna Troy/Wonder Girl finds her real family (with help from Dick); and Black Lightning is confronted by the Masters of Disaster (and the reason he lost his powers for a time), and Halo discovers her true identity (and origins of her powers), with Geo-Force having to deal with fallout from more revelations and problems from his sister, Terra.

Psimon and the Fearsome Five return right before the Crisis On Infinite Earths as well, as the Titans and Outsiders will work together then too. 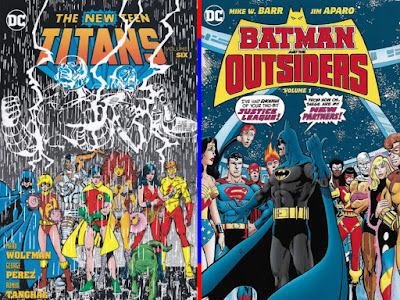 Read these yourself in New Teen Titans Volume 6 Tradepaperback of 2017 (including Dick and Wally's retirement) or Batman and the Outsiders Volume 1 Hardcover of 2017 (including the teams' origins, more on Markovia and Black Lightning's power problems)....a shameless bit of advertisement for DC, who brought readers these classic tales! 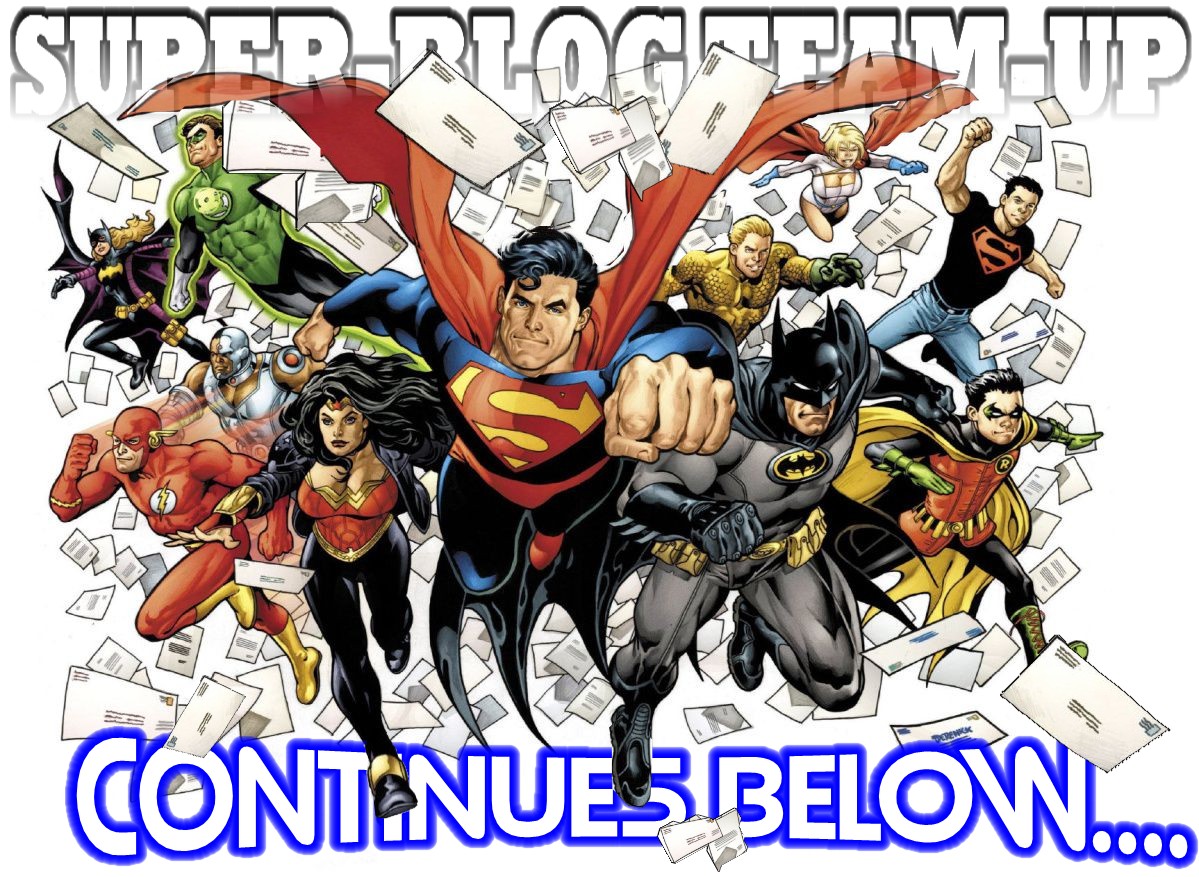 For those interested in comic marketing, and some of the ways done to make comics appealing to readers and give us some things to follow, check out my fellow Super Blog Team Up members blogs', as our assignment was to cover gimmicks that sell comics, focusing on the later years of Chromium...wherein covers were shiny to sell comics! 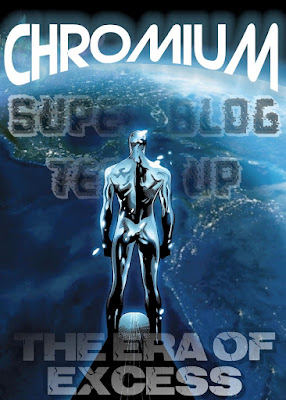 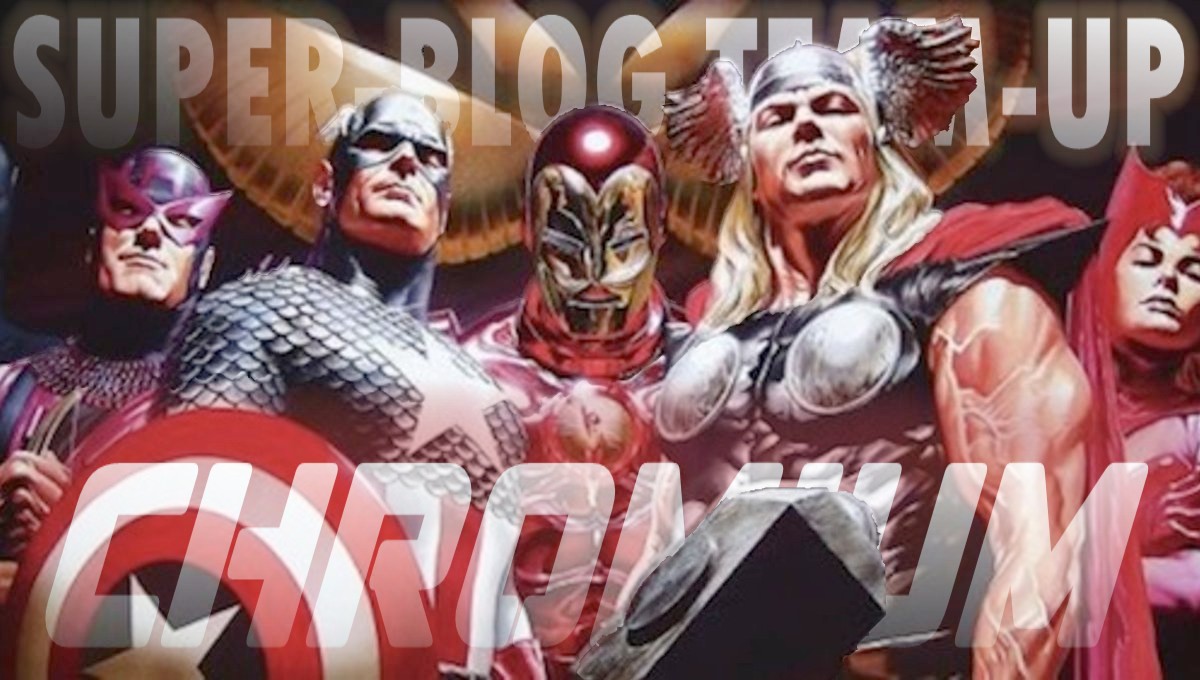 Between The Pages: Guerrilla Marketing 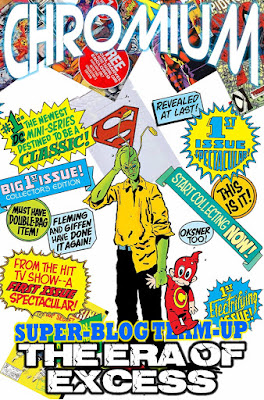 When It Was Cool: Polybags!

In My Not So Humble Opinion: Pop-Up Cover Force Works 1


I thank all my regular readers for also checking out all these great members of the Super-Blog Team-Up family, welcome new readers brought to me because of the SBTU, and thanks to everyone for a love of comics as well all team up well!!