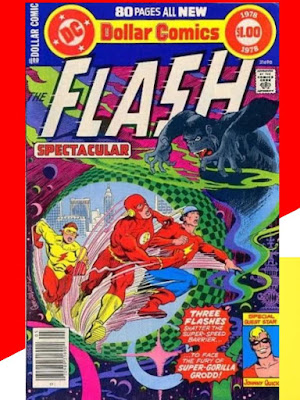 This time the Flash team up doesn't happen within the regular Flash issue, but instead in a "Flash Spectacular", otherwise known as DC Special Series #11 (May, 1978), written by Cary Bates and with a cover by Jose Luis Garcia-Lopez, showing the two Flashes (Barry Allen and Jay Garrick) as well as Kid Flash (Wally West) and even other speedster Johnny Quick and the villain of the piece....Gorilla Grodd, all going "Beyond The Super-Speed Barrier!".


Now, the book was split into chapters, each done by a different artist, focusing on a different character, so, here's the breakdown.... 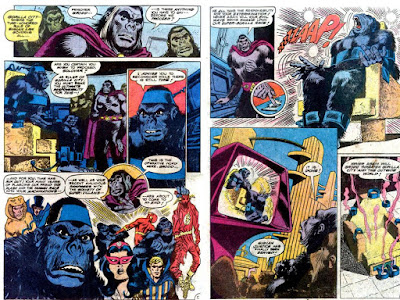 Starting off with art by Irv Novick and Joe Giella, there's a big event in Gorilla City!  Notorious criminal, Gorilla Grodd, fresh off of causing trouble for most of Earth (including Gorilla City) with the Secret Society of Super-Villains, King Solovar and the High Council of Gorilla City execute Grodd for his crimes. 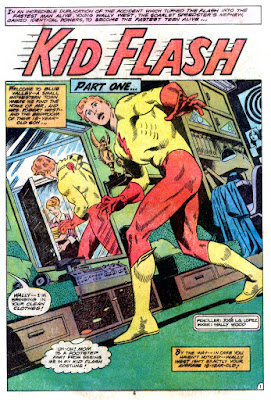 Starting the main story with Jose Luis Garcia-Lopez and Wally Wood, as they draw Wally West...Kid Flash!  Wally is getting ready for his graduation from high school, when his mom, Mary, almost makes the discovery of her life....Wally in his Kid Flash outfit!

A little super speed saves the day, but enough of hanging around his home in Blue Valley....Wally heads out with his girlfriend, Leslie (she only appears in this issue)....

....and she nearly discovers his identity as well!  Wally's dog, Lightning, takes off with his accidentally released costume (all distracting Wally from what Leslie has been saying), so after getting his costume, Wally finds Leslie leaving on his bike...at super speed! 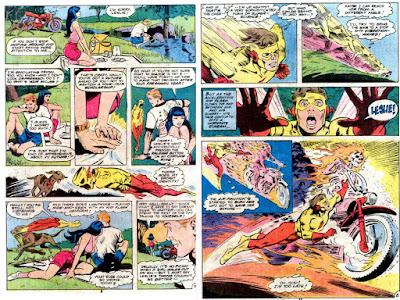 Dangerous super speed as well, so he goes after her as Kid Flash, watching her burn up and hitting a speed he had rarely reached before getting a dizzying effect...and, as he comes back to Blue Valley, finds Leslie, hitchhiking to get home (as the Leslie he was following was an illusion).  There's also a mysterious simian with a ray gun watching....what's up with that?

Back at the West home, Wally, in his Kid Flash costume, has something he decides to tell his parents (his Kid Flash identity....). 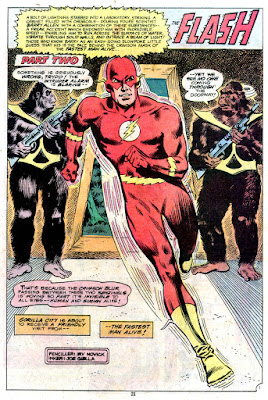 Next chapter by Irv Novick and Joe Giella sees Flash (Barry Allen) arriving at Gorilla City in Africa, finding out from Solovar of how they executed Grodd, because the High Council voted to disperse Grodd's atoms to another dimension (instead of just putting him in an improved Exo-Cube cell as Solovar wanted).

Barry, accepting he'll never have to face Grodd again, leaves Gorilla City at 7:55 am for his job as a police scientist in Central  City....at 8 am!

(Plenty of time for the fastest man alive!).

Barry even has time to prevent a car accident (with his new assistant, Patty Spivot) and still be on time. 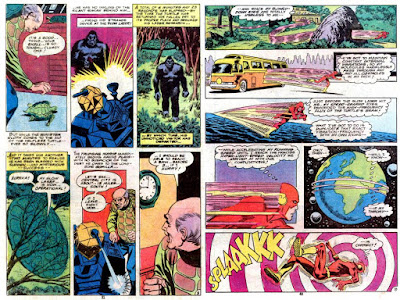 Elsewhere in Central City, Barry's foe from his first appearance, the Turtle, is working on a slow laser, which he will use on the citizens of the city...if he can get it to work!  That mysterious simian shows up again, training his ray gun on the device....and, when the Turtle checks it...finds it now works.

The Turtle gets to rob a bank (eventually), drawing the Flash in...and he hits Flash with his slow laser in the eyes.  This seems to give the Turtle (and everyone else in Central City) super speed?  Closing his eyes, Flash turns back into Barry Allen, and is luckily found by his wife, Iris. 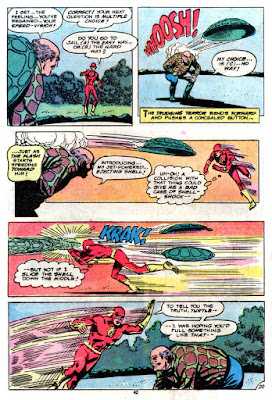 At home, Barry and Iris figure out that the Turtle's ray took away Flash's speed vision, and find that he needs to reach a certain speed to knock loose the ray's affects and return his vision to normal.

So a quick jaunt around the Earth (hitting a dizzying speed as well), and Flash can see again....and Barry is ready to capture the Turtle!


At home, Barry and Iris finally figure out the wedding gift to give to Patty Spivot and her soon to be husband, David....lovebirds!

Though, in light of this recent case, Iris suggests turtle doves! 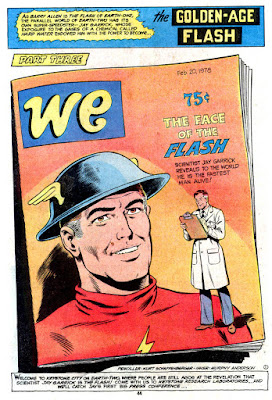 Over on Earth-2, with art by Kurt Schaffenberger and Murphy Anderson, Jay Garrick of the Keystone Research Laboratories is revealing his secret identity as the Flash to the world.

As reporters grill him on his new life (because he still plans to be both Flash and a scientist), Johnny Chambers and Tubby Watts of Sees-All Tells All Video just arrive (a little late), and are just in time to witness an accident that draws scientist Jay Garrick into becoming the Flash (and Johnny to change to his secret identity as super speedster with a formula....Johnny Quick!).

But, that mysterious simian and his ray gun are doing what here on Earth-2? 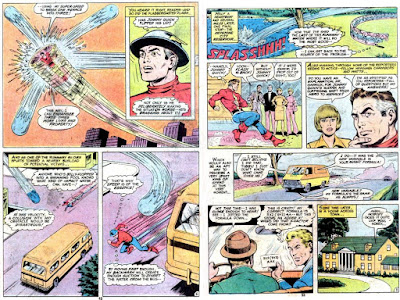 Flash tries to stop the runaway water blob...but Johnny only wants to make it worse?  Flash stops the problem, even as Johnny wonders why he acted the way he did (but Tubby found an x-factor...that of a new X in Johnny's speed formula!).

Johnny goes to Jay's house to apologize, but (thanks to that mysterious simian) says the wrong formula, and kidnaps Jay's wife, Joan!  Flash and Johnny Quick battle, and (after hitting a dizzying speed), Flash defeats Johnny....who seems to be cured of his formula problem.....

...but what is that mysterious simian doing monkeying around with the Flashes? 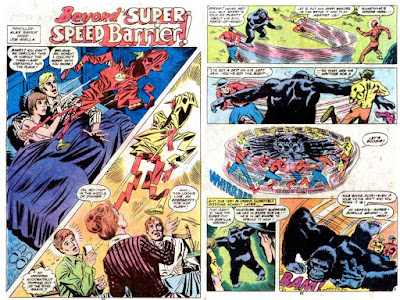 Finally, Alex Saviuk and Joe Giella provide the team-up part, when both Barry and Wally find their costumes activate from their rings...and the two head to an open field where they meet with Jay...all under the control of the mysterious simian, who Wally and Jay assume is Grodd, and quickly defeat him.... 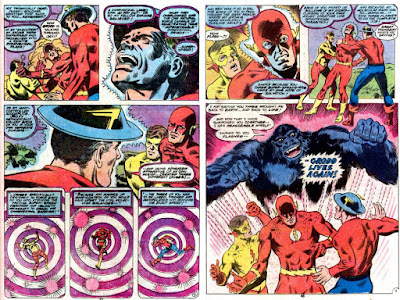 The Flashes find out Grodd has possesses Council member Jroyy, and then uses the other Flashes to tell Barry his plan....(proving Grodd wasn't dead, BTW)... ..manipulating them all to reach a dizzying speed, and pull molecules of Grodd back from that other dimension they reached...all so.... 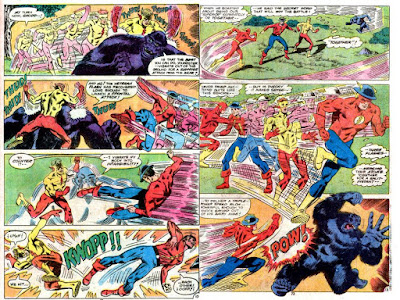 The three Flashes work together, but find it hard to defeat Grodd, now that he has speed as well as his mind over matter powers.  Barry comes up with a desperate idea...combining with the other two Flashes, hoping that triple Flash powers can defeat Grodd!  It works, and the Flashes get Grodd back to Gorilla City, where he gets to try out Solovar's Exo Cube. 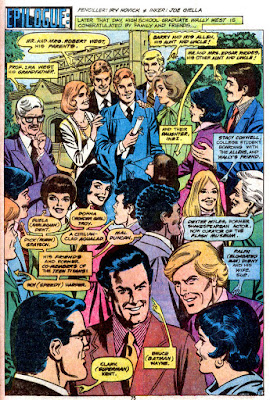 Now, for Wally's graduation, by Irv Novick and Joe Giella.  A few guests show up (like the Teen Titans and Elongated Man)....but sad the next, as Wally lets Barry know that he'll still be Kid Flash at college, but will give it up after he graduates that!

All that, and a couple of text pages on Flash's Rogue's Gallery.  A pretty spectacular issue, showing quite a few changes for the lives of the Flashes....all without a multi-issue cross over, or even more than the one Crisis (but, more Crises are in the future for the Flashes; as Jay and Barry discuss Jay's life change in the sixteenth JLA/JSA team-up, and Wally has to get use to not being in the Teen Titans as their 1970s run just ended with a telling of the team's establishing adventure!).