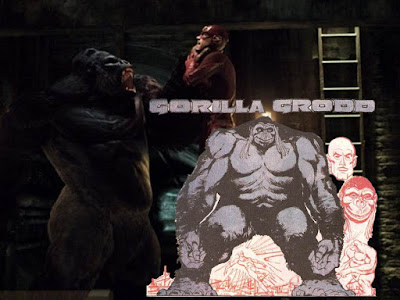 Gorilla Grodd was a telepathic gorilla from Gorilla City in Africa, bend on taking the "force of mind" power from the leader of that peaceful city, Solovar....and only the Flash stood in his way.

A little different than the experimented animal shown on CW's Flash....so, let's stop monkeying around and take a look at the comic history of Gorilla Grodd! 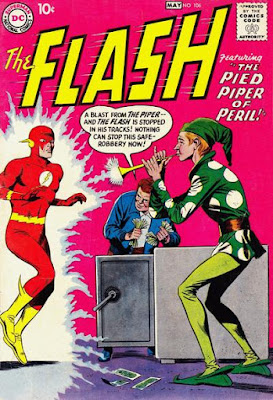 Flash #106 (April-May, 1959) was Grodd's first appearance, and this story by John Broome and Carmine Infantino introduced the readers to Grodd and Solovar, as well as the rest of the intelligent apes of Gorilla City, as Flash followed around a strange vehicle speeding around Central City, and tried to help an actor friend of his (Fred Pearson, who thought he was wandering the streets at night in a gorilla costume!).

Such were the simple beginnings of Gorilla Grodd...and it seems odd that he wasn't featured on any of his earliest covers, as gorillas on comic covers were all the rage at this time. 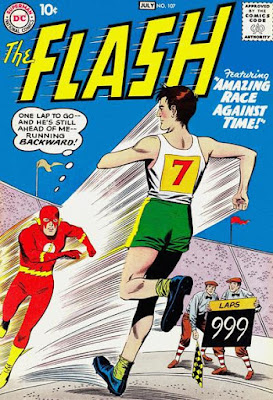 Flash #107 (June-July, 1959, also by John Broome and Carmine Infantino) has Solovar contacting Flash from Gorilla City (that we learn is hidden behind a vibrational field), letting Barry know that Grodd retained some of his "force of mind", and that the evil ape was hiding in the underground land of bird-people (whom Grodd has under his control).


Grodd is also developing a "devolutionizer ray" which he plans to use against his foes; this is one of many super devices that Grodd has come up with over the years...

...and change seems to be a constant theme in Grodd's stories as well. 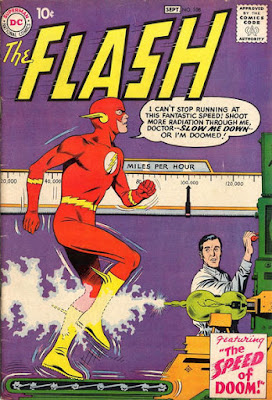 Flash #108 (August-September, 1959, again by John Broome and Carmine Infantino) is the third of the original Grodd trilogy, where Grodd escapes Gorilla City thanks to his quadromobile, and uses his technology on himself to become a normal looking human (with a super-evolved brain).


Soon after, back in Central City, Flash is up for the man of the year award, with only new millionaire, Drew Drowden, to compete against him.  Drowden made a fortune from stocks and set up a laboratory (that he is secretly using to develop the powers of mind over matter for himself).


Flash investigates and finds out that Drowden is Grodd! 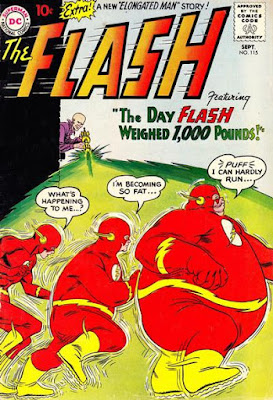 Flash #115 (September, 1960, by Broome and Infantino) deals with the death of Grodd, or at least that's what Solovar believes when he tells the Flash that he's discovered Grodd's dead body in a Gorilla City prison cell.  Grodd has really developed a pill that allows his mind to leave his body, and Grodd has taken over the body of William Dawson, who gets a job training chimps (who he uses to steal for him).


Flash catches the chimps and looks for Dawson, who bombards Flash in a ray that expands his size, and gives Flash amnesia, so that he ends up in Dawson's sideshow!


Flash figures out who he is and captures Dawson, but doesn't know of his simian beginnings.


The Reign Of The Super-Gorilla 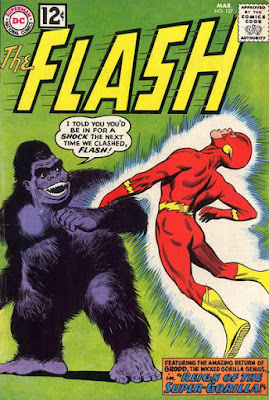 Flash #127 (March, 1962, by John Broome and Carmine Infantino) finds Grodd on his first cover in gorilla form...as William Dawson is released from prison, transforms to gorilla form, and returns to his lab in Africa with a new plan...to marry his love, female gorilla Boka.


So, Grodd creates a machine that makes everyone love him, marries Boka and takes over Gorilla City.


Grodd then heads to Central City, where his new power makes Flash endorse his foe for governor!  Flash finds out the limit to Grodd's new power and stops Grodd.


The Gauntlet Of Super-Villains 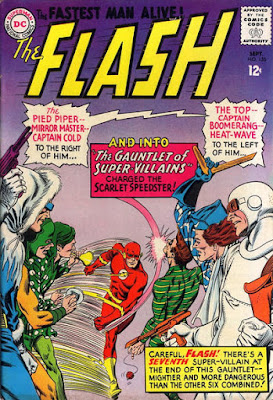 Flash #155 (September, 1965 by John Broome and Carmine Infantino) is an issue that keeps Flash running around...as his foes (Captain Cold, Mirror Master, Pied Piper, Captain Boomerang, the Top and Heat Wave; the original Rogue's Gallery) escape prison via teleportation and team up to battle against him!

Flash also finds his powers failing at this time...tracking down his power failure to the gorilla cage at the Central City zoo.


Flash figures Grodd's behind this, heads to Africa for proof, then back to Central City to defeat all the bad guys as well as Grodd!


And you think you've had a busy day!


Grodd Puts The Squeeze On Flash 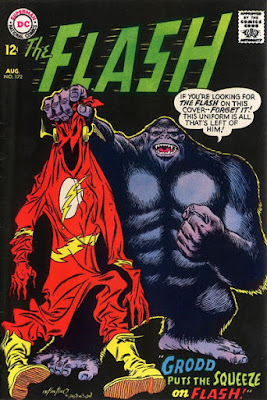 Flash #172 (August, 1967) is the last story about Grodd that John Broome and Carmine Infantino do together, but it's a winner, with all of Central City getting super-speed and being cut off from the rest of the world under a dome...

...with the Flash the only solution to the problem!


Grodd contacts Flash telepathically to claim responsibility for this....but Barry should be wary of his simian foe.


Flash figures out what's really going on, and is able to sock it to Grodd, with a little super-speed trickery of his own!

Beyond The Speed Of Life 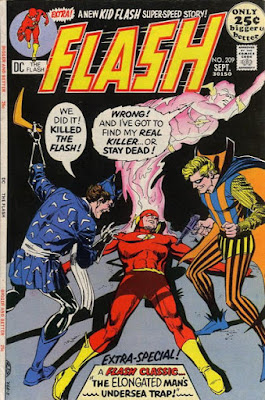 Flash #209 (September, 1971) finds Grodd's fate in new hands (that of writer Cary Bates and artist Irv Novick), involved in a fight where Trickster and Captain Boomerang think they've killed the Flash, and the Flash's spirit has to save the universe from the Devourer!

Quite a lot going on in this issue for Barry Allen, but not as much focus on Gorilla Grodd, and Grodd wasn't happy about that at all.


Things seems to have worked out well, but Grodd grew tired of monkeying around with the Flash and decided to take a vacation from the speedster with his next appearance. 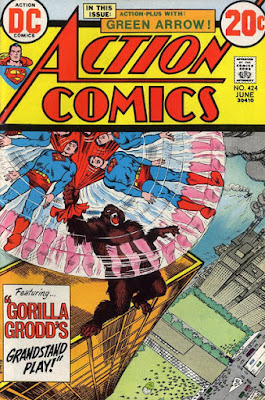 ...switching bodies with Solovar to address the United Nations on behalf of Gorilla City, and battling the man of steel, Superman.


Superman, who is use to simian foes (like Titano, who is much more like King Kong than Grodd, though Grodd does do his best Kong impersonation on this cover by Nick Cardy) does have some problems with Flash's foe...


...but is eventually able to win the day. 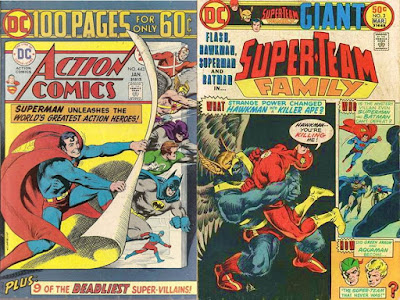 Action Comics #443 (January, 1975) by Elliot S! Maggin and Curt Swan sees Grodd work as a member of a team (that includes other individual JLA foes, like Brainiac, Clayface/Matt Hagen, Ocean Master, Sinestro, Merlyn, Chronos and the Harpy) all under the leadership of Zazzala the Queen Bee...and then Grodd reverts Hawkman into an ape in Super-Team Family #3 (February-March, 1976 by Steve Skeates, Rick Estrada and Wally Wood, covered more here). 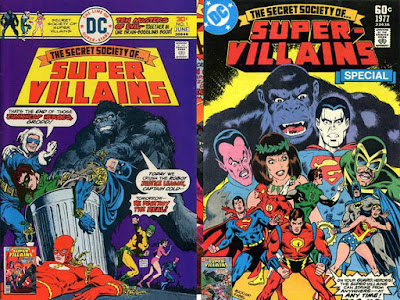