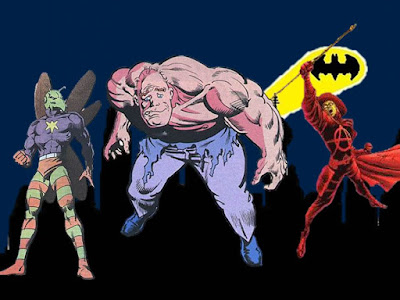 Looking back at old Batman villains, here's three that one would have likely never thought to be of much interest....but seems there will be some now, as they make the transition to live television!

So, let's take them out of the shadow of the bat, and focus on Killer Moth, Amygdala and Anarky! 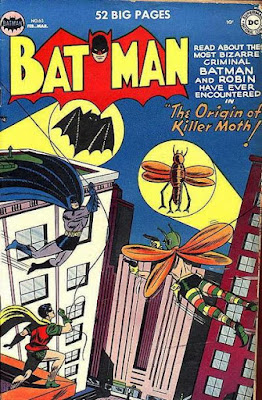 Cameron van Cleer was the first of these villains, appearing in Batman #63 (February-March, 1951 by writer Bill Finger and artist Lew Schwartz), with "The Origin of Killer Moth!".

Prisoner #234026 decides to become the "anti-Batman", setting himself up as a philanthropist friend of Bruce Wayne's...

...all the while working to help criminals with his costumed identity of the Killer Moth, complete with Moth-Cave, Mothmobile and even an infrared Moth signal to summon him!

Batman and Robin stopped the Killer Moth, but didn't catch the criminal himself. 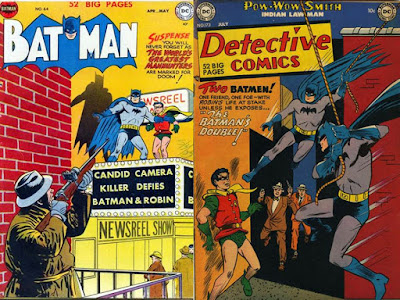 Batman and Robin faced him again in Batman #64 (April-May, 1951), stopping an attempt to steal a moth collection, and the dynamic duo finding out his secret identity and having the Killer Moth arrested at home, and in Detective Comics #173 (July, 1951) where Killer Moth kidnapped Bruce Wayne and tried to take his identity for a time, before the original version disappeared (call him the Golden Age or Earth-2 version, who faced the Earth-2 Batman; similar versions of these stories happened to Batman and Robin on Earth-1...don't let all that multi-Earth talk confuse you, but you can read about it here). 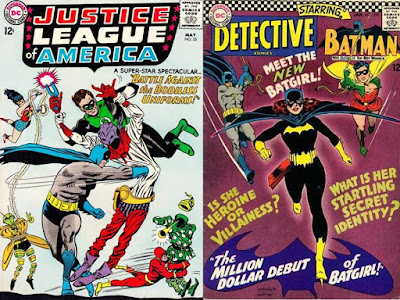 Killer Moth next appeared in Justice League of America #35 (May, 1965) along with Green Lantern foe Dr. Polaris and Flash rogue Pied Piper (and a few more JLA individual villains), but really it's only their uniforms in a plot by the Demons Three (Abnegazar, Rath and Ghast) to defeat the Justice League.  Killer Moth is more active in Detective Comics #359 (January, 1967) trying to kidnap Bruce Wayne (and leading to "The Million Dollar Debut Of Batgirl"). 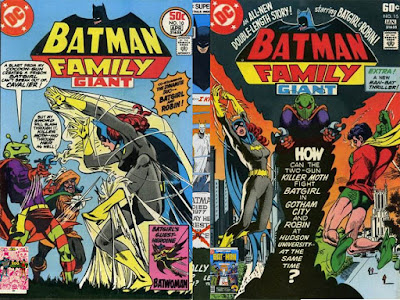 Killer Moth makes a brief appearance in Batman #200 (March, 1968), then doesn't return until Batman Family #10 (March-April, 1977) facing off against the duo of Batgirl and Batwoman (along with equally absent until this time Batman foe, the Cavalier), taking a break then to be part of the trial of Batman villains in Batman #291 to #294 (from September to December, 1977), and returning to menace the dynamite duo of Batgirl and Robin in Batman Family #15 (December-January, 1977/1978). 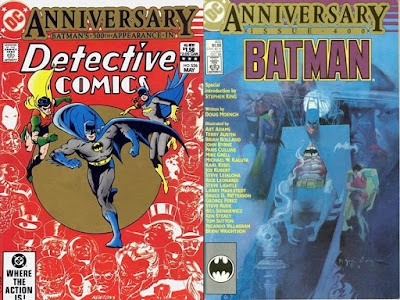 Had the Secret Society of Super-Villains gotten its sixteen and seventeenth issue, you would have seen Killer Moth as a member, facing off against the Freedom Fighters, (the story eventually being printed in the Cancelled Comic Cavalcade) but instead, Killer Moth was regulated to second fiddle in Batman #311 (May, 1979), facing Batgirl again in Detective Comics #486 (October-November, 1979), and just a face in the crowds of Detective Comics #526 (May, 1983), Crisis On Infinite Earths #9 (December, 1985) and Batman #400 (October, 1986). 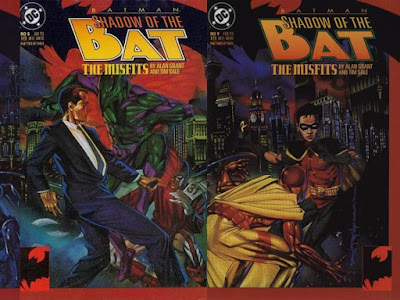 Killer Moth returned after the Crisis On Infinite Earths, as part of "the misfits", in Batman: Shadow of the Bat #7 through #9 (December, 1992 to February, 1993), along with Cat-Man and Calendar Man (two other minor Batman foes who had seen better days before), and they kidnapped Bruce Wayne and Commissioner Gordon, putting the new Robin, Tim Drake through his paces! 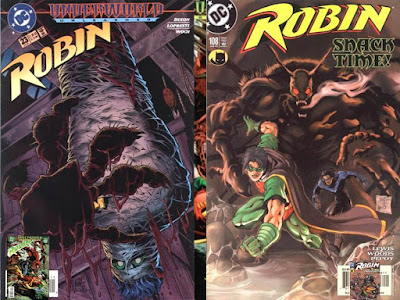 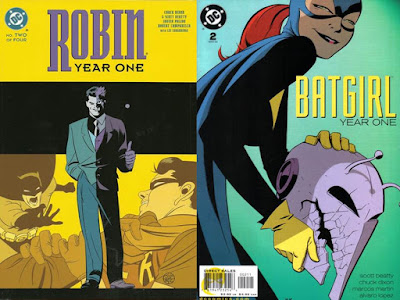 The classic Killer Moth showed up in Robin: Year One #2 (November, 2000) by writers Chuck Dixon and Scotty Beatty, and art by Javier Pulido and Robert Campanella, and in Batgirl: Year One #1 to #3, and #5 to #9 (February to October, 2003 by writers Scott Beatty and Chuck Dixon and artists Marcos Martin and Alvaro Lopez), and while Killer Moth was a second stringer behind Two-Face in Robin's first year, Killer Moth was a menace (even working with Firefly) in Batgirl's premiere year. 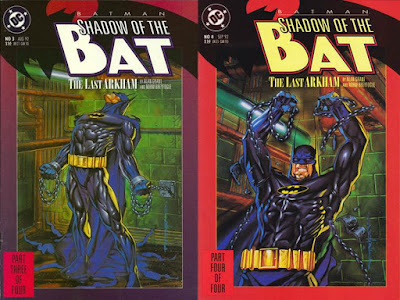 Aaron Helzinger was a man who had emotional rage problems, and to fix them, doctors removed his amygdala cluster (the bundle of nerves that control emotional associations).  This...made him into an even more homicidal manic, and a resident of Arkham Asylum (where we first met him, being manipulated by Mr. Zsasz and Jeremiah Arkham, in Batman: Shadow of the Bat #3 (August, 1992, by Alan Grant and Norm Breyfogle), and in the following issue, Batman: Shadow of the Bat #4 (September, 1992). 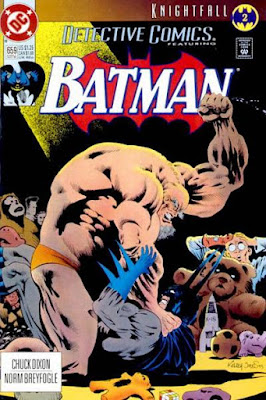 Amygdala appeared on his first cover with Detective Comics #659 (Early May, 1993 by Chuck Dixon and Norm Breyfogle), as a part of the Knightfall storyline, where Bane manipulated villains by freeing them from Arkham Asylum and into fighting Batman to wear the Gotham guardian out.

This issue had the Ventriloquist and Amygdala looking for the missing Scarface, and did result in Aaron being captured after a battle with Batman, and pretty much set Aaron's role in the Batman universe, incredible muscle to be used by smarter foes against Batman. 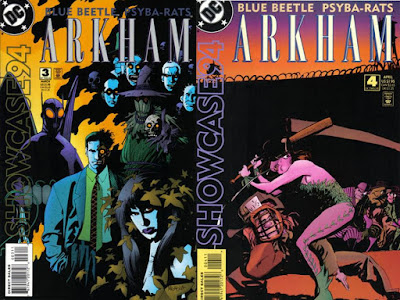 Amygdala was next in a pair of issues of Showcase (Showcase '94 #3 and #4, March and April, 1994), where the newly relocated Arkham patients (like Poison Ivy, Two-Face, Scarecrow, the Riddler, Mad Hatter, Firefly, Mr. Zsasz and more) faced off against Blackgate prisoners in a baseball game to help both sides deal with their new situations (and, yes, it went as well as you might think it would...). 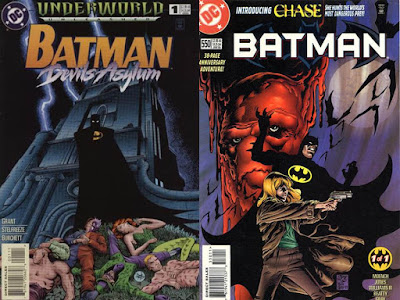 Aaron seemed to be getting better... 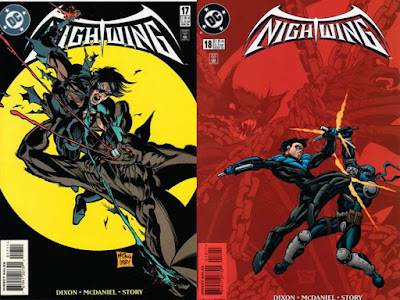 Aaron popped up in Bludhaven, as a tenant in the building owned by Dick Grayson (Nightwing), along with writer John Law (who was secretly the Golden Age hero and All-Star Squadron member, Tarantula) in Nightwing #17 and #18 (February and March, 1998), where Aaron quietly moved in while Nightwing fought Man-Bat and Deathstroke. 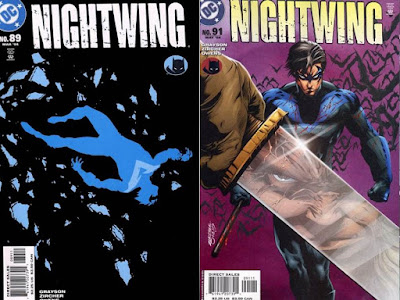 Amygdala was recruited for Luthor's Secret Society during 2006's Infinite Crisis, and drinking in the Penguin's Iceberg Lounge in Gotham Underground #5 (April, 2008). 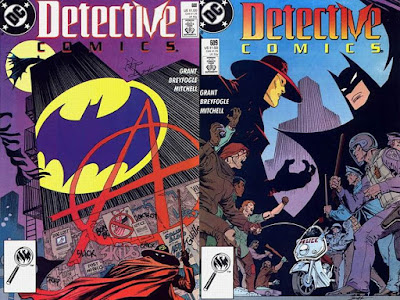 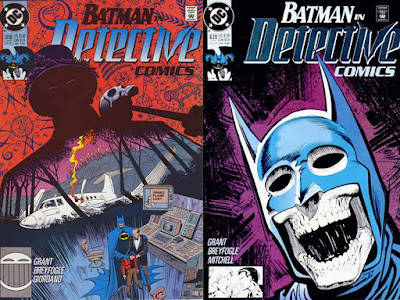 Lonnie returned briefly in Detective Comics #618 to #620 (Late July to Late August, 1990, behind the scenes in the first two of those issues)...

...showing computer skills and a continuing determination to fight for the people (this time under a new identity as Moneyspider). 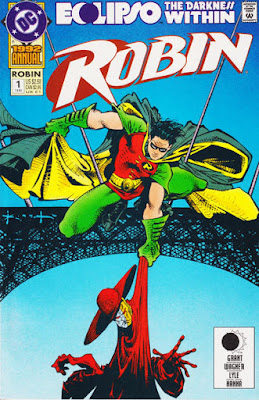 Next up for Lonnie, a brief bout with an Eclipso diamond (a black diamond which gave the possessor power, feeding on the owner's internal anger, but not caring about what happens to others)...


...which gave Anarky some super power (and also started to set a course for the young lad), setting him against someone his own age....Robin (Tim Drake)...in the Robin Annual #1 (September, 1992).

This ends with the young man in custody. 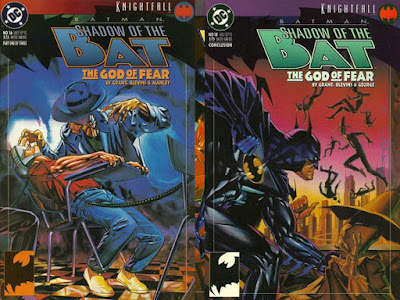 Anarky escapes during the confusion of the Knightfall event, realizing that Batman is the real problem in Gotham, and works to eliminate him (and Scarecrow) in Batman: Shadow of the Bat #16-18 (Early September to Early October, 1993).  Lonnie doesn't know how right he is, as Jean-Paul Valley has taken over being Batman at this time, and is a much stricter enforcer of the law....but they do end up catching Scarecrow (with this new Batman letting Anarky know that he does not want him around...threatening to kill him if he ever sees him again). 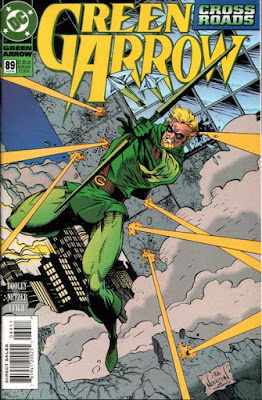 Anarky must have taken that threat a little to heart, as his next bit of work, closing a gun factory in Gotham, happened with the help of Green Arrow in Green Arrow #89 (August, 1994).

Ollie was at a bit of a crossroads in this point in his life, wandering across the country running into many different people...

...so meeting the anti-establishment young man helped Ollie center himself and get back on target, and Anarky kept on his path, interfering with an election in Gotham in a short solo story in Batman Chronicles #1 (Summer, 1995). 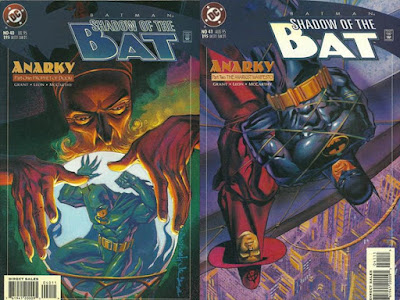 Anarky appears next in Batman: Shadow of the Bat #40 and #41 (July and August, 1995), where he finances Malochia (a crazed prophet, forecasting doom), who happens to use Anarky's funds to make Gotham end sooner (and runs afoul of Anarky, Batman and detective Joe Potato).

This ends with Lonnie's parents, Roxanne and Mike, getting an idea of what he does, and Anarky being presumed dead. 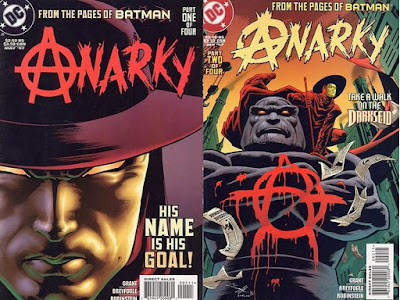 Being dead didn't stop Anarky from getting his own mini-series in 1997.  With Anarky #1 (May, 1997), Lonnie uses a demon, Blasfemy, to summon Etrigan the Demon (with less than success), and Lonnie tries his luck against the ultimate authority figure, foe of the New Gods of New Genesis and leader of Apokolips,  Darkseid, in Anarky #2 (June, 1997)....with Blasfemy paying the price. 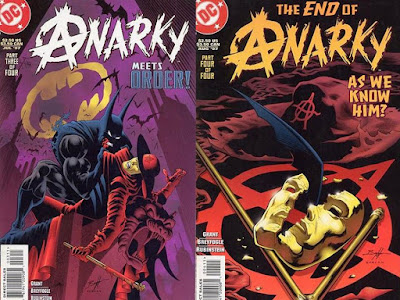 This causes Anarky to focus on Earth in Anarky #3 (July, 1997) with freeing people from the tyranny of leadership, and to a confrontation with Batman (and his own agenda)...


...then facing the consequences of his actions (and facing Scarface and the Ventriloquist) in Anarky #4 (August, 1997). 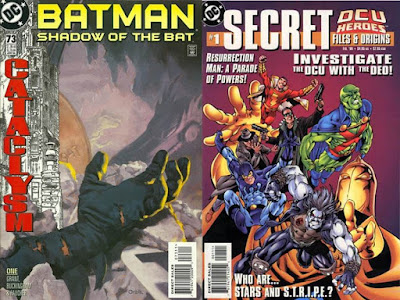 With the Gotham earthquake, Lonnie found himself adrift, thinking his parents dead, as of Batman: Shadow of the Bat #73 (April, 1998), Anarky decided to relocate his operation (as he had founded a company that made him very rich)....deciding to tackle the corruption of Washington, DC (as briefly shown starting in DCU Heroes Secret Files #1 (February, 1999). 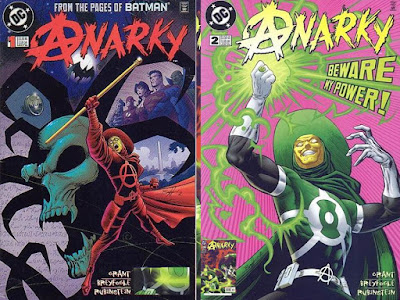 Anarky set up base in Washington, DC with his dog, Max, and his computer (also called Max), and found out of the Aberration, an all-powerful entity created by the flaws of the laws of reality.  In Anarky #1 (May, 1999), Lonnie tried to get the JLA to help him against the Aberration, but the Leaguer members were more interested in capturing Anarky and sending him to prison.  Anarky decided to fight the Aberration himself, stealing a Green Lantern ring, and eventually defeating Aberration (with some help from Green Lantern Kyle Rayner)....all in Anarky #2 and #3 (June and July, 1999). 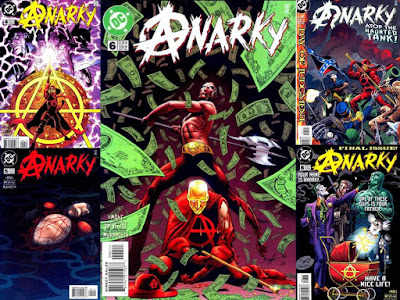 Next up for Lonnie, he took on a true world threat, that of eco-terrorist Ra's Al Ghul, and how the leader of the League of Assassins was manipulating troubles in the Mideast with super powered associates, Dolmen and Buzzword, with Anarky not doing so well in Anarky #4 to #6 (August to October, 1999), then Anarky facing animated undead with the help of the old Haunted Tank crew during the Day of Judgement in Anarky #7 (November, 1999), and while checking to see if his parents might still be alive, finds out that he was adopted in Anarky #8 (December, 1999), and may be the son of the Joker, in the last issue of his regular series. 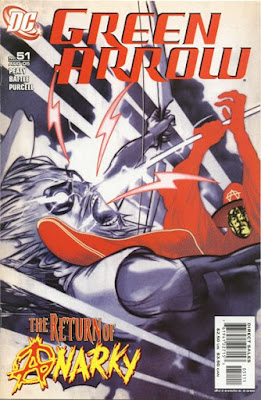 Anarky next enjoyed a little time as a grown up, in Young Justice: Sins of Youth #1 (May, 2000) and Sins of Youth: JLA Jr. #1 (May, 2000), but not for long, reverting to his normal age to deal with the supernatural problems caused by Circe in a battle with Wonder Woman that involved many of the heroes and villains of the DCU in Wonder Woman #175 (December, 2001).

Lonnie faced Green Arrow again in Green Arrow #51 (August, 2005), where Anarky is falsely blamed for an explosion in Star City...

...with Anarky again leaving Ollie to contemplate his own commitment to his crusade, as Lonnie seems so much more committed than Ollie is. 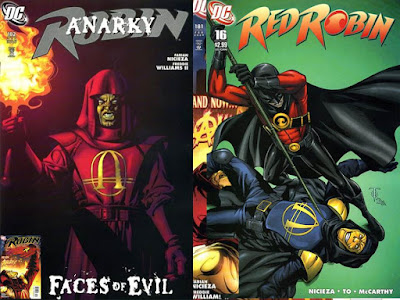 
More on this when we cover Robin villains at some point...

All of this proves that Anarky runs contrary to other villains like Killer Moth and Amygdala, as Drury and Aaron will appear on Fox's Gotham, and Lonnie will be appearing on the CW's Arrow!