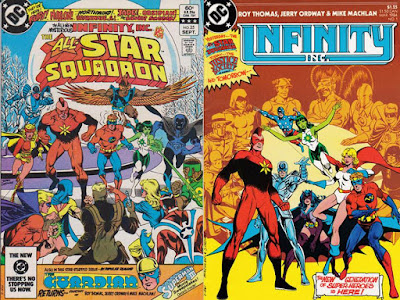 There are other worlds that exist out there....world's where Superman, Batman, Robin and Wonder Woman were fighting crime since World War II, and were helped by slightly different versions of Flash, Green Lantern, Hawkman and Atom...

...and that world was Earth-2, and those heroes had a next generation of heroes...who were Infinity, Inc.! 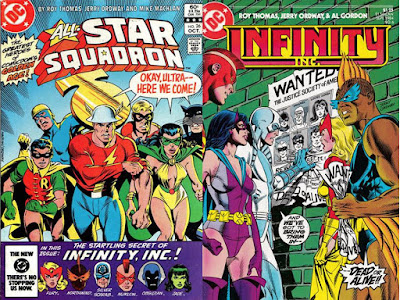 This led to an Infinity, Inc. series, starting with Infinity, Inc. #1 (March, 1984), where the team actually formed as the soon-to-be Infinitors stormed JSA HQ in the 1980s, leading to a quick battle with the JSA (revealing doubts of the Star-Spangled Kid), and then a plot by the simian Ultra-Humanite, which ended up sending Silver Scarab, Fury, Nuklon, Northwind, Jade and Obsidian (as well as Brainwave, Jr.), back to the All-Star Squadron issues, then picked up the story for the rest of "The Generations Saga" from Infinity, Inc. #3 (June, 1984) to Infinity, Inc. #10 (January, 1985). 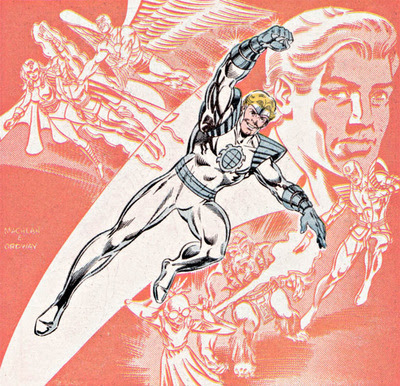 Hector Hall had a high flying history, being the son of the original Hawkman (Carter Hall) and Hawkgirl (Shiera Sanders Hall), and his birth had, for a time, ended the career of Hawkgirl, as Shiera took time to raise the boy (though Hawkman continued his career, both as archeologist Carter Hall and as the Justice Society's Hawkman).  Hector had some resentment towards Carter and Sheira's godson, Norda, who was half-Feitheran, and thus, had wings and could fly, as his parents could using their Nth Metal wings.


Hector eventually built himself a suit of armor from Nth Metal, that would allow him to fly, and inspired by friend and fellow "JSA brat" Lyta Trevor, as the two began dating at UCLA, he became the Silver Scarab and the two headed to JSA HQ to attempt to join the JSA. 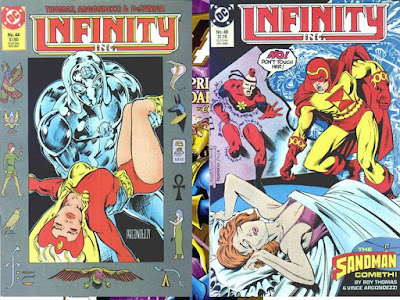 Silver Scarab's life got stranger after not making it into the JSA, but instead becoming an Infinitor, eventually leading to Hector becoming a "real" Silver Scarab to fulfill a prophecy of Hath-Set (an eternal foe of Hawkman and Hawkgirl), then becoming the new Sandman (not related to the Golden Age Sandman, but a true master of dreams), and then even joining the JSA as Dr. Fate!  But all that is in the future for Hector....and we're still looking at the beginnings of Infinity, Inc.! 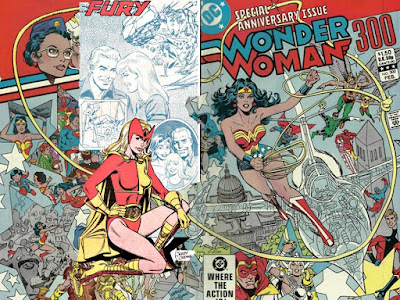 Hippolyta Trevor got her start in Wonder Woman #300 (February, 1983, by Roy Thomas and a group of artists, with Ross Andru working on the part with the soon to be Fury).  The Justice League's Wonder Woman (the Diana Prince of Earth-1) went to her Justice Society (Earth-2) counterpart for advise, and met Diana-2, and her husband, Steve Trevor, and their daughter, Hippolyta (named after Diana's mom), who also had amazon powers!  The Earth-1 Diana returned home after this meeting, and still had to deal with all her own troubles (including Sandman, master of dreams, Garrett Sanford).

Lyta transferred to UCLA, taking up a relationship with Hector Hall (whom she had known since she was a child, as both were "JSA Brats" and met over the years as their families gathered), with her revealing her plans to become the heroine Fury after Hector showed her his super-suit....and the two headed to JSA Headquarters to try to join the team, though destined instead to become charter members of Infinity, Inc. 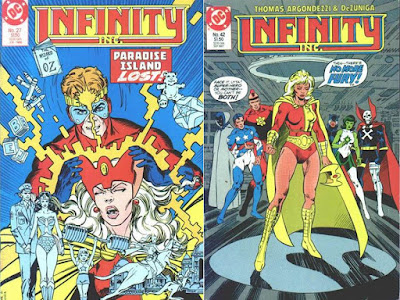 Fury's life became much more complex, after the Crisis On Infinite Earths, and the fact that her mother and father were wiped from existence (leading to a Golden Age Fury in the Young All-Stars, as well as Fury's history being changed, to her being raised by Miss America and Derek Trevor, but still being a "JSA Brat")....but Lyta remained in Infinity, Inc., though pregnant with Hector's child (thus taking a leave for a time), reuniting with Hector in his Sandman guise (though seeing that end, as Morpheus, the Sandman of the Endless, taking care of that), then becoming a true Fury on her own, giving birth to Daniel (who later took over as the new Sandman of the Endless), and reuniting all too briefly with Hector during his time as Dr. Fate.

Albert Rothstein was the godson of the Golden Age Atom, and son of Terri Rothstein (a scientist at Cape Canaveral, originally Terri Curtis, the daughter of Cyclotron...who you might remember from All-Star Squadron #21 to #26 and All-Star Squadron Annual #2....and Phillip Rothstein, a military helicopter pilot who died on duty).  Al was a big boy, due to his mother's exposure to radiation....and played basketball, but also worked on cars and other mechanical pursuits.  Albert also had quite the crush on Lyta Trevor (but never really acted on it, as she was smitten with the brooding Hector Hall).  Al had been trained since his youth by the Golden Age Atom, and couldn't wait to put on a costume and join Hector and Lyta (whom had already decided to go join the JSA), putting on a costume of his own (and shaving most of his head to have a mohawk, quite a fashion statement of the 1980s).  Al even had powers of his own, being ultra-dense (and later finding he could alter his density and size slightly), as well as having strength and a degree of invulnerability. 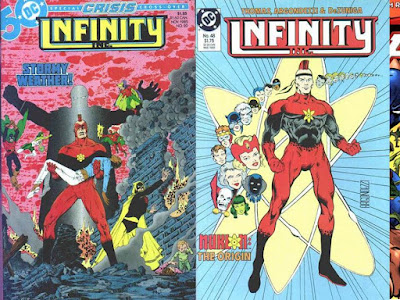 As Nuklon, Albert was a founding member of Infinity, Inc., where he happily stayed for the 53 issue run of the team, seeing them though the red skies and history changing of the Crisis on Infinite Earths, leaving the USA briefly during Darkseid's attack on Earth's Legends, and even meeting with the New Teen Titans, the Outsiders and later, all of Earth's heroes while they prepared for the coming Millennium, even working with all Earth's heroes after the end of Infinity, Inc. during Earth's Invasion! and the War of the Gods, briefly joining the Conglomerate with Jesse Quick, then joining the Justice League with Obsidian for a time, then decided to honor Atom by becoming the Atom-Smasher and joining the JSA at a particularly dark time in his (and the JSA's) life. 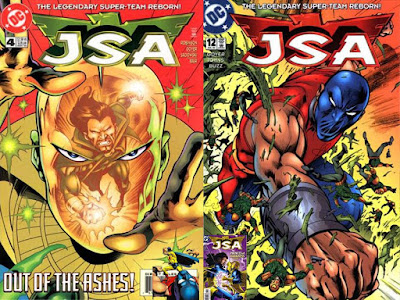 Check back inf the future...

...as we look at the rest of Infinity, Inc., with members such as Northwind, Jade, Obsidian and Brainwave, Jr., and how the Star-Spangled Kid, Power Girl and Huntress fit into all of this, as well as working with Silver Scarab, Fury and Nuklon!