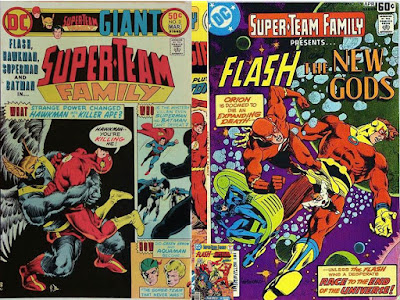 Flash seems like a friendly fellow, teaming up with fellow heroes like Superman, Batman and Green Lantern (and more in the Justice League)...


...but he was also a main feature for three issues of a comic called Super-Team Family. 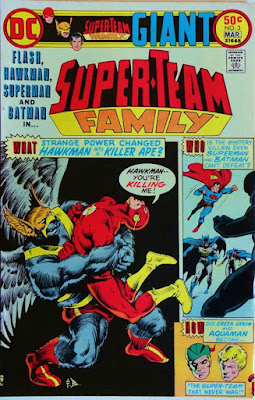 Super-Team Family #3 (February-March, 1976) featured the story, "Gorilla My Dreams" by writer Steve Skeates, and art by Ric Estrada and Wally Wood, and found Flash facing off against his pal, Hawkman, who had been turned into a gorilla!  First, Hawkgirl (Shayera Hol, Hawkman's wife), had to get Flash's attention (and the Hawkgorilla) had ruined her super-suit and wings, so Shayera caused a little problem with Barry and his wife, Iris (and Barry had just been meeting with Black Canary in the JLA Satellite as well).

All this drama....and, if a gorilla is involved, you'd think Gorilla Grodd would be involved (and you'd be right!).

All under a cover by Frank Brunner, with reprints of a Superman/Batman story from World's Finest Comics #176 (June, 1968) with Supergirl, Batgirl, Jimmy Olsen and Robin, and Aquaman and Green Arrow's first team-up from Adventure Comics #267 (December, 1959).

Flash, Supergirl and the Atom 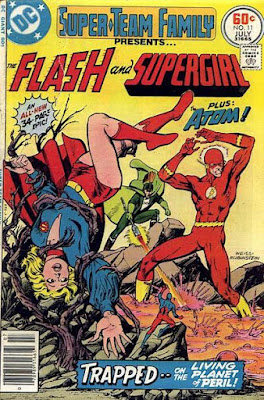 Super-Team Family #11 (June-July, 1977) ushered in a new era for Super-Team Family, that of having only one, long story (this one being called "The Other Side Of Doomsday" by Gerry Conway, Alan Weiss and Joe Rubinstein, the later two having also drawn the cover).

This issue featured the Flash, the Atom (Ray Palmer) and Supergirl (Kara Zor-El a.k.a. Linda Danvers) facing off against T. O. Morrow, as he had kidnapped Iris Allen and Jean Loring (the wives of the Flash and the Atom).

The heroes fought the villain on an alien planet, and saved Iris...

...but this wasn't the end of the story (though Flash took a break from it). 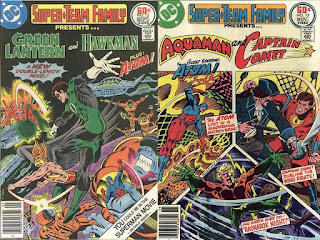 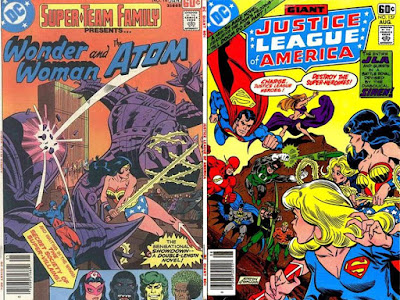 ... and with Wonder Woman to face the Secret Society of Super-Villains including Grodd and the Floronic Man (who had taken Jean from Atlantis in the Secret Society of Super-Villains #10 of October, 1977) in Super-Team Family #14 (December-January, 1977-1978, inked by Romeo Tanghal).  This storyline even ended in Justice League of America #157 (August, 1978, by Gerry Conway, Dick Dillin and Juan Ortiz), which had the whole Justice League of the time in the issue (including Flash), as well as guest-star Supergirl (and cameos by Captain Comet, Aquaman's wife Mera, Iris Allen and King Solovar of Gorilla City).

Flash and the New Gods 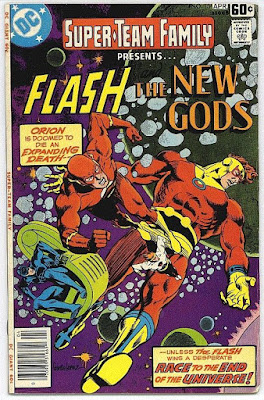 Super-Team Family #15 (March-April, 1978 by Gerry Conway, Arvell Jones and Romeo Tanghal, all under a cover by Jose Luis Garcia-Lopez) featured the "Gulliver Effect" where the New Gods (Metron, Highfather, Lightray and Jezebelle; cosmic beings who lived on the world of New Genesis) to save their friend and fellow New God, Orion, from rapid growth triggered by Darkseid (the evil leader of Apokolips).

This sent the Flash racing beyond the barrier of "the Source" (the place that had given the New Gods their power), which took the Flash further than he had ever gone before!

Sadly, this was the last issue of Super-Team Family, but there are still many Flash team-ups to read, from his many races with Superman, to the early days of Brave and the Bold, with the Atom, the Martian Manhunter, the Doom Patrol and the Spectre!
Posted by Dave's Not Here Comic Blog at 3:39 AM