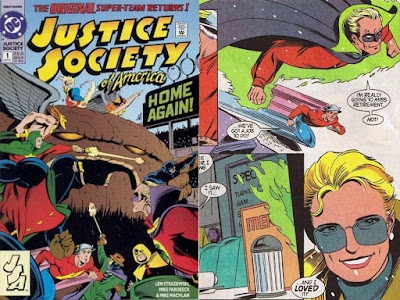 ...her first appearance in Justice Society of America #1 (August, 1992, by Len Strazewski and Mike Parobeck, as were all the issues of this 10 issue run), just had her as a mystery blonde in a diner, showing a little super-speed and an interest in the Justice Society. 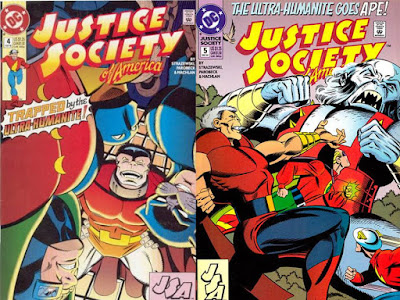 Jesse didn't show up again until Justice Society of America #4 (November, 1992) and Justice Society of America #5 (December, 1992), where she got a note from her daddy to get some files to the JSA....fast.  Jesse did, with a super speed boost from the formula 3X2 (9YZ) 4A, and got into a fight with an old JSA foe (as well as finally giving her name, to Wally West's version of the Flash...that of Jesse Chambers, making her the daughter of Johnny Chambers, a.k.a. All-Star Squadron speedster, Johnny Quick!). 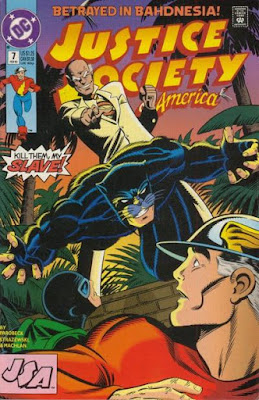 Jesse popped up again, in Justice Society of America #7 (February, 1993), helping the JSA on a cruise ship, and she was almost in a super-hero costume here....almost (it was more like exercise gear), and she also met Johnny Thunder's new apprentice, Kiku.


Neither Jesse nor Kiki joined the JSA during this period, but they both stuck around....

...and Jesse finally found her identity (well, more or less). 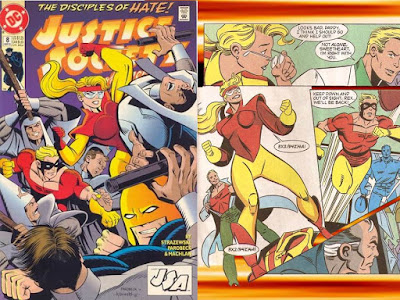 With Justice Society of America #8 (March, 1993), Jesse was speeding around in costume and helping the JSA (and her dad, Johnny Quick) and the two of them helped out the original Hourman (who was also worrying about his ailing son, and his dependance on Miraclo).


Jesse's first costume was one of her best! 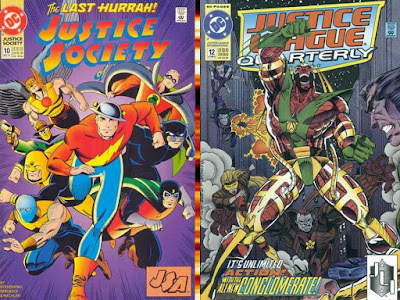 Jesse was there to note the end of this run of the Justice Society in Justice Society of America #10 (May, 1993), and she even found herself in a new super-group, the Conglomerate, in Justice League Quarterly #12 (Autumn, 1993) along with old heroes, Nuklon (Albert Rothstein of Infinity, Inc.) and Hardline (formerly, Reverb in the original Conglomerate, and also Armando Ramone, the brother of Vibe) and new heroes Templar and Echo.  This Conglomerate didn't last long after their battle with Amazo (and soon after, Nuklon's battle with Shrapnel in Green Arrow #81 of December, 1993). 
Jesse was under consideration for being the Flash while Flash was facing off against Kobra and more! 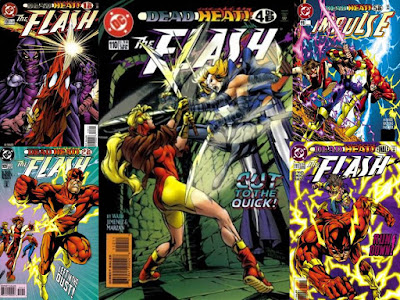 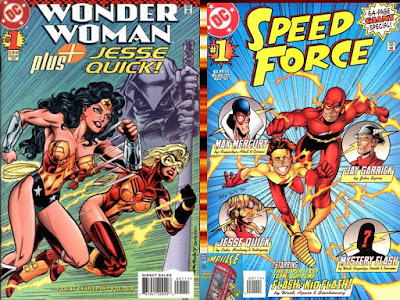 Jesse had a few other quick appearances, in Wonder Woman Plus #1 (January, 1997), Speed Force #1 (November, 1997), helping to establish her corporation, Quickstart Enterprises, even participating in the DC One Million event (along with Supergirl and Arsenal, among a few others). 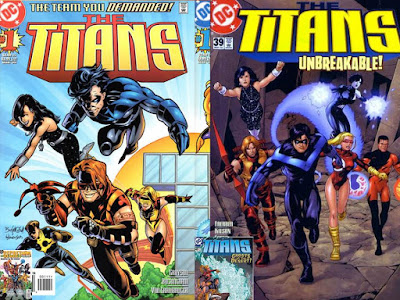 Jesse then settled in as a member of the Titans for a time...with the Titans Secret Files #1 and Titans #1 of March, 1999 to Titans #50 of April, 2003, and was there when that group of Titans fell apart with Titans/Young Justice: Graduation Day 3 issue mini-series of 2003.  Jesse even tried out a few looks during this time, and reunited with her mother, Liberty Belle (who had been a member of the All-Star Squadron as well, and also gave Jesse adrenaline based super-strength). 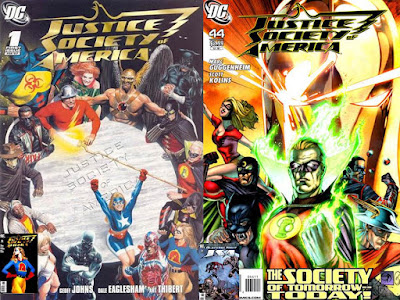 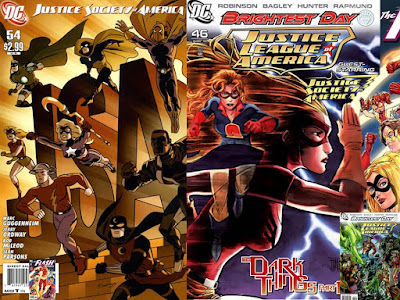 Jesse had even begun to be involved with Rick Tyler (who had recovered from his illness that we saw when Jesse first met him all the way back when she first costumed up, and became the new Hourman)..

....all the while, Jesse kept quick with a hardworking attitude, which made her such a favorite, in no matter what identity she had, she kept running!

Posted by Dave's Not Here Comic Blog at 3:10 AM