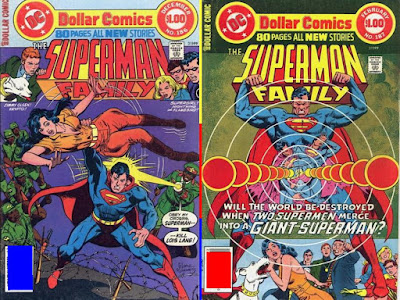 To be fair, Superman has met Superman before....that sounds strange, doesn't it?

Time to take a look at what they did!

Save My Friend, Kill Your World 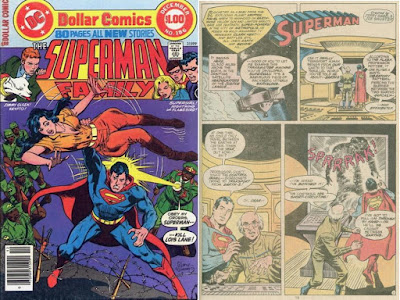 This solo team-up started simple enough, with the Superman of Earth-1 taking his friend, Professor Potter up to the Justice League of America's satellite, and showing him the Transmatter Machine in Superman Family #186 (November-December, 1977) by Gerry Conway, Curt Swan and Murphy Anderson (under a cover for the Lois Lane story of the issue by Jose Luis Garcia-Lopez).

Of course, just as Professor Potter touches it, someone is coming through....so, a short circuit happens, bringing in interdimensional menace, Krogg, to Earth-1.  Krogg proves mightier, than Superman, and even airless space was of no problem to him. 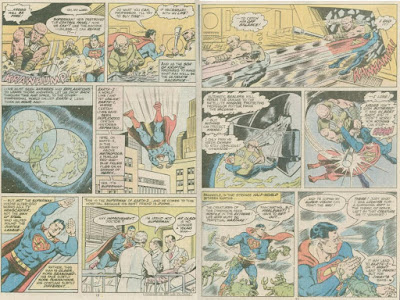 Meanwhile, on Earth-2, that Superman is dealing with his Jimmy Olsen dying from a rare disease that is eating one of his organs....doctors could use a duplicating device to save the man, but this Jimmy has a rare blood and no living relatives.  Superman thinks quickly, knowing Jimmy has a younger duplicate on Earth-1, and heads to the JSA's Transmatter Machine in their Brownstone....but, as he is heading to Earth-1, a short circuit opens a dimensional breach....which allows Krogg to go to Earth-1 in Superman of Earth-2's place.

Navigating his way through some interdimensional space, the Earth-2 Superman finds a spacial rift to Earth-1....and arrives just in time as Krogg got back to the JLA Satellite, intent on destroying the Transmatter Machine and Professor Potter, so he cannot be exiled again (like an old wizard did long ago)....


A Phoenix Of Steel 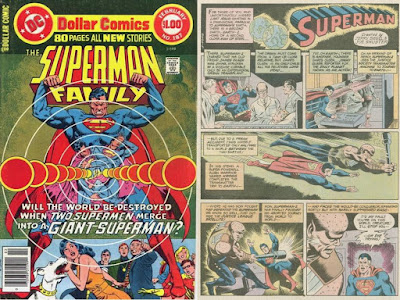 Superman Family #187 (January-February, 1978) by Gerry Conway, Curt Swan and Jack Abel (with a cover relating to this story by Jose Luis Garcia-Lopez)...but, that's jumping a head a bit.

Superman of Earth-2 doesn't have any better luck against Krogg...who leaves the JLA Satellite, heading to Earth below.  The Earth-2 Superman rescues the Earth-1 Superman from space, and Professor Potter suggests they need to combine their power against Krogg. 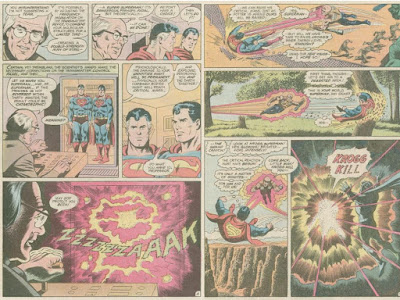 Both Superman don't think just teaming up will do it....and that's not Potter's idea.  The Professor wants to use the Transmatter Machine to combine them into a Super-Superman to take on Krogg.  The Men of Steel agree....and the combination works, and they fight with Krogg, overloading him so he explodes, and doing it quickly, so they can get back to the JLA Satellite to be split apart again (or they would also explode) and Superman of Earth-1 goes to retrieve his Jimmy Olsen so the Superman of Earth-2 can take him to save his Jimmy (this is reflected in the Jimmy Olsen and Lois Lane stories of the issue).

The Superman of Earth-1 muses philosophically at the end....pledging to keep a bit of distance from his other dimensional duplicate because they were just a little too close for comfort (who actually was busy at this time in the 1970s All-Star Comics revival with his cousin, Power Girl). 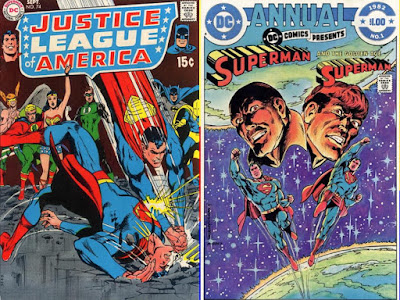 Of course, Superman had met Superman before, in the seventh JLA/JSA team-up (where they looked very similar, and powers were about equal), worked together against Solomon Grundy in the ninth JLA/JSA team-up, and had a massive team-up well after this story in DC Comics Presents Annual #1 in 1982 with their respective Luthors, as well as a flashback to a time when Superman was Superboy and Clark Kent, as explained in two issues of the New Adventures of Superboy....all before the Crisis On Infinite Earths.