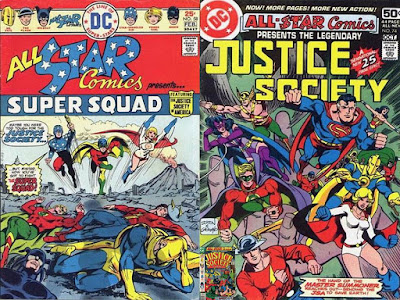 All-Star Comics had a historic run back in the day, running 57 issues from the Summer of 1940 to February-March, 1951, and it was home to the Justice Society of America before turning into All-Star Western with #58 in 1951....

...but, All-Star Comics came back in the 1970s, with All-Star Comics #58 (January-February, 1976), and it brought the Justice Society back with them, including new members, who started out first as the Super-Squad! 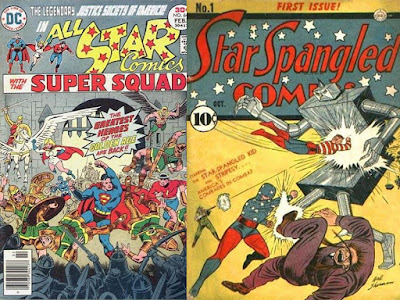 Star-Spangled Kid (Sylvester Pemberton) had been around (since in Star-Spangled Comics #1, October, 1941 by Jerry Siegel and Howard Sherman), working with his driver, Stripsey, and a member of the Seven Soldiers of Victory (and later revealed, the All-Star Squadron) all during World War II...and, thanks to a little time travel (and a JLA/JSA team-up), ended up coming out of the 1950s, to the current day.

Starting with the revived All-Star Comics, Star-Spangled Kid was using Starman's Cosmic Rod (on loan, as Starman had broken his leg), and got involved with helping the JSA save the world (along with the ex-Boy Wonder, Robin) and another new heroine, introduced at the time.  The three formed a loose "super-squad", but then joined the JSA with All-Star Comics #64 (January-February, 1977), mostly to show off his new Cosmic Converter Belt, which was an improvement over the original, not only allowing Sylvester to fly, project beams and influence gravity, but also to change molecular structure (making things like Hawkman's wings, a spacesuit for Superman and other costume changes).   Sylvester was also doing all this to impress his new teammate (with little success) and to help fellow Seven Soldier, the Shining Knight who happened by for a time. 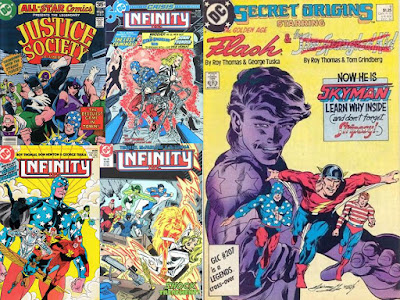 The troubles for the Star-Spangled Kid continued, as the JSA faced a new menace..that of the Strike Force, and Sylvester found that menace to be a part of his past, so took a leave of absence from the team to deal with that (though regularly checked back).  Then, the Star-Spangled Kid formed Infinity, Inc. to have a home for the next generation of super-heroes, and that's where he focused his energy (though his Cosmic Converter Belt had pretty much shorted out during the Crisis on Infinite Earths), and after most of the JSA was confined to limbo, Sylvester changed to a new costume identity (for a new look, and maybe to impress new friend, Jonni Thunder), that of Skyman (taking on in Secret Origins #9), which he held from Infinity, Inc. #31 until his end in Infinity, Inc. #51. 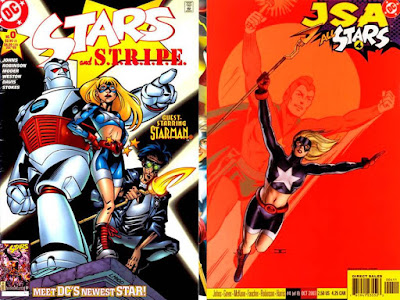 Sylvester even had a legacy, young Courtney Whitmore, who took up the identity of the Star-Spangled Kid with Stars and S.T.R.I.P.E. #0 (July, 1999), after finding some of Sylvester's old stuff in her step-father's storage (he being Pat Dugan, Syl's partner in fighting crime, Stripsey....who then also debuted a suit of armor at this time, and started calling himself S.T.R.I.P.E.).  Courtney later joined the JSA, and even took up the name Stargirl! 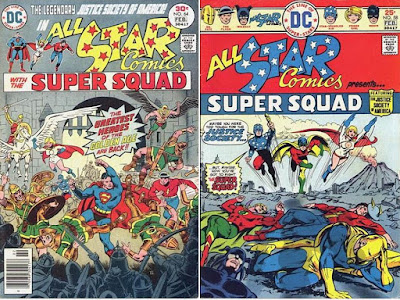 Rocketing from the planet Krypton, Power Girl's ship was a little slower than Superman's, so she got here a little later than Kal-L (who had already married Lois Lane), so it took a little longer for Kara Zor-L to make her debut (that in All-Star Comics #58, January-February, 1976, by Gerry Conway, Ric Estrada and Wally Wood).  Not quite as powerful as Superman, Power Girl was still leaping buildings in a single bound during her earlier appearances, but proved to be quite a help to the JSA as a part of the "Super Squad" with Robin and the Star-Spangled Kid, helping against Per Degaton and Brainwave, Vulcan and Zanadu before joining the JSA in All-Star Comics #64 (January-February, 1977, which also lured her cousin out of semi-retirement to help fight Vandal Savage).

Power Girl did quite well as a liberated new JSAer, working against the Injustice Society of the World, fighting the Underlord and his minions, and even helping the JSA against the Psycho-Pirate (who was turning JSAers against each other). 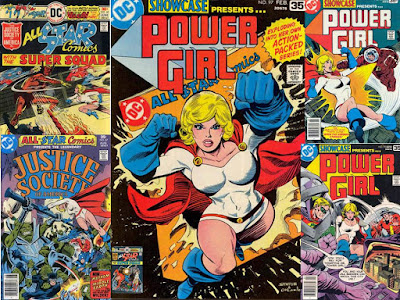 After a brief trip to Earth-1 to meet the JLA (and the Legion of Super-Heroes, in Justice League of America #147 and #148), Power Girl continued her work with the JSA, meeting a new friend who would change her life, getting help from the original Wonder Woman to get an education in computer science (and getting the new identity of Karen Starr, and three issues of Showcase from #97 to #99 in 1978 by Paul Levitz and Joe Staton, reprinted in the first Power Girl TPB in 2006). 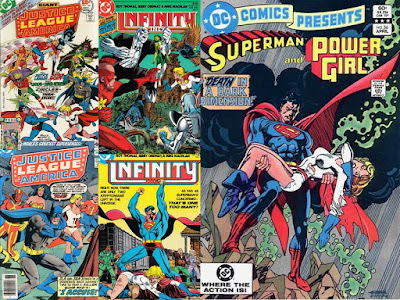 Power Girl continued to distinguish herself with the JSA, and even briefly joined Infinity, Inc. during its early days, before returning to the Justice Society, and meeting her Earth-1 cousin in DC Comics Presents #56 (April, 1983),  and ended up escaping the fate of the JSA (being sentenced to limbo) after the Crisis on Infinite Earths. 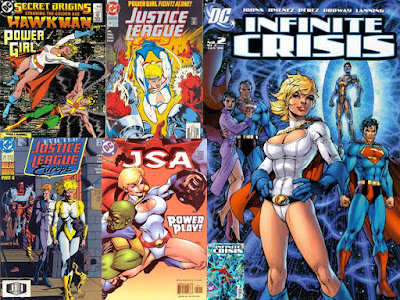 Now, left without a history, Power Girl wandered the Earth somewhat aimlessly (though it was found out she had a different past, having been the granddaughter of Arion, Lord of Atlantis, at least as Secret Origins #11 told us), and she continued to battle evil, on her own (first in Skartaris with the Warlord, a brief return to Infinity, Inc., her own 4 issue mini-series, finding that she had taken Supergirl's place in history with the Doom Patrol), then, after an alien Invasion!, with the Justice League Europe, for a time (getting a new, tighter costume, then another...and a cat!), and then found herself working with the JSA again... 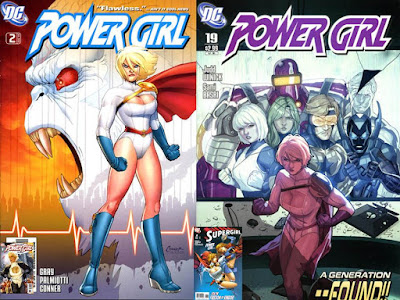 ...and even finding out that Arion had lied about her past, and that she was indeed the original Superman's cousin during the Infinite Crisis...

...(all of which says there is so much more to Power Girl, including her own regular series, so we'll look into more of her history later, as the various Crises and Justice Leagues come up!).

Odd that a girl from an exploded planet would find a friend on Earth, but she did in the daughter of Batman, Helena Wayne, the new Huntress of Earth-2.  The Huntress premiered in DC Super-Stars #17 (November-December, 1977 by Paul Levitz, Joe Staton and Bob Layton), where Helena had to face the death of her mother (Selina Wayne, formerly Selena Kyle, the Catwoman), and donned a costume that looked like a hybrid of Batman and Catwoman's to hunt down Silky Cernak, Selina's killer. 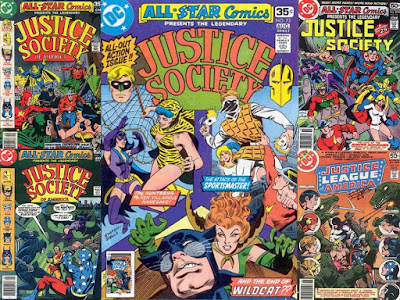 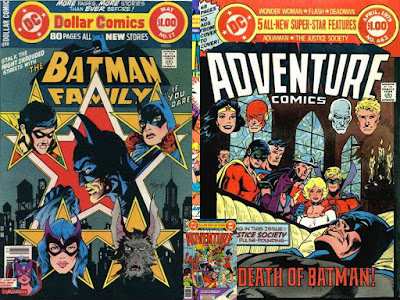 Huntress also went to meet her Earth-1 "uncle", the Batman of the Justice League of America at this time (in Batman Family #17), and soon started a series of her own, first in Batman Family (#18-20), then as a back up in Wonder Woman (starting in Wonder Woman #271).  Huntress started to be a regular in JLA/JSA team-ups, and was there for the JSA's brief move to Adventure Comics from Adventure Comics #461 to #466 (the last of which had new details about the end of the JSA in the Golden Age). 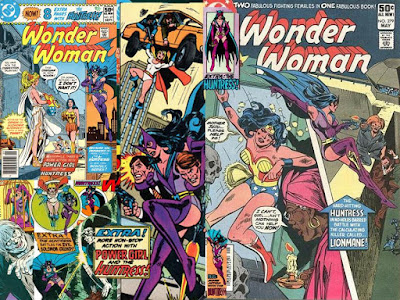 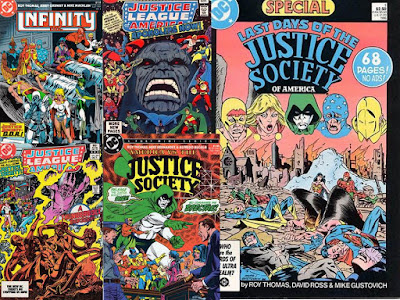 Towards the end of Huntress' Wonder Woman back-up run, she (along with Power Girl) worked with Infinity, Inc. and were even briefly members of that team, up until Infinity, Inc. #12, then worked as lawyer Helena Wayne to prove the innocence of the JSA in America vs. the Justice Society #1-4, before the Crisis on Infinite Earths ended the career of the Huntress (at least as Batman's daughter for a time), as well as putting the JSA in limbo for a time (all except Dr. Fate, the Spectre, Power Girl and the Star-Spangled Kid, and including non-members Hawkgirl and Sandy, partners of Hawkman and Sandman), starting with the Last Days of the Justice Society Special of 1986; this put the JSA on hold for a time, but you can't keep good heroes down!

Posted by Dave's Not Here Comic Blog at 4:03 AM