Why Marvel Needs the Fantastic Four 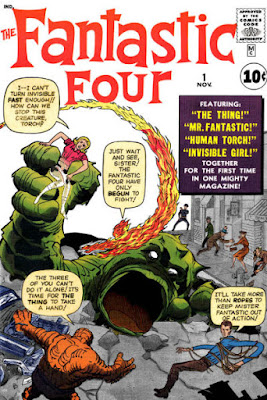 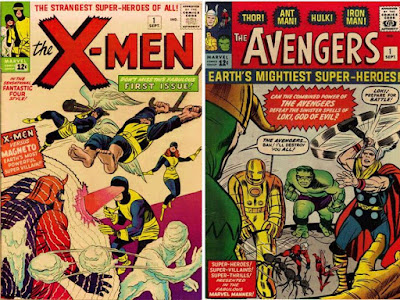 At one point, this was considered to be the start of the Marvel Universe...

....the original X-Men were created "in the sensational Fantastic Four style" and the Avengers formed when Rick Jones' call for help with the Hulk to the FF was redirected to Iron Man, Ant-Man, Wasp and Thor!

Friends of the Fantastic Four 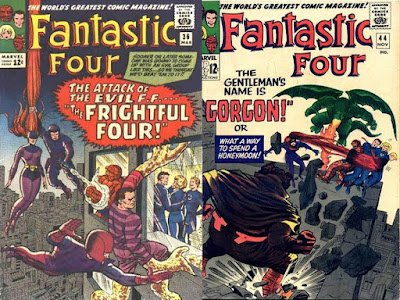 The Inhumans slowly worked their way into the life of the Fantastic Four...starting with Medusa (as a member of the Frightful Four, along with the Wizard, Paste-Pot Pete and the Sandman, in Fantastic Four #36 in March, 1965 by Stan Lee and Jack Kirby), then followed by Gorgon in Fantastic Four #44 (November, 1965, also by Stan and Jack), and the whole royal family of Inhumans (including leader Black Bolt, Karnak, Triton and Crystal) in Fantastic Four #45 (December, 1965 also by Lee and Kirby). 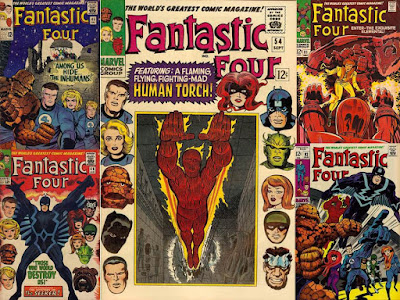 The Inhumans were a race of humans modified by exposure to the Terrigen Mists to have powers and abilities far beyond those of normal humans, and they lived apart from humanity in their city of Attilan.  The Inhumans saga slowly evolved over issues of the Fantastic Four, with the lovely Crystal being the object of affection of the Human Torch...(and Crystal becoming a member of the Fantastic Four for a time, when Sue had to take maternity leave after the birth of her and Reed's son, Franklin...starting in Fantastic Four #81 of December, 1968). 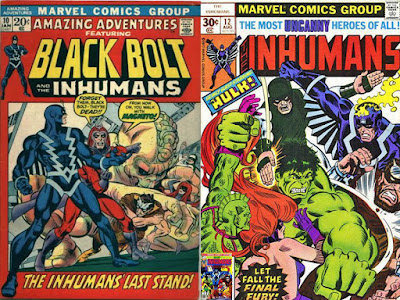 But, the Inhumans couldn't be contained to one book...having their history explored in Thor and elsewhere, and graduating to a few series of their own, like a 10 issue run in Amazing Adventures #1 to #10 from August, 1970 to January, 1972, to their first self-titled series with the Inhumans #1 to #12 from October, 1975, to August, 1977 and oh so many more! 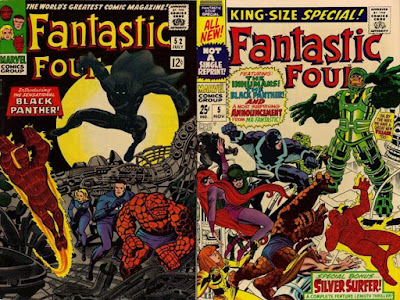 The Inhumans worked with Black Panther as well, another friend of the FF, who premiered in Fantastic Four #52 (July, 1966 by Lee and Kirby again).  T'Challa was a prince of the African nation of Wakanda, the home of the unique metal of vibranium...and he wished to prove his meddle against the Fantastic Four, and did!  Black Panther became a quick ally of the team when Klaw killed T'Challa's father, T'Chaka (Fantastic Four #53, August, 1966).

Black Panther worked with the FF against a few foes quickly, ending with Psycho Man in Fantastic Four Annual #5 (November, 1967)...before moving on, meeting Captain America and soon joining the Avengers! 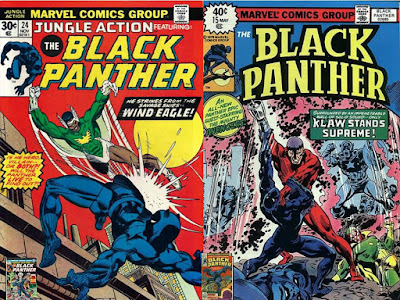 ...oddly, with both those series ending elsewhere...and the Black Panther getting more series as well...

Foes of the Fantastic Four 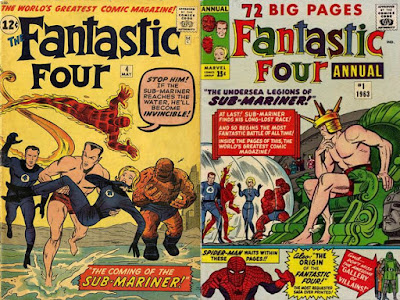 An early foe of the Fantastic Four was the Sub-Mariner...and Namor was a foe of the whole human race!  Starting with Fantastic Four #4 (May, 1962), when Johnny Storm found a derelict in a homeless shelter...and cleaned him up to realize he was Namor, the Sub-Mariner!  Namor thought he lost his city of Atlantis, and vowed to take revenge on the human race (though being a threat to the family of the Fantastic Four as well, as he had intentions toward the Invisible Girl as well...much to the annoyance of her beau, Mr. Fantastic!).  Namor used his aquatic powers in a few early battles with the FF, culminating in Fantastic Four Annual #1 (September, 1963), when Namor found out that his people were still alive!

But, that wasn't the end of Namor's tale...or the trouble he would cause the Fantastic Four, in more ways than one.  While battling the FF (and soon after, the Avengers, with the Hulk, no less), the Sub-Mariner also freed Captain America from his prison in ice (allowing Cap to join the Avengers!). 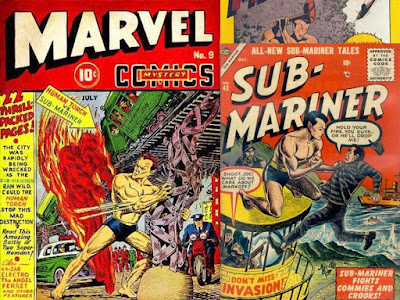 With Cap and Namor now active, it was realized that the Fantastic Four weren't the start of the Marvel Universe (and there was a whole history of Marvel characters from before, with Timely Comics, where Sub-Mariner and Captain America had comics, along with a different android Human Torch!). 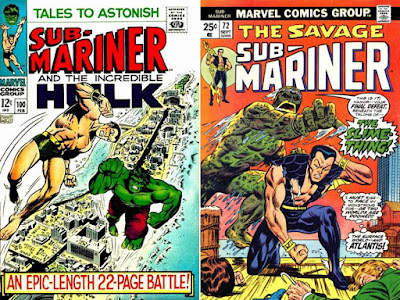 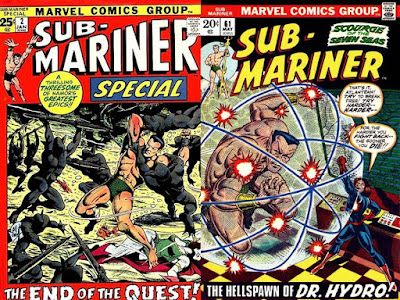 But, Namor wasn't without a title for long, ending up in one with fellow Fantastic Four foe, Dr. Doom (that of Super-Villain Team-Up). 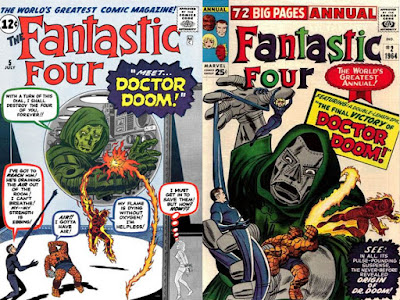 Victor von Doom was a college classmate of Reed Richards and Ben Grimm, who was annoyed by Reed's being a better scientist than Doom.  After an accident in the lab where he was working (which Reed tried to warn him about), Doom left the university, to head to Tibet, making his armor and then going to home to Latveria to take that country over (all from Fantastic Four Annual #2, September, 1964). 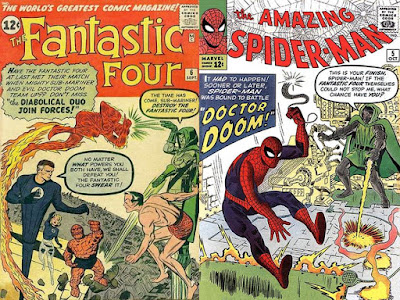 Dr. Doom also made the rounds, working with other villains like the Sub-Mariner (in Fantastic Four #6 in September, 1962), and even facing other members of the Marvel Universe, like Spider-Man (in Amazing Spider-Man #5 in October, 1963) and the Avengers (starting with Avengers #24-25, January-February, 1966 or earlier, as later reports came in)! 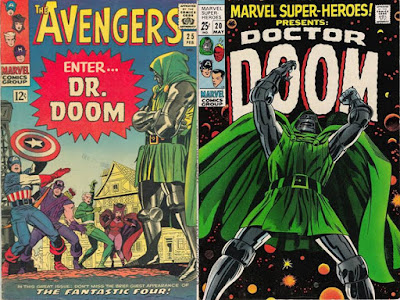 Dr. Doom's first solo tale came with Marvel Super-Heroes #20 (May, 1969), with Doom having to take on fellow Fantastic Four foe, El Diablo, who had tried to influence Doom by taking Valeria (the love of Doom's life)...

...but you can read more on this here, with the title becoming mostly reprints after his appearance, Dr. Doom DID defeat the Marvel super-heroes! 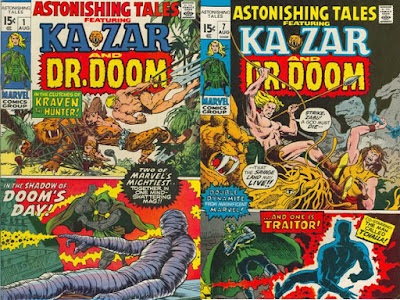 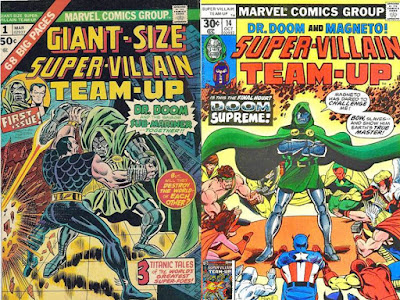 All this villainy, where can heroes turn? 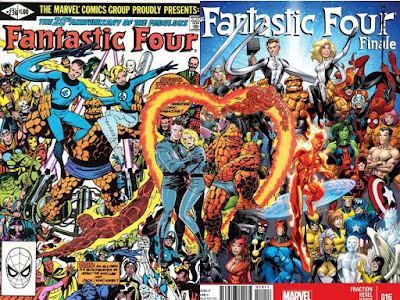 The family was the core of what made the Fantastic Four such an important part of the readers lives...and, by extension, made the whole of the Marvel Universe part of our family as well.
Posted by Dave's Not Here Comic Blog at 4:00 AM