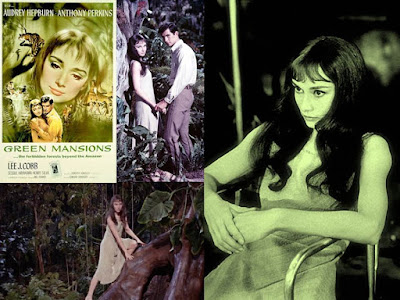 In 1959, the movie Green Mansions debuted, directed by Mel Ferrer, with Audrey Hepburn playing the lead role of Rima, a "Bird Woman" who lives in the local forest, and falls for Abel (Anthony Perkins), and Abel struggles to prove his love for Rima to her grandfather, Nufflo (Lee J. Cobb) and the tribe of natives including Kua-Ko (Henry Silva), who tries to kill Rima and burn the sacred tree where she lived.

But, what does this have to do with comics? 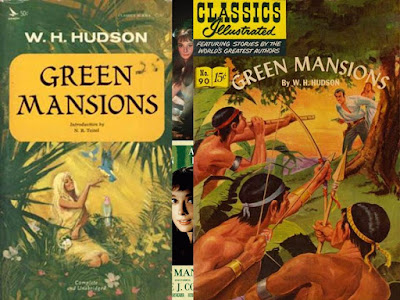 Green Mansions: A Romance of the Tropical Forest was a 1904 novel by William Henry Hudson, about a man (Abel), who ended up in the Venezuelan jungle in the 1840s, meeting Rima, a young woman who was raised alone in the jungle.  Originally found by natives with her mother, who spoke a strange bird-like language, and was thought to possess mystical powers after Rima grew to 7 years old, with the natives trying to kill Rima, but luck keeping her alive and spreading rumors of her magical powers. 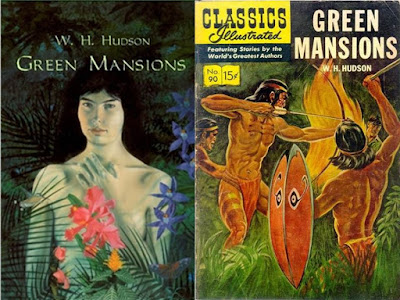 Rima lived in peace until the coming of Abel, who stirred strange feelings in now 17 year old girl.  Rima and Abel found her mother's home, burned down by the natives who took advantage of Rima's people and killed them.  Kua-Ko and the natives then followed Rima to her sacred tree and burned it and Rima, killing the girl.  Abel killed Kua-Ko, and collected Rima's ashes, looking for forgiveness for bringing ruin to Rima.  This story found it's way into Classics Illustrated #90 (December, 1951), with the adaptation being written by George Lipscomb, and art by Alex A. Blum. 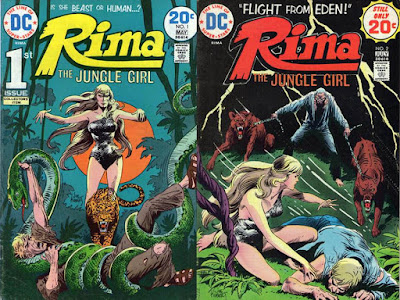 All this eventually led to DC adapting the Green Mansions story (very loosely), and making the hero more of a Tarzan or Sheena-type of character, with their 7 issue Rima the Jungle Girl series, that starting in April-May, 1974.

With covers and interior layouts by Joe Kubert, and stories by Robert Kanigher and finished art by Nestor Redondo, Rima the Jungle Girl #1 tells the story of how Rima found Abel, with Rima the Jungle Girl #2 (June-July, 1974), has Rima telling Abel the story of how she is accepted by the animals and can communicate with them via sounds, and how the jungle accepts her.  Abel returns to the village, and one of the Indians, Runi, is surprised that he returned, as Rima usually captures the souls of those who venture into the forest (which, because Abel has decided he loves Rima, and returns to her, Rima has captured Abel). 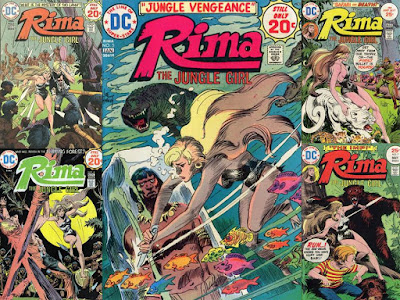 Rima's adventures protecting the Venezuelan jungle and dealing with Abel continue on (loosely adapting the novel through issue #4 and then going beyond), until Rima the Jungle Girl #7 (April-May, 1975, in an issue drawn by Abe Ocampo, the only variation in the series) and showcase encounters with the natives and animals, as well a hunters who want to destroy the jungle. 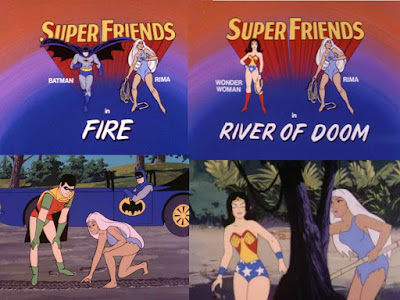 Oddly, this series led to Rima making three appearances on the cartoon Super Friends, working with Wonder Woman, Batman and Robin...and taking on a more Tarzan like role of tracking, hunting and communicating with animals, instead of being the protector of the forest and preserver of the animals as she had been previous portrayed. 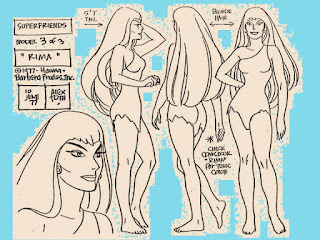 Rima appeared in Super Friends Season 2 episodes "Fire" premiering October 1, 1977, with Batman and Robin and fighting juvenile criminals and a forest fire, and searching for scientists on October 22, 1977 with the "River of Doom" with Wonder Woman, and in the 1980 short on October 25th, the "Return of Atlantis" (with Wonder Woman, rescuing Aquaman, as this wasn't his Atlantis!).  Rima even got a design sheet by noted artist, Alex Toth (who had done design work for the entire show!). 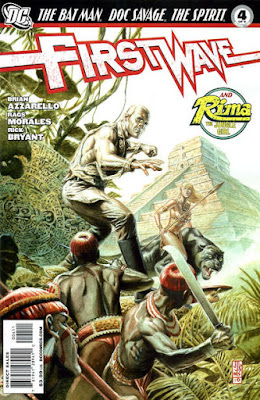 Sadly, Rima has pretty much disappeared, getting only a mention in Alan Moore's League of Extraordinary Gentleman #3 (from the second run in 2002), and then being revamped (with only one cover appearance in First Wave #4 of November, 2010 by J.G. Jones) in DC's First Wave, a union of pulp heroes including Doc Savage and the Spirit (along with an early Batman).

Still, since Rima began her existence by dying, one should be forgiven for hoping to see her again!