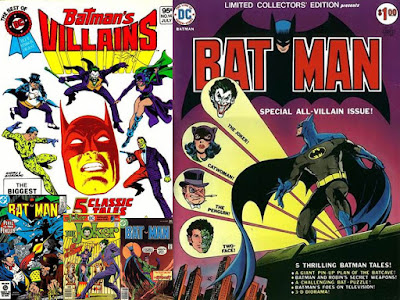 Back in the 1970s and 1980s, there was a push on making Batman's five most dangerous foes...the Riddler, the Penguin, Two-Face, Catwoman and the Joker.... 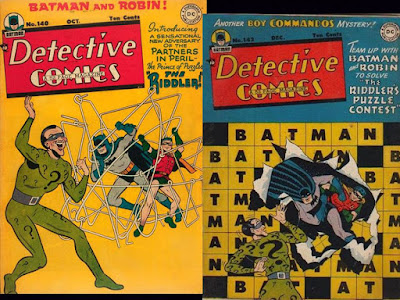 Edward Nigma cheated to beat puzzles, and used that ability to take on the identity of the Riddler in Detective Comics #140 (October, 1948 by Bill Finger and Dick Sprang), wherein Batman and Robin solved the Riddler's puzzles and thought him dead, at least until Detective Comics #142 (December, 1948); these two tales being Riddler's only Golden Age appearances (both reprinted in Batman Archives #7, and the first in the Batman: Featuring Two-Face and the Riddler tradepaperback). 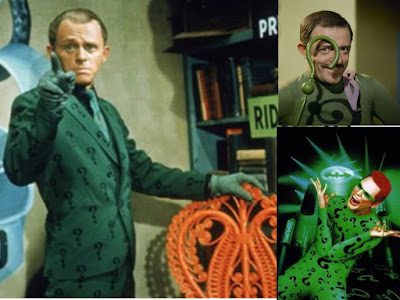 If not for an appearance in Batman #171 (May, 1965) and Frank Gorshin's Riddler on the 1960s Batman TV series and 1966 Batman movie (though John Astin subbed for Gorshin for a season) and being portrayed by Jim Carrey in Batman Forever...

...the Riddler might have only been a big question mark! 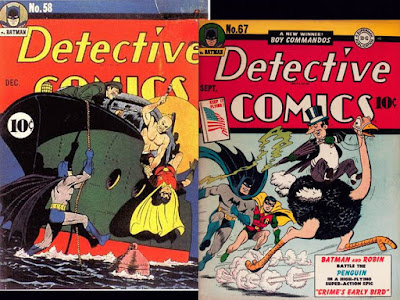 Oswald Cobblepot began his career as an art thief, stealing painting from a gallery in Detective Comics #58 (December, 1941 by Bill Finger, Bob Kane and Jerry Robinson, with this tale bring reprinted in the Batman Archives #2, Greatest Batman Stories Ever Told tradepaperback #2, and in Batman Chronicles #5).  This bird came back to face Batman many times during the 1940s, but didn't get his first cover appearance until his fourth appearance in Detective Comics #67 (September, 1942). 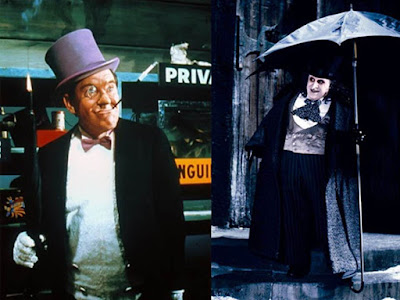 This bird came to life and rose to fame played by Burgess Meredith in Batman TV show and 1966 movie...

...and helped the screen time fly by as portrayed by Danny DeVito in Batman Returns, continuing to waddle along and threaten the Caped Crusader! 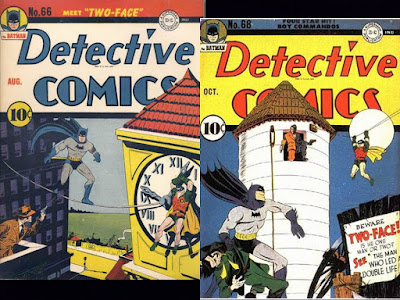 Harvey Kent was Gotham's district attorney, pressing a case against Boss Maroni, until Moroni threw acid at Kent, scarring his half his face and turning the lawyer to crime, using Maroni's two-faced coin (with one side now scarred) to make decisions on how to proceed, starting with Detective Comics #66 (August, 1942, by Bill Finger, Bob Kane and Jerry Robinson), and the tale concluding in Detective Comics #68 (October, 1942, where he appropriately made his first cover in his second appearance) and both tales can be found in the 100-Page Super Spectacular DC-20, Batman Archives #2,  the Batman: Featuring Two-Face and the Riddler tradepaperback, Batman vs. Two-Face tradepaperback and Batman Chronicles #7.  Two-Face's alter ego's last name was switched (with no explanation) to Dent in Batman #50 (December-January, 1948-1949). 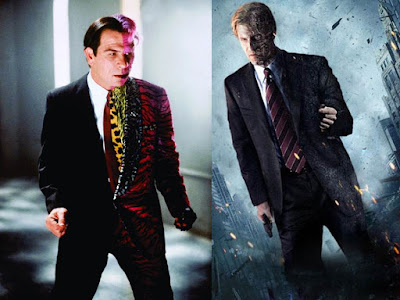 Sadly, Two-Face never made it into the Batman TV show, but did make (appropriately) a pair of movie appearances, in Batman Forever (played by Tommy Lee Jones) and in the Dark Knight (played by Aaron Eckhart)...

...for twice as much fun as any other foe! 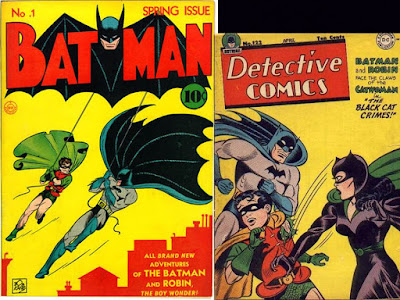 Selina Kyle began her career as a jewel thief called the Cat in Batman #1 (Spring, 1940, by Bill Finger and Bob Kane), and changed to the Catwoman in Batman #2 (Summer, 1940) after helping Batman find the Joker (with both villains escaping the dynamic duo).  Surprisingly, it took until Detective Comics #122 (April, 1947) for this femme fatale to make a cover of a Batman comic book! 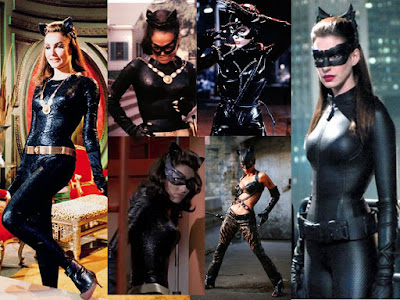 ...by Michelle Pfeiffer in Batman Returns, by Halle Berry in her own Catwoman movie (though she wasn't Selina Kyle), and by Anne Hathaway in The Dark Knight Rises. 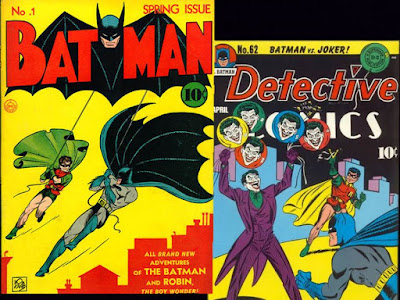 This criminal was a jack of all trades, menacing Batman and Robin twice in the very first Batman issue (Batman #1 of Spring, 1940 by Bill Finger and Bob Kane), and returned again and again to menace Batman and Robin (as well as other villains like Catwoman and Penguin, as well as the whole of Gotham).  Joker made his first Batman comic cover with Detective Comics #62 (April, 1942...quite the April's Fool joke indeed!). 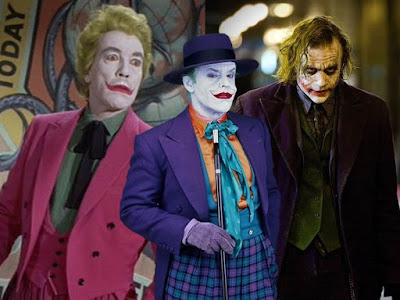 Joker also is one of the most popular of Batman's live action foes..

...being portrayed by Cesar Romero in the Batman TV show and 1966 movie, getting a load of him as Jack Nicholson in the 1989 Batman movie, and very seriously by Heath Ledger in the Dark Knight. 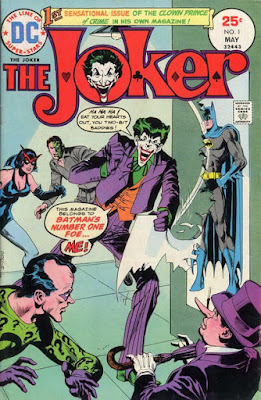 Joker and Catwoman were both in Batman #1, and all the Batman stories of that issue were in Famous First Edition F-5, Batman: The Dark Knight Archives #1, Millenium Edition: Batman #1 and the Batman Chronicles #1!

Let no one play you for a fool as to who Batman's MAIN foe is...and if you don't know, then the joke is on you! 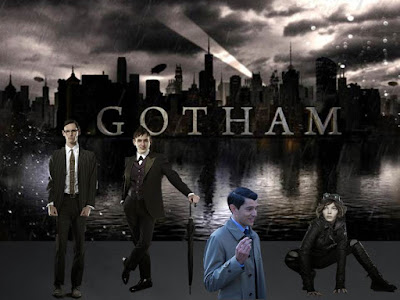 Though Joker has been teased on two episodes of the first season of Gotham, with promises of more in its second season, the show still focuses on everyone else...Edward "Riddler" Nygma as played by Corey Michael Smith, Oswald "Penguin" Cobblepott portrayed by Robin Lord Taylor, Harvey "Two-Face" Dent played by Nicholas D'Agosto and Selina "Catwoman" Kyle played by Camren Bicondova...all helping to build the legend of Batman.