Moon Man and Lady Lunar vs Superman and Batman 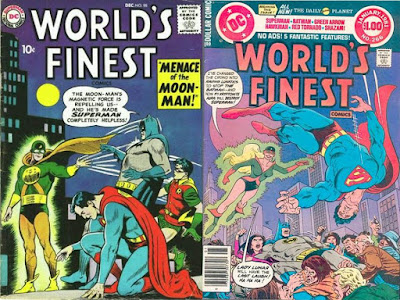 It's been a while since there has been "one small step for man"...

....yet, the effects of going into space and landing on the moon have been felt by the heroes of Earth...

...just take a look at Moon Man and Lady Lunar! 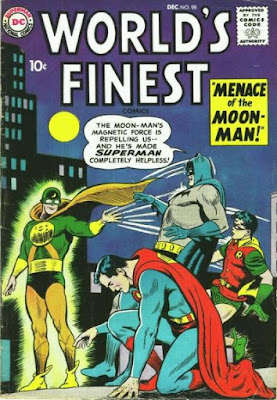 Astronaut Brice Rogers got powers from exposure to a meteor in space while orbiting the moon, and changing into the Moon Man in the "Menace of the Moon-Man!" in World's Finest Comics #98 (December, 1958 by Bill Finger and Dick Sprang)!  The Moon Man was a separate entity that would take over Brice, and gave him the powers to effect gravity (attracting items or pushing them away), as well as the ability to hypnotize people (afflicting them with a temporary lunacy)....all under the moon's influence (and living a normal life during the day).

There must have been some green kryptonite in that meteor as well, as the green glow Moon Man put off weakened Superman...and it took the help of Batman and Robin to help Brice Rogers see the light of day and be rid of his evil alter ego of the Moon Man! 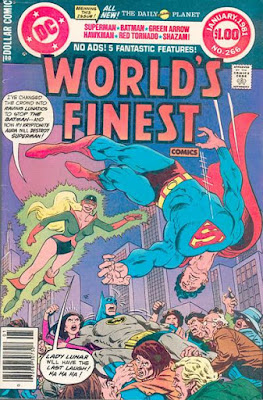 Stacy returned in World's Finest Comics #266 (December-January, 1980/1981 by Cary Burkett and Rich Buckler) working for S.T.A.R. Labs as a guest speaker, and being exposed to the capsule of Brice Rogers.  There must have been some meteor dust left, as when Stacy was standing next to Rogers' capsule and struck by moonlight, she changed into Lady Lunar!

As Lady Lunar, Stacy's personality split, and she had the same gravity and hypnotic powers the Moon Man did.  Lady Lunar kidnapped Dr. Jenet Klyburn of S.T.A.R. Labs, used her knowledge to help make a bomb (and as bait to capture Batman), and planned to blow up Metropolis under the cover of night.  If not for Superman making solar reflectors to blanket Metropolis with sunlight, Lady Lunar may have succeeded! 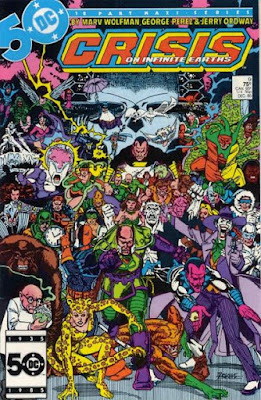 Lady Lunar's days were not finished after that...she returned again as one of the villains to face the heroes  in Crisis On Infinite Earths #9 (December, 1985), where she faced the Doom Patrol's Negative Woman (and even made it to the cover of this villain filled issue!).


One never knows what dooms could be unleashed on mankind if Moon Man or Lady Lunar returned...

Posted by Dave's Not Here Comic Blog at 1:32 AM