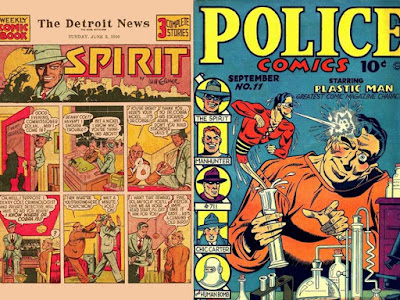 You may know of Denny Colt, the man who was the Spirit...creation of Will Eisner that first appeared June 2nd, 1940 in a syndicated Sunday supplement by the Register and Tribune Syndicate that continued until October 5th, 1952, wherein Denny Colt faced menaces such as the crimelord the Octopus, P'Gell the femme fatale, childhood crush Sand Saref, mad scientist Dr. Cobra, adventurer Silk Satin all for Commissioner Dolan, often with help from the chief's daughter (and Spirit's girlfriend), Ellen Dolan and sidekick Ebony White all in a stylish blue suit,  white shirt, red tie and domino mask armed pretty much only with his wit and determination. 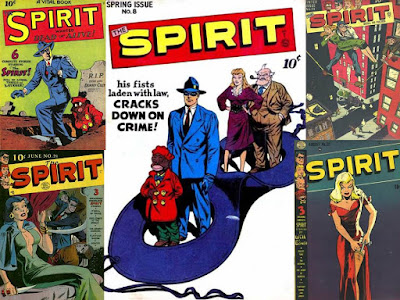 This could have been the end of the Spirit, but Will Eisner was a smart businessman as well, and owned the rights to his character....and ended up having 2 comics of the Spirit in the 1960s at Harvey Comics (known more for characters like Richie Rich, Little Lotta, Little Dot and Casper the Friendly Ghost). 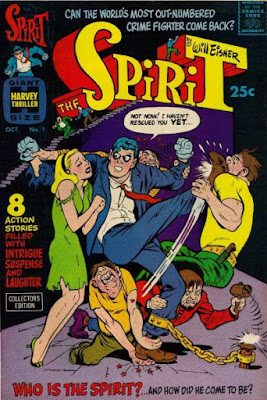 Harvey Comics' Spirit #1 came out in October, 1966, with 8 stories including a new origin for the Spirit written and pencilled by Will Eisner (with an inking assist by Chuck Kramer) to lead off the book (it was the third version of his origin, but still just Denny Colt going off to fight crime and thinking he died, becoming the Spirit....)...


...with 7 other stories from 1948 and 1949 newspapers, and an "interview with the Spirit" by Marilyn Mercer, as well as a 2 page featurette by Will Eisner called the "Spirit Lab Invincible Devices".

Not bad for 25 cents (a large amount to spent on a comic in those days....it was a "Giant Size Harvey Thriller" after all!). 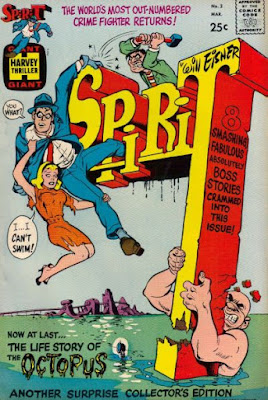 Harvey Comics Spirit #2 came out in March, 1967, and was also a larger issue, with a new story by Will Eisner and to lead it off...this time featuring the Octopus, who was given an alter ego, Zitzbath Zark, for the first time, as well as an origin tale here.

There was a two page text feature by Marilyn Mercer wherein the Spirit answers your mail...as well as a 2 page story likely inspired by the Man from U.N.C.L.E. by Will Eisner in the "Spirit Lab, The Man from MSD" as well as 7 different reprints of newspaper features from 1948 through 1950. 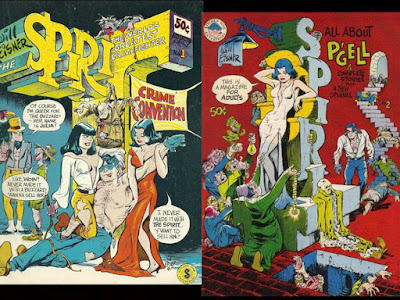 These two comics showed the Spirit (and Will Eisner) was able to adapt to the times, and find a home no matter the odds, dealing with everything including the kitchen sink (ironic, as Kitchen Sink Press was the next home of the Spirit in the 1970s!).