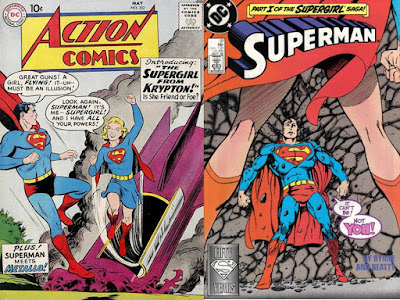 Before Supergirl came to Earth, whether as Superman's Kryptonian cousin (like Kara Zor-El/Linda Lee Supergirl in Action Comics #252 in May, 1959) or via another dimension (like the Matrix Supergirl in Superman #16 in April, 1988, though she didn't make a cover until Superman #21)... 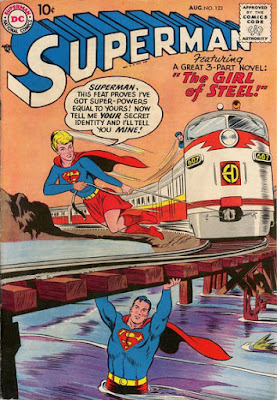 In Superman #123 (August, 1958 by Otto Binder and Dick Sprang), Superman met "The Girl of Steel".  Jimmy Olsen found a mystic totem that allowed him three wishes, and his first wish was to get a perfect mate for Superman...a Super-Girl!

She didn't last, and Jimmy's other two wishes for Superman didn't turn out so well either....with crooks taking the totem and wishing away Superman's powers, and Superman getting a chance to meet (though Jimmy spelled it "mate") his parents (so Superman help Jor-El and Lara become a couple!). 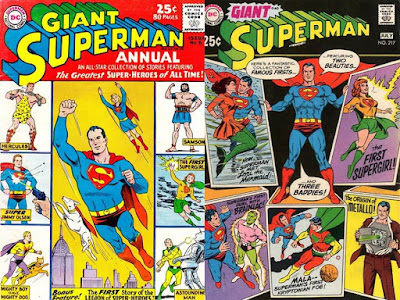 Odder still, when this story was reprinted in Superman Annual #6 (Winter 1962-1963) and in Superman #217 (June-July, 1969)...they only used the first 10 pages of the story (leaving off the second two wishes), and Super-Girl was colored to look a little more like Lana Lang...(which, oddly, is whom the Matrix Supergirl post-Crisis on Infinite Earths was based on as well!).  Great Caesar's Ghost! 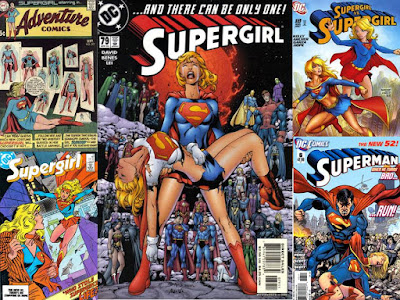