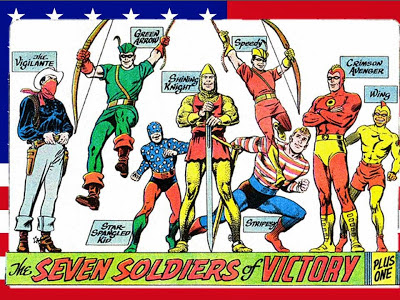 If you've followed this blog, you might remember a little about the Seven Soldiers of Victory's members, the Green Arrow, Speedy, Vigilante, The Shining Knight, the Star Spangled Kid, Stripsey, the Crimson Avenger and Wing (and yes, that was 8 members, but hey...what's one extra between friends?). 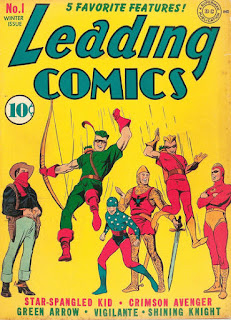 This bunch of heroes gathered in Leading Comics #1's "Blueprint For Crime" to fight the Hand, a criminal who thought he was dying, and gathered the greatest villains of the time (or at least those he had access to)...


…Green Arrow’s foe, Professor Merlin from More Fun Comics #75…Star-Spangled Kid’s adversary, the Needle, who first appeared in Star-Spangled Comics #4…Red Dragon, who fought the Shining Knight in Adventure Comics #69…and a few new villains, Big Caesar to fight Crimson Avenger and the Dummy to face the Vigilante; these were to be his “fingers of crime”…

...and the team continued to fight on! 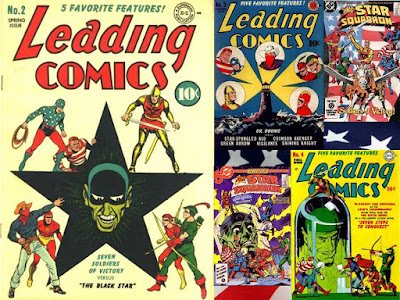 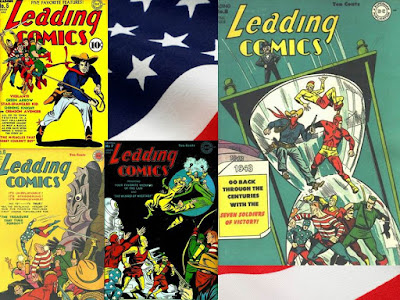 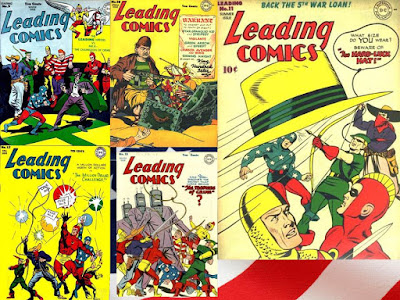 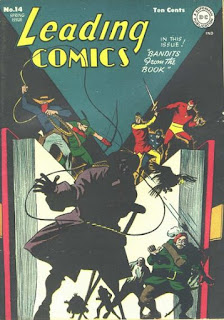 ...and taking on fictional characters (like Long John Silver) freed from their books in Leading Comics #14 (Spring, 1945, by Joe Samachson and Arthur Cazeneuve, the last of the Golden Age adventures of the Seven Soldiers); getting aid from Vigilante’s partners, Billy Gunn (first in Action Comics #43, December, 1941) and Stuff the Chinatown Kid (Jimmy Leong, premiering in Action Comics #45, February, 1942) and the Shining Knight’s flying horse, Winged Victory! 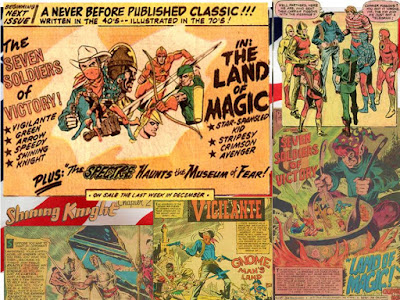 Then, the team disappeared….at least, for the world to see. Crimson Avenger and Wing had lost their spot in Detective Comics, but the other members still had individual adventures (and, one last Seven Soldiers story saw print in the mid-1970s in Adventure Comics, from Adventure Comics #438-443), using a script from Joe Samachson, who wrote most of the team’s last Leading Comics stories, with art by Dick Dillin on the whole team, Howard Chaykin on Shining Knight, Lee Elias drawing Green Arrow & Speedy, Mike Grell working on Crimson Avenger & Wing, Ernie Chan doing Star-Spangled Kid & Stripsey, and Jose Luis-Garcia Lopez rendering the Vigilante, all during their magical battles with Willie Wisher…and, oddly enough, this is the only Seven Soldiers story pre-1980s that has NOT be reprinted, as DC has gathered the 14 issues of Leading Comics in three Seven Soldiers of Victory Archives. 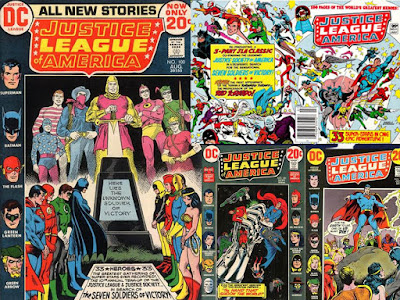 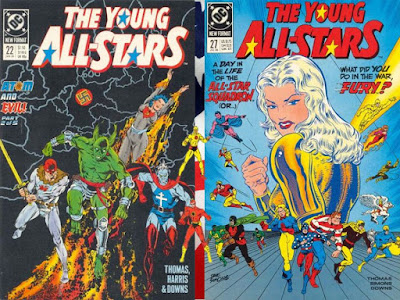 It was the Crisis on Infinite Earths that messed up the Law’s Legionnaires taking out Green Arrow and Speedy’s World War II tales (which we saw a little more of in All-Star Squadron) and, eventually having them replaced by the Squire, an English youth that befriended the Shining Knight in Roy Thomas‘ Young All-Stars (who would be a Knight of his own, who first appeared as the Knight in Batman #62, December, 1950).. 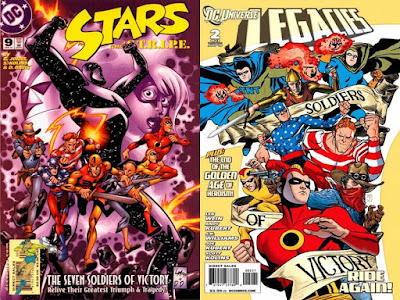 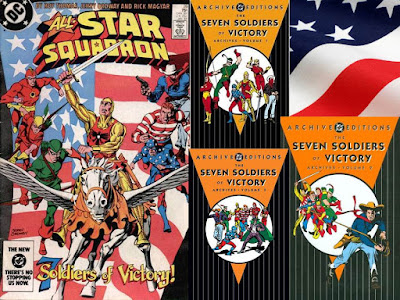 This was not the end of the Seven Soldiers of Victory...

...but it is the end of our coverage for now!