Strange Tales of the Frightful Four 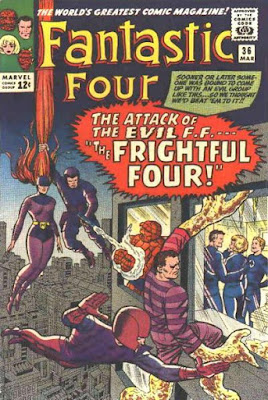 The Frightful Four were a collection of villains that first faced the Fantastic Four on Reed and Sue's engagement in Fantastic Four #36 (March, 1965, by Stan Lee and Jack Kirby).

But, most of these villains had appeared before in Strange Tales, which featured the Human Torch in solo tales (and later, partnered with the Thing)! 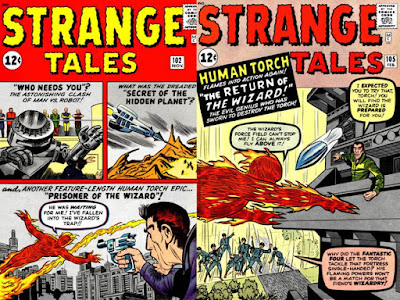 The first of these foes to appear (in Strange Tales #102, November, 1962 in "The Prisoner of the Wizard" by writers Stan Lee and Larry Lieber and artist Jack Kirby) was the super-genius Wizard, who gained fame as a chess champion and escape artist (abandoning his real name of Bentley Wittman to make "the Wizard" his legal name.  Worried that the Fantastic Four would steal his fame, the Wizard tries to ruin the Torch's name by impersonating Johnny and committing crimes in his name...and Johnny is saved with a little help from his sister Sue (the Invisible Girl). 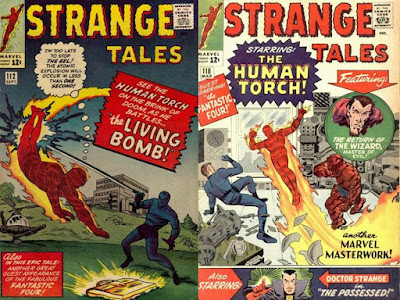 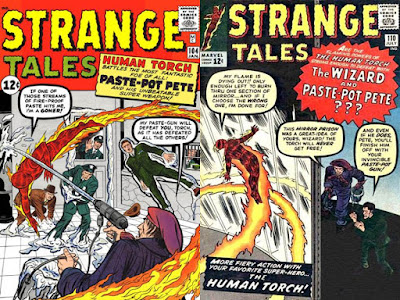 Trapster was originally called Paste-Pot Pete, and was a villain who first menaced the Human Torch in Strange Tales #104 (January, 1963 in "The Human Torch Meets Paste-Pot Pete" by Stan Lee, Larry Lieber and Jack Kirby).  Peter Petruski tried to use his paste-gun to rob banks, and ran afoul of the Human Torch...and Paste-Pot Pete then tried to move up in the criminal world, taking a U.S. Army missile to sell to the Soviets, but that backfired, with Paste-Pot Pete sticking himself to an airplane wing and escaping to sea. 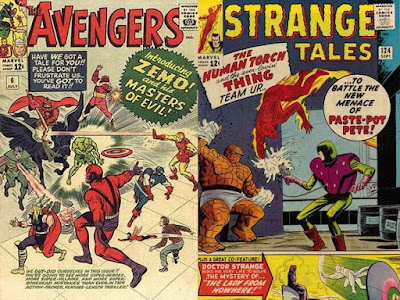 Paste-Pot Pete returned in Strange Tales #110 (July, 1963 in "The Human Torch vs. the Wizard and Paste-Pot Pete!" by Stan Lee, H. E. Huntley and Dick Ayers), wherein the two villains paired up to face off against the Human Torch, but Pete didn't like being bossed by the Wizard, and the two were captured and sent to jail.  Pete then quickly helped the Avengers in Avengers #6 (July, 1964), providing the Avengers with a solvent to dissolve Baron Zemo's Adhesive-X during a battle with the Masters of Evil, which must have been enough to get Pete out of prison.  Pete didn't learn his lesson, returning with new weapons to face the Human Torch and the Thing in Strange Tales #124 (September, 1964 in "Paste-Pot Pete" by Stan Lee and Dick Ayers), where Pete causes trouble for the Thing and the Human Torch.... 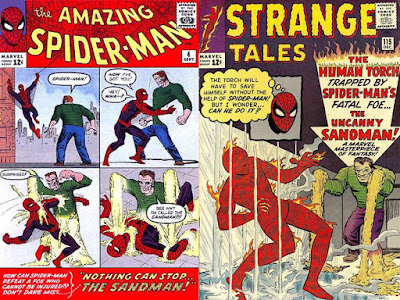 Sandman started off as a Spider-Man foe in Amazing Spider-Man #4 (September, 1963 in "Nothing Can Stop the Sandman" by Stan Lee and Steve Ditko), with Flint Marko breaking out of prison, and being exposed to radiation which turned him into the man of living sand, the Sandman (though being defeated by Spider-Man...and a vacuum cleaner!). 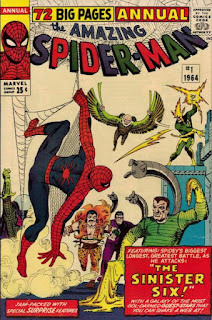 Sandman soon broke free, and faced the Human Torch in Strange Tales #115 (December, 1963, in "The Sandman Strikes" by Stan Lee and Dick Ayers), where the Human Torch defeats the Sandman with a sprinkler system while Spider-Man waits!


Sandman then teams up with five other Spider-Man foes like Kraven, the Vulture and Electro to form the Sinister Six in Amazing Spider-Man Annual #1 (October, 1964 in "The Sinister Six" by Stan Lee and Steve Ditko, proving that the Sandman was willing to be a team player...). 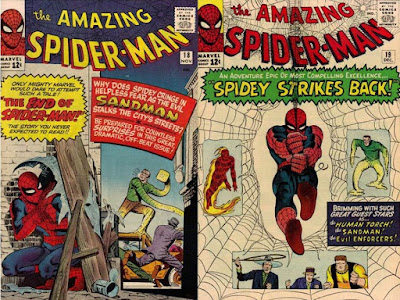 Sandman returned again in Amazing Spider-Man #18 and #19 (November and December, 1964 in "The End of Spider-Man" and "Spidey Strikes Back" both by Stan Lee and Steve Ditko), wherein Spider-Man eventually defeats Sandman (with the Human Torch watching in the last issue). 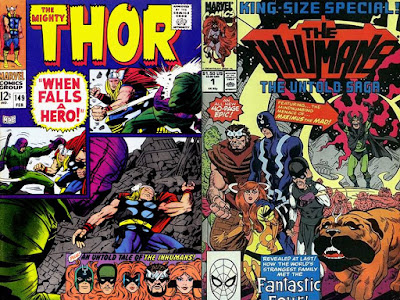 Medusa first appeared in Fantastic Four #36, never making an appearance in Strange Tales, but had a bit of history before that...mostly with her somewhat strange family, the Inhumans!

Medusa was there when Maximus made Black Bolt unleash the power of his voice (which was quite destructive) in Thor #149 (February, 1968 in the flashback tale "Silence Or Death" by Stan Lee and Jack Kirby), when the Inhumans moved their city in What If? #30 (December, 1981 in "Moving Day" by Peter Gillis and Ron Wilson), and then in the Inhumans Special #1 (April, 1990 in "Remembrances of Revolutions Past" by Lou Mougin and Richard Howell) wherein Maximus caused Medusa's amnesia, and she ended up in Europe as a thief, and met the Frightful Four. 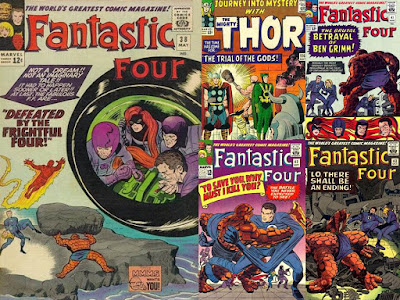 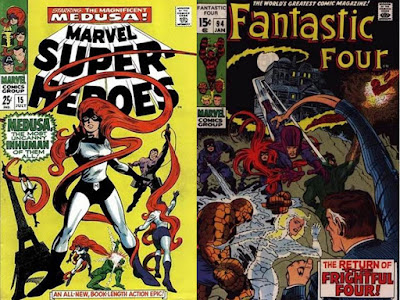 Medusa confronted the Frightful Four one last time in Marvel Super-Heroes #15 (July, 1968) and Fantastic Four #94 (January, 1970) (though both the Wizard and the Sandman made individual runs at the Fantastic Four before this point. both with new and improved uniforms)...

...at which point, the Frightful Four realized that they'd need a new fourth member... 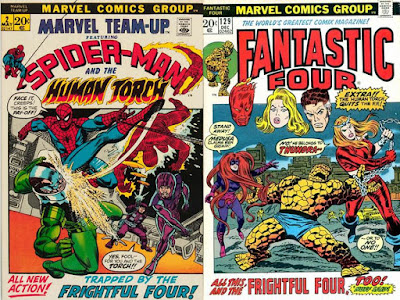 After a brief battle with Spider-Man and the Human Torch in Marvel Team-Up #2 (May, 1972), they then reunited and tried to add super-strong Thundra in Fantastic Four #129 (December, 1972)...

...then began a long search for a fourth member, which included characters like the Brute, Electro and the Klaw among others, and the tales of the Frightful Four get stranger! 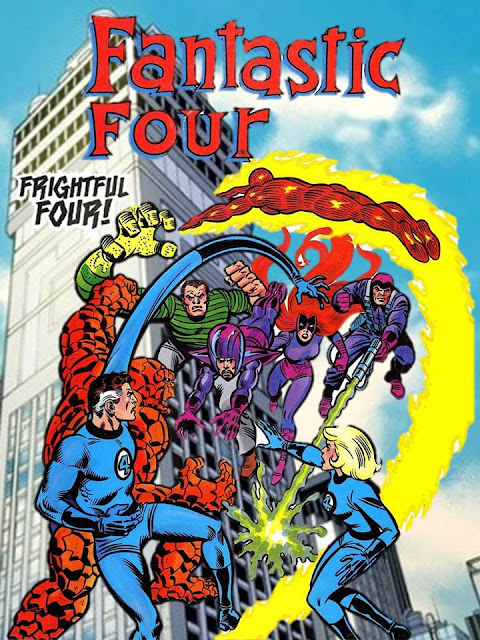