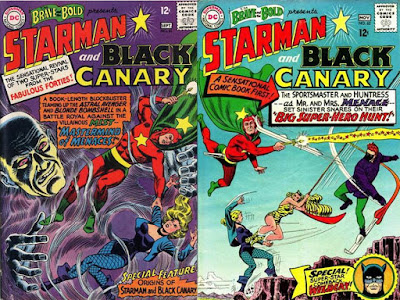 One of the things Roy Thomas did with the mini-series, America vs. the Justice Society, was to provide noted comic fan Rich Morrissey's list of reprints of Golden Age stories about the members of the Justice Society (and all of comic fandom owes these two for their work in saving the early years of comics!).

So, we'll update that list a little with two favorites (who got covered well over the years), Starman and Black Canary (and, hey, they appeared together on these two Silver Age Brave and the Bold covers by artist Murphy Anderson!). The Golden Age Starman's first story, "The Amazing Starman" by Gardner Fox and Jack Burnley, Adventure Comics #61 (April, 1941), was reprinted in Justice League of America #94 (November, 1971), as well as later getting the entire issue redone as the Millennium Edition: Adventure Comics #61 (December, 2000). 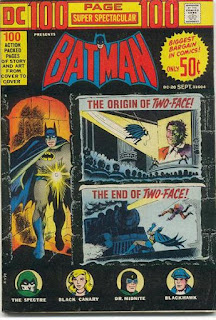 Starman's next reprinted tale , that of Adventure Comics #66 (September, 1941), with the story "The Case of the Camera Curse" by Gardner Fox and Jack Burnley, made it into the 100-Page Super-Spectacular DC-20 of September, 1973...


...and also includes a few other Golden Age reprints, of folks like the Spectre, Dr. Mid-Nite and more all under a cover by artist Nick Cardy, who was quite the cover sensation of the 1970s! 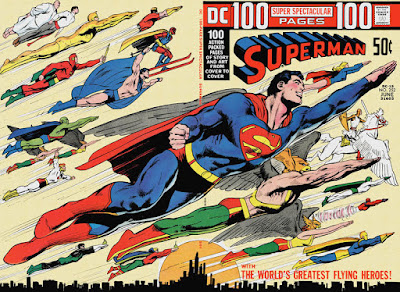 Adventure Comics #67 (October, 1941), had the first appearance of Starman's major foe, the Mist, with the story "The Menace of the Invisible Raiders" by Gardner Fox and Jack Burnley, and was reprinted in Superman #252 (June, 1972) under a high flying cover by Neal Adams (and a few other Golden Age stories of Dr. Fate, the Spectre, Hawkman and Hawkgirl and more), and later in the Greatest Golden Age Stories Ever Told hardcover of 1990. Adventure Comics #77 (August, 1942), with the story "Finder's Keepers" by Gardner Fox and Jack Burnley, featured the return of the Mist in his second and last Golden Age appearance before appearing in Brave and the Bold #61...


...and was reprinted in Wanted: The World's Most Dangerous Villains #6 (February, 1973), that featured a cover by Nick Cardy, and Golden Age stories of Wildcat and Sargon the Sorcerer as well! 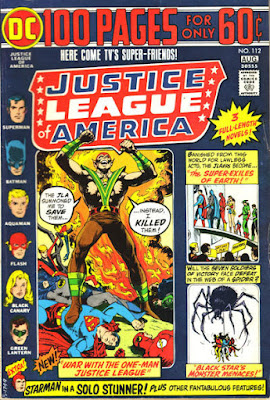 ....it got reprinted in Justice League of America #112 (July-August, 1974) under a cover by Nick Cardy, along with a new JLA story with the team facing the android Amazo, a JLA reprint, and the second half of a Seven Soldiers of Victory reprint, which is all good reading! 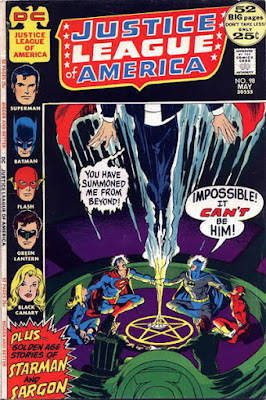 Adventure Comics #92 (June-July, 1942) was the last of the earlier reprints of Golden Age Starman, with the story ""The Three Comets" by Joe Samachson and Emil Gershwin...


...this story made it into Justice League of America #98 (May, 1972), with a cover by Neal Adams, and a Golden Age Sargon reprint as well (and Sargon being in the current Justice League story on top of that!).


But, best of all, all of Starman's solo appearances were later gathered together... 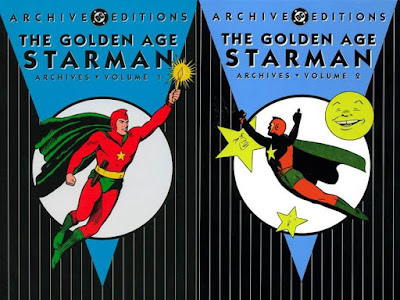 You can also read about when Starman Ted Knight joined the JSA by clicking here. 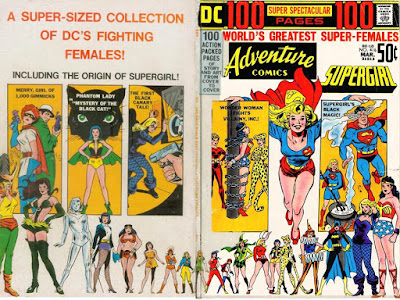 The Golden Age Black Canary first appeared as a foe of Johnny Thunder in Flash Comics #86 (August, 1947), in the story "The Black Canary" by Robert Kanigher and Carmine Infantino...

...and it was reprinted in Adventure Comics #416 (March, 1972, also knows as DC 100-Page Super Spectacular DC-10), featuring a cover by Bob Oksner, and stories on female DC characters, like Wonder Woman, Phantom Lady, Merry the Girl of 1000 Gimmicks and Supergirl! 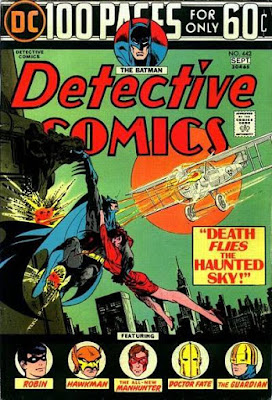 
...where she took over the feature from Johnny Thunder, with the story "The Huntress of the Highway" by Robert Kanigher and Carmine Infantino, and gained a friend in detective Larry Lance, so it's ironic that this story was reprinted in Detective Comics #442 (August-September, 1974) with a cover by Jim Aparo, and Golden Age Batman, Dr. Fate and Newsboy Legion stories as well, and new Batman and Manhunter stories to boot. 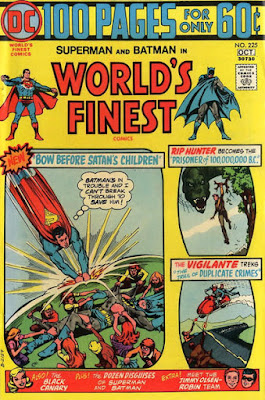 ...and this story was reprinted in World's Finest Comics #225 (September-October, 1974) that also reprinted a Golden Age tale of the Vigilante, as well as the first appearance of Rip Hunter all under a cover by Nick Cardy!

With all that as well as some Superman and Batman goodness as well, we can forgive them for barely featuring Black Canary on the cover (a shame, because Nick Cardy drew a lovely Black Canary!  So, maybe we won't forgive DC, but we'll try.). 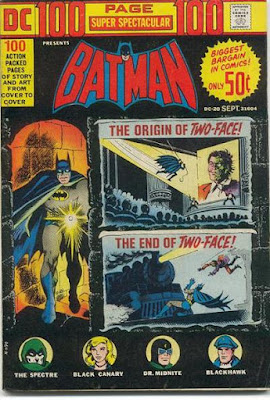 Flash Comics #95 (May, 1948) featured the story of "An Orchid For the Deceased" by Robert Kanigher and Carmine Infantino, with Larry Lance moving his detective office into Dinah Drake (a.k.a. Black Canary's) flower shop...

...and this story moved into the 100-Page Super-Spectacular DC-20 of September, 1973, with Nick Cardy providing the cover, and the book featuring quite a treasure of Golden Age stories, including Batman facing Two-Face, and the Spectre, Starman, Dr. Mid-Nite and Blackhawk! 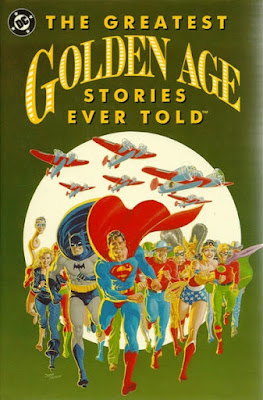 Flash Comics #96 (June, 1948) contained the story of "The Riddle of the Topaz Brooch" by Robert Kanigher and Carmine Infantino...

...and while it didn't make the original list in America vs. the Justice Society, it was reprinted in the Greatest Golden Age Stories Ever Told hardcover of 1990, which featured a stunning cover by Jerry Ordway, and many Golden Age stories that were, well, just great, and featured a few other JSAers like Hawkman, Wildcat, Sandman, Flash, Green Lantern, Superman, Wonder Woman, Batman and the Spectre as well!


This was the end of the list in America vs. the Justice Society, but not the end of Black Canary Golden Age stories.

A few of her original stories were found, and presented later.... 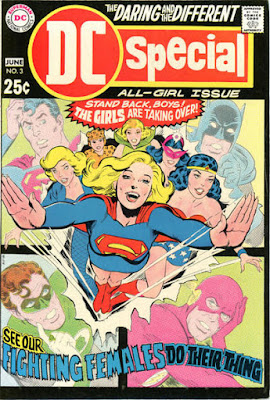 ...all under a cover drawn by Neal Adams and Nick Cardy, giving us double the artistic goodness (and a few good stories to read as well, like a Golden Age Wonder Woman and Cheetah battle that was also unreleased until this issue, as well as the first appearance of the Silver Age Star Sapphire, a story about Flora and a super Supergirl story!). 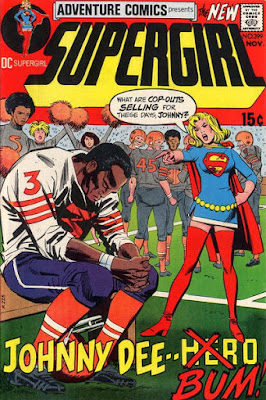 Last, but not least, is the Black Canary story in Adventure Comics #399 (November, 1970), where "Television Told The Tale" (though it was written by Robert Kanigher and drawn by Carmine Infantino, not the boob tube)...


...Black Canary didn't make the cover, but Supergirl did (as she was the main feature of Adventure Comics at this time), and it was drawn by Mike Sekowsky and Dick Giordano.


Better still, there is one more collection of Black Canary reprints.... 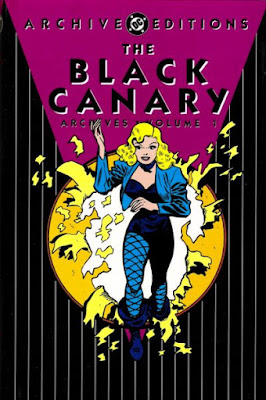 The Black Canary Archives #1 of January, 2001 has all of Black Canary's solo Golden Age stories from Flash Comics #86 to Flash Comics #104 (even if the first few were technically Johnny Thunder stories), as well as the story from Comic Cavalcade #25 (February-March, 1948), the previously unpublished DC Special #3 and Adventure Comics #399, the Brave and the Bold stories (#61 and #62) with Starman, AND Silver Age Black Canary stories from Adventure Comics #418 and #419 (April and May, 1972), and you can read about how Black Canary joined the JSA here, and the difference between Black Canaries here..

...sadly, not all Golden Age JSAers got as many stories collected, but check back as we'll look back again!
Posted by Dave's Not Here Comic Blog at 4:00 AM