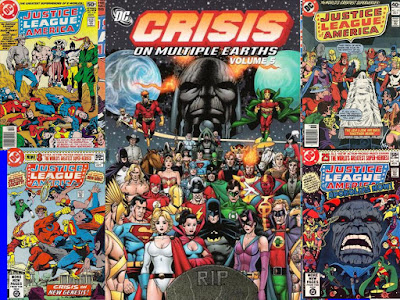 History time again, and how appropriate that is for this batch of JLA/JSA team-ups, since they all involve a bit of history.

Time to look back at a few meetings of the Justice League and Justice Society.... 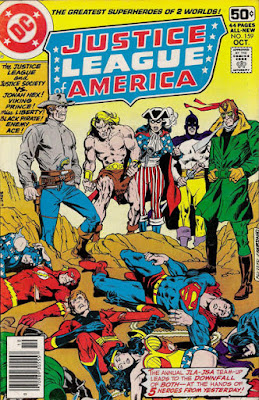 Now that the JLA and JSA could easily cross worlds thanks to their Transmatter Machine, the JLA and JSA decided to have a party on Earth-1's Gotham in Justice League of America #159 (October, 1978) by Gerry Conway, Dick Dillin and Frank McLaughlin, but, as the cover by Rich Buckler and Dick Giordano, there were some party crashers!

Before getting to the battle, a chance to review with the JLA and JSA, as they took the time...Earth-1 Batman reflects on his meeting with the Earth-2 Huntress in Batman Family, Earth-2 Flash says his life is supposedly easier after revealing his identity to the world in DC Special Series #11 (or so he says to Earth-1 Flash), Earth-2 Green Lantern was starting a back up in Earth-1 Green Lantern's title, and the JSA had just ended their All-Star Comics run with issue #74..... 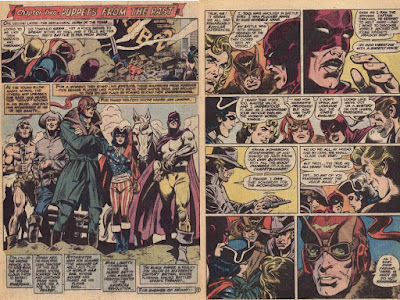 The heroes of today were attacked by History's Heroes...Jonah Hex, Viking Prince, Miss Liberty, the Black Pirate and the Enemy Ace!  These past heroes were plucked out of time by the Lord of Time (himself tired of battle from manipulations he had with Kamandi and Karate Kid), had retreated to a place "out of time" where he had constructed the Eternity Brain, a machine that would help him take whatever he wanted...by stopping time! 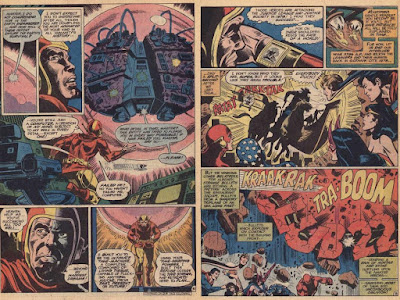 But, the Lord of Time found out that if he stopped time, he would be unable to start it again, and the Eternity Brain was set in its plans.  So, he plucked five heroes from history, gave them powers and set them to beat the JLA and JSA, thinking that if the teams were given a solid defeat, they would come back even more powerful, and, tracing back History's Heroes, would come and stop the Eternity Brain!

The JLA and JSA members at the party were all rendered comatose, except for JLA members (Superman, Flash, Elongated Man and Hawkman), and JSA members (Dr. Mid-Nite, Wonder Woman, Star-Spangled Kid and Huntress).  They remaining members faced History's Heroes again, and lost...giving the Lord of Time hope they now had the fight in them to defeat the Eternity Brain.... 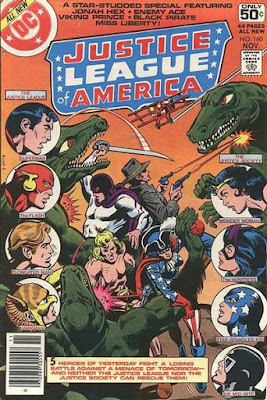 Picking up from the last issue, Justice League of America #160 (November, 1978) by Gerry Conway, Dick Dillin and Frank McLaughlin (with cover by Dillin/McLaughlin), had Superman reflecting on the attack by History's Heroes (he recognized Miss Liberty and the Enemy Ace, Flash knew of Jonah Hex, and Elongated Man had heard of the Black Pirate, though no one knew of the Viking Prince).

The JLA/JSA were using a modified Cosmic Treadmill to go to where the Lord of Time was, his castle outside of time...all as History's Heroes were attacking the Lord of Time's castle as well, but finding out it was well defended by the Eternity Brain.  Meanwhile, back in 1978, Aquaman (who had been late to the party due to being on monitor duty), was working to revive the comatose heroes. 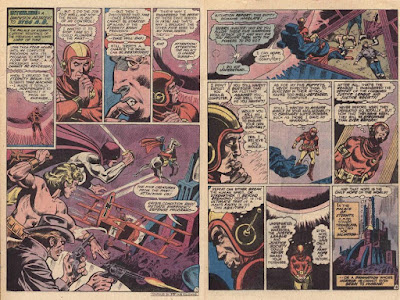 Still, the eight active JLA/JSAers were assaulting the Lord of Time's floating castle, but slowly being eliminated by his various time traps....until only Elongated Man remained, to find the Lord of Time pleading with the Eternity Brain to not go on....and, through an act of bravery, Elongated Man stopped the Brain, saving all of time!

Back at the hospital, as after clearing all the heroes of the energy leaving them comatose, Green Lantern was able to follow the trail through time and rescue the others.  After returning History's Heroes to their proper times, the JLA and JSA would recover...even Elongated Man was able to bounce back from his injuries!

Ending on a happy note, the JSA now had to move to being a back up in Adventure Comics (and they were dealing with a sinister plot by the Secret Society of Super-Villains, who were taking on less active members of the team....).

The Murderer Among Us: Crisis Above Earth-One 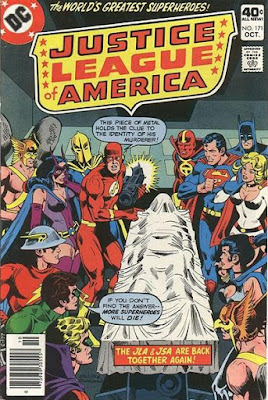 The JSA was recovering from their members being stalked by the Secret Society of Super-Villains, and troubles introduced during their run in Adventure Comics (including the death of a member), when Mr. Terrific returned to the team in their second to last Adventure Comics adventure....which led into Justice League of America #171 (October, 1979) by Gerry Conway, Dick Dillin and Frank McLaughlin, with cover by Dick Dillin and Dick Giordano.

This time, there was a murder among the team while gathered in the JLA Satellite....that of Mr. Terrific, who had wanted to be a part of this gathering, as he told the two Flashes, because of the return of an old enemy of his (and the Earth-2 Flash)... 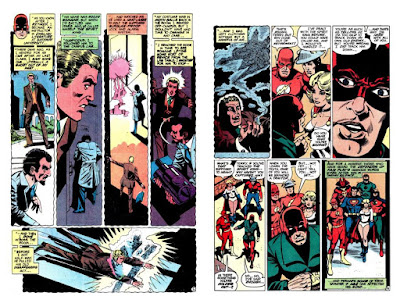 ...the Spirit King (though, this was the first appearance of that villainous alter ego of Roger Romaine).  Mr. Terrific stormed off, then a wall in the Satellite blew, with Superman finding Mr. Terrific dead.  Recent enrolled to the JLA Zatanna tried to trace the identity of the killer off a piece of metal, but a mystic backlash...putting her in a coma, leaving the rest of the present members of the two teams to wonder which of them was the killer! 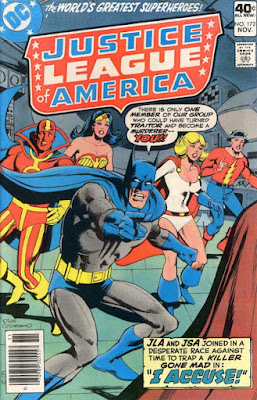 Superman spelled it out in the beginning of Justice League of America #172 (November, 1979) by Gerry Conway, Dick Dillin and Frank McLaughlin (though Batman took center stage on the Dick Giordano cover)...

....that someone on the JLA Satellite must be the killer!

So, Superman had the Green Lanterns and Dr. Fate put a mystic green energy shell around the Satellite so no one could leave...and set the detectives Earth-1 Batman and Earth-2 Huntress into finding out which teammate could have done it.

With Batman going through the clues, and Huntress checking a hunch to see what the Spirit King was stealing in Gateway City using the Transmatter Machine to link to the JSA's Brownstone computers...

...Batman was able to deduce the identity of the killer!

Scroll quickly if you don't want it spoiled! 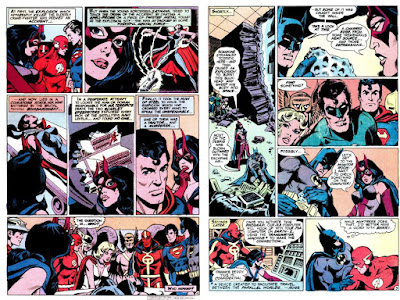 The JLA tries to claim victory even with the villain escaping (as they didn't believe any of the heroes were responsible), but the JSA somberly left the JLA Satellite to go to Earth-2 to bury Mr. Terrific (and, later chronicled in a flashback, finally catch the Spirit King, freeing Jay Garrick Flash from his clutches, in Spectre #54 of the 1990s), and had their last adventure in Adventure Comics in the 1970s.

Where Have All The New Gods Gone? 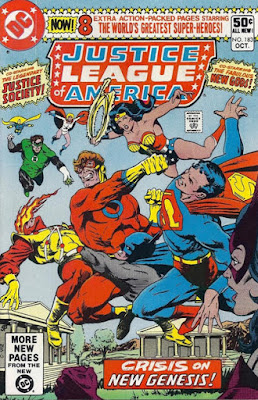 The JLA and JSA were trying something new, half of each team would go to each other's Earths in Justice League of America #183 (October, 1980) by Gerry Conway, Dick Dillin and Frank McLaughlin (under a Jim Starlin cover).  Or at least that was the plan.

The first four of each team were hijacked....and appeared in New Genesis!

JLAer Superman explained where they were (having met the Forever People and been to Supertown once in the days of Superman's Pal, Jimmy Olsen), that this was the home of the New Gods...

....a race of incredibly powerful beings who were forever at war with their opposing numbers from Apokolips. 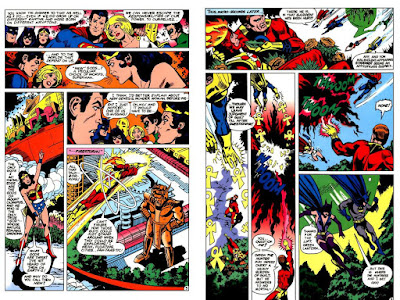 Batman and Green Lantern of the JLA patiently listened, as did Power Girl, Huntress and Dr. Fate of the JSA (though the Earth-2 Wonder Woman was a little put off by the phrase of "New Gods", as she believed in only one...as well as the Olympian deities she believed in).

Firestorm....had wandered off into the empty Supertown...finding Orion, and knocking himself unconscious through the shock.  As Orion was tending to Firestorm, the rest of the teams arrived, and fought Orion, at least until Metron, Mr. Miracle, Big Barda and Oberon arrived via Boom Tube. 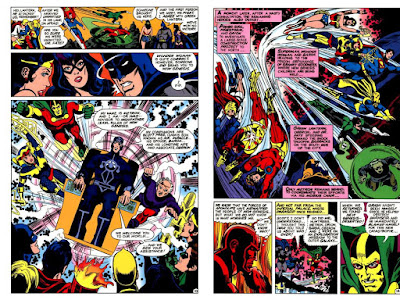 Knowing Mr. Miracle, Superman got the team to listen to him, who explained that Orion was moody due to feeling responsible for this tragedy, as he had recently killed Darkseid, which must have triggered this attack by Apokolips to empty New Genesis, that had been done by members of the Injustice Society (Fiddler, Icicle and the Shade).

The heroes would go to Apokolips and split into teams (coordinated by Metron, who had pulled the JLA/JSA from their Transmatter Machine to New Genesis), to find out where everyone had went.

On a sad note, this was the last issue completed by artist Dick Dillin, who passed away while working on the next issue.  His incredible legacy for all he did for the JLA will always be cherished. 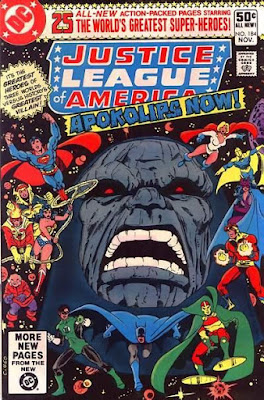 Picking up where the last issue left off, Justice League of America #184 (November, 1980) by Gerry Conway, George Perez and Frank McLaughlin (with cover by George Perez and Dick Giordano), continued the JLA/JSA/New Gods team-up....

with a great deal for the heroes to do all over Darkseid's home planet of Apokolips!

An incredible welcome for new artist George Perez, who was also working on New Teen Titans at the time, even though Dick Dillin had completed about six pages of the issue before he passed, DC had Perez draw this entire issue; the issue also had a few of Dillin's co-workers tell of that artist's great contributions to comics, as well as of his gentlemanly nature, in the letter's page). 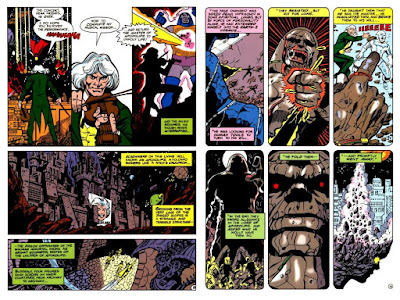 Firestorm, Power Girl and Orion discovered the Injustice Society members reviving Darkseid and the heroes were captured by the villains; Superman (of E-1), Wonder Woman (of E-2) and Big Barda worked their way into Granny Goodness' Orphanage, finding that's where the New Genesis kids were, as well as finding out how Darkseid's consciousness had found its way to Earth-2 after "the final battle" of Darkseid and Orion in Adventure Comics, and how he got the Injustice Society to help him; Green Lantern (of E-1), Dr. Fate and Oberon found Highfather Izaya of the New Gods imprisoned, freed him and the group headed to confront Darkseid, who had an evil plan....and Batman (of E-1), Huntress (of E-2) and Mr. Miracle stormed Darkseid's Imperial Place, where they found out Darkseid's full plan...to transfer Apokolips to Earth-2, destroying the Earth in that dimension! 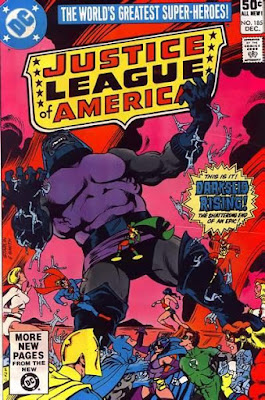 Metron was nice enough to recap the previous two issues in the beginning of Justice League of America #185 (December, 1980) by Gerry Conway, George Perez and Frank McLaughlin (under a Jim Starlin/Robert Allen Smith cover)....


...which was that Darkseid, after being revived by the Injustice Society of the World members of Fiddler, Icicle and the Shade, had planned to have Apokolips "transferred" in time and space...


...and have it take the place of Earth-2, which would destroy that world and give Darkseid a universe of his own to plunder!

The heroes had plenty to do to stop him! 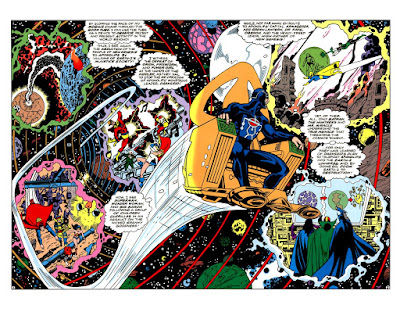 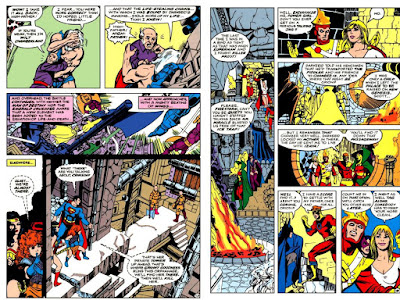 ..all to led Orion and Darkseid battle again as the now freed forces of New Genesis attacked the forces of Apokolips protecting the Re-Creation Machine (which would now transfer Apokolips to Earth-2)....still, all this effort and it was not enough.

Thankfully, Metron used all this distraction to redirect the Re-Creation Machine, having it focused now on Darkseid....which undid his return, defeating him and leaving the members of New Genesis free to go and rebuild their home. 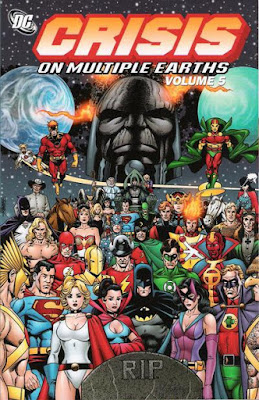 All these tales were collected in fifth volume of Crisis On Multiple Earths (this one with a great George Perez cover combining the heroes of all of the crossovers of these issues)....all while getting ready for the Crisis On Infinite Earths (this volume showcasing the New Gods and History's Heroes, while Earth-X was in Volume 3 and Earth-S was in Volume 4), but one more collected volume was to come!