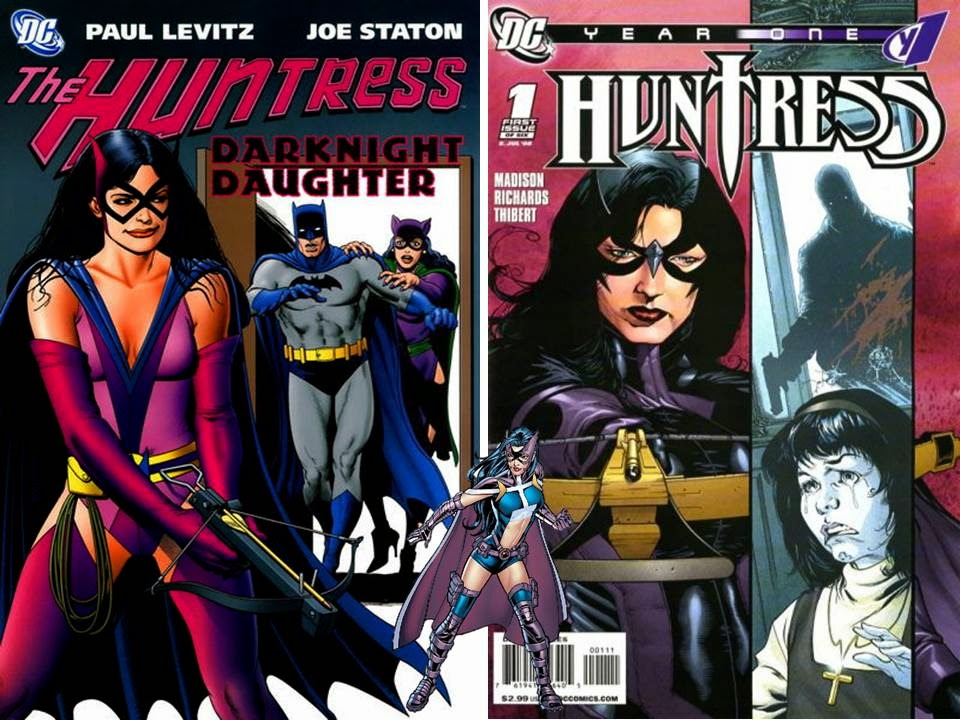 For those who don’t know... 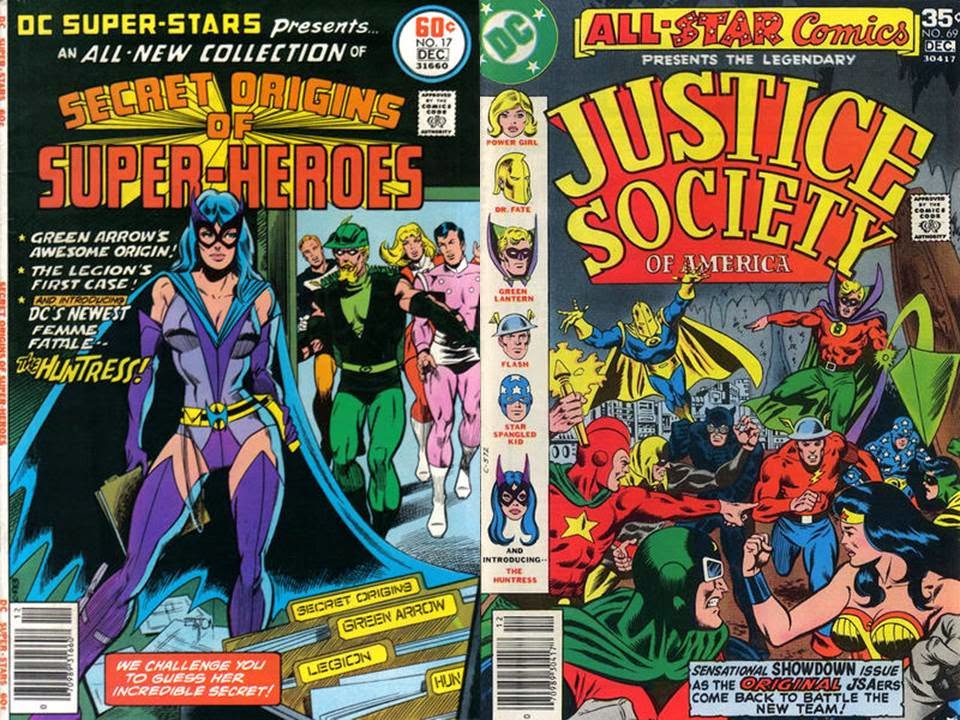 DC’s first heroic Huntress premiered in DC Super-Stars #17 (November-December 1977, created by Paul Levitz, Joe Staton and Bob Layton)….or at least that was where her origin was. All-Star Comics #69 came out at about the same time (and same date – August 24th, 1977, but the All-Star issue labels itself as introducing her), and teased the character in the final panel, but her story was in the Super-Stars issue. (DC Super-Stars had an origin of Green Arrow, written by Denny O’Neil, and drawn by the same man who has done the sketch of “the hood” in the Arrow TV series, Mike Grell!). 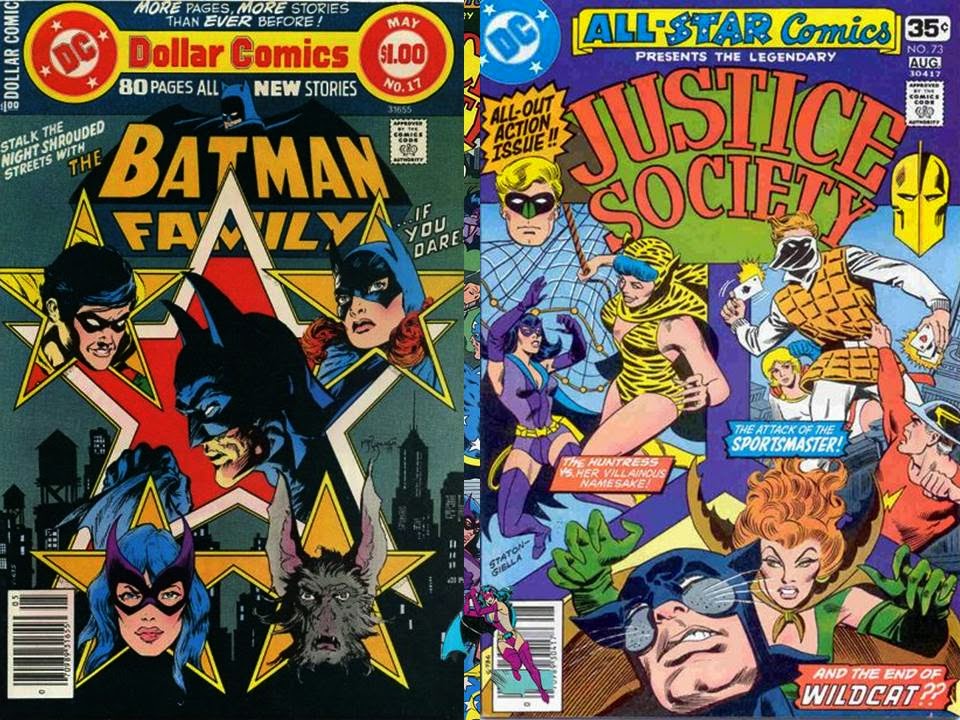 The Huntress was Helena Wayne, daughter of Batman and Catwoman. This happened on Earth-2, where Superman, Wonder Woman and Batman (along with Catwoman) had been around since the 1940s, with the heroes all being members of the Justice Society of America, and had aged together, with Bruce Wayne and Selina Kyle getting married along the way, and producing….Helena!

Her father trained her in criminology, and she also kept fit, but was headed more into a traditional legal career, until a thug killed her mother (and Bruce, as Batman, watched her die in his arms, mostly giving up his career as Batman after this). This event inspired Helena to become the Huntress, and capture her mother’s killer (Silky Chernak, for those keeping score at home). 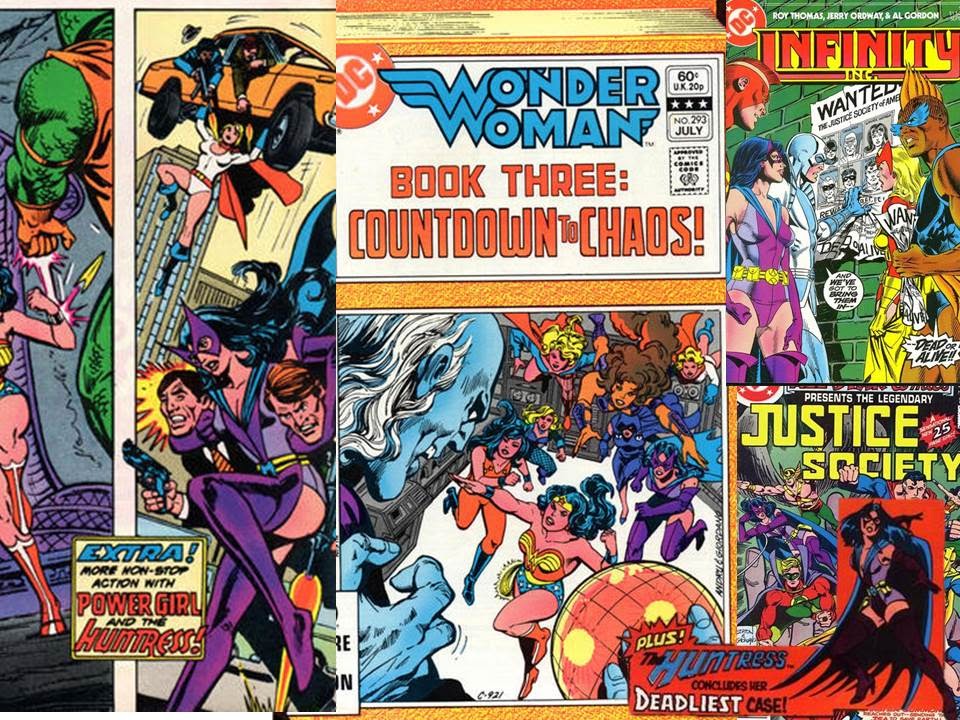 The Huntress soon joined the JSA (providing a nice counterpoint to new member, Superman’s cousin, Power Girl), and had a few adventures with them (and also met her father’s Earth-1 counterpart, who was a charter member of the Justice League of America, and she called him "Uncle Bruce"), as well as adventures of her own (and even fought the Wildcat foe, the Huntress, for the right to her name and dealing with her step-brother, Robin!). Her journey ended with the Crisis on Infinite Earths, when her world was wiped out…and she died as well. 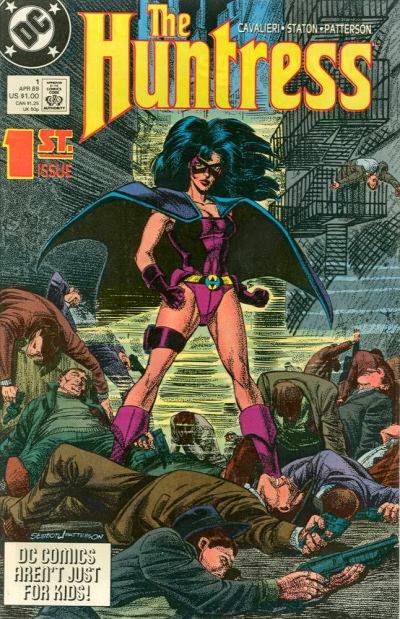 But, the end of her world and existence couldn’t keep the Huntress down.


The Huntress returned as a new character, Helena Bertinelli, in the Huntress #1 (April 1989, by Joey Cavalieri and Joe Staton). Still a purple clad lady with a crossbow fighting crime (and the same purple and blue color scheme, reflecting a relationship to Batman and Catwoman, that wasn’t there this time out), this time out she was a mobster’s daughter, looking to set things straight. 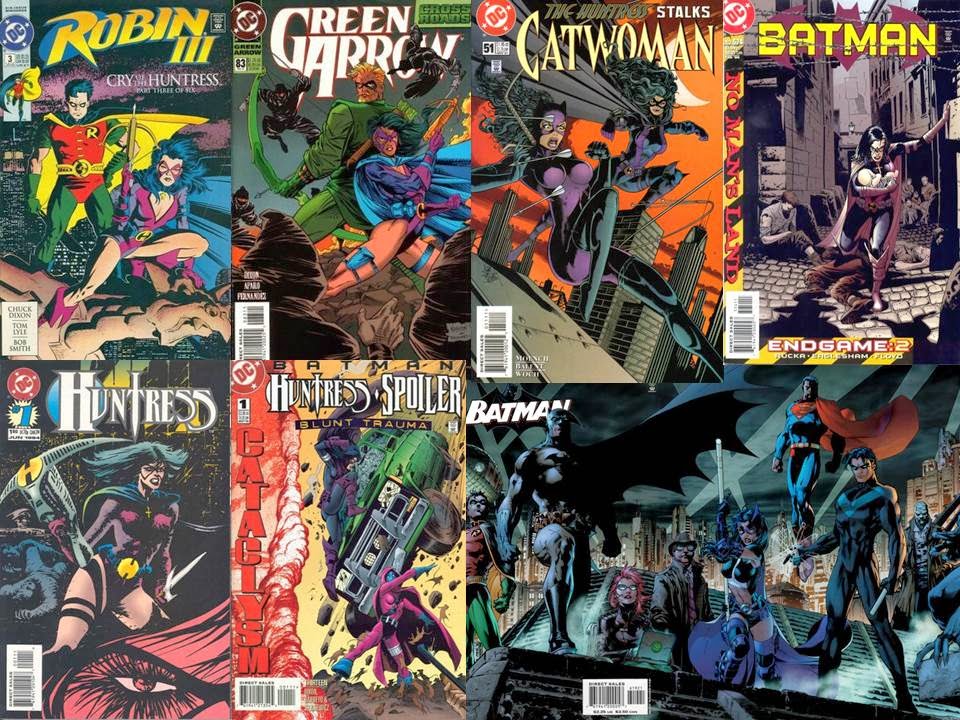 Thanks to Bat-writer, Chuck Dixon, the Huntress didn’t fade away, but instead returned, and kept fighting crime near Gotham. The Huntress was a little too violent for Batman’s tastes, but he encouraged her, and kept on eye on her as well to keep her from going too far. 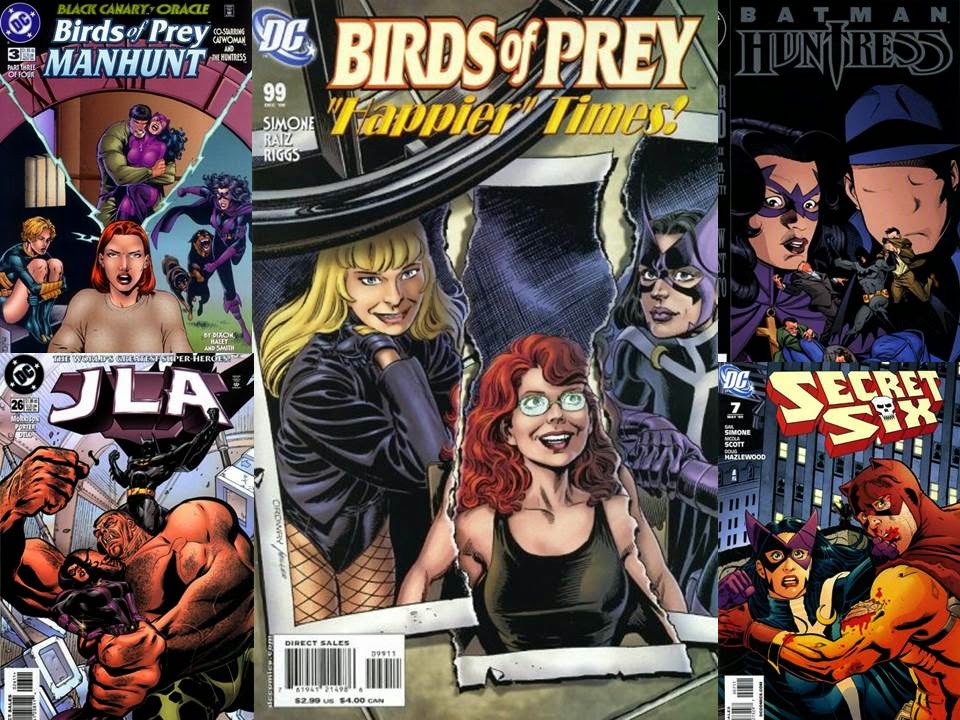 The Huntress also worked with Robin (Tim Drake), rejoined the Justice League for a time, had a relationship with Nightwing (Dick Grayson), fought in Gotham during No Man’s Land and while Hush stalked Batman, and worked with other heroes such as the Black Canary, Catwoman, the Question, Spoiler and Green Arrow, as well as playing a major role in the DC One Million event, and becoming a teacher, before becoming a regular in Birds of Prey (starting with issue #57, September 2003 with Black Canary and Oracle). She even had a little fling with Cat-Man (originally a Batman foe, but moved on to fight Green Arrow, and was a founder of the Secret Six, which also had Deadshot, another Batman foe co-opted by the Arrow…).  Helena even changed the look of her costume a few times along the way…

Same As The Old Huntress 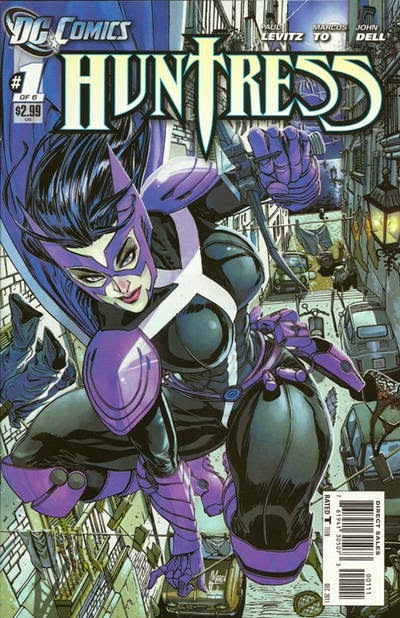 Still, something was off with the Huntress, and with the reset of the DC Universe, Paul Levitz and Marcus To returned Helena to being Helena Wayne with their 6-issue mini-series in 2011-2012.

The Huntress was the daughter of a Batman and Catwoman (from a different Earth-2), but she had been that world’s Robin (and worked with that world’s Supergirl).

The two of them ended up in the regular Earth, and adopted the identities of the Huntress and Power Girl, and are trying to figure out how to get home in the Worlds’ Finest title, also written by Paul Levitz, and with art by George Perez and Kevin Maguire (and even Jerry Ordway, who drew the original Huntress in Infinity Inc., inked her in the later days of her Wonder Woman back-ups, and a few of the mobster Huntress in Birds of Prey… 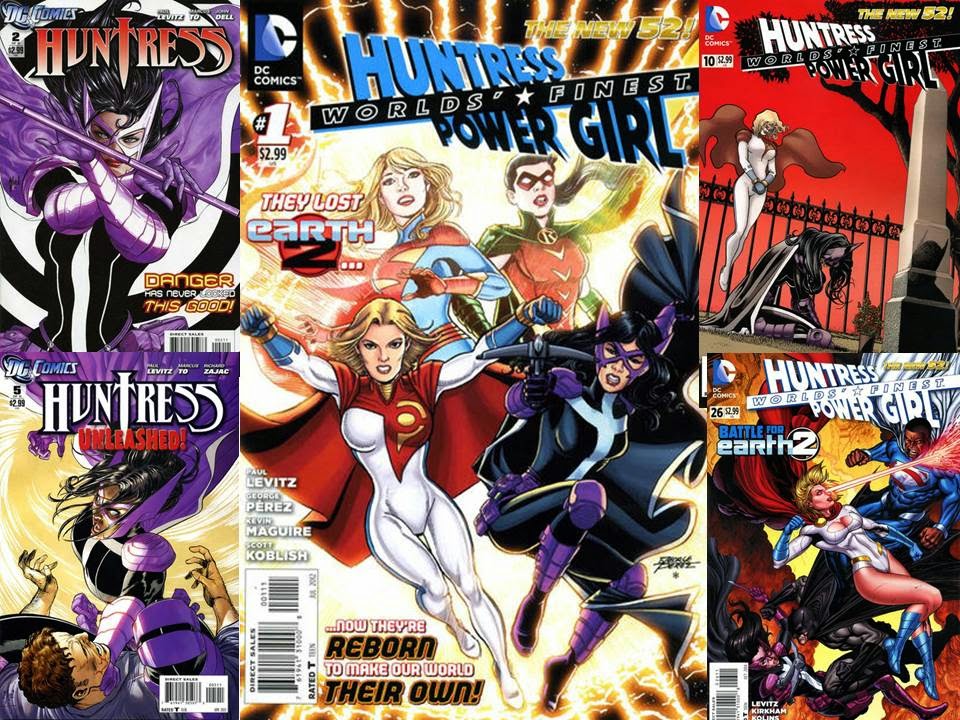 ...so, Worlds’ Finest just needs Joe Staton to return when he has time from his Dick Tracy newspaper series!).

Proving, the more things change, the more they stay the same!
Posted by Dave's Not Here Comic Blog at 6:20 AM