Early Brave and the Bold Team-Ups 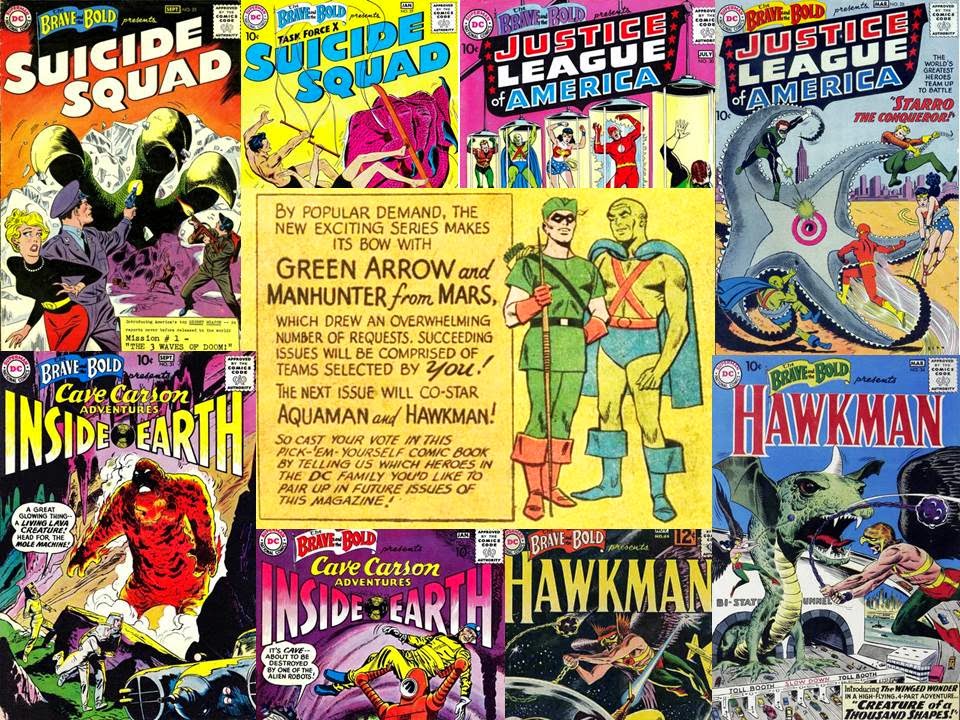 Before Batman, Brave and the Bold had team-ups, starting with issue #50 (October-November, 1963) with the magazine “You ask for” (though one wonders if readers weren’t asking for more Suicide Squad, Justice League of America, Cave Carson or Hawkman…a few series who had tried out in Brave and the Bold before this team-up idea…).

It was really the magazine writer Bob Haney asked for, and was a chance to spotlight some of DC’s stars who were back-up features in other comics at the time….but soon grew into more!

It Ain’t Easy Being Green 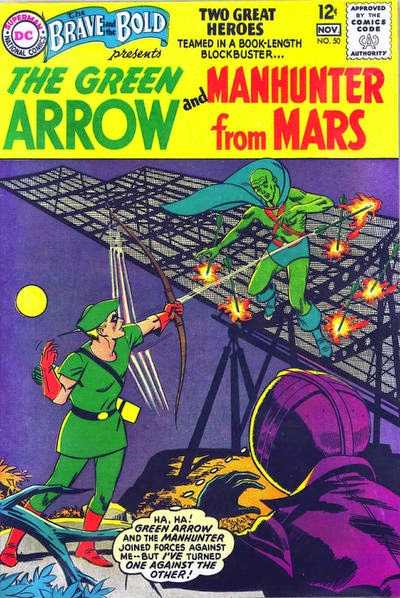 In Brave & the Bold #50 (written by Bob Haney, with art by George Roussos), it was Green Arrow (Oliver Queen) and the Manhunter from Mars (John Jones, or J’onn J’onnz in his native Martian) working together (along with Ollie’s partner, Speedy/Roy Harper) to fight evil Martian Vulkor and his men…Michael Uslan had this to say in the Brave and the Bold Team-Up Archives (March, 2005) “It was the first time either a Green Arrow or a Manhunter from Mars logo appeared atop a comic book. One reason these two characters may have been selected for the first B&B team-up is the success of Batman and Superman in World’s Finest. What DC hero was most like Batman? With his red-clad sidekick, Arrow Car and Arrow Cave, wealthy playboy Oliver (Green Arrow) Queen was certainly at the time being presented as an imitation Batman. And what super-hero was most akin to Superman? But for the fact that his weakness was fire and not Kryptonite, the Manhunter from Mars best qualifies. More likely, this was a way to promote the Martian Manhunter, who would shortly gain his very own cover-featured series beginning in House Of Mystery #143.”

While it might have helped J'onn, it didn’t seem to help Green Arrow and Speedy, who were nearing the end of their run in World’s Finest Comics…and Green Arrow would only have the JLA he joined to appear in for a time. 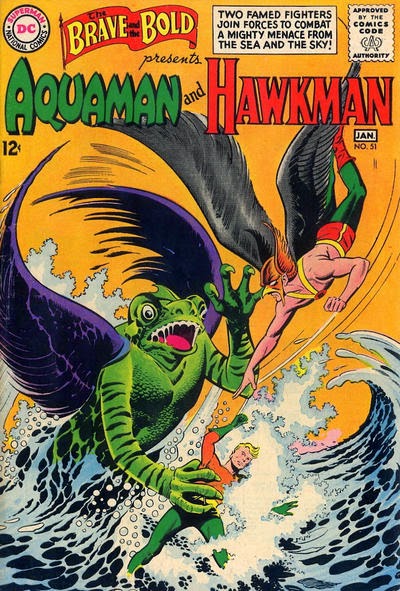 Next up…was Aquaman (Arthur Curry) and Hawkman (Katar Hol, or Carter Hall on Earth) in Brave & the Bold #51 (December-January 1963-1964, by Haney and artist Howard Purcell) that had the two (as well as their partners of Aqualad/Garth and Hawkgirl/Shayera Hol) facing off against Tyros, a man cast out of Atlantis who found a gem that gave him power that he would use to try to take over Aquaman’s home!

Aquaman was losing his space in World’s Finest Comics, but had his own magazine at this time, and Hawkman was a half-feature in Mystery In Space, but soon to get his own comic as well (and soon after that, the Thanagarian would join the Atlantean in the Justice League as well…).


Brave and the Bold Goes To War 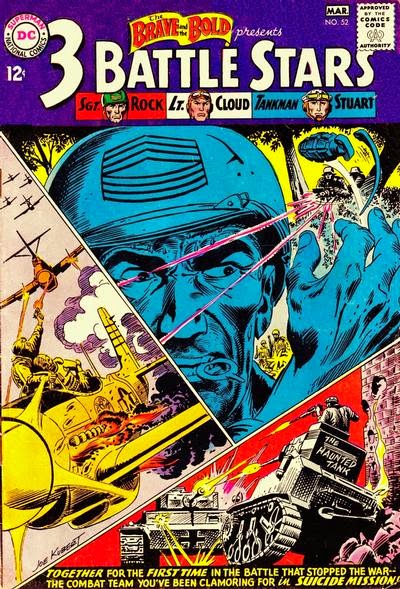 For something a little different, Brave & the Bold #52 (February-March 1964) featured a trio of DC’s war heroes…Sgt. Rock, the Haunted Tank (led by Tankman Stuart) and Lt. Johnny Cloud (the Navajo Ace).  Written by Robert Kanigher with art by Joe Kubert, these 3 battle stars had to work together to save an important agent (codenamed “Martin”) from the Nazis (and, this agent was someone whom they had worked with before!).

Sgt. Rock would come back to Brave & the Bold quite a few times in stories by Bob Haney (but, they weren’t exactly Robert Kanigher‘s favorites, as they featured Sgt. Rock AFTER World War II, which Kanigher didn’t approve of…).

DC’s war titles had characters meet all the time, so this wasn’t quite as special as it was for the other DC heroes…who rarely crossed over at this time. 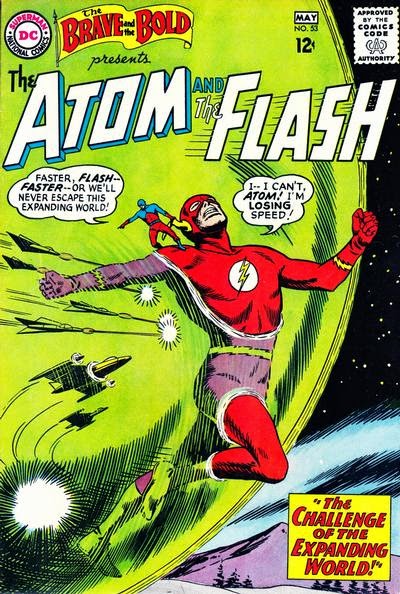 Back to the superheroes, with Flash (Barry Allen) and the Atom (Ray Palmer) in Brave & the Bold #53 (April-May 1964) where these two scientific heroes had to deal with “The Challenge of the Expanding World”…that is, a micro-world that was to expand into and destroy our world!

Written by Haney, with art by the incredible Alex Toth, and a cover by Bob Brown, this story was also reprinted in the Greatest Team-Up Stories Ever Told (1989) and it’s two heroes already had two successful titles of their own, as well as being fellow JLA members!

(A little ironic, that this team up could also happen live, as the Flash TV show ties in with Arrow on the CW, and Atom is a character on the TV show Arrow....where they had Arrow and Flash team up!) 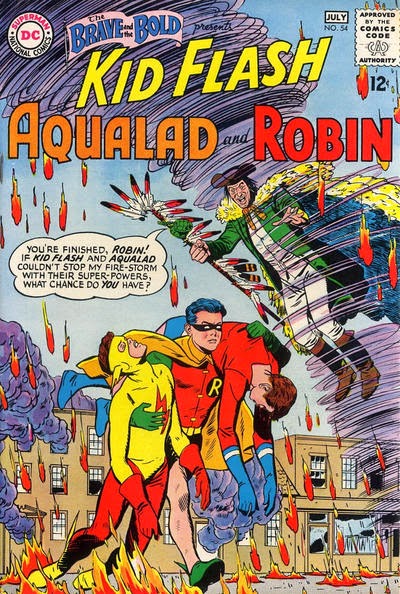 Flash (Barry Allen), as well as Aquaman (Arthur Curry), were back for a little cameo in the next issue, Brave & the Bold #54 (June-July 1964) as well as Batman making his first team-up appearance in B&B (outside of the JLA premiere in B&B #28-30), but they were just there to advise their sidekicks of Kid Flash (Wally West), Aqualad (Garth) and Robin (Dick Grayson)…who were the stars of the issue!  The kids of Hatton Corners were kidnapped by Mr. Twister (Brom Stikk) and it was up to these three to save them!  Thought by many to be the first appearance of the Teen Titans, it just isn't so…even though Bob Haney wrote this issue (with art by Bruno Premiani),  the Teen Titans didn’t get a formal name until later in the Brave and the Bold run…it also seems odd that Speedy wasn’t there…

All of these issues are reprinted in the Brave and the Bold Team-Up Archives (as well as a few more), and those will be coming soon!