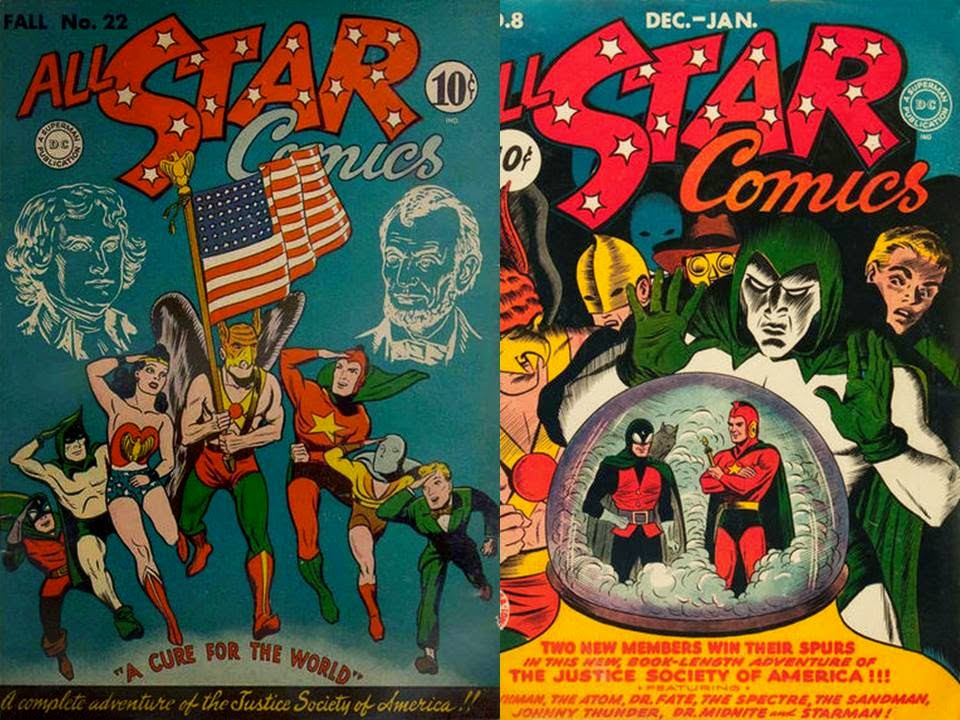 The Justice Society was the first gathering of DC's heroes.

The first additions to their ranks happened very soon after they were formed... 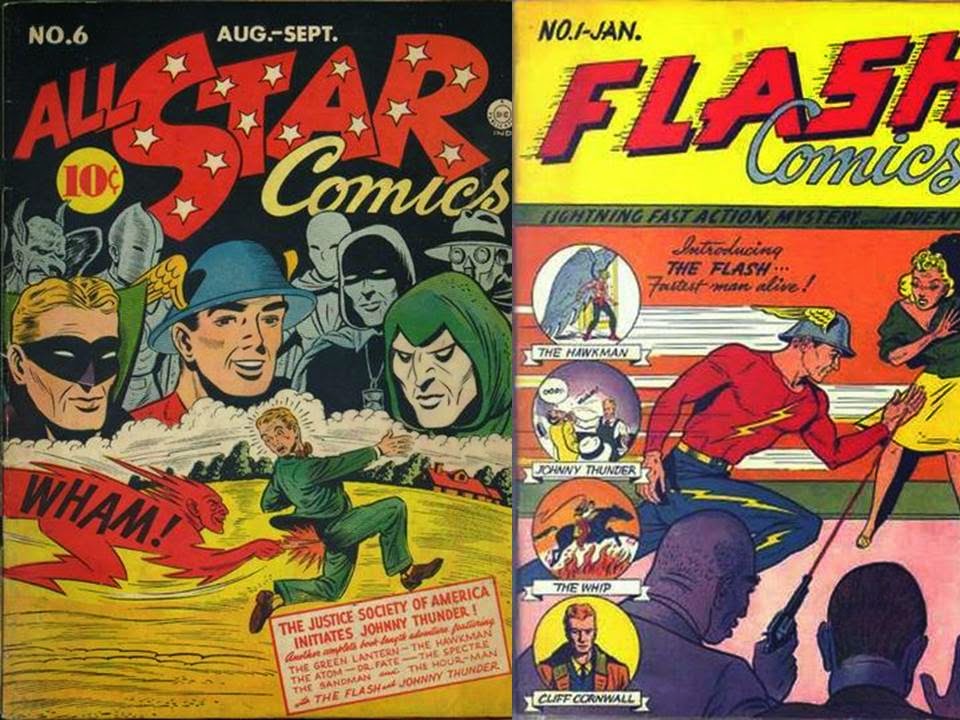 Johnny Thunder was born on July, 7th, 1917, and was quite lucky...being born on the 7th day of the 7th month...this gave him the ability to access a magical Badhnisian Thunderbolt (name later revealed to be Yz) that would do anything Johnny asked, so long as Johnny said the magic words of "Cei-U"...which sounds like "Say, You".  Say, you'd think that would make him all powerful and quite the menace....and it could have, if Johnny wasn't a good guy (and a little slow on the uptake as well).  Premiering in Flash Comics #1 (January, 1940, by John B. Wentworth and Stan Aschmeier) along with JSA charter members Flash and Hawkman, Johnny continued to adventures in Flash Comics (as well as in the New York World's Fair #2, World's Best Comics #1, World's Finest Comics #2 and #3, and later the Big All-American Comic Book, and even appearing in All-Star Comics #2, and guesting with the JSA in All-Star Comics #3 and #4 (and a solo text adventure in All-Star Comics #5) before officially joining the JSA with All-Star Comics #6 (August-September, 1941).  It's a good thing Johnny joined the JSA, or he'd barely be noticed...Johnny and his Thunderbolt didn't end up on many Flash Comics (or any other comics) covers, except for All-Star Comics. 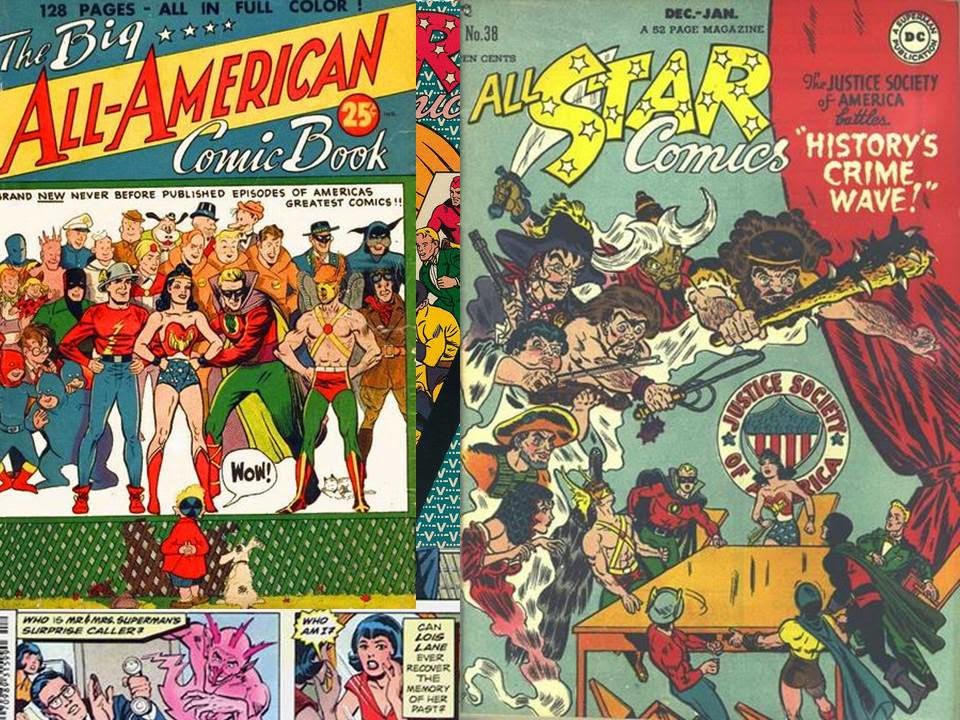 For the most part, Johnny's adventures in the Golden Age were pretty simple, helping out his girlfriend, Daisy Darling and his adopted daughter, Peachy Pet, and foiling crooks...and it was in trying to stop one of those crooks, a femme fatale named Black Canary that he met in Flash Comics #86 (August, 1947), that changed Johnny's life.  Johnny started to work with her, and she started to appear more than Johnny's Thunderbolt, and eventually took over Johnny's spot in Flash Comics (with issue #92, after sharing billing with Johnny in Flash Comics #91, which was also the last Golden Age appearance of the Thunderbolt), and she took over his membership in the JSA in All-Star Comics #41, with Johnny's last Golden Age appearance being in All-Star Comics #39. 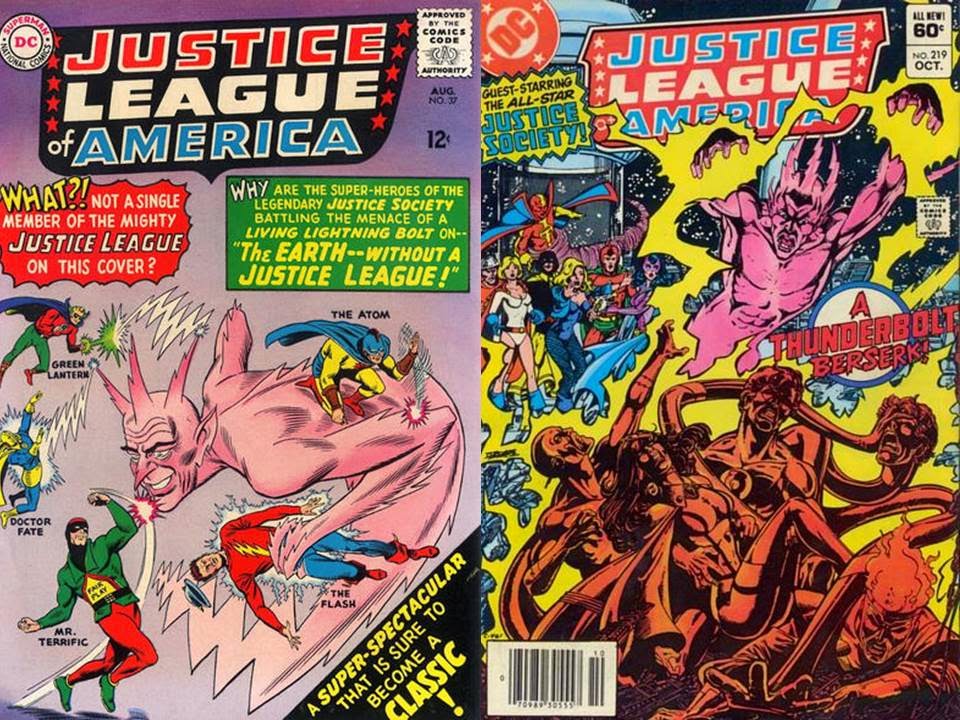 Johnny's absence was partially explained in Superman Family #204 (November-December, 1980 in the Mr. and Mrs. Superman feature), and Johnny returned with the JSA in Flash #137...though the Thunderbolt didn't return until Justice League of America #37, wherein it was revealed that Johnny had an evil Earth-1 duplicate, who also used the Thunderbolt for a time, and this evil Johnny also returned in Justice League of America #38, #219 and #220 (wherein more of Black Canary's history was revealed as well). 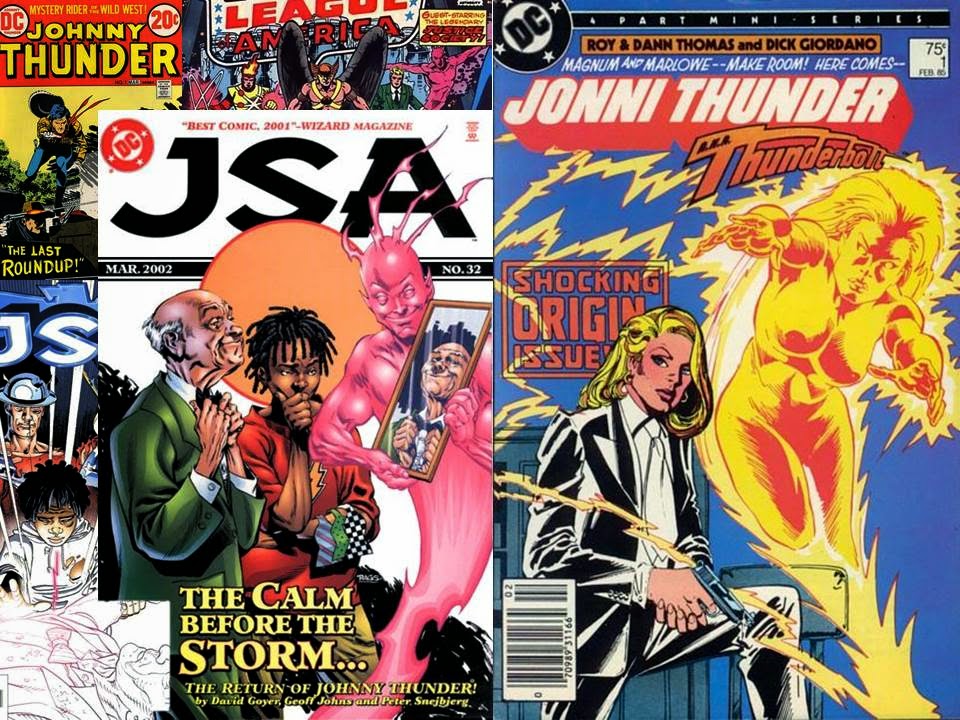 If not for the JSA and JLA, Johnny would likely have been forgotten....but, Johnny had a western hero who had the name...as well as a female Jonni Thunder who was a private investigator who worked with Infinity, Inc.....and later, a kid named J.J. Thunder took up the Thunderbolt as well.

Man of the Stars 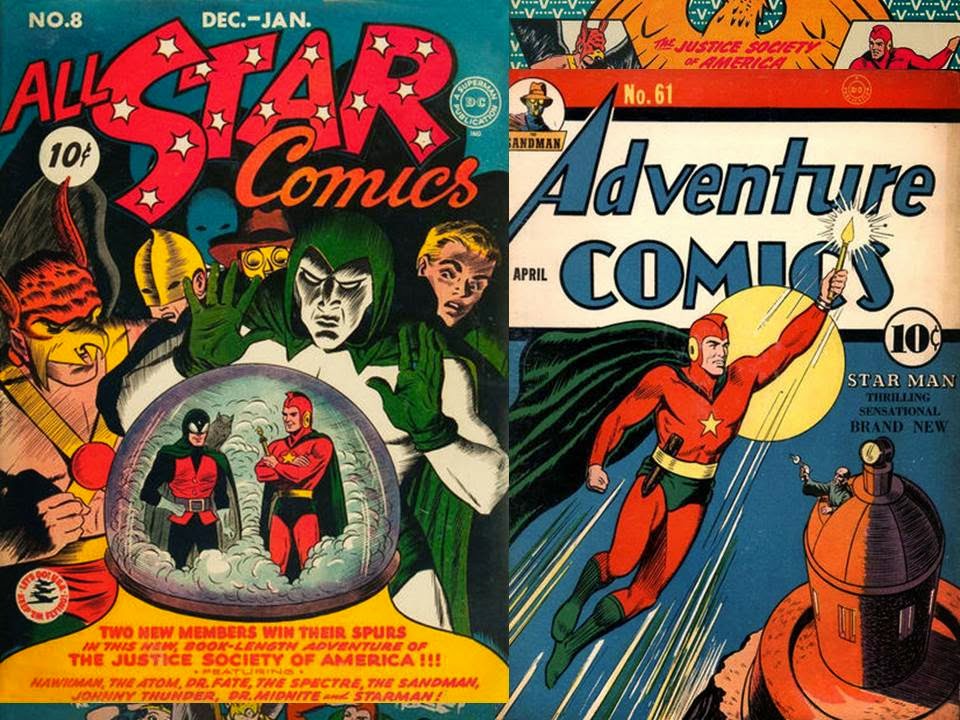 As much as Johnny counted on luck and magic, Starman worked with science.  Starting his adventures in Adventure Comics #61 (April, 1941, by Gardner Fox and Jack Burnley), Ted Knight used the Gravity Rod (which allowed Ted to fly and fire energy beams) to be a hero in the style of the original Green Lantern, and to fight menaces such as Dr. Doog, the Light, and the Mist while protecting his girlfriend, Doris Lee,  before joining the Justice Society with All-Star Comics #8 (December-January, 1941-1942). 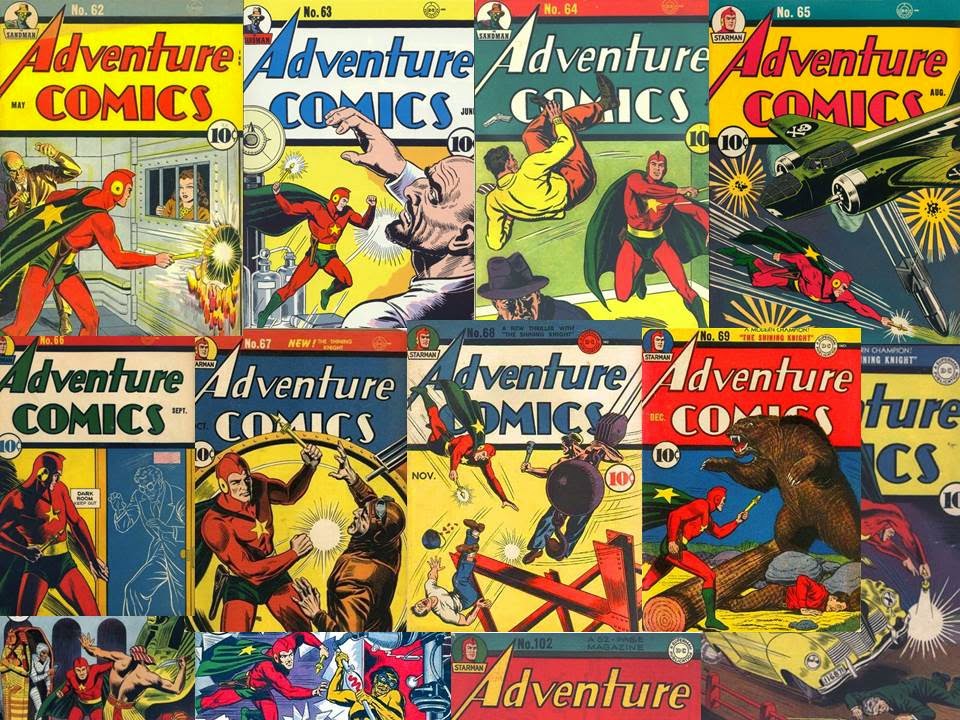 A playboy as well as a scientist, Ted kept improving the Gravity Rod (eventually calling it a Cosmic Rod, and adding more energy manipulation abilities to his weapon), and continued to fight on with the Justice Society and on his own, through All-Star Comics #23 (Winter, 1944) and Adventure Comics #102 (February-March, 1946, the issue after being when Superboy, Green Arrow and Aquaman moved to Adventure Comics), which was Ted's last Golden Age appearance. 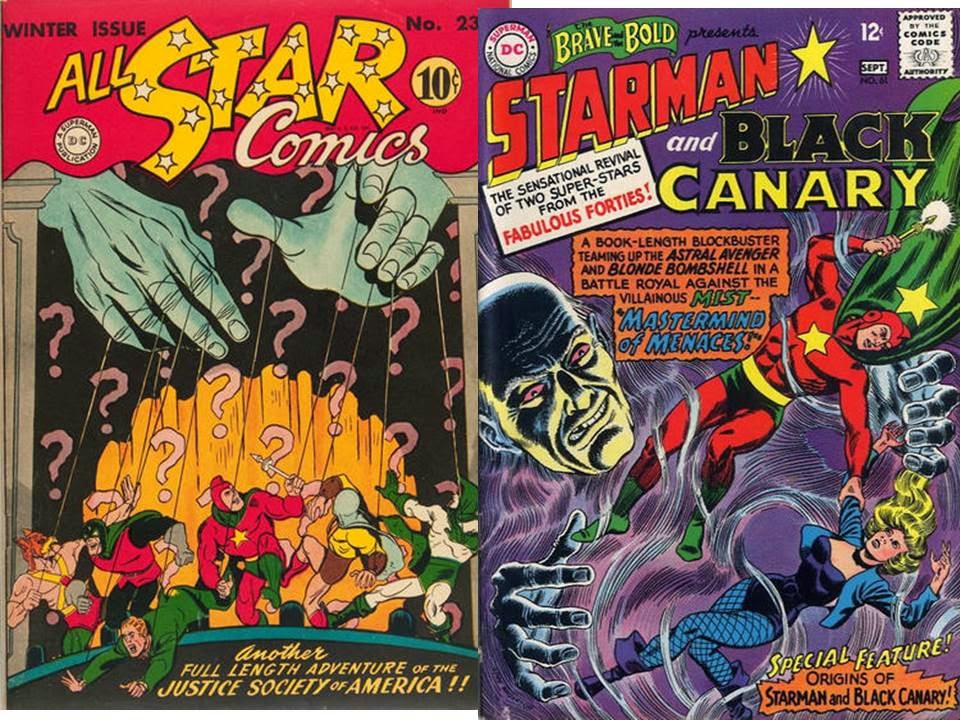 Ted Knight soldiered on, and returned with the JLA/JSA team-ups, having his first adventure with the team after their revival facing off against the Crime Syndicate of America in Justice League of America #29-30 (August-September, 1964).  Starman had also worked with the original Black Canary in two issues of Brave and the Bold (#61 and #62 in 1965, the first also reviving an old foe of Ted's, the Mist), and continued to work with the Justice Society on and off until just after the Crisis on Infinite Earths, which took most of the team away for a while... 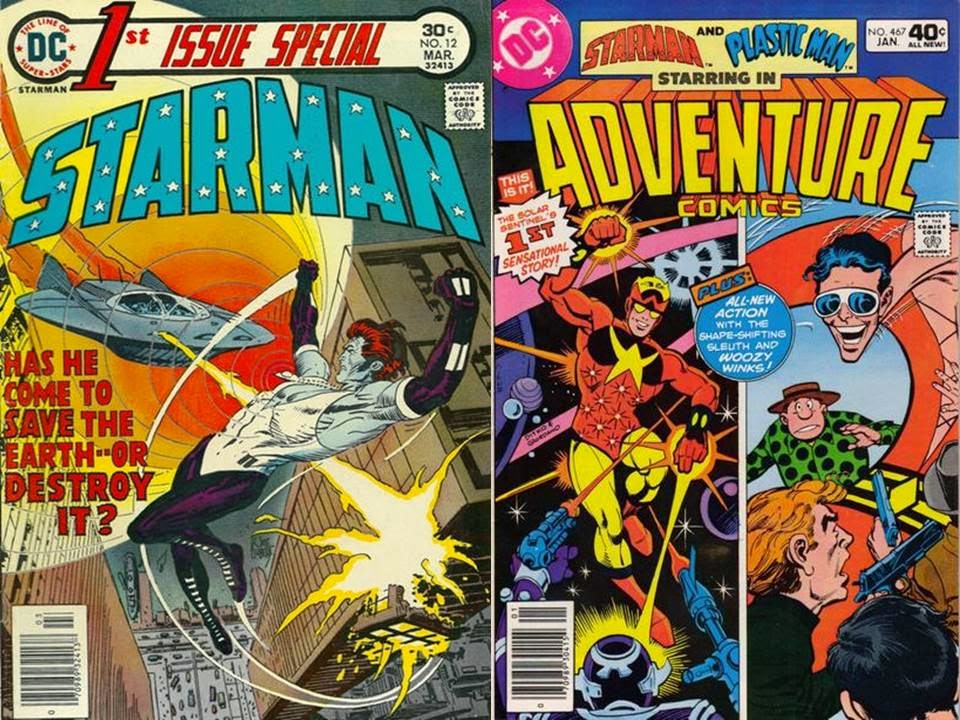 But, Starman also had quite the legacy...having passed on his Cosmic Rod to the Star-Spangled Kid for a time (who had used it to join the JSA later, and using the basis of its technology to help him turn himself into Skyman in Infinity, Inc.), had an alien take over the name once on Earth-1 (a fellow name of Mikaal Tomas, in First Issue Special #12 of March, 1976), as well as a second alien, name of Prince Gavin, take the name starting with Adventure Comics #467 (January, 1980).  Prince Gavin didn't fair well in the Crisis on Infinite Earths either.... 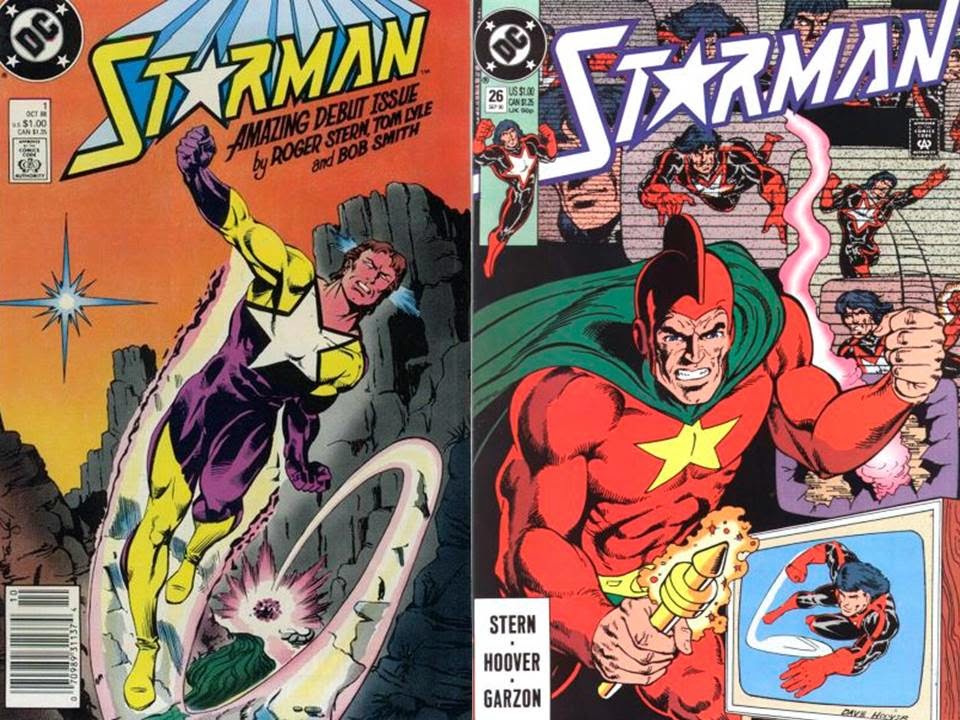 ..later, a new Starman arose, that being Will Payton, who took up the mantle after being kid by a beam from the stars, and gaining super-strength, speed, flight and the ability to alter his appearance (all starting in Starman #1 from October, 1988), and that Starman met the first of the original Starman's sons, David Knight, who reminded the newcomer of the Starman legacy. 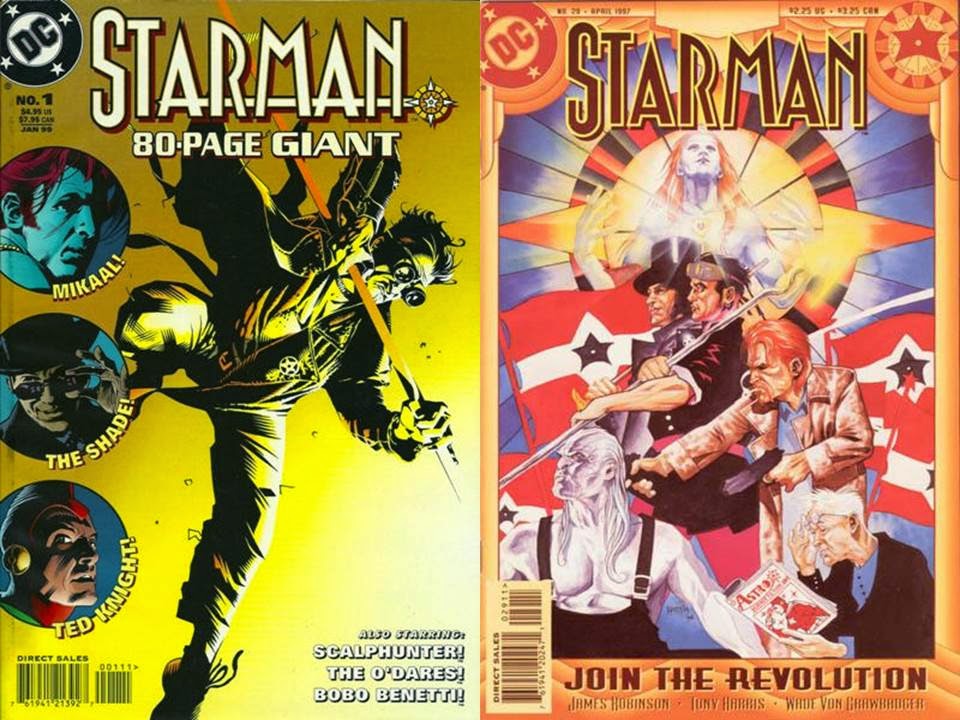 That Starman legacy was followed up on after Zero Hour: A Crisis In Time, and a new Starman, David's brother, Jack Knight, and his 83 issue series (that also contained 2 Annuals, an Eighty-Page Giant and a Secret Files, and even a special focusing on the Mist, no less), in which writer James Robinson wove together the history of all the Starmen, and a few other folks as well like Flash's foe of the Shade, Phantom Lady, Solomon Grundy, Batman foe Dr. Phosphorus, western hero Scalphunter and even Stargirl the legacy of Star-Spangled Kid, in Opal City (and truly a story for another day...and one that intimately involved the JSA as well as the JSA's next member...).


Doctor In The Dark 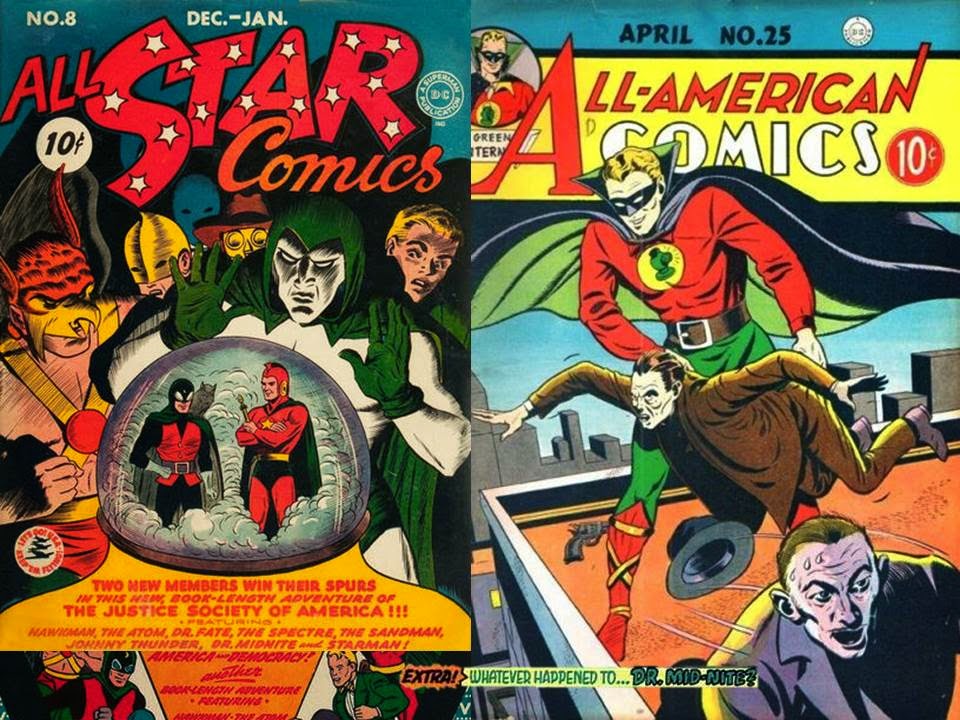 Dr. Mid-Nite...poor Dr. Charles Mcnider.  All the Doctor wanted to do is treat a witness against Killer Maroni (no relation known to Boss Maroni, who helped create Robin), in All-American Comics #25 (April, 1941 by Charles Reizenstein and Stan Aschmier), and yet, the Killer ended up blinding the Doctor...or so he thought, until the McNider's owl, Hooty, crashed through a window, and McNider realized he could see in the dark...and created a costume, blackout bombs (to blind his foes) and infrared goggles to allow him to see in the day, becoming Dr. Mid-Nite! 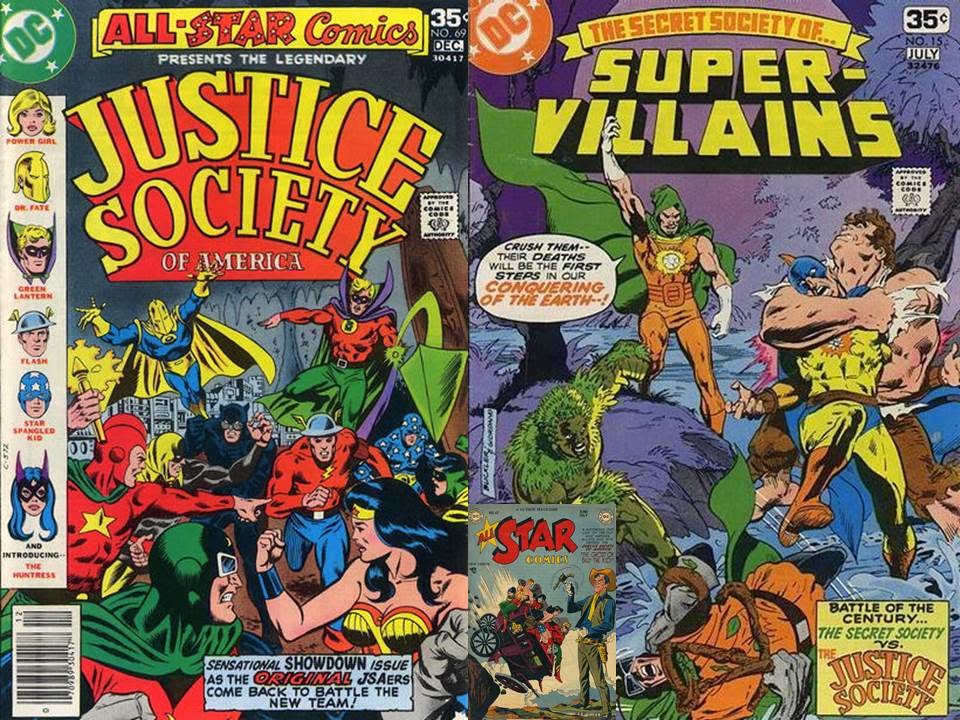 Dr. Mid-Nite joined the JSA with All-Star Comics #8 (December-January, 1941/1942), still having solo tales as well (but not getting any covers thanks to Green Lantern and the western Johnny Thunder) fighting crime and working with his assistant, Myra Mason, in All-American Comics until #102 in October, 1948 and stuck around with team until its Golden Age end in All-Star Comics #57 (February-March, 1951).  Dr. Mid-Nite also didn't get much solo appearances when he came back (starting with Flash #137), mostly hanging around with the JSA (though he was captured by the Secret Society of Super-Villains once, and rated one solo story in DC Comics Presents #29, but also didn't make that cover) until they disappeared soon after the Crisis On Infinite Earths with the Last Days of the Justice Society Special in 1986. 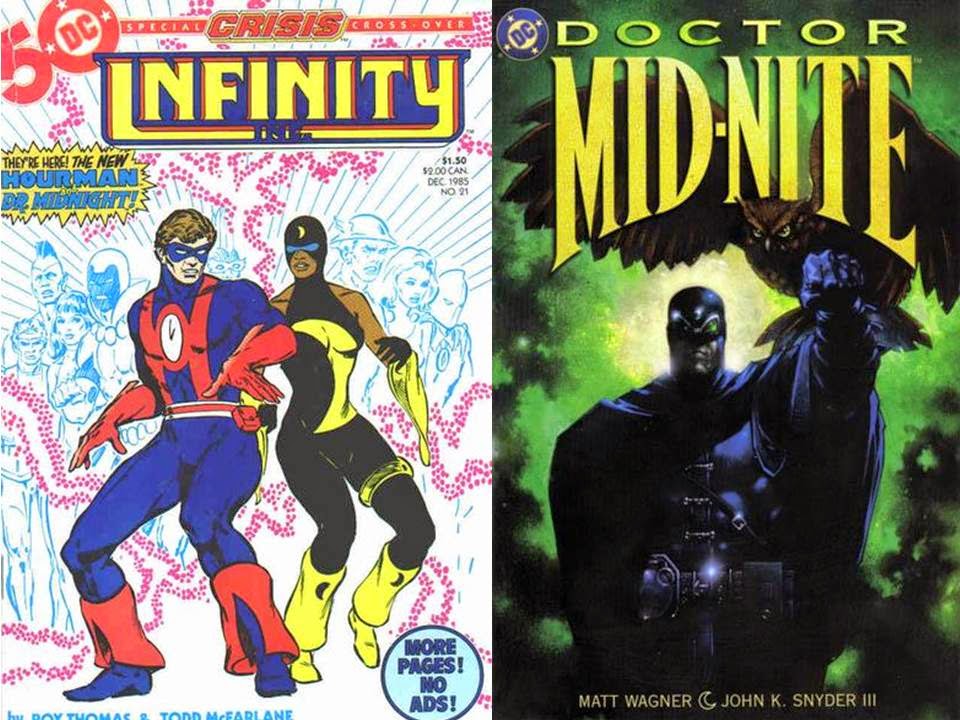 Infinity, Inc. gained a legacy member, with McNider's protege, Dr. Beth Chapel, who was blinded during the Crisis On Infinite Earths and took on a slightly more correct spelled super-hero identity inspired by Charles, becoming Dr. Midnight (created by Roy Thomas and Todd McFarlane).  The original Dr. Mid-Nite returned for a time, but was lost again during the Zero Hour: A Crisis In Time event that also aged the original Starman, and then later, a boy once rescued by McNider named Pieter Cross became a Doctor, and then the new Dr. Mid-Nite in a 3 issue mini-series from 1999 by Matt Wagner and John K. Snyder, keeping a Doctor in the JSA. 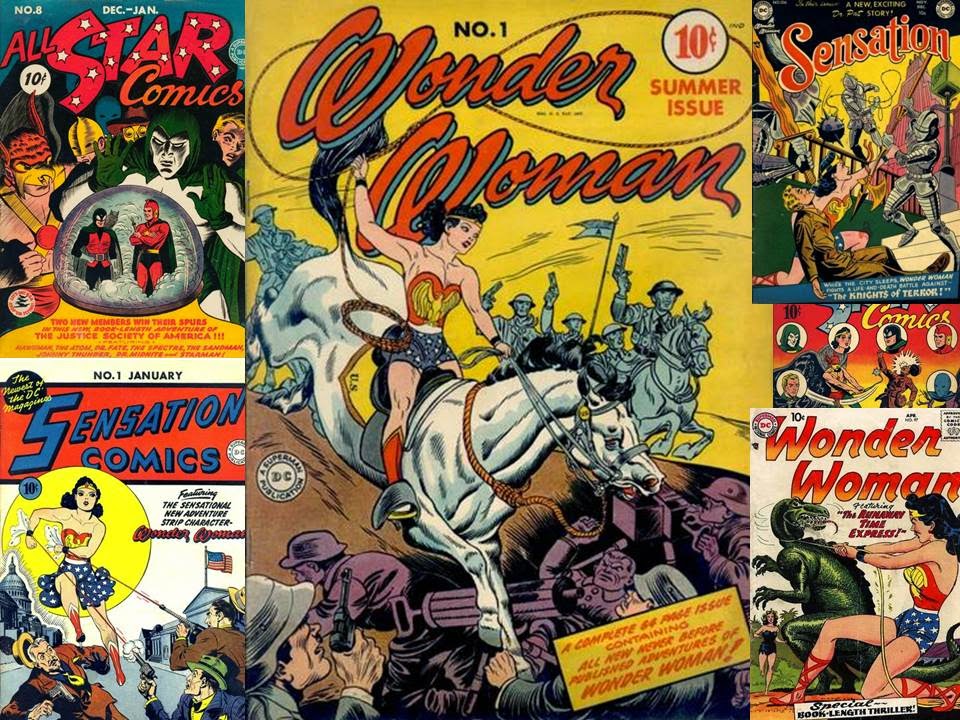 Wonder Woman premiered as a back-up story in All-Star Comics #8 (December-January, 1941/1942) by William Moulton Marston and Harry G. Peter, wherein Princess Diana of Paradise Island had been made from clay by the gods as a gift to Hippolyte and granted some of the powers of the Olympian Gods.  Diana was raised by the Amazons, growing up a strong, gifted woman.  One day, Diana and her friend, Mala, found Steve Trevor, a wounded U.S. Army officer, and Diana vowed to return him to Man's World (after winning a contest among the Amazons, wherein Diana masked herself to enter), was gifted her Invisible Plane, Golden Lasso and began to fight in World War II! 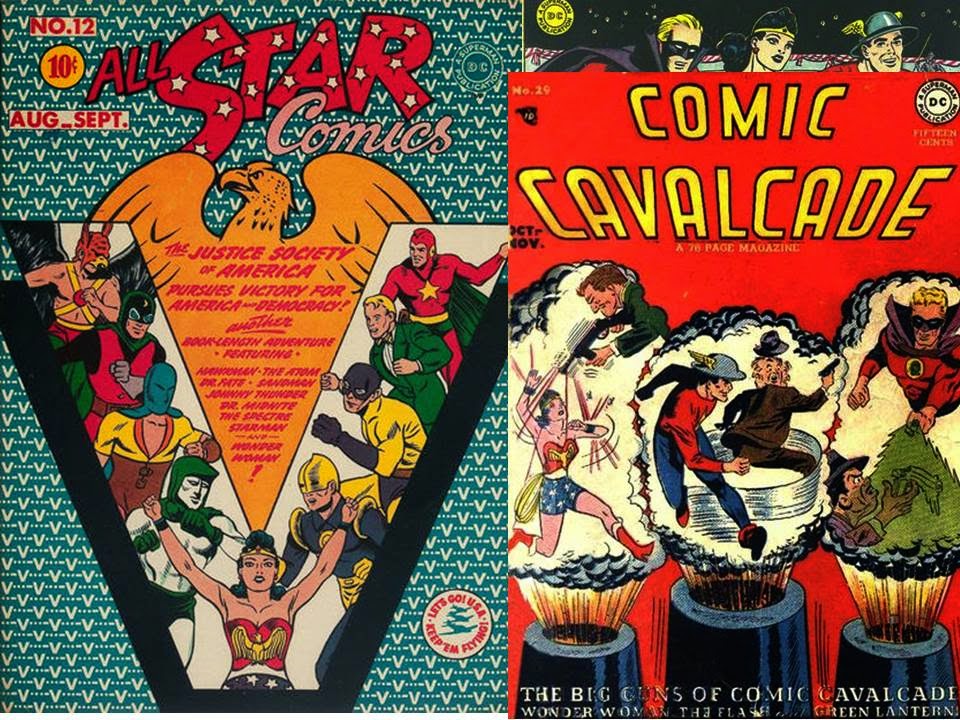 Wonder Woman was the star of Sensation Comics (starting with #1 in January, 1942), and graduated to her own Wonder Woman title its first issue in the Summer of 1942, and working with the JSA in All-Star Comics #11 (June-July, 1942), and joining in All-Star Comics #12 (August-September, 1942).  Now, Wonder Woman didn't have to become an honorary member of the JSA just because she was promoted to her own title...though for a time she only acted as the JSA's secretary!  Wonder Woman spent her time fighting various alien invasions, gods, and villains like Dr. Poison, Cheetah, Giganta, Dr. Psycho, Baroness Von Gunther, Queen Clea and more, and even branched out into Comic Cavalcade, starting with #1 in Winter, 1942 (which had 29 covers of her having adventures with Flash and Green Lantern, though, sadly, no such team-ups within the book...though they each had solo stories in Comic Cavalcade until Comic Cavalcade #29, October, 1948).  Wonder Woman also made it into the Big All-American Comic Book of 1944! 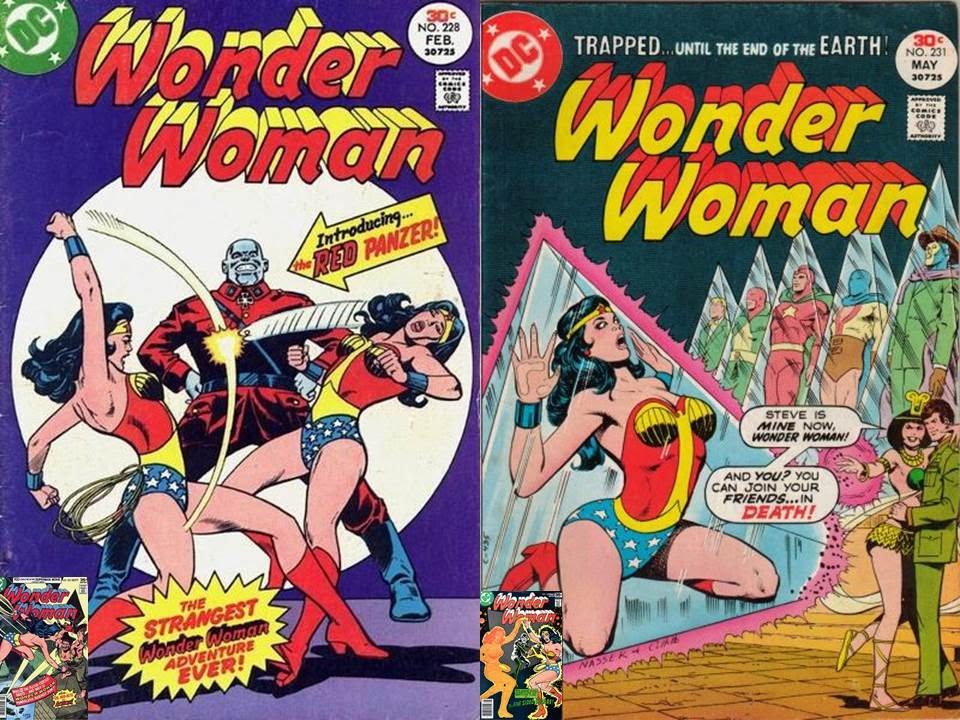 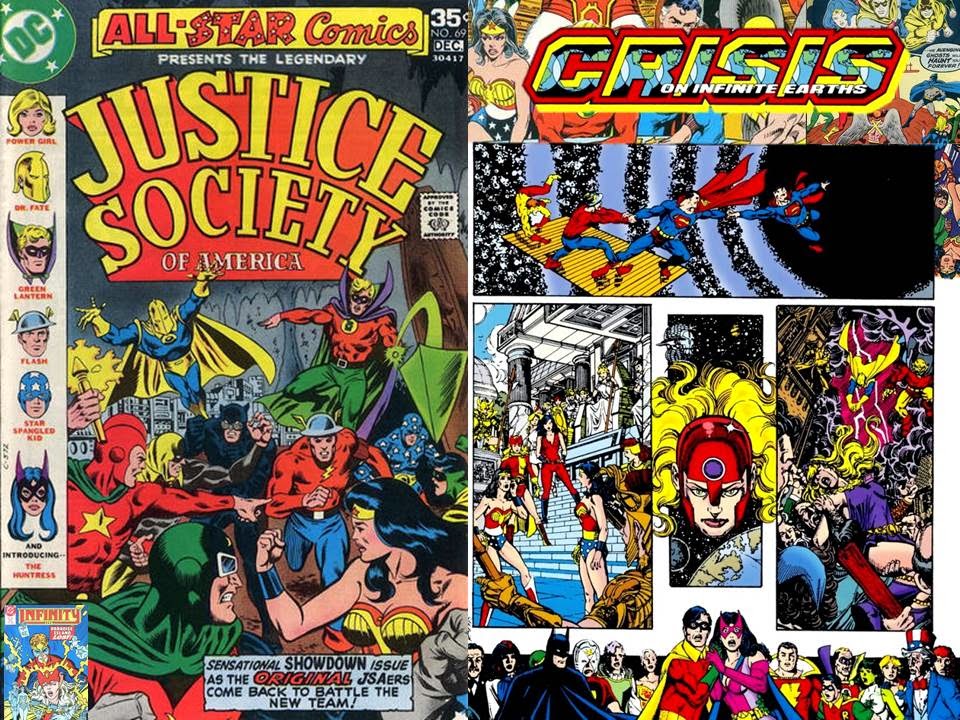 Wonder Woman had more of her World War II history filled in with All-Star Squadron (a group of World War II DC heroes formed with the members of the Justice Society of America, Seven Soldiers of Victory, the Freedom Fighters and more) in tales set in the 1940s (but presented in the 1980s) as well as being a frequent guest in Infinity, Inc....at least until the Crisis On Infinite Earths ended her career (though the Golden Age Wonder Woman popped up a little to help the current Wonder Woman during Infinite Crisis).  All this history shows why Wonder Woman needed a Wonder Woman Encyclopedia! 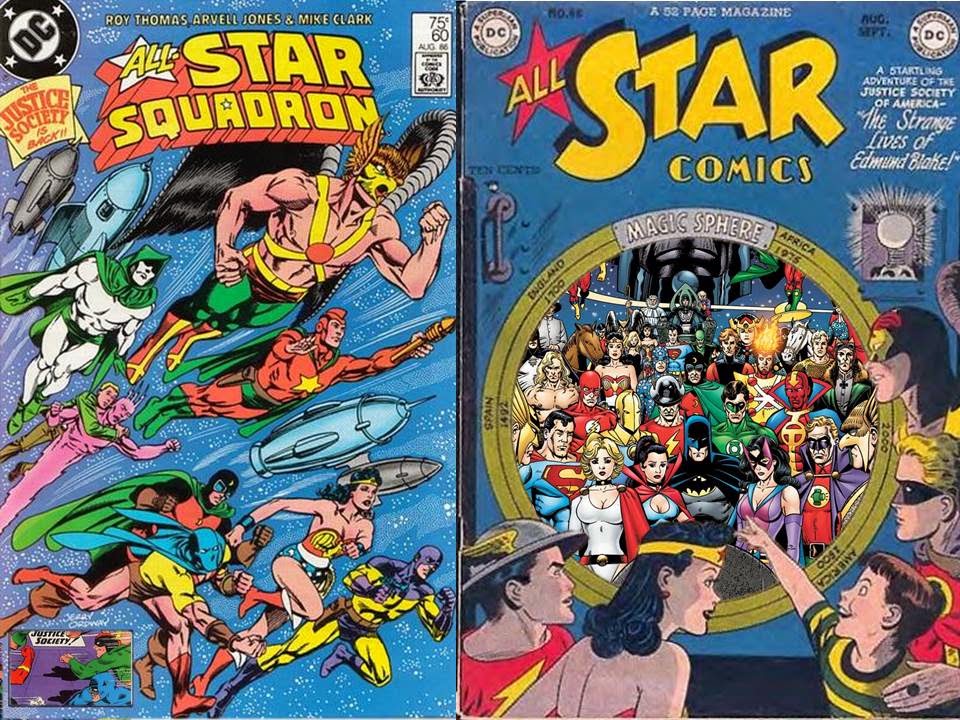 Wonder Woman also had a major affect on the JSA...as Sensation Comics provided the next two members, Mr. Terrific and Wildcat (and more on them to come!).