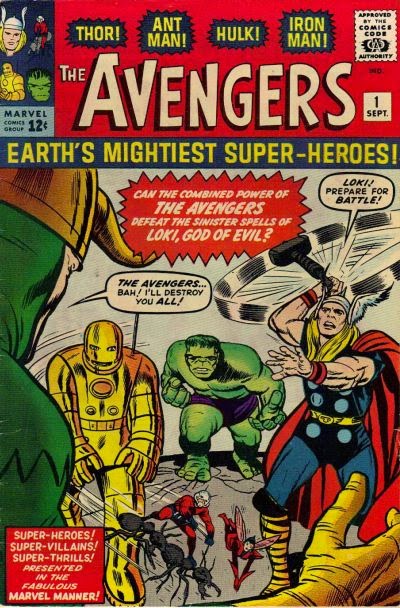 Yes, class is in session, and we’ll begin today by giving you a brief run down of the Avengers and its members!


The Avengers first assembled in Avengers #1 (September 1963) by Stan Lee and Jack Kirby, but the teammates didn’t start there…they had been living their lives for years before that, so, in this, the first of a few articles about the Avengers membership, let’s breakdown the charter members of the Avengers, which were Iron Man, the Hulk, Thor, Ant-Man and the Wasp, and how the team formed! 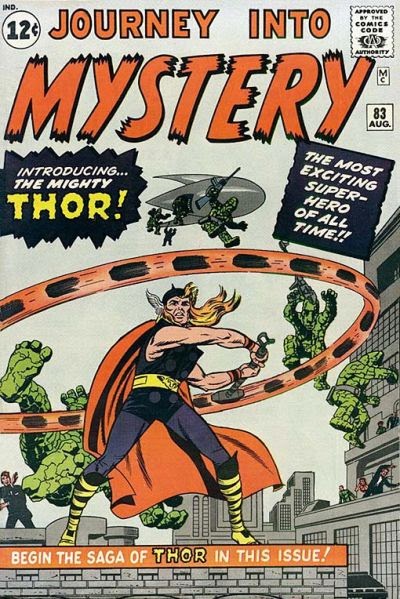 Thor, he’s the oldest of the team members, so we’ll start with him. The version of Thor most Marvel fans are familiar with began in Journey Into Mystery #83 (August 1962, by Stan Lee and Jack Kirby).

In the story, “Thor the Mighty and the Stone Men From Saturn”, Dr. Donald Blake, attempting to escape invading aliens, discovers a hidden cave with the mighty Mjolnir, which grants him the power of the Norse god, Thor. A little different from the movie, and the Doctor discovers later that he really is the son of Odin, and this was all part of a test to teach the young god humility. 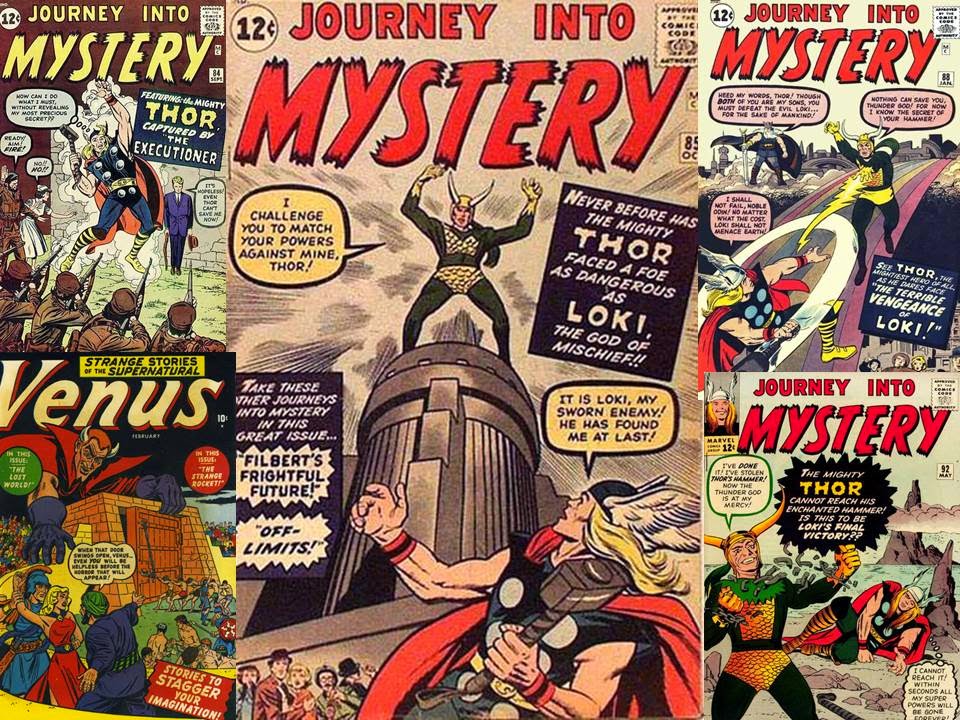 Still hasn’t gotten there, but ’tis true that he could!  Before Avengers #1, Thor faced the Kronans (the official name for the Stone Men from Saturn, in JIM #83), the Executioner from San Diablo (JIM #84), with Thor’s own brother Loki (a sorcerer from Asgard, and more on his mischief later, but he started to menace this version of Thor in JIM #85, but Thor and Loki had appeared before in the pre-Marvel Leading Comic Corporation, in Venus #12, February 1951, and would be a constant thorn in Thor’s side, as well as the Avengers…). Loki was a constant menace to Thor, and would also often use others to do his biding. Always amazing that their father, the all-father Odin, would come down so hard on Thor for minor problems, yet Loki get away with near murder… 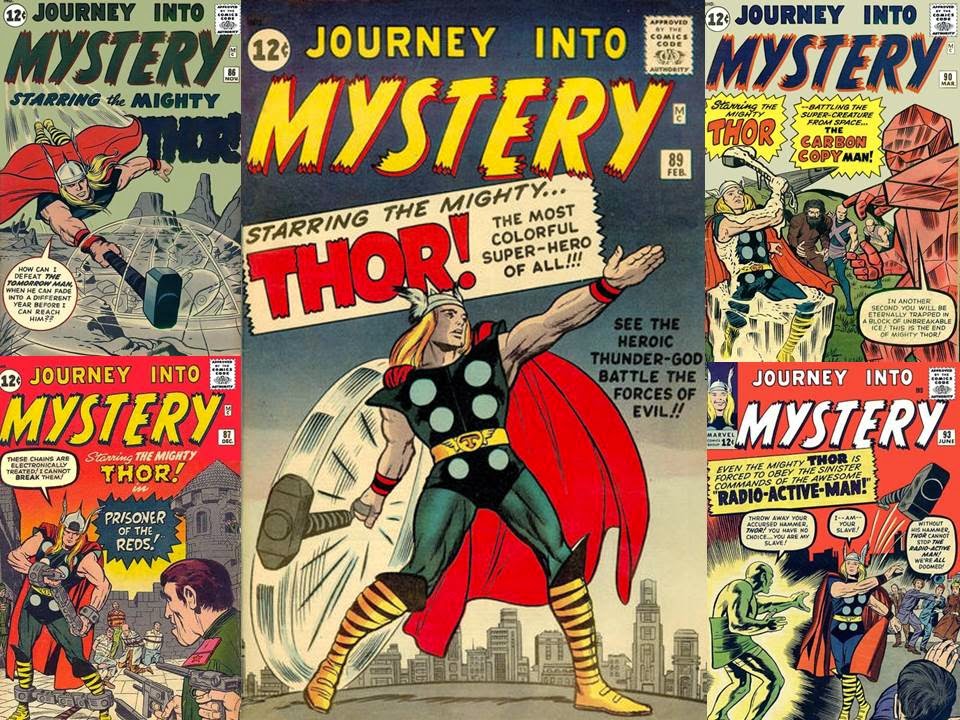 Other pre-Avengers #1 foes include the time-traveller Zarrko the Tomorrow Man (JIM #86), Thug Thatcher (JIM #89), Carbon-Copy Man (shape-changing alien Zano, JIM #90), Sandu (a carnival magician Loki gave powers to in JIM #91), the Radioactive Man (Chen Lu, a Chinese scientist irradiated to fight Thor in JIM #93 who would also come back to menace the entire Avengers team time and time again), Professor Zaxton (a man with a duplicating machine, JIM #95), and Merlin the Mad (really the Maha Yogi, not the ancient wizard who helped Arthur find Excalibur, the real Merlin was busy elsewhere…) who started to appear in Marvel Comics with JIM #96, the last issue before Thor helped to found the Avengers! 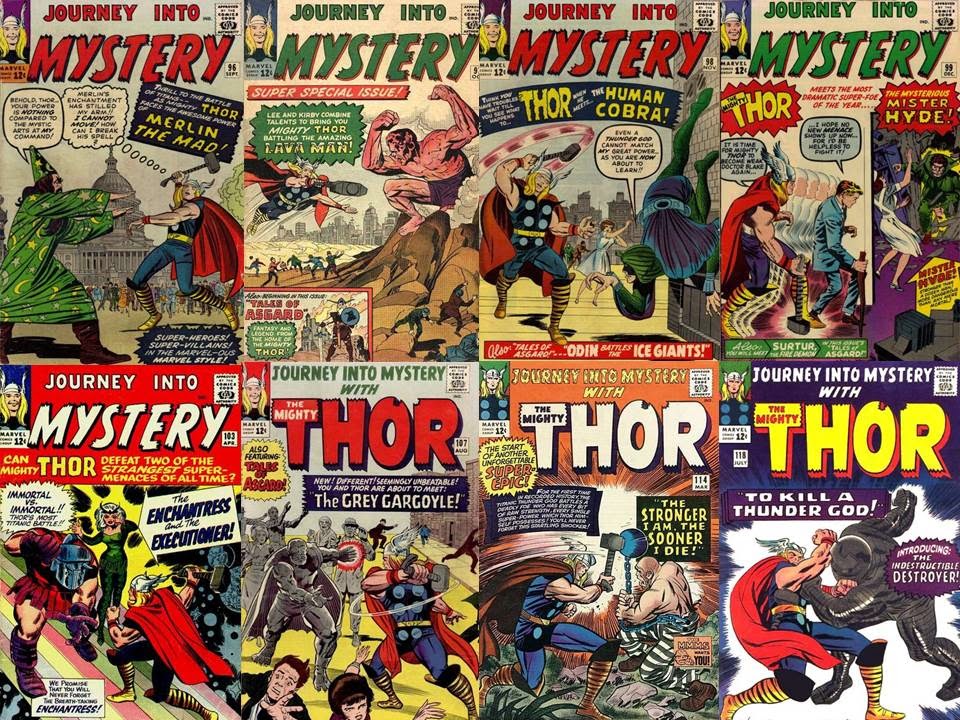 Ant-Man and the Wasp! 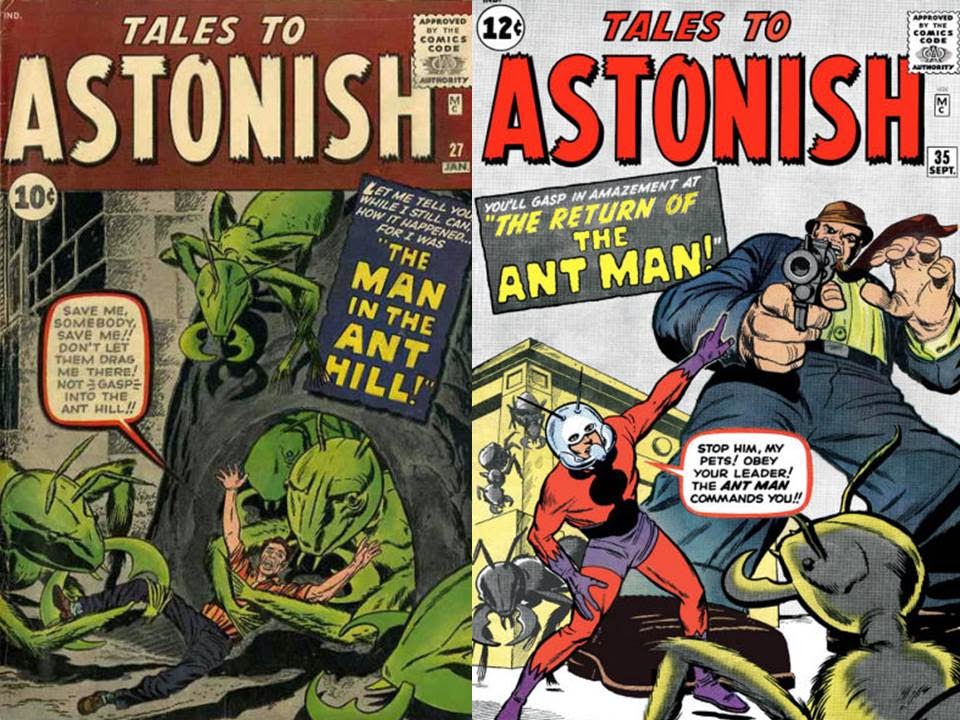 Ant-Man, well, he’s a little bit of a lengthy tale, as his alter ego of Dr. Henry Pym first appeared in Tales To Astonish #27 (January 1962, by Stan Lee and Jack Kirby) as “The Man in the Ant Hill!”. This was good enough for Hank to return as the Ant-Man in the aptly titled “The Return of the Ant-Man” in Tales To Astonish #35 (September 1962, also by Stan Lee and Jack Kirby), and this time, biochemist Hank had a costume, was in control of his shrinking powers (given to him by a gas that contained “Pym particles”, and had a cybernetic helmet that allowed him to speak to the ants (and, he had the strength of a full-sized human at ant-sized…which, everyone should remember from an infamous sketch from the early days of Saturday Night Live!). 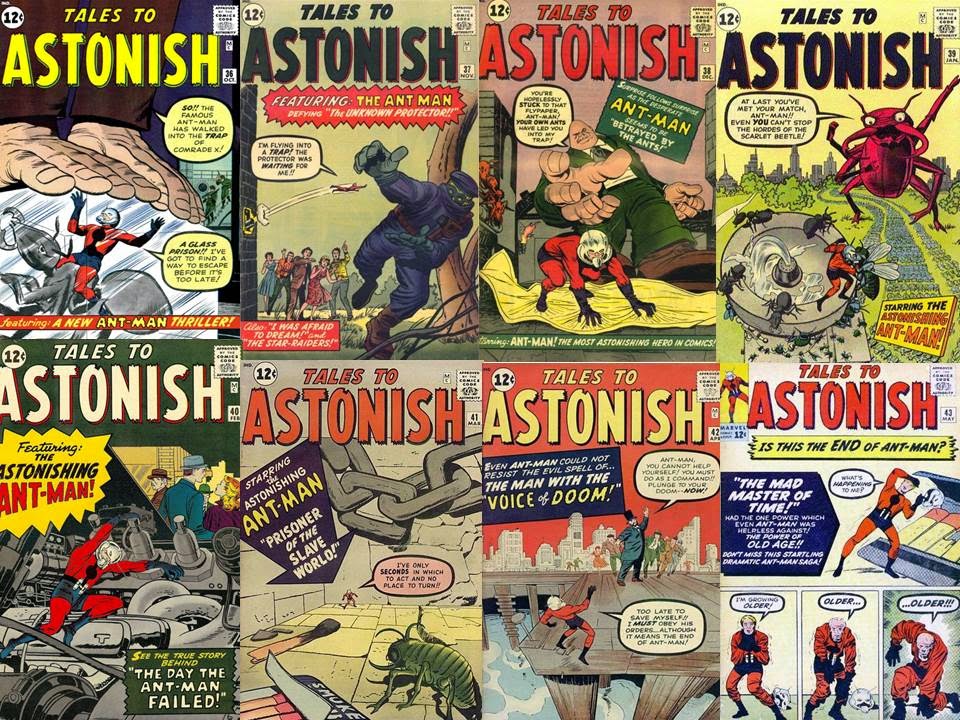 But, mostly Hank was stuck fighting communists, though a few had names like Comrade X (Nina Vladimirovna Tsiolkovsky, TTA #36, who came back as Madame X), the Protector (Gerald Marsh, TTA #37), Egghead (Elihas Starr, a scientific rival who became Hank’s most tenacious foe starting with TTA #38), the Scarlet Beetle (an irradiated, intelligent beetle, TTA #39), the Hijacker (Howard Mitchell, TTA #40), Kulla (an extra-dimensional alien tyrant, TTA #41), the Voice (Jason Cragg, who had a hypnotic voice of doom, TTA #42), and the Time-Master (Elias Weems, TTA #43, who could age people). Still, Hank had not even picked up a support cast at this point, other than his ants. But, that was due to change soon when scientist Vernon Van Dyne came looking for help…. 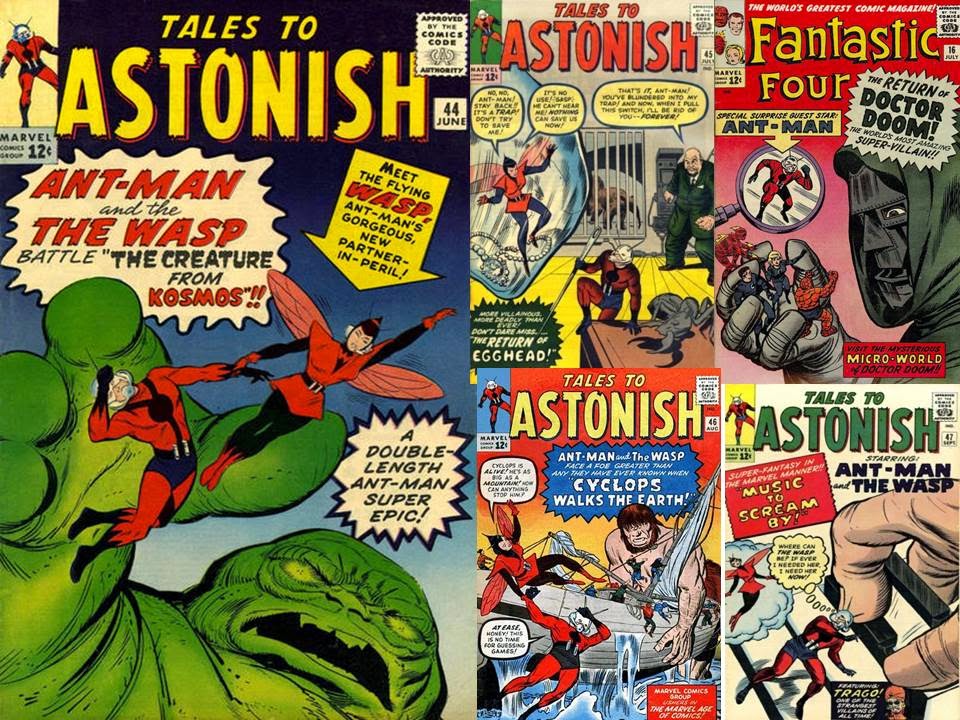 Dr. Van Dyne needed the help, as he was being stalked by Pilai, an creature from Kosmos (who was a criminal that the scientist contacted while attempting to contact other dimensions, and Dr. Van Dyne was unable to get the help he needed from Dr. Pym). The alien criminal came to Earth and killed the elder scientist, leaving his debutante daughter, Janet Van Dyne, looking to Hank Pym for help. He did, exposing her to the “Pym particles”, as well as giving her insect wings which would manifest as she shrank which would allow her to fly, and devices that would to have a bio-electric sting. Ant-Man and the Wasp defeated the alien, and became partners in Tales To Astonish #44 (June 1963, by Stan Lee and Jack Kirby). The pair faced Hank’s foe Egghead in TTA #45, meeting the Fantastic Four in Fantastic Four #16, and a robotic alien scout called the Cyclops in TTA #46, (all the while slowly falling in love) before founding the Avengers. 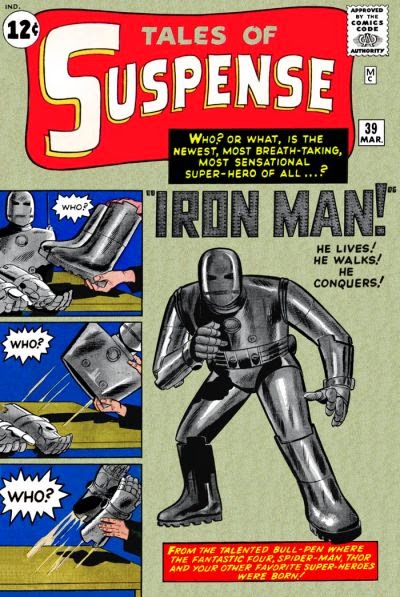 “Iron Man Is Born” was the title of Tales of Suspense #39 (March 1963, by Stan Lee and Don Heck), where scientist and industrialist Tony Stark was captured by guerrilla leader Wong-Chu. Tony must build the armor to save his own life from shrapnel lodged near his heart, and to escape his captivity and become the hero known as Iron Man (and return safely to his home...).


There's more to the story than what's presented here, but this does have the basics, and additions to the origins will be added as need; nothing is ever as simple as it appears in the world of Iron Man! 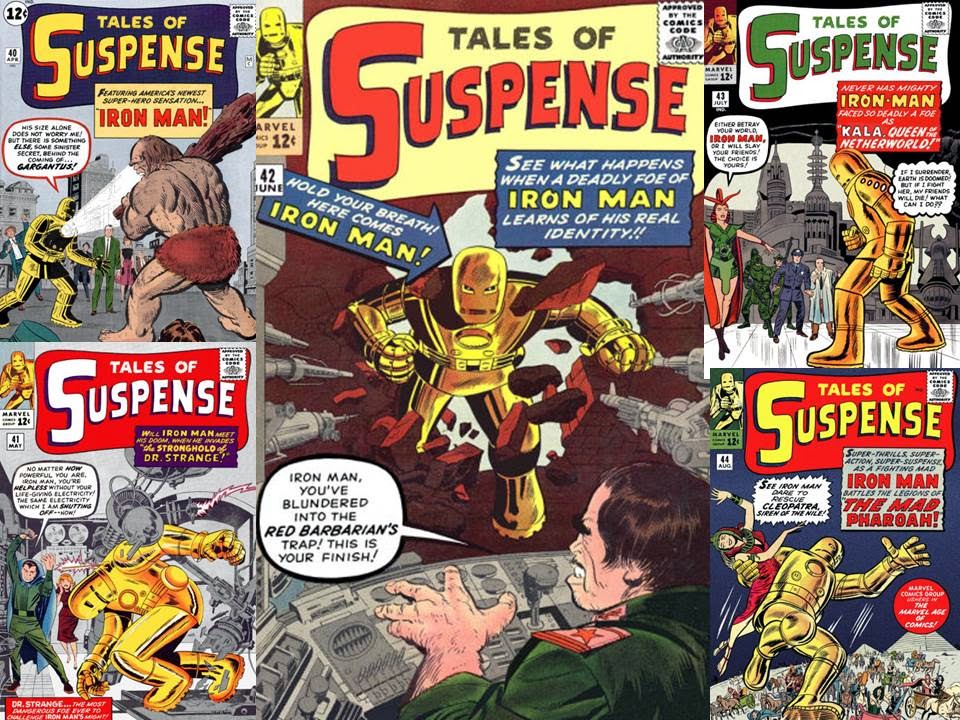 Iron Man faces a wide variety of foes on his return to the United States (and a change to golden armor, being the first of many upgrades to the Iron Man armor), starting with Gargantus in TOS #40, scientist Dr. Carlo Strange in TOS #41, communist Red Barbarian in TOS #42, Kala the Queen of the Underworld in TOS #43, and Hatap the mad Pharaoh in TOS #44 in his last appearance before the armored Stark becomes an Avenger. 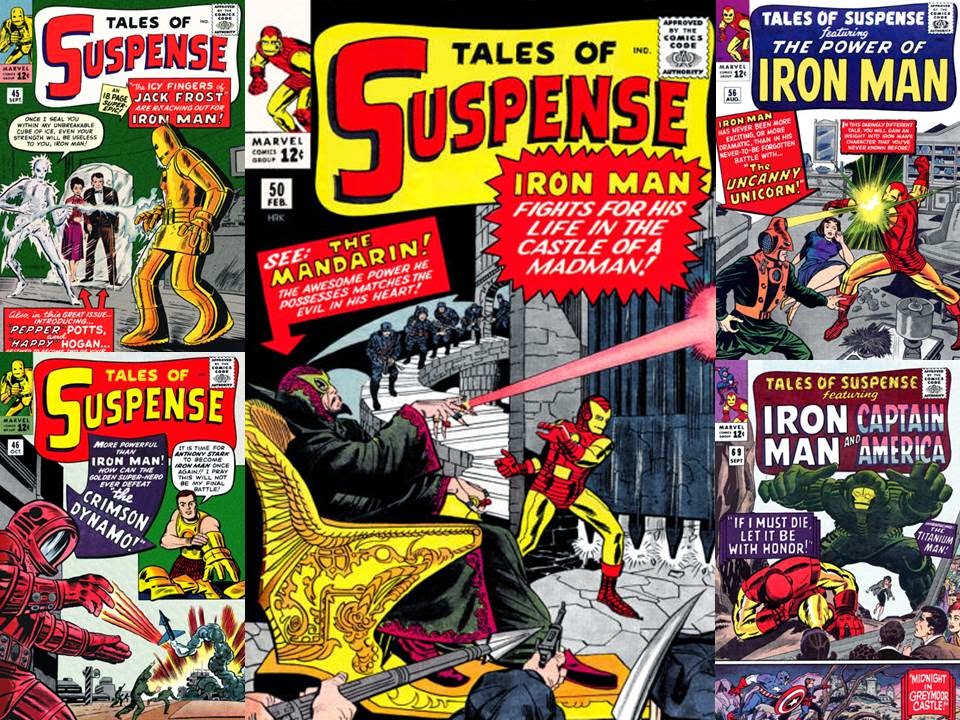 Later Iron Man foes that come to menace the Avengers (singly or together) include Jack Frost (at least in TOS #45, later to be called the Blizzard), the Crimson Dynamo (a set of armors worn by a different range of foes starting with TOS #46), the Mandarin (a foe with powerful alien rings, who would become the greatest menace to the Iron Man, starting with TOS #50), the uni-beamed Unicorn (TOS #56), and even more powerful armored foe, Titanium Man (TOS #69). Iron Man also faced more foes who became Avengers…but, we’ll talk about them later on. 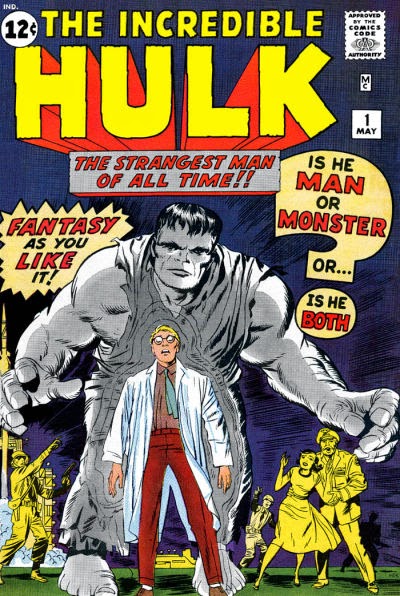 We’ll end with the Hulk, who premiered in The Incredible Hulk #1 (May 1962, by Stan Lee and Jack Kirby, boy, these guys created all the good stuff, didn’t they?). Doc Bruce Banner was bolted by gamma rays while trying to save young Rick Jones….and unleashed his rage by turning into the Hulk.

The Hulk started as a grey monster, but then took on a familiar green hue, and was incredibly strong and resistant to harm. 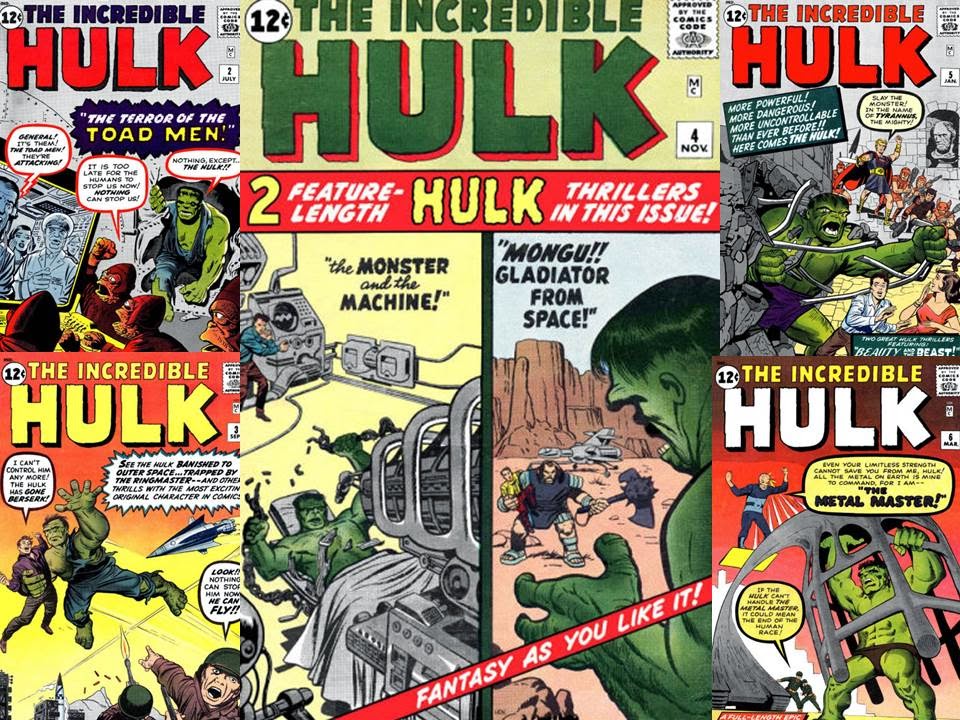 During his short six issue run, Hulk faced the Gargoyle (a Russian scientist) in #1, the Toad Men in #2, the Ringmaster and his Circus of Crime in #3, Mongu (a supposed alien menace) in #4, underworld overlord Tyrannus and would-be conqueror General Fang in #5, and the alien Metal Master in #6 (as well as General Thunderbolt Ross in every issue)…and his own temper, which got the super-strong hero into trouble with his pal. 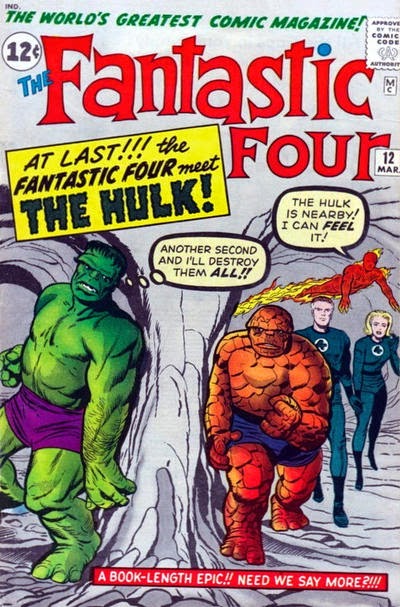 Rick Jones sent out a distress call to the Fantastic Four (with Mr. Fantastic, Invisible Girl and the Thing who would be future Avengers who made their first appearance in the title in #1, but not to join until later, and the Human Torch, who is the only charter FFer to not be an Avenger!), which Loki rerouted to lure Thor into battle with the Hulk.

Iron Man, Ant-Man and the Wasp also got the call, gathered to fight the green behemoth, and learned he was not at fault. Thor went to catch Loki, who was only finally defeated with teamwork, and captured thanks to the Ant-Man. The group gathered, and Wasp provided their name….the Avengers. And, thus…it was history! 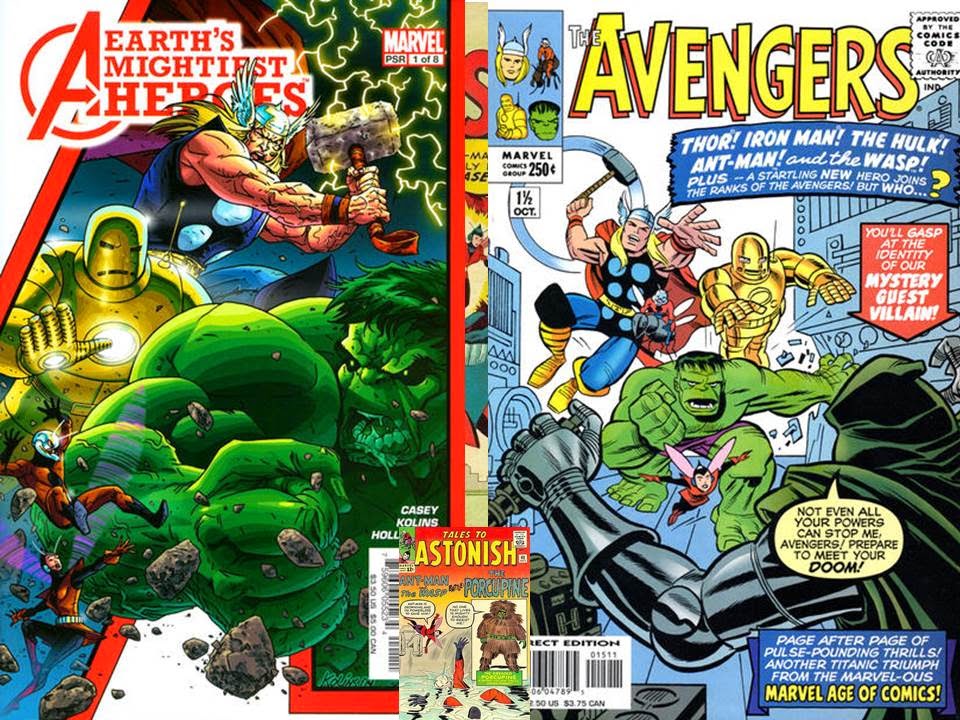 Oddly enough, a few modern creators have come back to insert some stories into Avengers history…such as back ups in the 12 issue Avengers Classic, an eight issue mini-series called Avengers: The Earth’s Mightiest Heroes, and a delightful little tale of Avengers #1.5 (or basically, one and one-half)! Great little stories, that are at least worth a quick mention here…as they filled in a few logical gaps along the way…it was also between Avengers #1 and 2, that Ant-Man and Wasp first faced the Porcupine (Tales To Astonish #48), and that led to a change in Avengers’ membership, that really started in Tales To Astonish #49…. 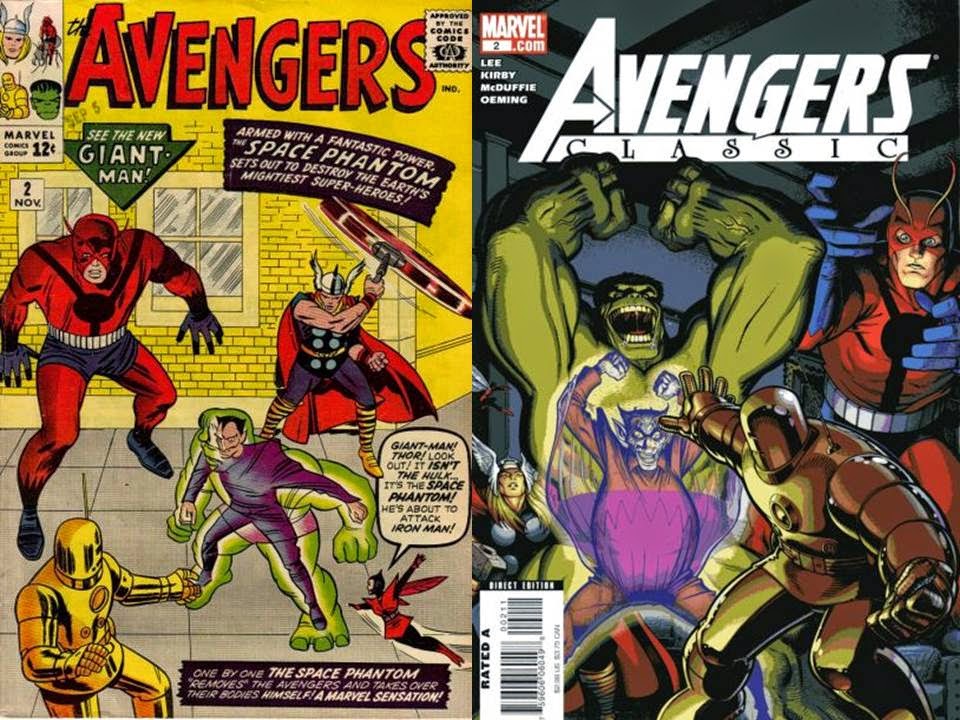 The Avengers next new member was really just an old member renamed, as Ant-Man made his first appearance as Giant-Man in Avengers #2 (November 1963, by Lee/Kirby) against the Space Phantom (who, was a phantom from space…well, there’s more to his story, as he also travelled in time and banished Avengers to limbo, but it involves future Avengers villains, so we’ll talk about that later…). 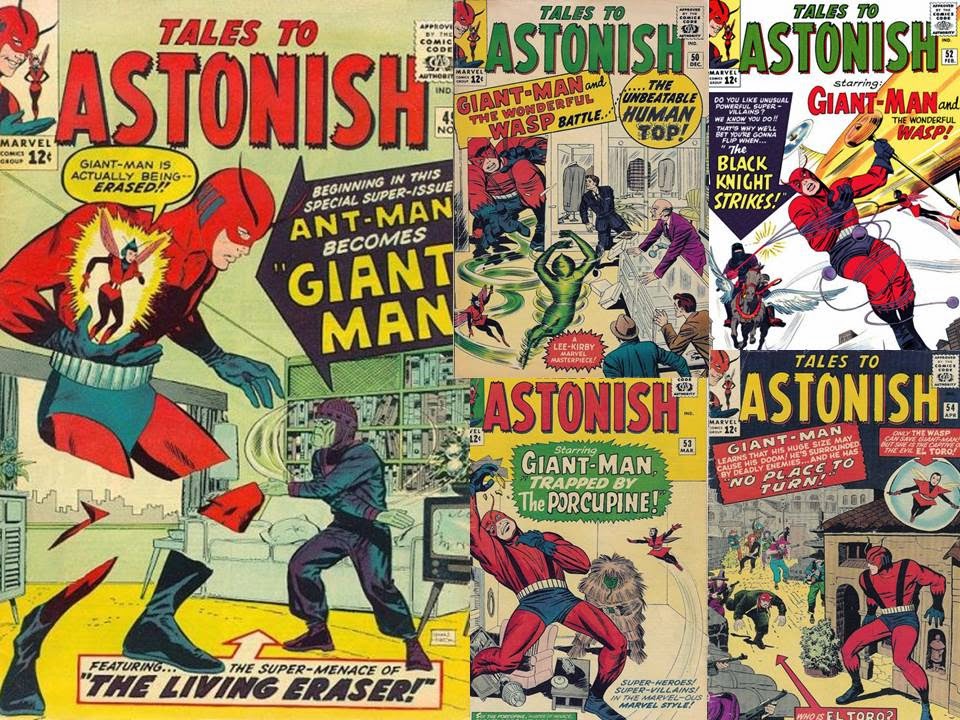 As Giant-Man, Hank faced even more villains, starting with his first appearance as Giant-Man in Tales To Astonish #49 (November 1963, by Lee/Kirby), and that foe was the Living Eraser. 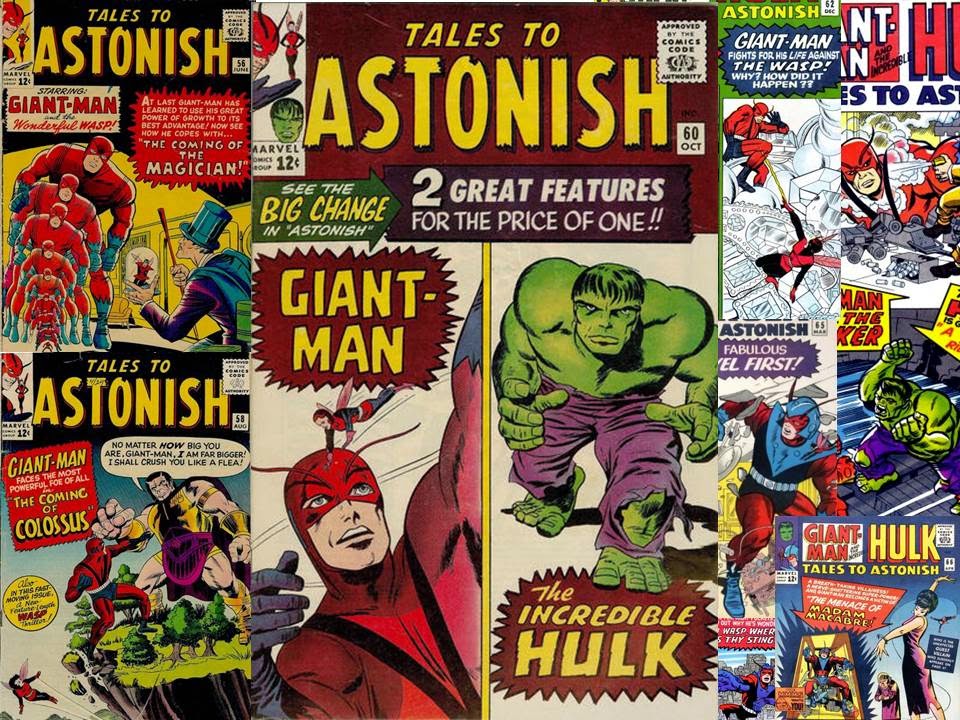 Wasp and Giant-Man began to really become a couple after facing the Magician (TTA #56, who also later faced the Wasp alone), the Colossus (a robot not related to the X-Man, TTA #58), the Beasts of Berlin (communist gorillas…in TTA #60), Second-Story Sammy (who steals the Giant-Man costume and faces the Wasp in TTA #62), the Wrecker (not the one who faces Thor, this one is only in TTA #63), Madam Macabre (who has ties to the Mandarin, in TTA #66) and the Hidden Man (TTA #67), before losing his slot with Tales To Astonish #69, because starting in #70, Namor took the spot! But most of this happened after Avengers #3, so let’s mention that and follow up on Hank Pym later… 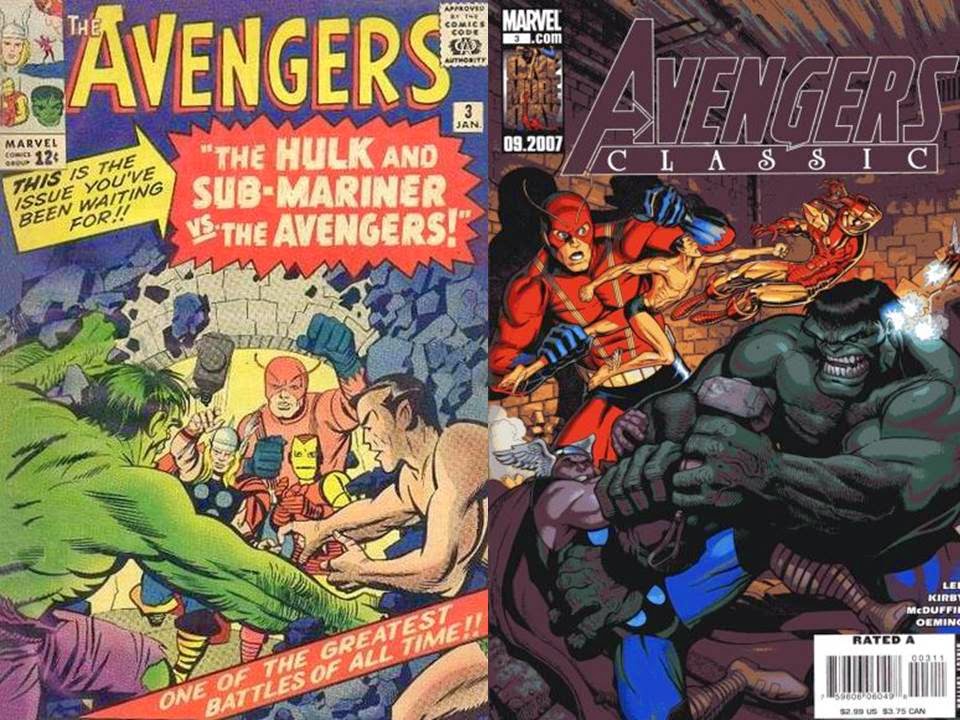 Avengers #3 (January 1964, by Lee/Kirby) has Iron Man’s first red and gold armor as the team battles former member the Hulk and future Avenger Namor the Sub-Mariner! During the course of this issue, Iron Man contacts a few other members of the Marvel Universe, including the Fantastic Four, the X-Men (including future Avenger, the Beast), and future Avenger, Spider-Man…so, the idea of a membership drive has really started. Seems the team is down a member, and, oddly enough, it was Namor that helped them find that member, who was an old teammate of his from earlier days…and we’ll discuss this later, so make sure to come back!
Posted by Dave's Not Here Comic Blog at 6:30 AM