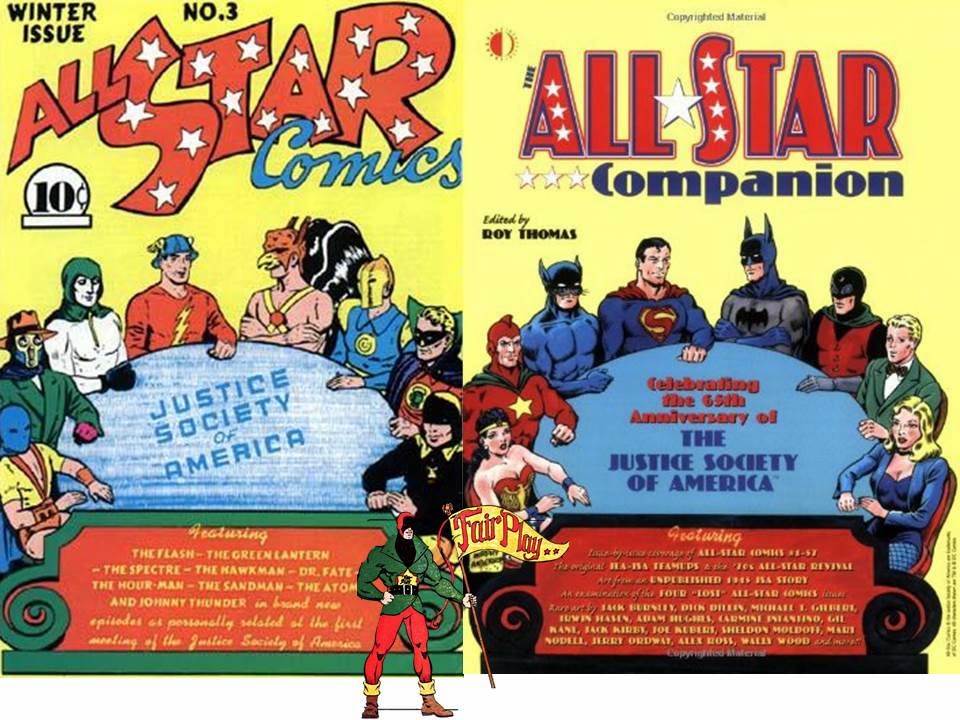 You'd think after adding four members (including Johnny Thunder, Dr. Mid-Nite, Starman and Wonder Woman), the Justice Society would be full...but, even more members came to sit at the table (like they did for the first meeting of the JSA in All-Star Comics #3, or for the Murphy Anderson cover of the All-Star Companion #1, one of four volumes on the JSA and all of the original Earth-2 by Roy Thomas...collect them all!). 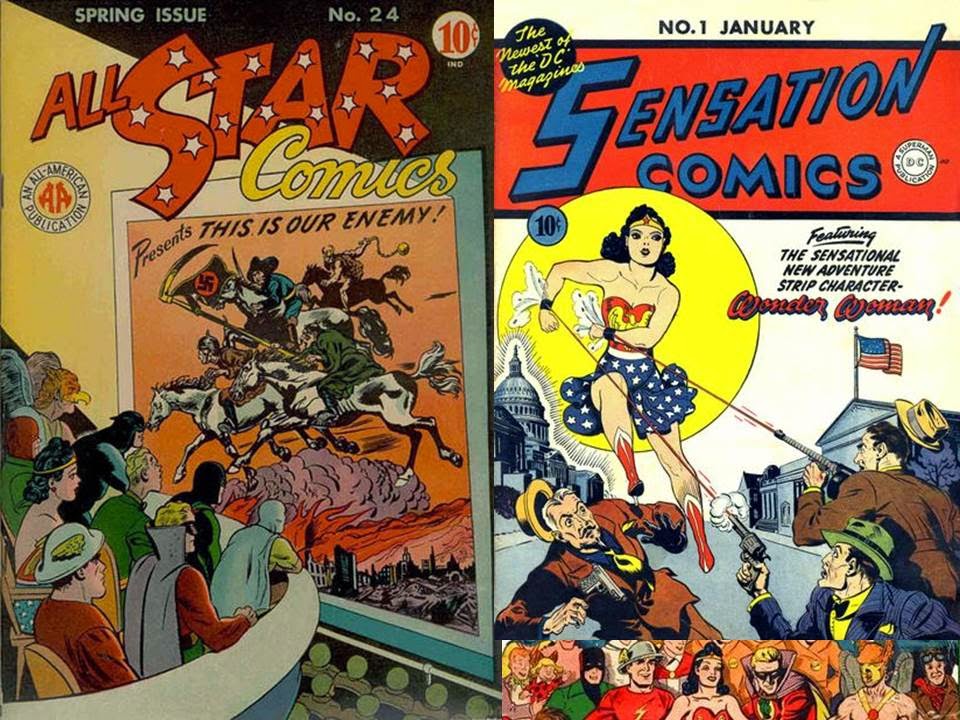 Mr. Terrific seems like a good place to start....as he only appeared with the JSA once in the Golden Age, in All-Star Comics #24 (Spring, 1945), and that (along with the Big All-American Comic Book of December, 1944), are the only two covers he made it onto in the Golden Age.  Premiering in Sensation Comics #1 (January, 1942  by Charles Reizenstein and Hal Sharp), Terry Sloane was a genius, and college graduate by the age of 12...and an incredible socialite and athlete, so much a success that he was considering suicide at a bridge, until he met Wanda Wilson, also planning to kill herself as her brother was on his way to becoming a gangster.  Designing a costume and deciding to fight for "Fair Play", Terry became Mr. Terrific to show the boy Billie a new way, beating the leader of the gang, Big Shot, and finding a new purpose for his own life! 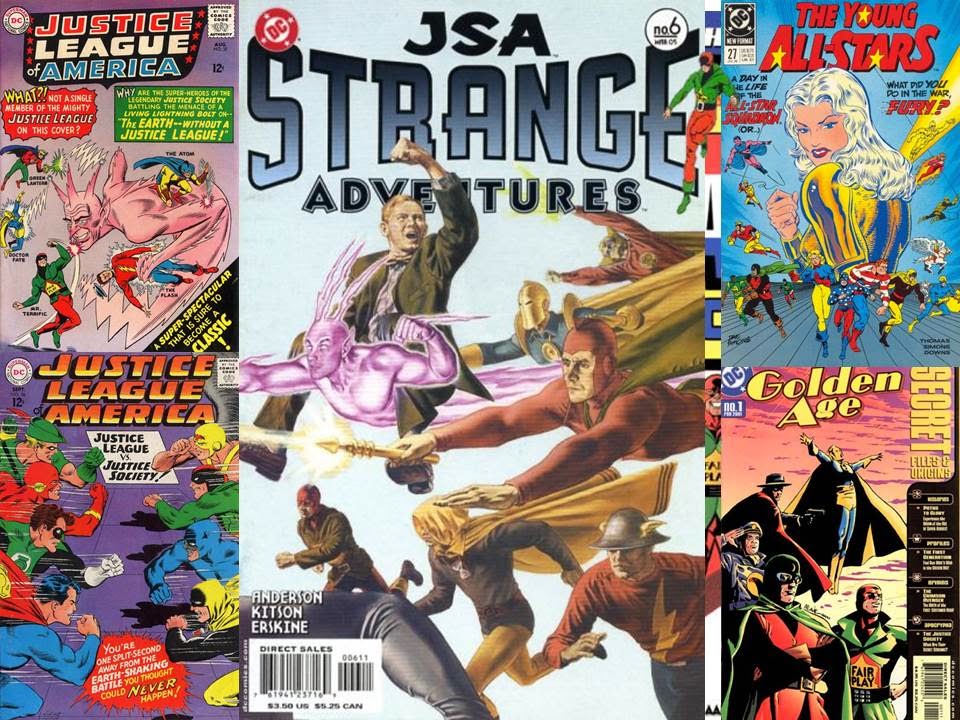 Mr. Terrific fought criminals for 63 issues of Sensation Comics #63 (March, 1947) before retiring for a time...and coming back to the JSA with Justice League of America #37 (August, 1965).  Terry made a few appearances with JLA/JSA tales over the years until his untimely passing (in one of those tales, no less!).   Still, that wasn't enough to totally take out Mr. Terrific, as he appeared with the JSA in two World War II set issues of Wonder Woman in 1977 (#231 and #232)... 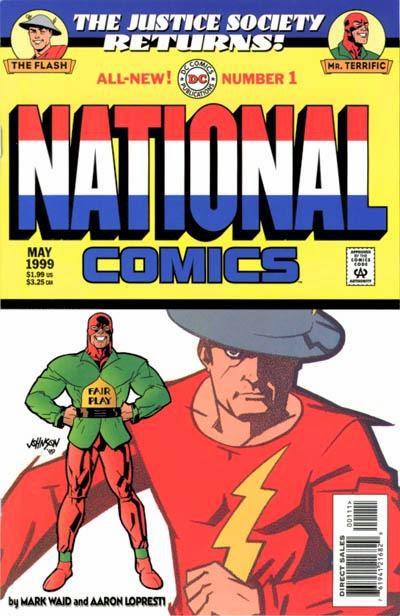 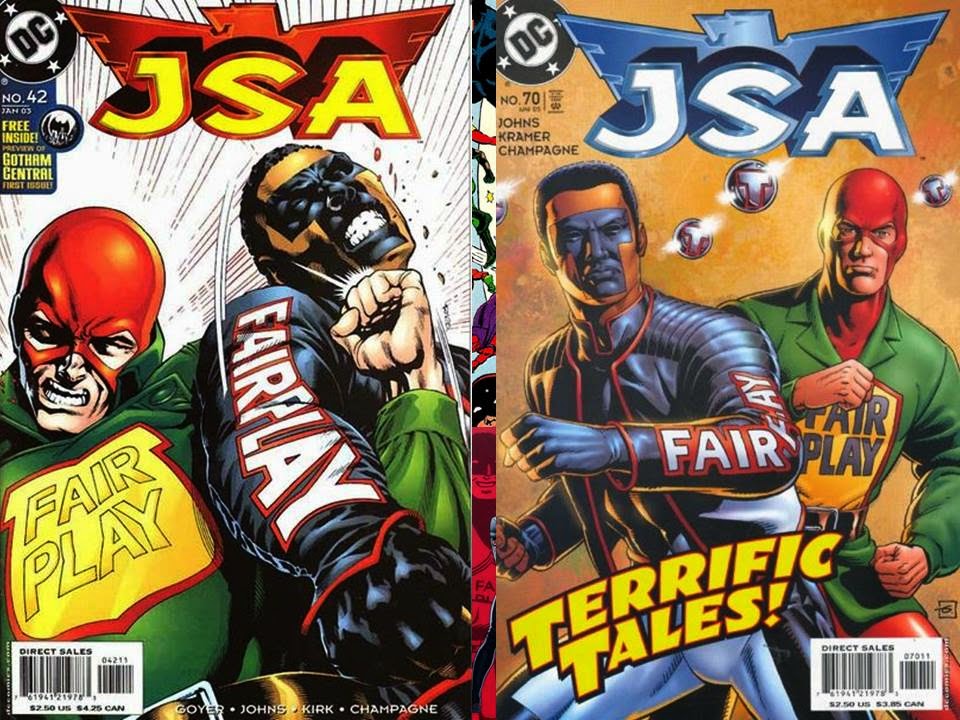 But, Terry did inspire the next generation and in Spectre #54 (June, 1997 by John Ostrander and Tom Mandrake), with Michael Holt taking over the mantle of Mr. Terrific to protect the next generation from gangstas as well as joining the JSA...and Michael even met Terry thanks to a few time travel tales in the JSA! 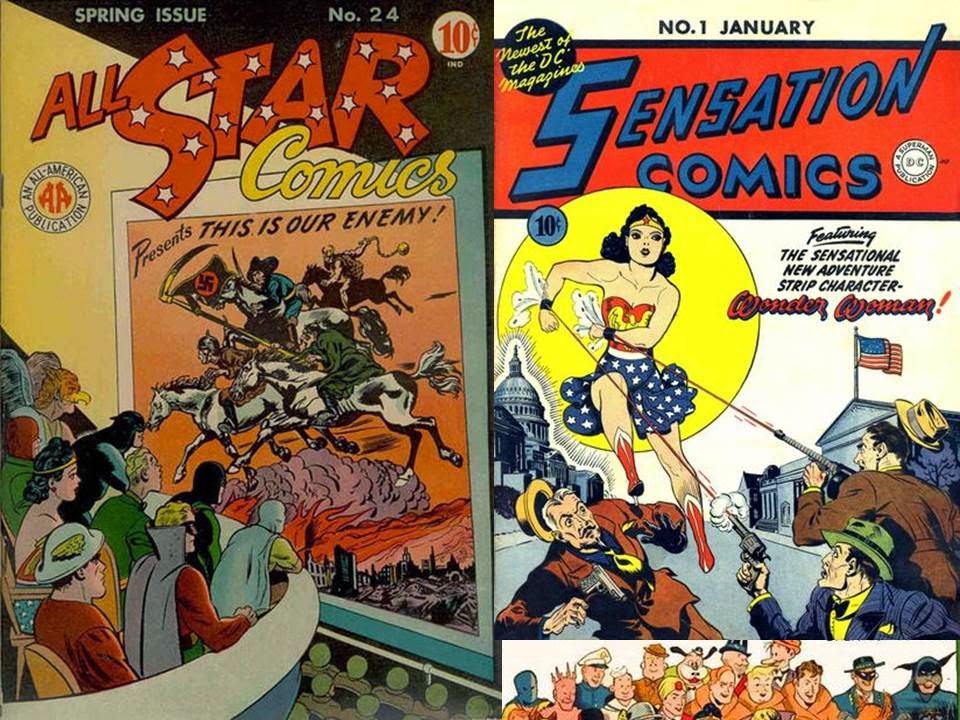 While very similar to Mr. Terrific, Wildcat became the poster child for the JSA in later years.  Wildcat also began in Sensation Comics #1 (January, 1942, but by Bill Finger and Irwin Hasen), and boxer Ted Grant had been framed for the death of Socker Smith (Smith had trained Grant, and their managers wanted Grant to take a dive, Ted didn't, so they poisoned Smith, and Grant got the blame for his death).  Inspired by a kid recounting an adventure of Green Lantern, Ted decided to make his own costume, becoming Wildcat (and clearing his name as well!). 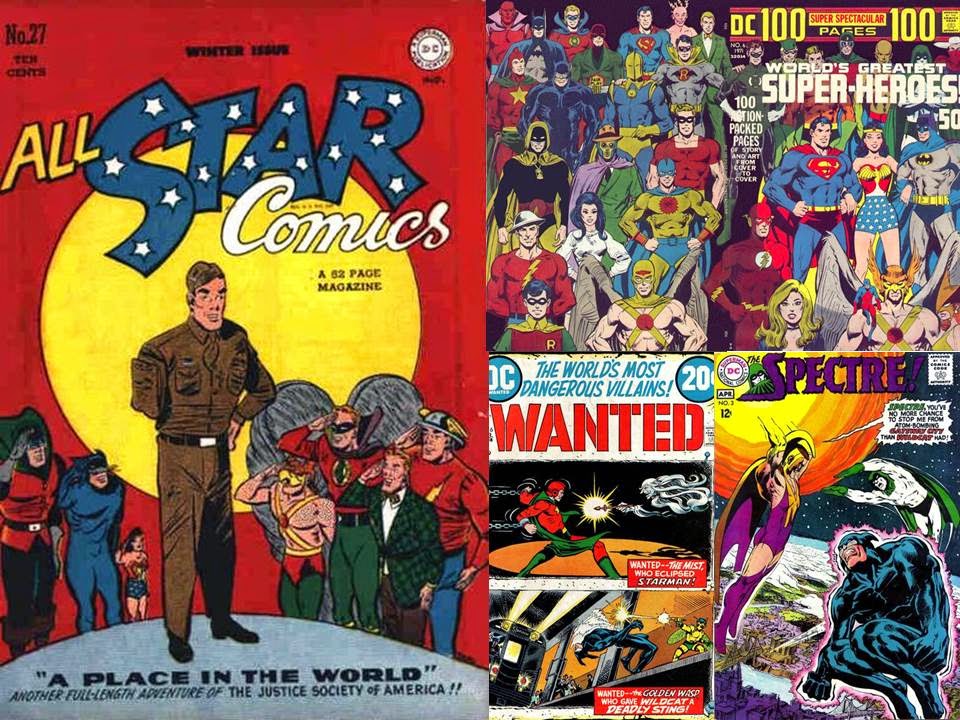 Wildcat also joined the JSA in All-Star Comics #24 (Spring, 1945), but he also came back for All-Star Comics #27 (Winter, 1945), as well as being in the first two issues of Comic Cavalcade of the 1940s, and the Big All-American Comic Book.  Wildcat just battled on, working with a private detective named Stretch Skinner and fighting foes such as the Yellow Wasp and the Huntress, until ending his Golden Age run with Sensation Comics #90 (June, 1949), though one unpublished battle of Wildcat and the Huntress came out in DC 100-Page Super Spectacular #6 (1971, which also reprinted the first JLA/JSA team up of Justice League of America #21-22 of 1963).  Wildcat himself didn't return in the Silver Age until Brave and the Bold #62 (October-November, 1965) fighting with the Sportsmaster and the Huntress alongside Starman and Black Canary, and even working with the Spectre once. 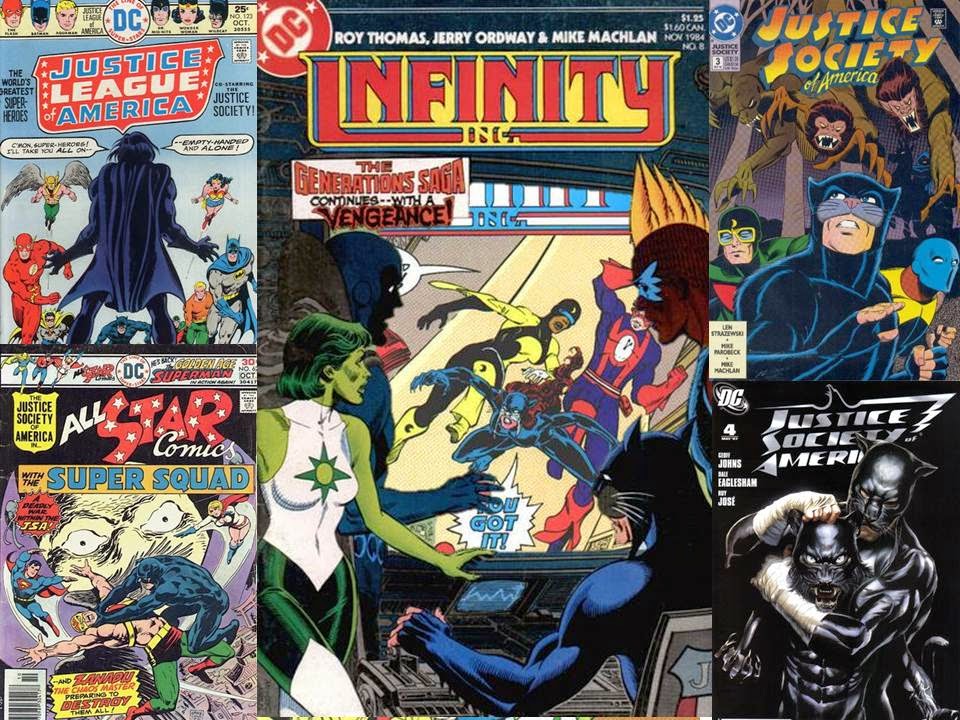 Wildcat was a frequent JSAer in JLA/JSA events, as well as being a major part of the 1970s revival of All-Star Comics (as well as getting his own Earth-1 counterpart that worked with Batman in 5 issues of Brave and the Bold, as well as the Creeper in one Super-Team Family).  Wildcat was injured during the Crisis on Infinite Earths, and taken out of time with them...and Yolanda Montez took over as Wildcat for a time with Infinity, Inc. until her unfortunate passing (but Ted returned with the rest of the JSA...and even helped train a new Wildcat to work in the JSA with him!). 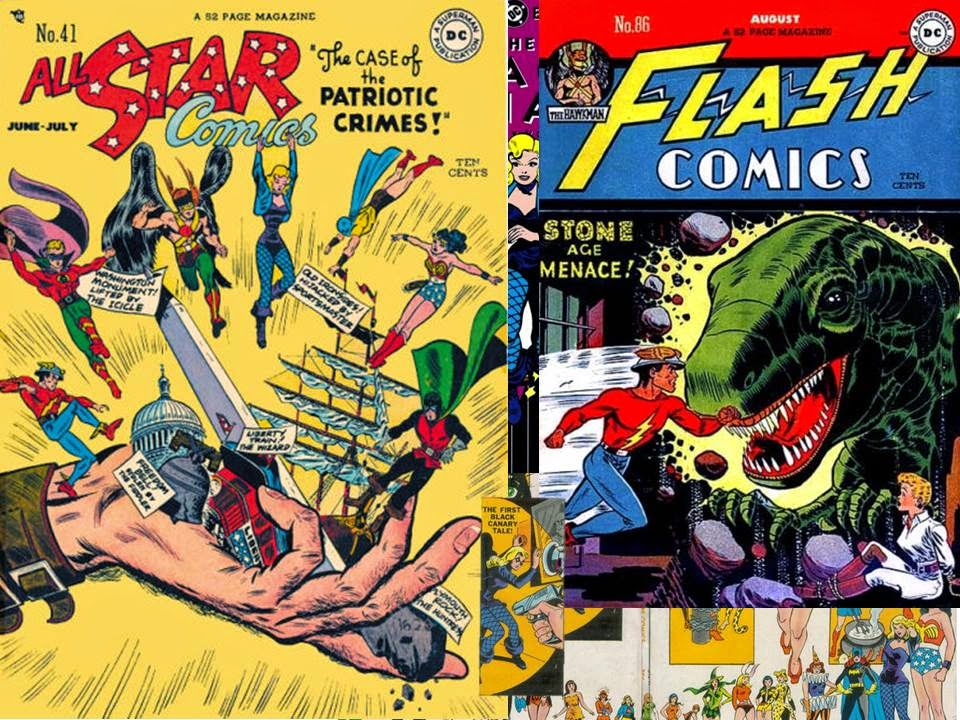 Black Canary started off her career as a criminal, facing off against Johnny Thunder in Flash Comics #86 (August, 1947, by Robert Kanigher and Carmine Infantino).  Dinah Drake was the daughter of a police officer, and trained to join the police force...but didn't make it.  Dinah's dad died due to the disappointment, and she inherited enough to open a flower shop.  Still wanting to do more, Dinah donned a blond wig and distracting outfit, and decided to fight crime using her martial arts skills and training as the Black Canary!  At first, she appeared to be a criminal robbing other criminals, running afoul of Johnny, but her true heroic nature soon shown through, working with the JSA on a few cased, and taking over Johnny's feature in Flash Comics with Flash Comics #92 (February, 1948) and meeting private detective Larry Lance, and joining the JSA (also taking Johnny's place) with All-Star Comics #41 (June/July, 1948), which was also the second appearance of the Injustice Society of the World! 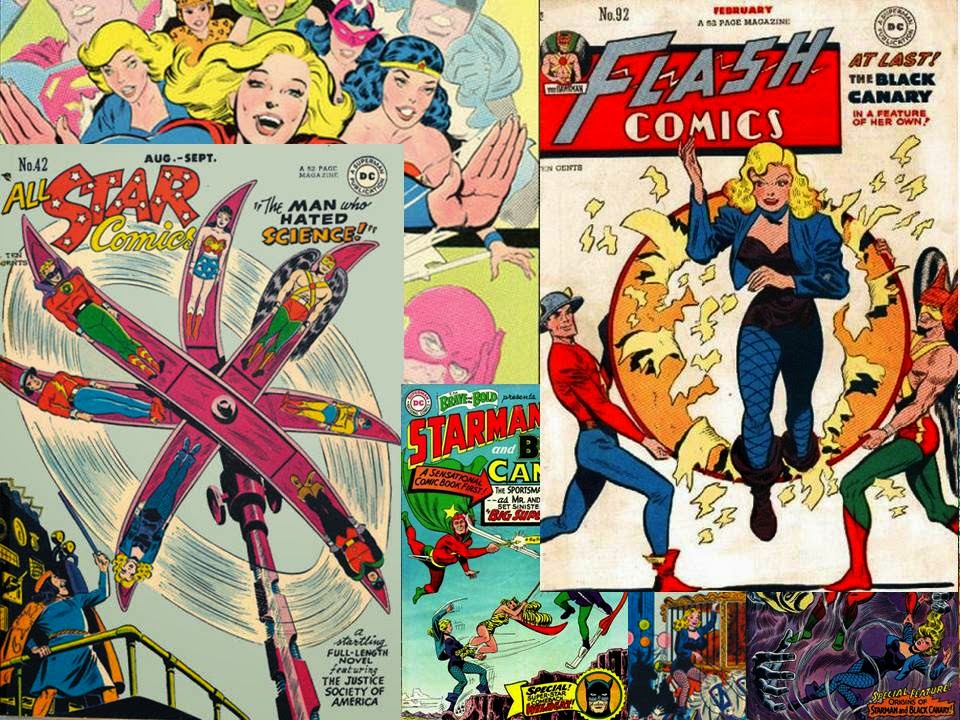 Black Canary continued on in Flash Comics until Flash Comics #104 (February, 1949), also having one Golden Age adventure in Comic Cavalcade #25, and two unpublished Golden Age Black Canary adventures ended up being presented after the Golden Age, in DC Special #3 (April/June, 1969) and in Adventure Comics #399 (November, 1970).  All of Black Canary's Golden Age solo adventures are in the Black Canary Archives #1.  Black Canary also continued as a member of the JSA until their original end in All-Star Comics #57 (February/March, 1951), and the story behind the story in Adventure Comics #466 (November/December, 1979), and returning to action with the JSA in Justice League of America #21 (August, 1963). 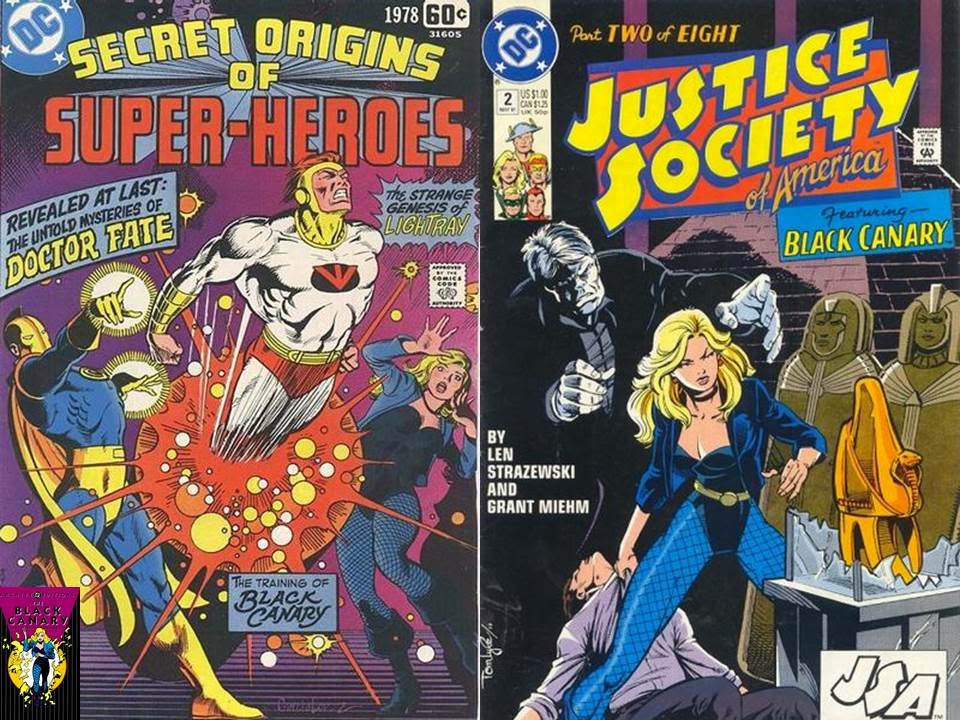 Between the last Golden Age adventure and the Silver Age Crisis, Black Canary married Larry Lance (as revealed in DC Special Series #10 of 1978), becoming Dinah Drake Lance, working with the JSA in the JLA/JSA team-ups, as well as two meeting with Starman in Brave & the Bold #61 (where Larry & Dinah's marriage was first revealed) and #62 (1965, tales also in the Black Canary Archives).  The JLA/JSA team-ups proved fatal for Larry, as at the end of the battle against Aquarius in Justice League of America #73 and #74 (August/September, 1969), he gave up his life to save Dinah and the worlds.  This prompted Dinah to leave Earth-2 and go to Earth-1 (and more of the story will be revealed under Black Canary's JLA entry....).

End of An Era 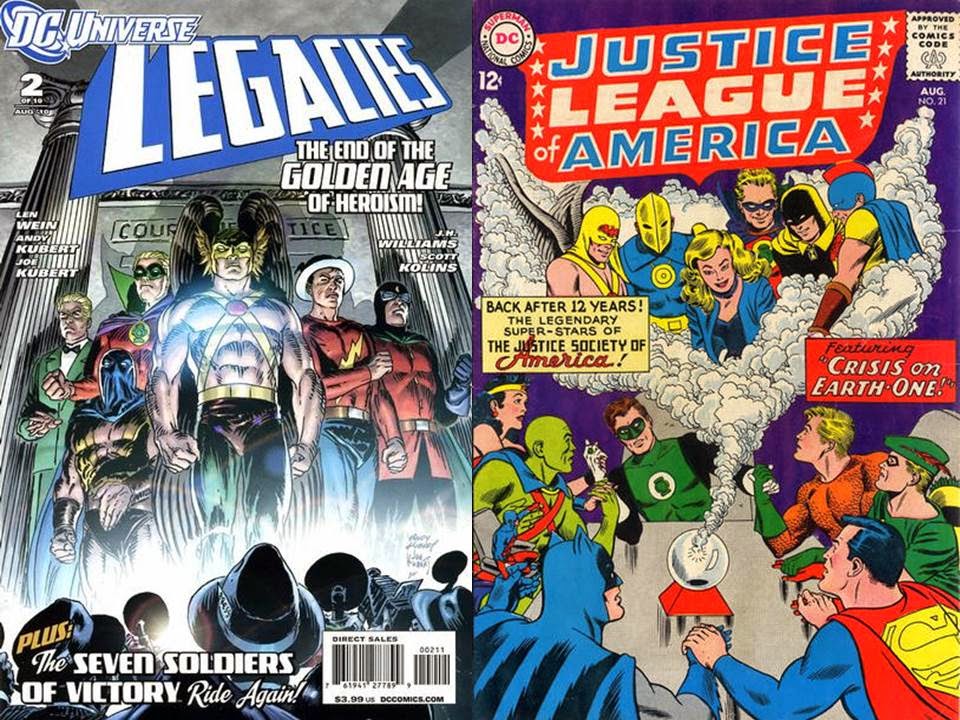 With All-Star Comics #57 (February/March 1951), the Golden Age JSA adventures ended (why that happened was revealed in Adventure Comics #466, but the JSA returned with the return of the Flash (Jay Garrick) in Flash #123, then the team in Flash #137, and with Justice League of America #21, an annual tradition of multi-Earth Crises started....

...but the JSA wasn't quite done with the Golden Age yet! 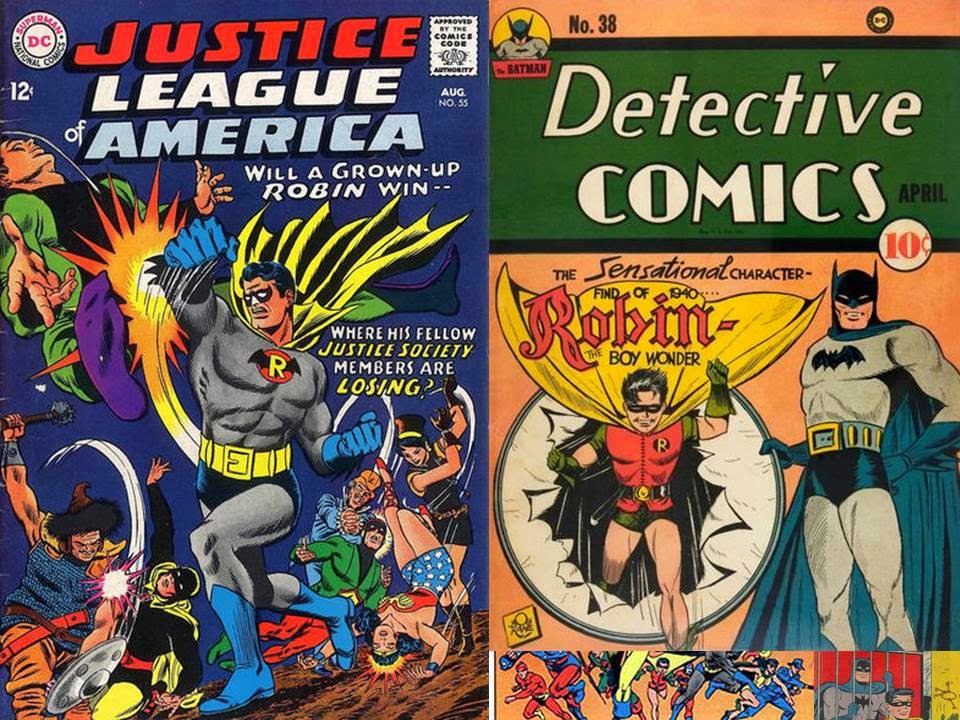 Robin (Dick Grayson) was a boy, working with Batman ever since Detective Comics #38 (April, 1940, by Bob Kane, Bill Finger and Jerry Robinson), but as time passed, the Boy Wonder got older (though it wasn't really reflected in the comics of the day).  The acrobatic youth even had his own solo run of stories in Star-Spangled Comics #65-#130 (1947-1952), even though Batman joined in the tales toward the end of the run, and gaining his own foes, like the Clock, the Fence, George Midas and a Boy Commandos' foe of Crazy-Quilt), and was a member of the wartime All-Star Squadron (also along side Batman). It was revealed in Justice League of America #55 (August, 1967), that Robin had indeed grown up, developing his own new costume (influenced by Batman), and he quickly became a member of the JSA as well!  Eventually, Robin adopted a new costume, and he continued to work with the JSA (and Infinity, Inc., as well as others, as detailed here) until the Crisis on Infinite Earths put an end to Earth-2 for a time.

The Mother of Them All 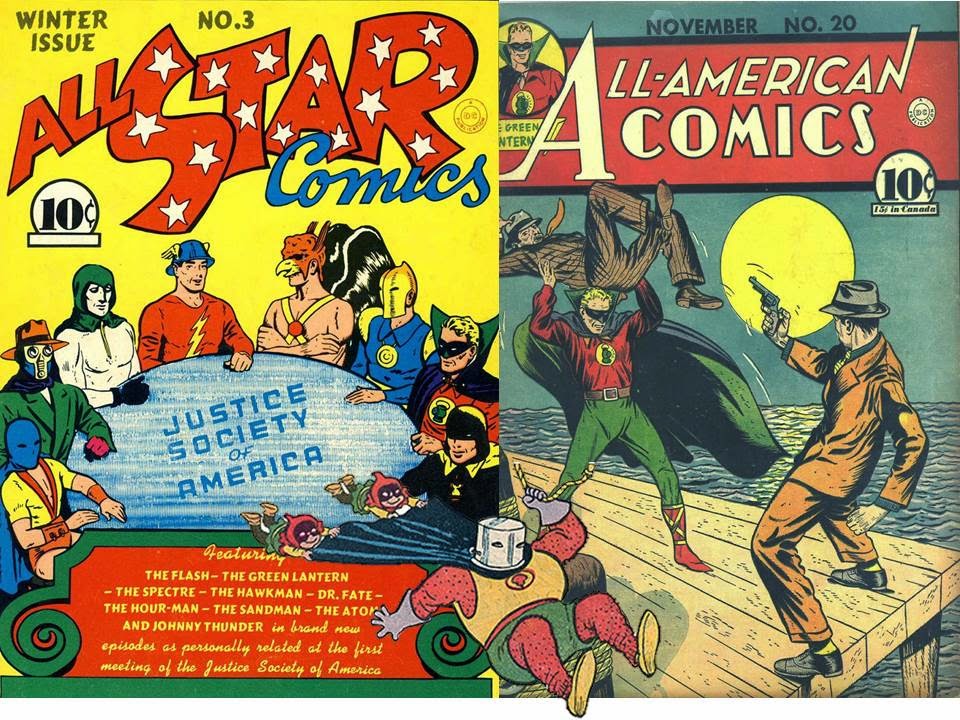 Well, not quite, but worth mentioning...the Red Tornado!  Abigail "Ma" Hunkel (first appearing in All-American Comics #3 of June, 1939 by Sheldon Mayer) was just a lady trying to take care of her kids (Huey and Amelia, also known as "Sisty") and her neighborhood (including "Dinky" Jibbet and his father, "Scribby" Jibbet)...until the mob kidnaps Sisty and Dinky!  The police are unable to help, and that's when Ma learns of Green Lantern...and comes up with a plan to free the kids (who are terrorizing the hoods who took them), by becoming the Red Tornado (all happening in All-American Comics #20, November, 1940 also by Sheldon Mayer, under a Green Lantern cover!).  Though possessing no powers other than two wild kids and some street smarts, she's able to defeat the hoods (who are unaware that she's a woman under her mystery man outfit).  Ma continues to do good in the neighborhood, soon aided by the Cyclone Kids (Sisty and Dinky, starting with All-American Comics #24, March, 1941).  Ma's adventures as the Red Tornado continued until All-American Comics #59 (July, 1944). 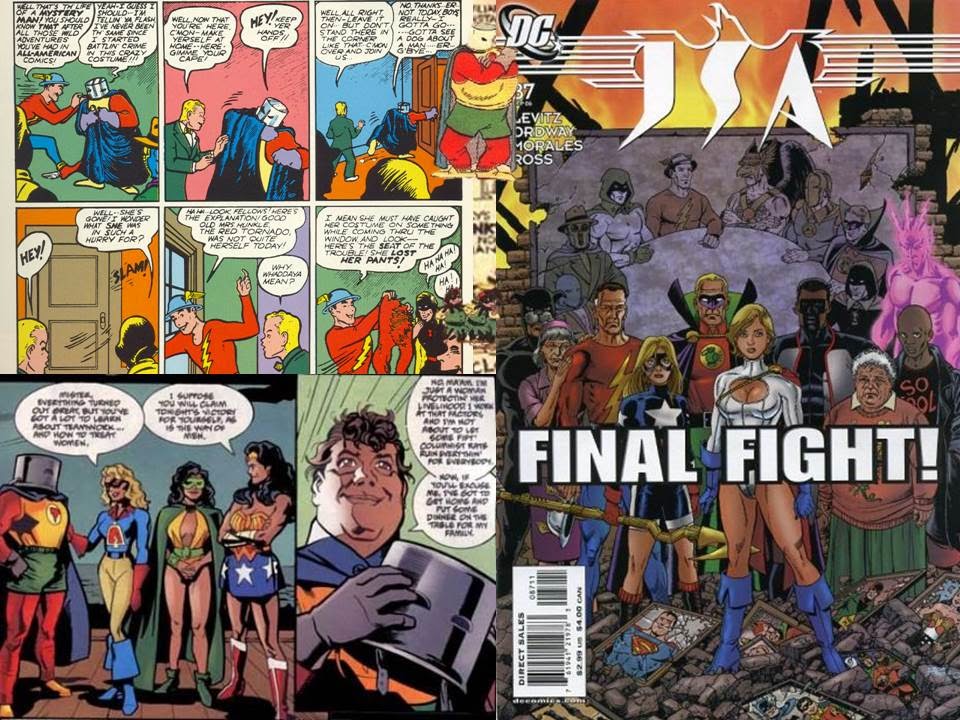 The Red Tornado was there for the first meeting of the JSA, but couldn't stay due to ripping her costume!  Ma was well loved by the JSA, and even considered a member (but she wasn't).  Still, there was a Red Tornado to come into the JSA (and Ma even came back herself to help out here and there as well, like explaining being a hero to Liberty Belle, Phantom Lady and Wonder Woman in DCU Holiday Bash #2 of 1998!). 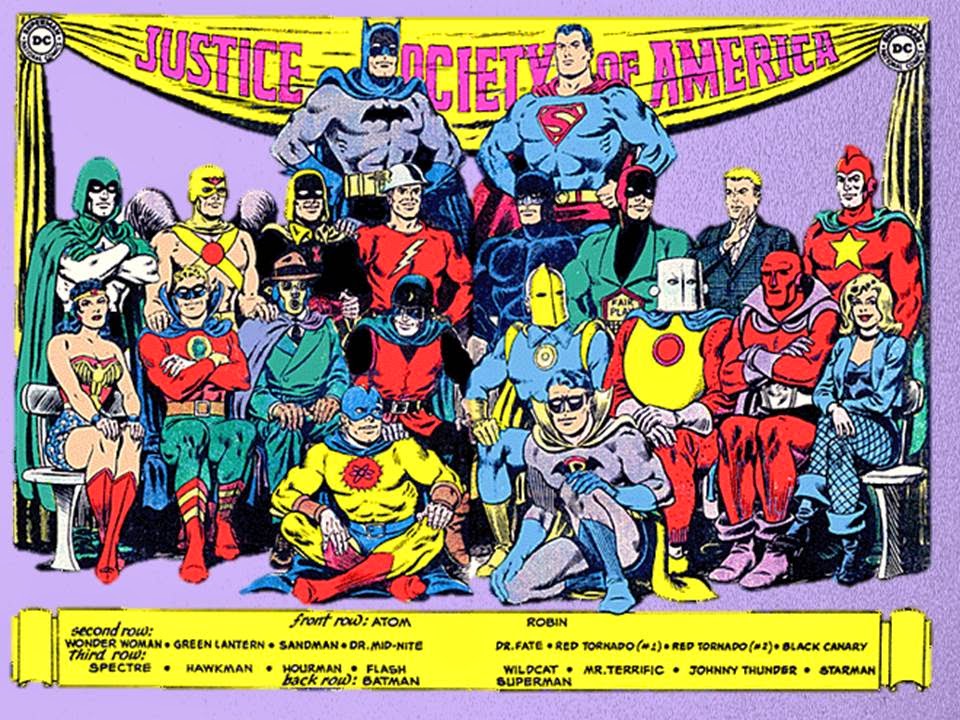 More to come, as the JLA and JSA grew closer, and as you can see, there's another Red Tornado on the horizon!