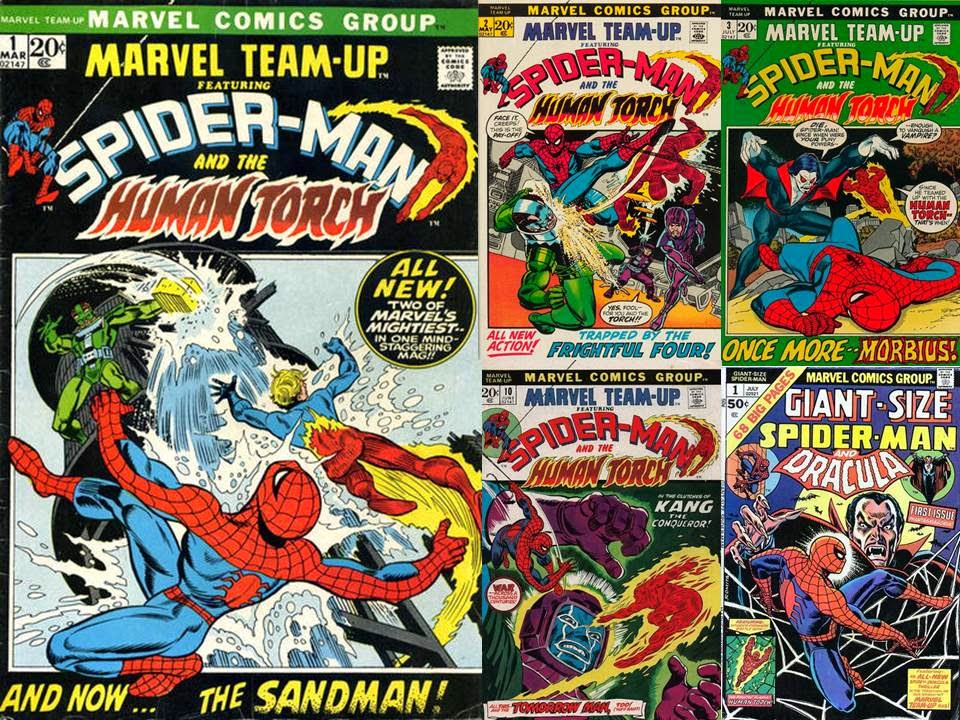 Back in the 1970s, Marvel produced Marvel Team-Up, a book to focus on Spider-Man meeting the rest of the Marvel Universe, and a frequent partner of the amazing arachnid was the Human Torch…
…but Spider-Man was headed to a Giant-Size Spider-Man book, so they needed a new lead for MTU!

For a few issues in the early days, it was the Human Torch of the Fantastic Four who was meeting with other Marvelous co-stars!

These issues are as follows…

The Torch meets the Jade Giant 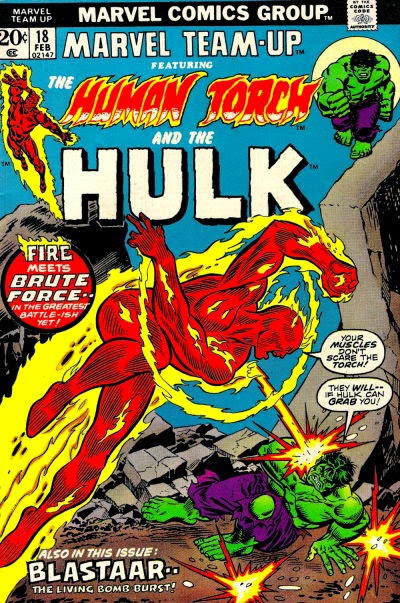 
This little gem was written by Len Wein, and featured art by Gil Kane in "Where Bursts the Bomb"! 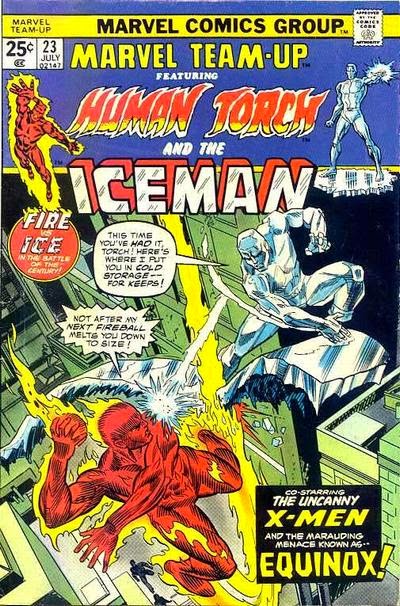 Next up, was Marvel Team-Up #23 (July, 1974), where the fiery Johnny Storm faced off against the X-Men’s Iceman, and the two of them met the new menace of Equinox, the Thermodynamic Man in "The Night Of The Frozen Inferno"!

Except Equinox had already faced Spider-Man (who was too busy to fight him for long, as he was meeting Dracula in Giant-Size Spider-Man #1, which also came out that month…and had the X-Men preparing for their own explosion in popularity with Giant-Size X-Men #1).


All these tales were written by Len Wein, and the art in the MTU issue was by Gil Kane! 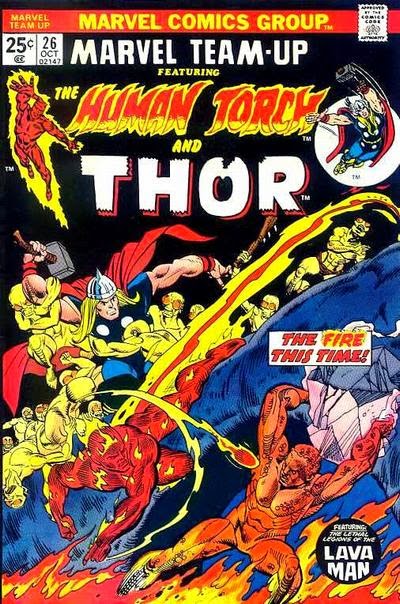 For Marvel Team-Up #26 (October, 1974), it was time for the Torch to team up with the mighty Thor, and face the menace of the Lava Men (foes of Thor and the Avengers, from Journey Into Mystery #89 and Avengers #5, both by Stan Lee and Jack Kirby, and were the underground dwellers only two previous appearances before this issue).

These foes had a rock hard tenacity!


The Asgardian and the young flaming one did well against these foes, in this tale entitled "The Fire This Time" written by Len Wein and drawn by artist Jim Mooney! 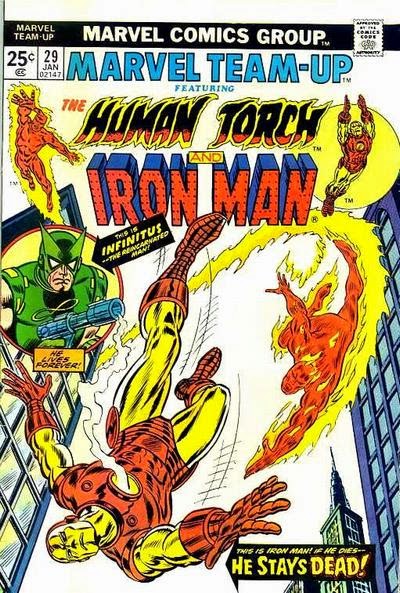 With Marvel-Team-Up #29 (January, 1975), things changed a little, as the story was written by Gerry Conway (though art was still by Jim Mooney), as the Human Torch ended up working with the armored Avenger, Iron Man (a.k.a. Tony Stark)!


This team faced off against a new villain, Infinitus, the Reincarnated Man.  Oddly, Infinitus hasn’t found his way back into any stories as of yet…so he didn’t seem to make any impression on the fans…even with the title of the story..."Beware The Coming of...Infinitus!  Or How Can You Stop the Reincarnated Man?"

So Hot With Twice the Flame 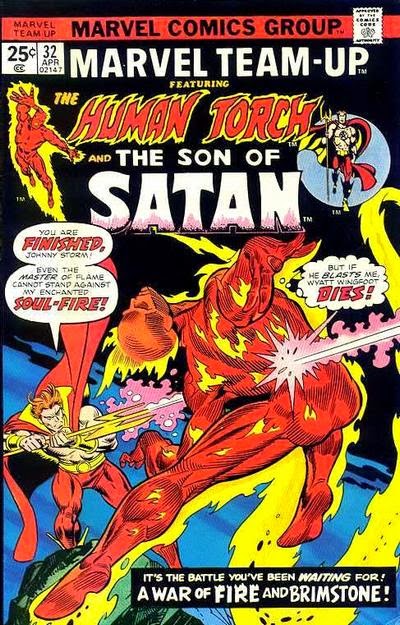 Now Marvel Team-Up #32 (April, 1975) was a real barn-burner, teaming the Torch up with the only character he met in this run NOT co-created by Stan Lee…that being Damion Hellstrom, the Son of Satan!


This also features the first team-up where Johnny met his co-star for the first time within the pages of MTU!


This tale entitled "All The Fires In Hell...!" was written by Gerry Conway and drawn by Sal Buscema had the two facing off against Dryminextes (a demon who had possessed members of Wyatt Wingfoot’s tribe). 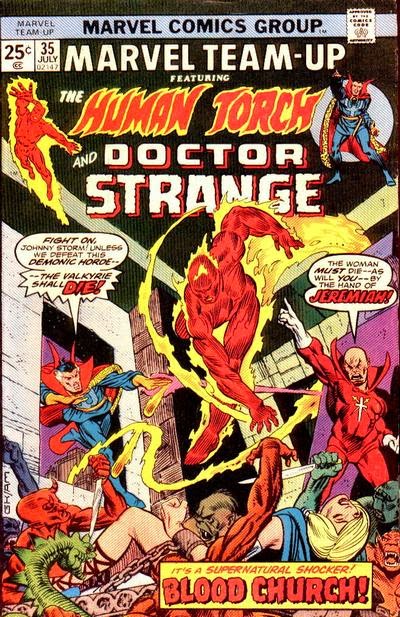 The last of Johnny’s spider-less team-ups was in Marvel Team-Up #35 (July, 1975) and continued from the previous two issues, and featured the Torch working with the sorcerer supreme Doctor Strange (Stephen Strange) to save his fellow Defender, the Valkyrie, from the clutches of cult leader, Jeremiah! 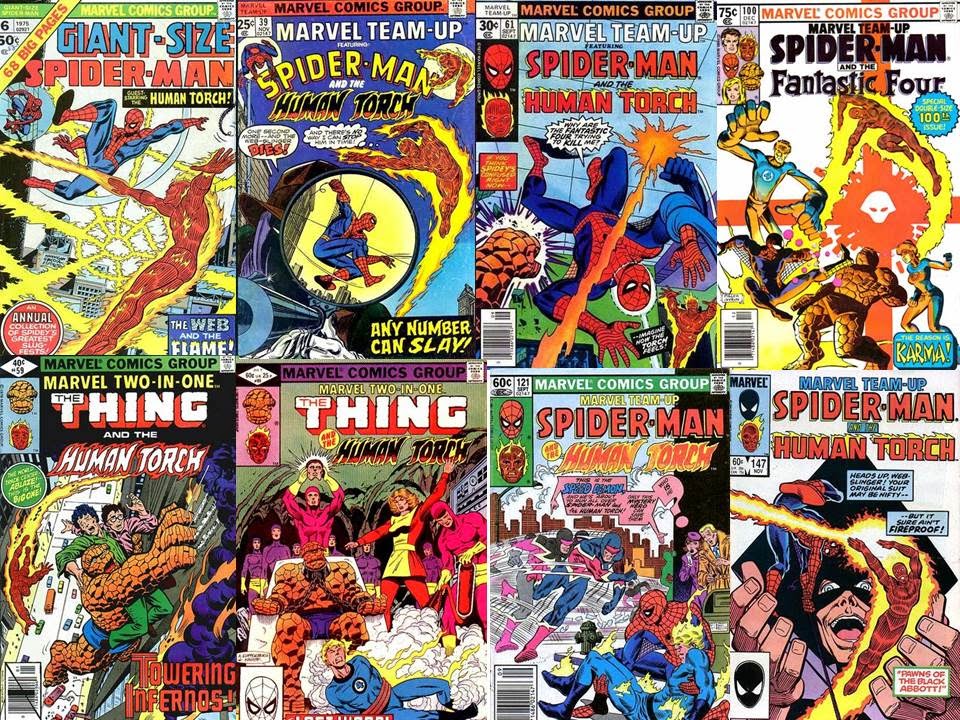 But, the Torch wasn’t done with Marvel Team-Up, as he continued to meet Spidey in many future issues, and even worked with his Fantastic Four teammate, the Thing, in issues of the Thing’s team-up book, Marvel Two-In-One!


Flame on, Johnny Storm!
Posted by Dave's Not Here Comic Blog at 5:30 AM