3-D Man In Your Face 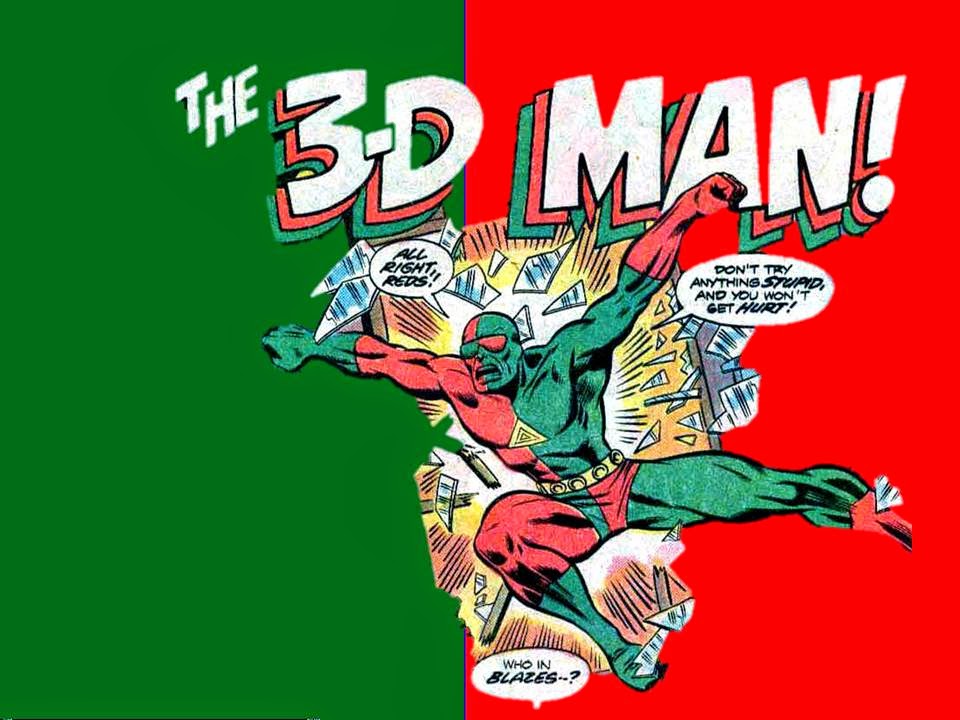 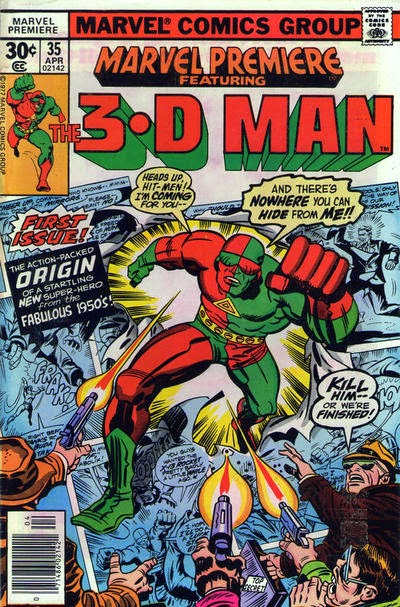 Premiering in Marvel Premiere #35 (April, 1977 by Roy Thomas and Jim Craig, and a cover by Jack Kirby), was the story of the Chandler brothers, Charles and Hal.  Chuck was a test pilot for NASA in 1958, taking out the experimental XF-13 when he had a real close encounter, with some Skrulls (a nasty shape-shifting alien race who would come to menace the Fantastic Four and the rest of Earth's heroes).  Chuck was able to escape, blowing up the Skrull ship, but it bathed him in an odd energy, and as he approached his brother Hal (as Chuck had landed at their "secret spot" in the desert), the XF-13 blew up, turning Chuck into red and green images on Hal's glasses. For some reason, Hal later thought to put on those glasses and look at a wall, and thus came into being....the 3-D Man!  Blessed with 3 times the abilities of a normal man, Chuck Chandler materialized in a red and green hybrid of his flight suit (sending his brother into a coma), and could appear to fight crime (and sense Skrulls) for 3 hours at a time (and this was his first adventure out and about). 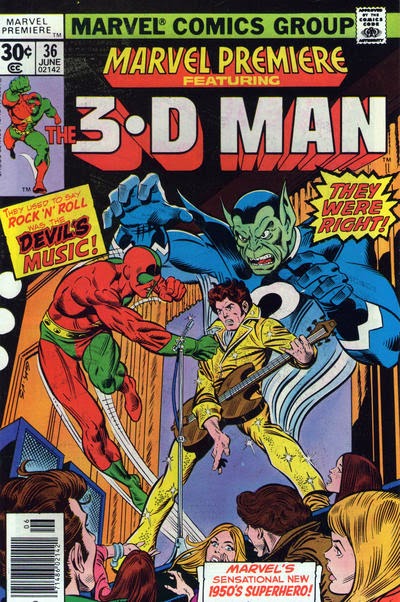 With the second appearance of 3-D Man in Marvel Premiere #36 (June, 1977, by Roy Thomas and Jim Craig, with a plotting assist by Don Glut, and cover by Gil Kane and Joe Sinnott), the action kicked into high gear, with the second manifestation of 3-D Man (as well as Zirksu, the Skrull that he faces), manipulating new rock and roll sensation, Vince Rivers, into inciting the nation's youth into a violent frenzy!  During the course of this adventure, we learn that merging seems to have cured Hal's polio, that Chuck's dad wasn't dealing well with the supposed death of his test pilot son, with Hal and Chuck's girlfriend, Peggy, getting closer as she drove Hal to a Vince Rivers concern, where the 3-Man foiled the Skrull's plot (but was unable to find the Skrull). 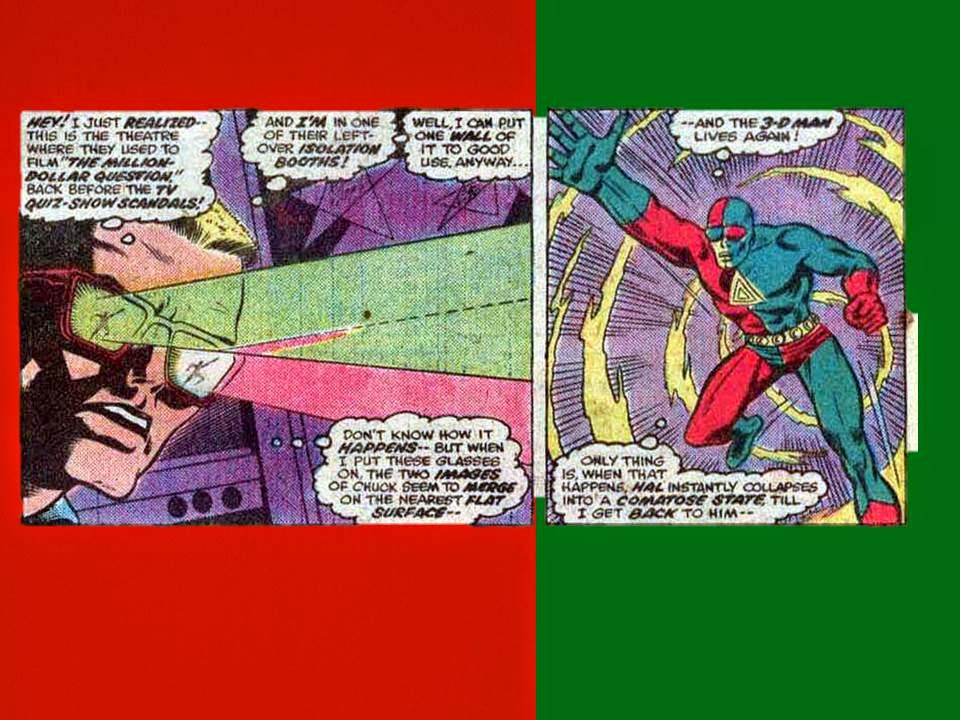 3-D Man also mentioned the Invaders and All-Winners Squad (previous hero teams that existed in the 1940s, which included Captain America, the Sub-Mariner and the original Human Torch), and 3-D Man met Peggy, and in a letter's page column, Roy Thomas explained his fascination with the 1950s and how that let to him creating this hero of the 1950s in the 1970s! 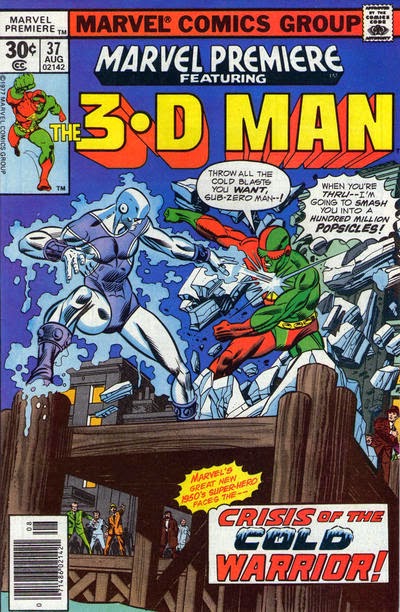 In Marvel Premiere #37 (August, 1977, also by Roy Thomas and Jim Craig, and plot assist by Don Glut, and cover by Gil Kane and Joe Sinnott), Zirksu stepped up his plans against 3-D Man, having followed the hero (who found the device the Skrull used to incite the riots at the concert), and blasted 3-D Man and Hal as the multi-hued hero returned to Hal's body for the third time (though the Skrull was surprised there was not more of an affect of the blast).  Hal returned home with Peggy, and Zirksu (taking the guise of then Vice President Richard Nixon) helped a Commie hating professor named Sinkowitz transform himself into the Cold Warrior (using Skrull science to enhance the professor's own), making a foe for the 3-D Man (who was half-red after all).

When 3-D Man was next manifested by Hal, Hal's mind was in control...and he fought the Cold Warrior and beat him.  This was enough of a setback for the Skrull abandon his Nixon identity and to disappear...as did the 3-D Man for a time! 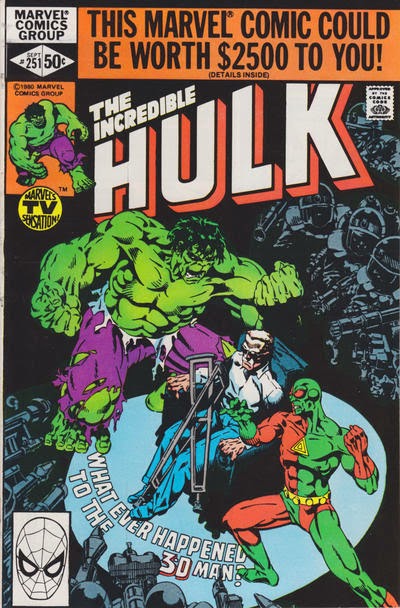 But, the 3-D Man did come back, in the Incredible Hulk #251 (September, 1980, by Bill Mantlo and Sal Buscema, with a cover by Michael Golden), with quite some time having passed for Hal and family...

...Hal had married Peggy Clark, and they had two sons, Chuck Chandler and Hal Chandler Jr., and Hal had retired the 3D-Man, concentrating instead on his career and family.

When the family discovered Bruce Banner, Hal invited him into his home (but in reality, Hal recognized Bruce as the alter-ego of the Hulk, and called the military to bring him in).  At the same time, Rick Jones (a friend of the Hulk's) had encountered trouble and sent out a distress call via ham radio to the Teen Brigade and more (with the younger Chuck Chandler hearing the call on his dad's equipment).  The Hulk changed in the house, prompting Hal to call on 3-D Man again (who manifested with Chuck's mind) and the Hulk and 3-D Man battled for a bit, as 3-D Man also tried to process all the changes that had happened since he last appeared!  3-D Man eventually helped Hulk leave to go aid Rick and his friends, and Hal came clean with Peggy about the 3-D Man and how the original Chuck Chandler survived within him (and dealing with their destroyed house in Incredible Hulk #252).  3-D Man also appeared in the gathering of heroes in Marvel Super Hero Contest of Champions #1 in June, 1982, but he was just a face in the crowd at that point... The 3-D Man stayed out of the limelight yet again, but there was a new hero, Triathlon (Delroy Garrett Jr.), who premiered in Avengers #8 (September, 1998, by Kurt Busiek and George Perez) who seemed awfully familiar...and the link between him and 3-D Man was explored in Avengers #50-56 (also known as Avengers #465-471, as suddenly finding your roots became popular) in 2002, and the Avengers dealt with their time-traveling foe, Kang, and Triathlon returning Hal and Charles Chandler to Peggy (the brothers being minus their powers, but Triathlon still having the abilities of 3 men). 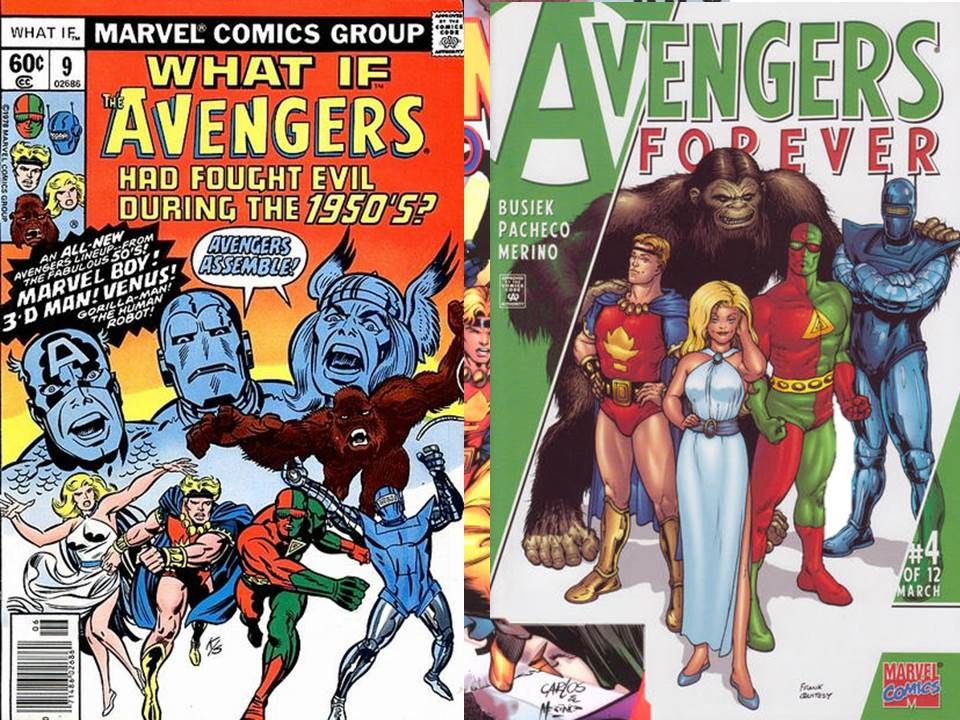 It was exactly that question that led to the alternate world of What If? #9 (June, 1978 written by Don Glut, and art by Alan Kupperberg and Bill Black, taking the concept from Roy Thomas) and the formation of the 1950s Avengers, with 3-D Man joining forces with heroes of Marvel Comics of the 1950s (Venus the goddess, the Human Robot, the Gorilla Man, Marvel Boy and foe of the Yellow Claw...Jimmy Woo).  The team battled a gathering of their foes, but Eisenhower did not want them to stay together as a team.  This reality was developed further in Avengers Forever #4 and #5 (in 1999), wherein a Skrull posing as Nixon tried to take over America's space program in 1959...at least until Immortus (another time traveling Avengers villain) shut down this reality.... 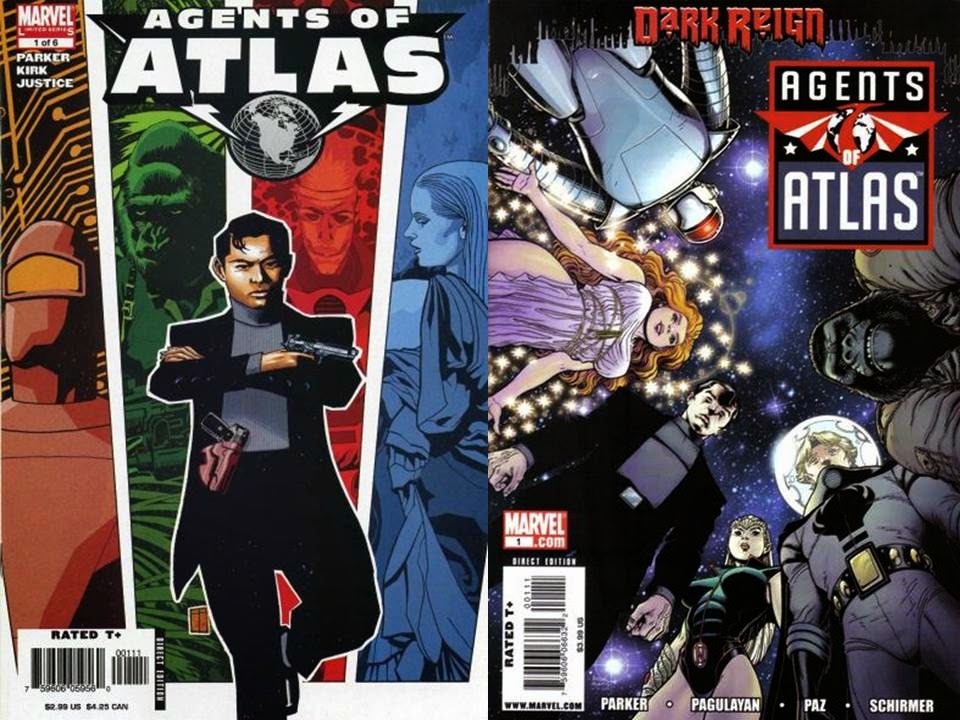 Thing is, minus 3-D Man (and including Namora, the Sub-Mariner's cousin), this group did form briefly in the regular Marvel Universe in the 1958 (as Department Zero and the G-Men)...as S.H.I.E.L.D. later learned, and Jimmy Woo (who had later joined S.H.I.E.L.D., and was even part of the S.H.I.E.L.D. team to face Godzilla), and this group reformed as the Agents of Atlas when Jimmy was injured (in Agents of Atlas #1, October, 2006, the beginning of a 6 issue limited series by Jeff Parker and Leonard Kirk, which let to the regular Agents of Atlas series which lasted 11 issues in 2009). 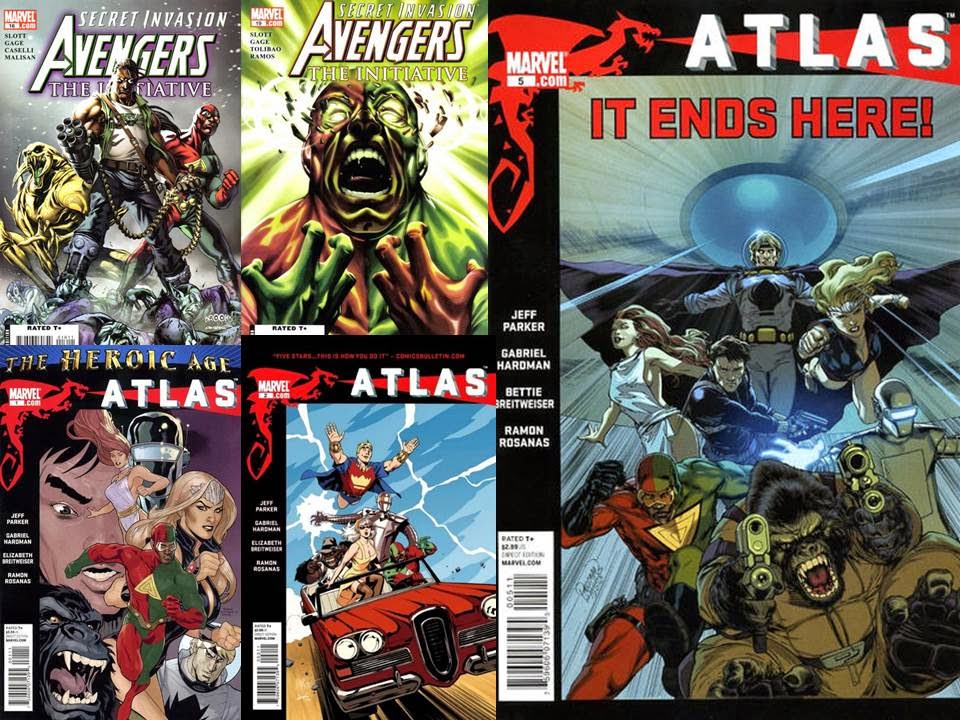