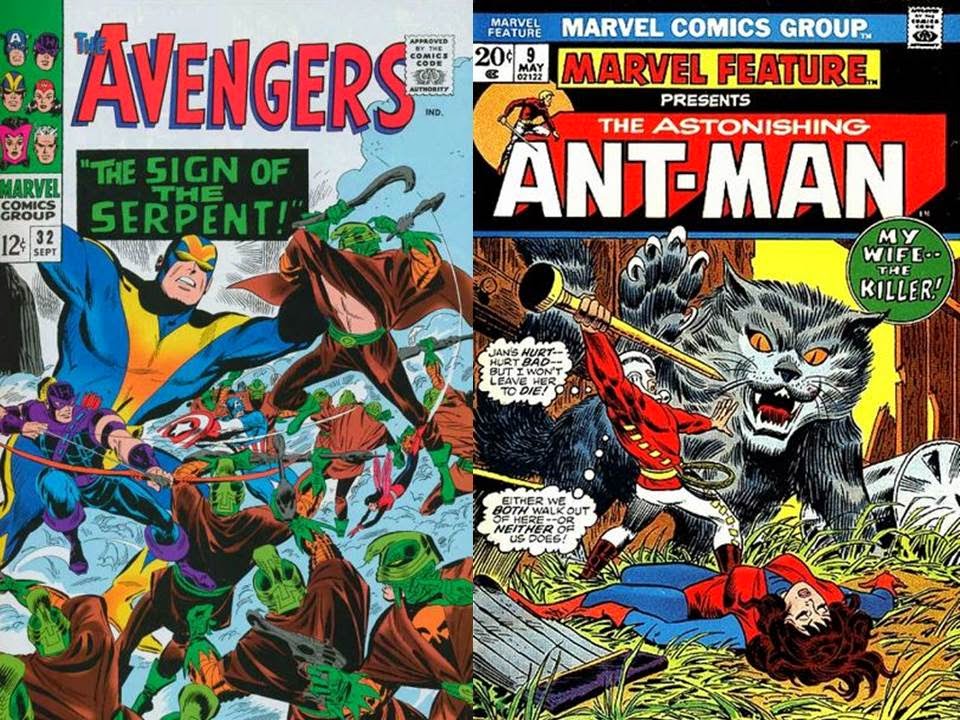 Dr. William Barrett Foster was just the right guy in the right place at the right time...working for Tony Stark when Goliath (Hank Pym) was stuck at a larger size...and the Avengers were being attacked by the Sons of the Serpent in Avengers #32-35 (September to December, 1966, in stories by Stan Lee and Roy Thomas, with art by Don Heck).  This led to Foster being Pym's regular assistant (in Avengers #41, #54 (first appearance of Ultron), and #75 (first appearance of Arkon), and even being called in by the Avengers to help find the missing Ant-Man (Hank Pym, going back an identity) and Wasp in Marvel Feature #9 (May, 1973) during Ant-Man time being stuck at a smaller size and facing Dr. Nemesis. 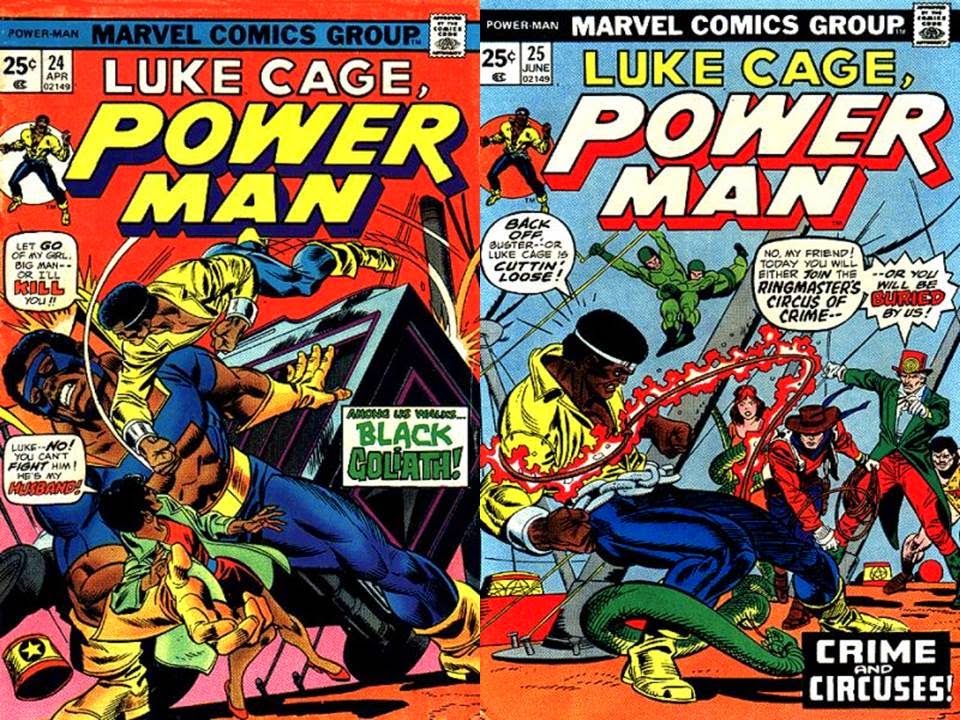 Bill Foster finally took on a starting role, as he turned into Black Goliath for two issues of Power Man (#24 and #25, by Tony Isabella and George Tuska, and then Tony and Bill Mantlo with Ron Wilson in April and June of 1975).  In these two issues, Power Man (Luke Cage, who had taken the Power Man name from an Avengers villain), was looking for his friend Claire Temple, and she had been looking for Bill, her ex-husband, whom she married and left before his working with the Avengers.  Bill had duplicated the Pym growth formula, and taken it while working at Stark Industries in Los Angeles, convincing her he was stuck at giant size and working at a circus to help fund research to allow him back to normal size.
Sadly, that circus was Ringmaster's Circus of Crime, which Power Man and Black Goliath ended up fighting; and Luke won Claire's heart.  Foster returned to LA...and his own series! 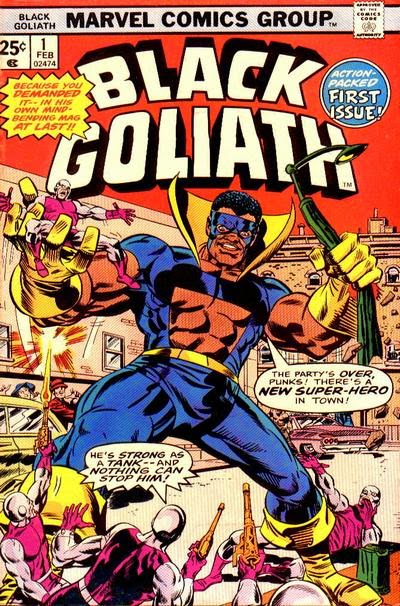 Black Goliath #1 (February, 1976 by Tony Isabella and George Tuska), details Bill Foster's return to the west coast and Los Angeles and Stark Industries facility there, and with encouragement from Hank Pym (the original Ant-Man, Giant-Man and Goliath, who was being Yellowjacket at the time with the Avengers, ignoring his size-increasing powers), decides to keep his Black Goliath identity and be a super-hero!

During his first battle with the radioactive villain Atom-Smasher (Ronald English), and was dosed in radiation (which gave Bill Foster some problems with his size changing....but more on that later..). 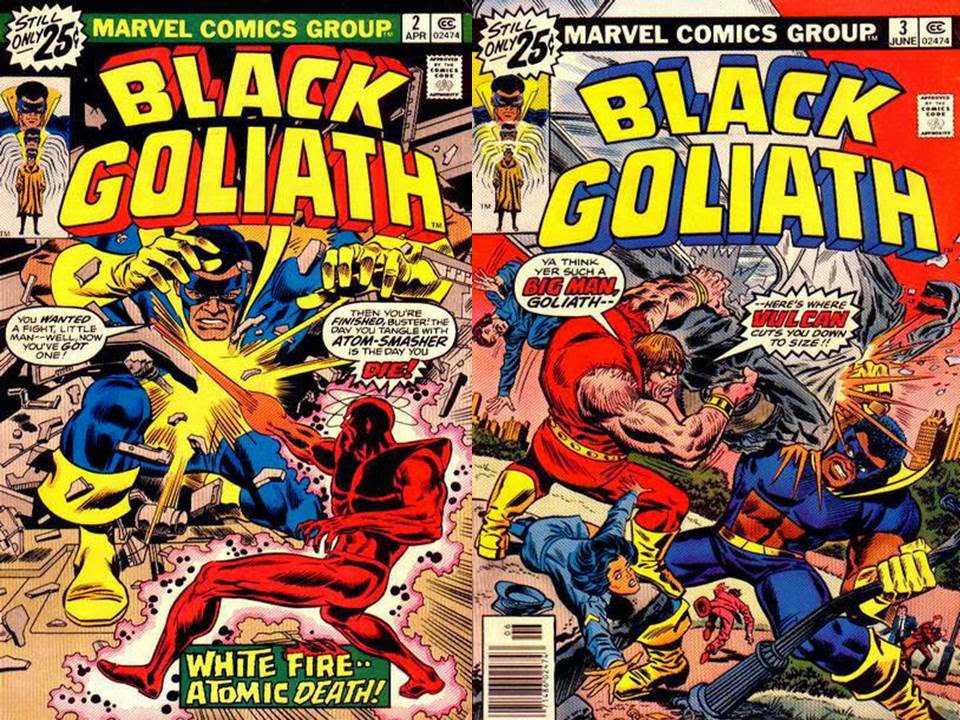 The battle continued into Black Goliath #2 (April, 1976, by Chris Claremont and George Tuska), where Black Goliath wins (but with a cost...).  Also lurking behind the scenes was Warhawk (a super-powered assassin who had previously fought Iron Fist, though that wasn't revealed until later).

With Black Goliath #3 (June, 1976, also by Claremont and Tuska), Warhawk killed the Atom-Smasher at the behest of his employer....and Black Goliath faced off against the new villain of Vulcan...a super-strong, angry man, who broke into the Stark Industries facility to get an experimental device. 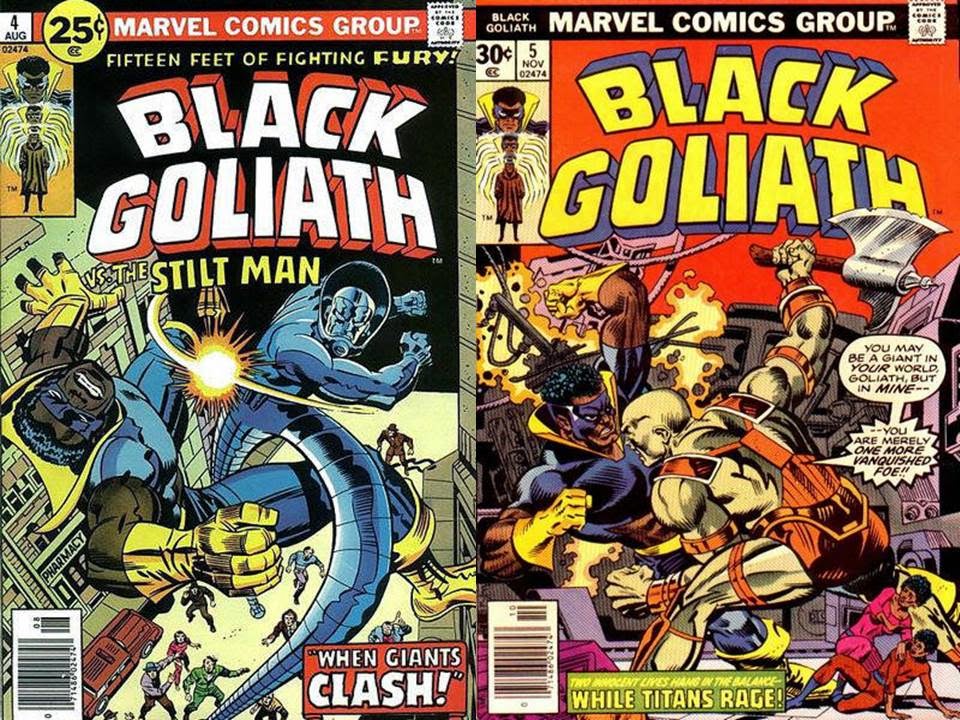 In Black Goliath #4 (August, 1976 written by Chris Claremont and art by Rich Buckler and Don Heck), Foster tries to find out what experiment was stolen from Tony Stark, but Stark wouldn't reveal the facts about it...and, while dealing with that, Black Goliath also had to face off against the old Daredevil foe of Stilt-Man, who used his Z-Ray to make Bill, and his friends Celia Jackson and her nephew Keith vanish... 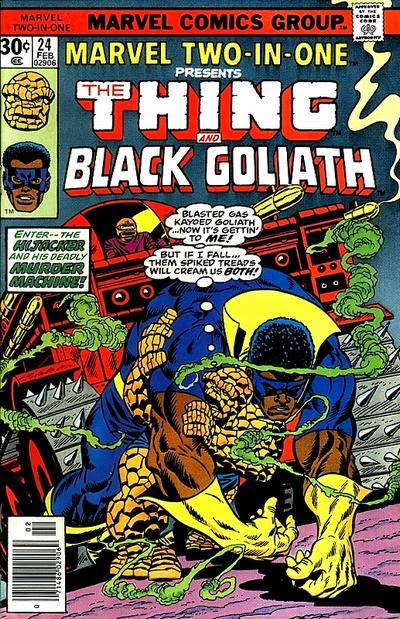 After a brief team-up with the Fantastic Four's favorite pilot, the blue-eyed bashful Thing, to face off against the old Ant-Man villain, the Hijacker (in Marvel Two-In-One #24 of February, 1977 by writers Bill Mantlo and Jim Shooter, and art by Sal Buscema and Pablo Marcus), where the aptly-named villain tried to steal items from the Stark West facility while the Thing was there helping Dr. Bill Foster test a new type of space suit...

....(and a friendship between Bill and Benjamin J. Grimm started, which helped Bill out more than once later in his life!).

Still, what of the Stilt-Man and that missing item? 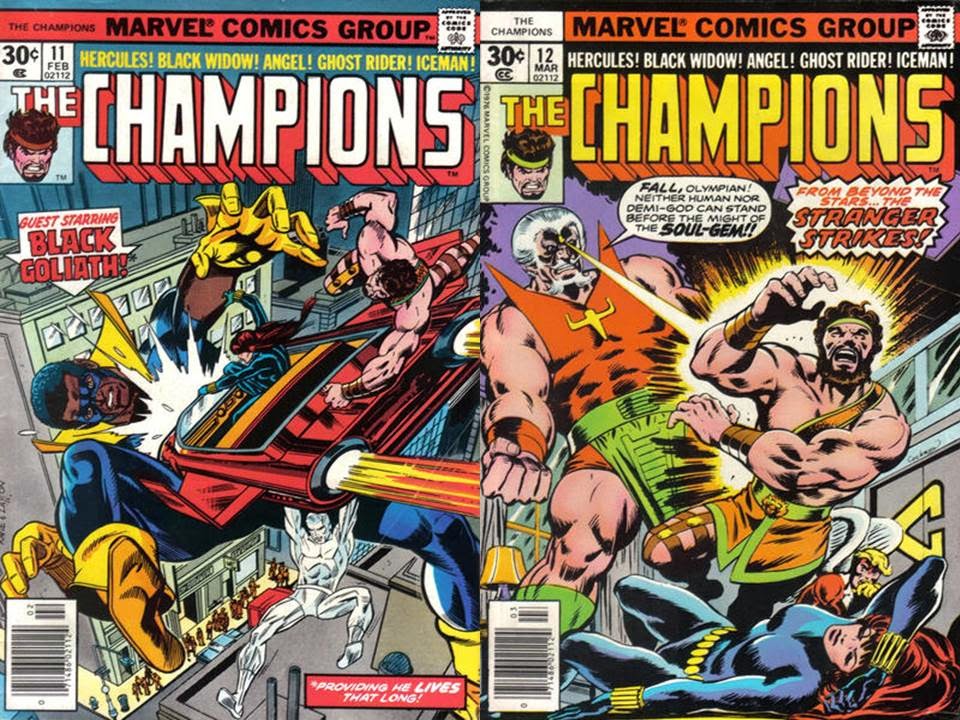 Well, check out Champions #11 and #12 (February and March of 1977), where Black Goliath works with odd west coast team of super-heroes (which include ex-Avengers Hercules and Black Widow, and ex-X-Men Angel and Iceman, as well as the demonic Ghost Rider), and things got Stranger (a cosmic villain that once faced the X-Men and Silver Surfer...). 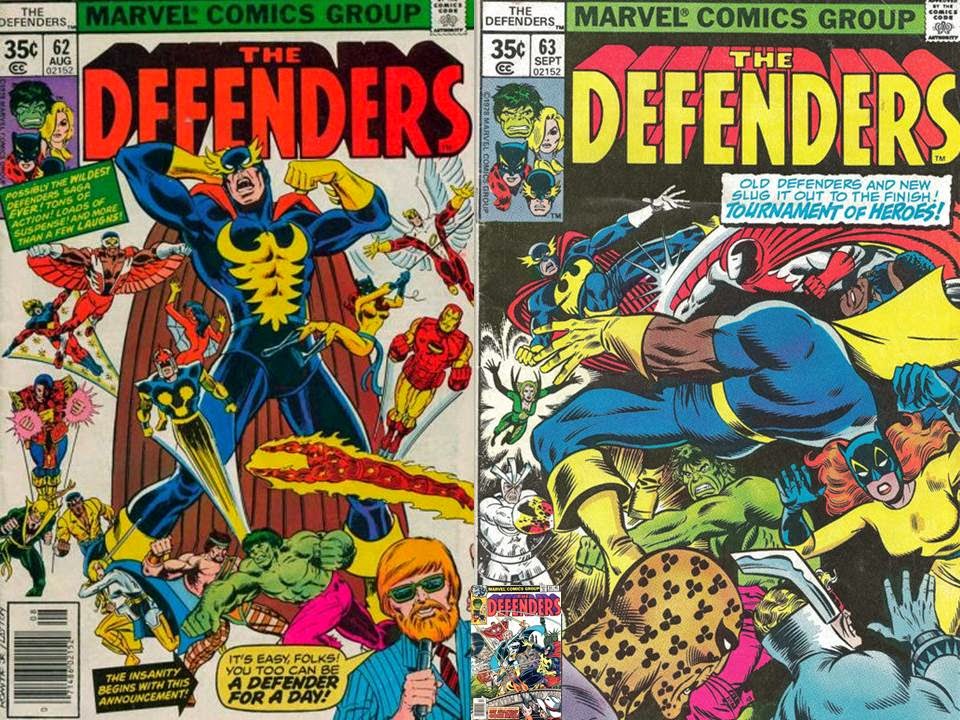 This led to a consulting job for Bill Foster with the Champions (which, sadly, didn't last long, as the team soon disbanded...sadder still as likely, Black Goliath would have also found a home there!).  Instead, he was looking for Spider-Woman (Jessica Drew) in Spider-Woman #4 (July, 1978), and ended up being a "Defender for a Day" (along with heroes like Captain Marvel, Captain Ultra, Falcon, Havok, Hercules, Iron Fist, Jack of Hearts, Marvel Man, Ms. Marvel, Nova, Paladin, Polaris, Prowler, Son of Satan, Stingray, Tagak, Torpedo and the White Tiger; heroes who hadn't really made it or were regular team members of any team at the time, all to the frustration of real Defender, Nighthawk), all called together when a documentary maker named Dollar Bill made a call for more Defenders members in Defenders #62-#65 in 1978.  This was also the last appearance of Black Goliath.... 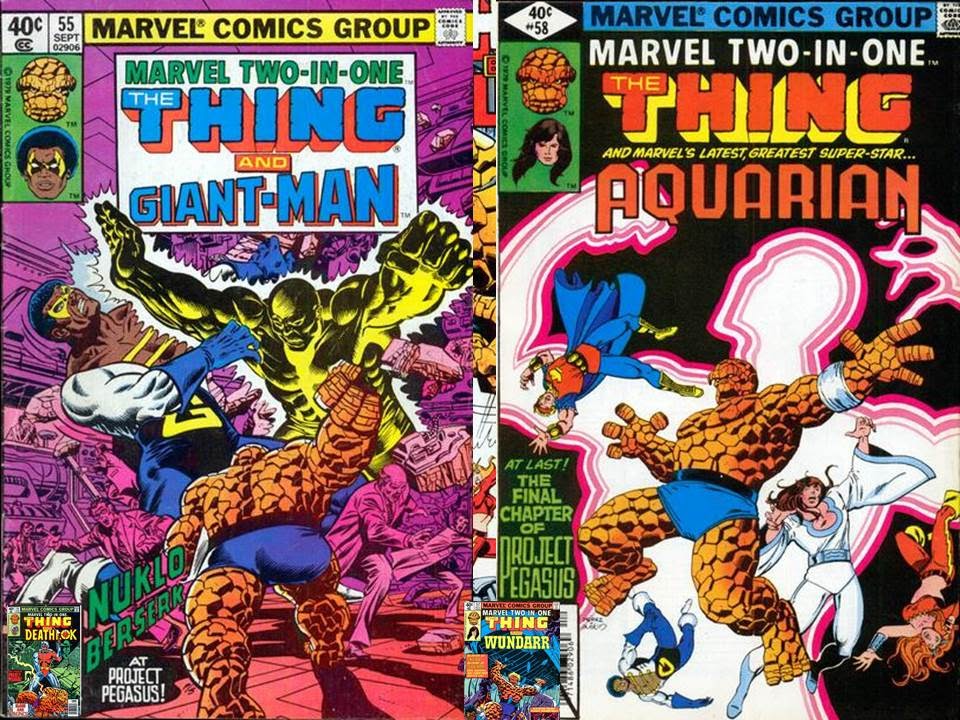 ...as Bill Foster took on the name of Giant-Man as he joined Project:P.E.G.A,S.U.S. (Bill Foster brought the body of Atom-Smasher to the facility in Marvel Two-In-One #54 of August, 1979 where he was greeted by the Thing and Quasar (formerly Marvel Man, now the head of security at this research facility; and Bill had to reveal his identity of Black Goliath to Ben in Marvel Two-In-One #55 in September, 1979).  Quite a bit more happened at Project:P.E.G.A,S.U.S., and it involved the amazonian Thundra, cybernetic Deathlok and alien Wundarr and even the Cosmic Cube as well, as the saga rolled on until Marvel Two-In-One #58 (December, 1979). 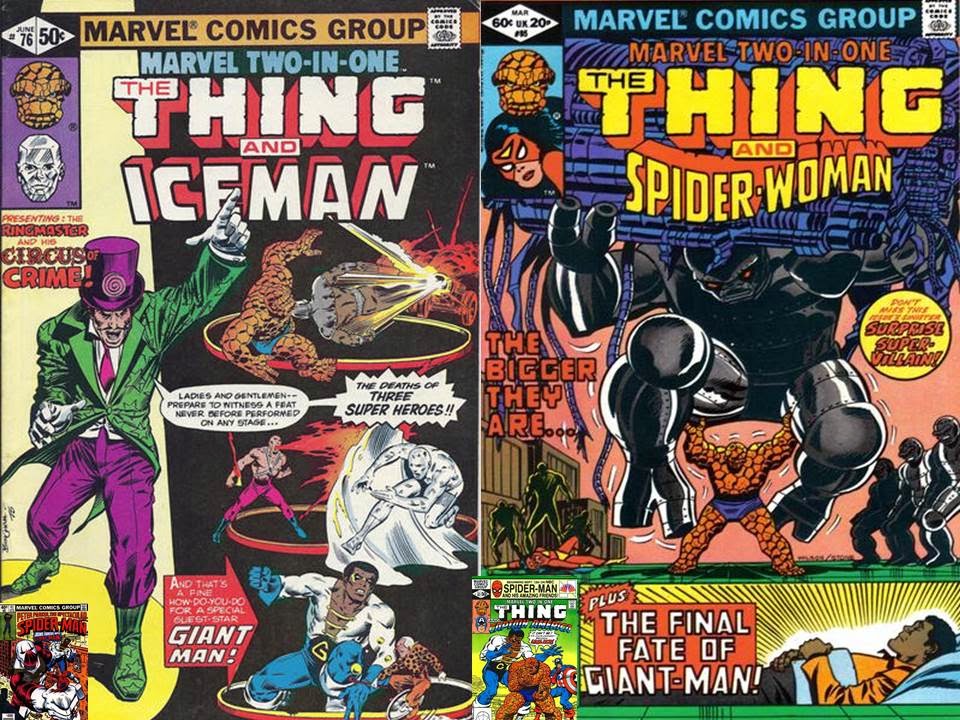 Eventually, Bill Foster revealed that he got a fatal dose of radiation from Atom-Smasher, and with the help of his friends, including the Thing, Iceman, Captain America and Spider-Woman, got treated for the problem....

...and continued to appear here and there across the Marvel Universe (more as Bill Foster), but eventually returning as Giant-Man (where he faced off against Ant-Man foe, Dr. Nemesis in Marvel Comics Presents #113-118 in 1992). 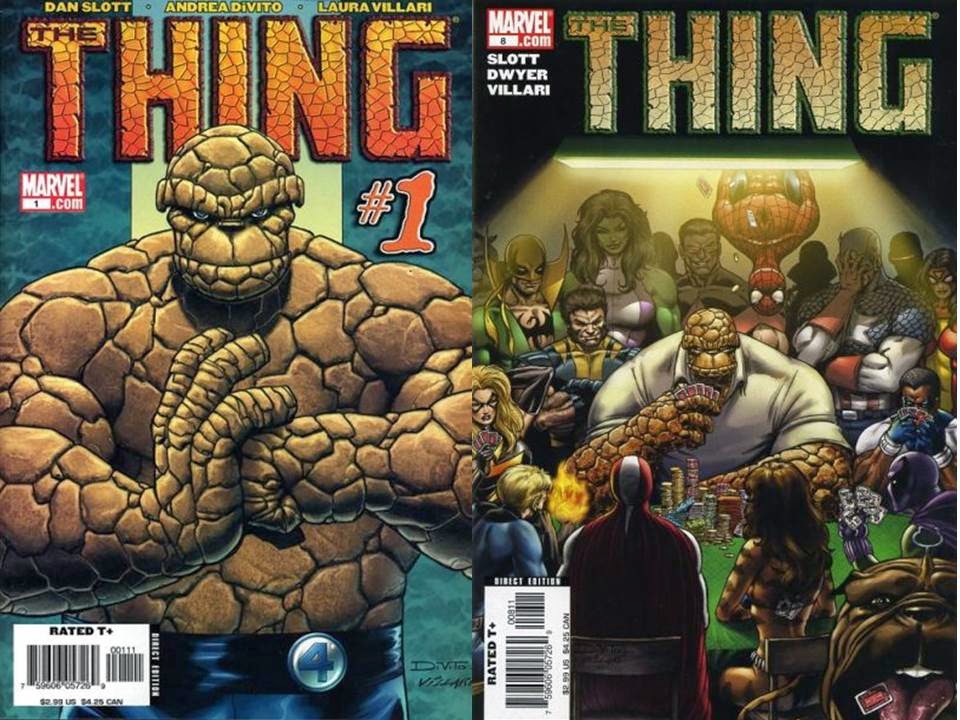 But, Bill Foster had a chance encounter with the Thing (in Thing #1, January, 2006), and had become Goliath again, even making the cover of the last issue (Thing #8 of September, 2006).

Sadly, Bill Foster should have stayed in retirement, as his return coincided with the Marvel series, Civil War, which put heroes against heroes, with some of them, like Goliath (who had sided with Captain America against Iron Man), not making it out of the series alive. 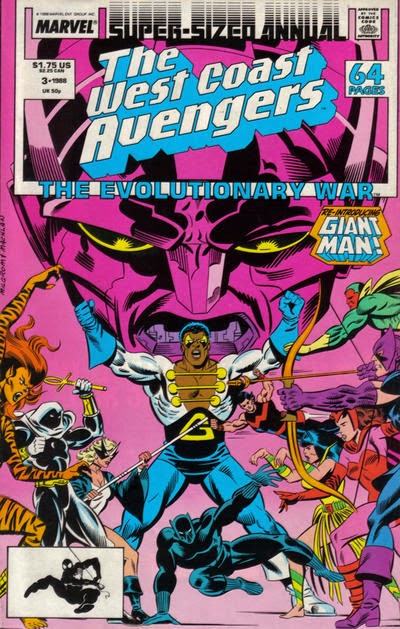 (The poor guy couldn't even make a cover of the main series!).

Still, we can only hope that some day, Bill Foster will return (he did, as shown in this cover with popular Avengers like Tigra, Moon Knight, Mockingbird, Vision, Scarlet Witch, Hawkeye, Mantis and Black Panther, from West Coast Avengers Annual #3 of 1988!) and that maybe Marvel would collect the original Black Goliath #1-5 (maybe along with the Ant-Man feature of Marvel Feature #4-10 of 1972?