Showcase on Hourman and Dr. Fate 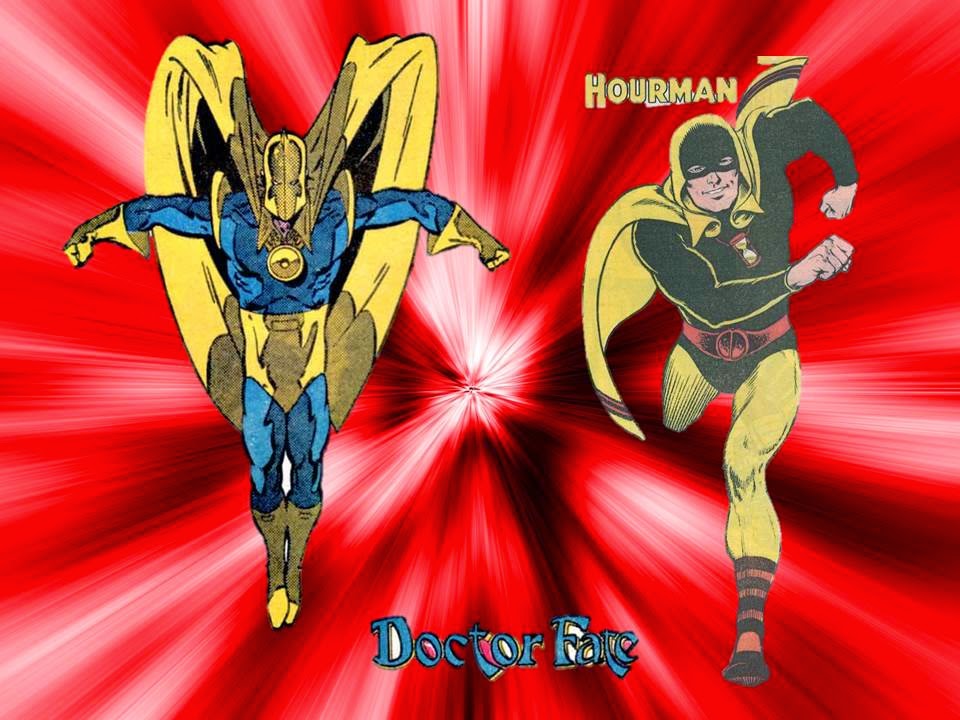 The Justice Society was proving quite popular at DC in the 1960s, and they were looking to expand on that premise.

Two of the JSAers who hadn't been revived before the re-introduction of the JSA in Flash #137 (and thus didn't have Silver Age counterparts) were Dr. Fate and Hourman.  Their Golden age history was notated here, but....they had a little early Silver Age spotlight of their own in two issues of Showcase! 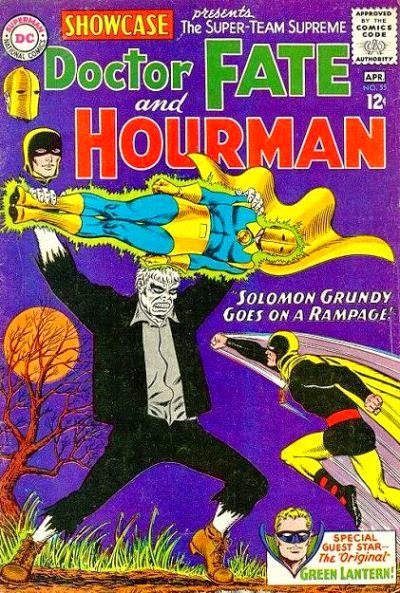 Showcase #55 (March-April, 1965) was the first of the magician and the man of the hour teaming up (and more or less without the JSA since More Fun Comics #98 (July-August, 1944) for Dr. Fate, and Adventure Comics #83 (February, 1943) for Hourman...though the Golden Age Green Lantern also guested in this tale (as well he should, as the duo faced GL's Golden Age foe, the swamp-monster Solomon Grundy, in his first Silver Age appearance).  This issue by writer Gardner Fox and artist Murphy Anderson also features Dr. Fate's long time companion, Inza Nelson (formerly Cramer, Inza must have married Kent Nelson, a.k.a. Dr. Fate between his last Golden Age appearance and this issue!).  Solomon Grundy also returned from a trap on the moon, which he had already escaped...but, this was explained in the early issues of All-Star Squadron), and the swamp man was defeated with spells and hour long strength. 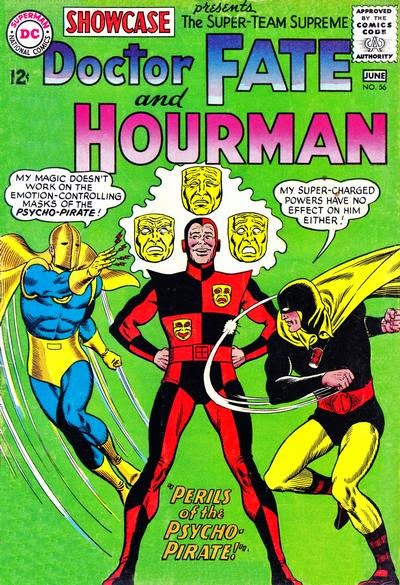 Showcase #56 (May-June, 1965) did have the man of Miraclo and the helmeted magician, this time against a new menace (though, like Flash, Atom and others, inspired by an old one).  Roger Hayden, a cellmate of Charley Halstead, took over his criminal identity of the Psycho Pirate, as well as using the Medusa Mask to get the power to manipulate emotions.

Psycho Pirate shows up again, facing the Spectre in Spectre #5 (July-August, 1968), and the JSA as a whole in All-Star Comics #66-68 (1977), and returning as Hourman's representative foe in the Secret Society of Super-Villians in Justice League of America #195-197 (1981) (continuing into All-Star Squadron #26 and Annual #2 of 1983), before working for the Anti-Monitor during the Crisis on Infinite Earths...and later battling the heirs to the JSA, Infinity Inc. (including Hourman's son, the second Hourman - Rick Tyler).  Wendi Harris (the original Hourman's actress fiancee) was also a part of this issue. 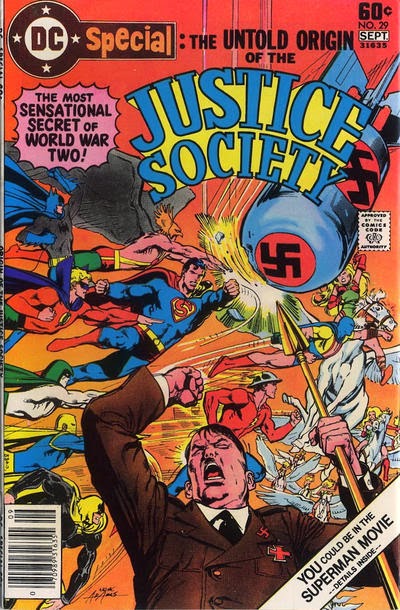 Hourman and Dr. Fate first met in DC Special #29 (August-September, 1977 by Paul Levitz and Joe Staton), when Dr. Fate realized that Batman, Flash and Green Lantern were not having success against Hitler and his forces.

No reason was given why the magic-based Dr. Fate picked the scientific Hourman...

...but this piece of retroactive continuity (telling a story set in the past to explain later events) seemed this formed a friendship between the two that lasted over decades... 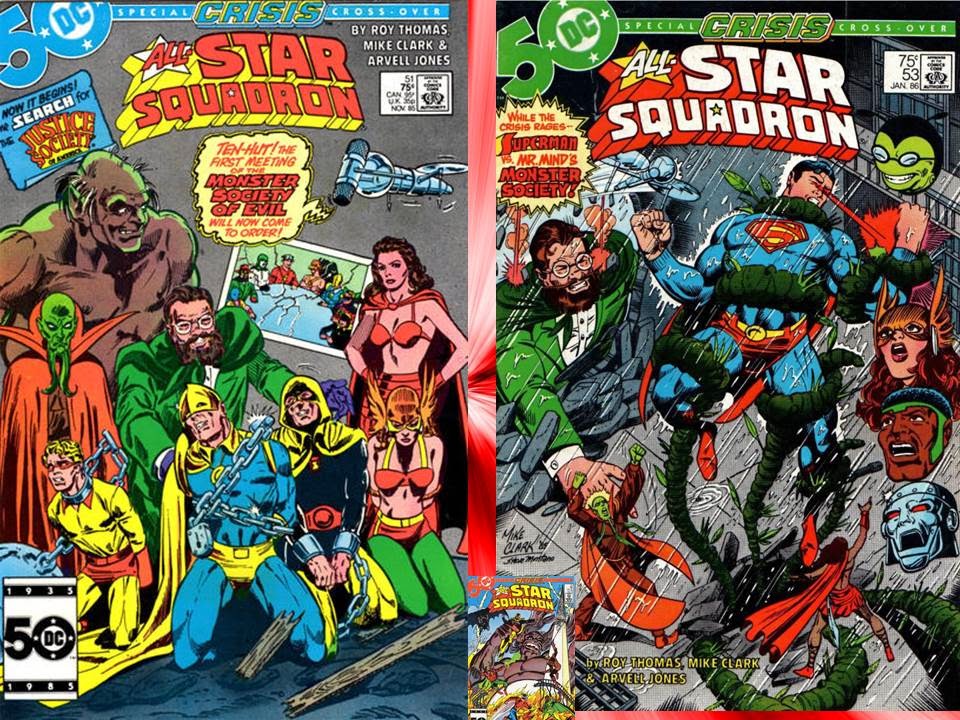 ...including All-Star Squadron #51-54 (of 1985/1986 by writer Roy Thomas and artists Mike Clark and Arvell Jones), wherein Dr. Fate, Hourman (and Sandman's partner, Sandy and Hawkman's partner, Hawkgirl) face off against the Mr. Mind's Monster Society of Evil which included Hawkman foe, priestess of the weather Nyola (from the Hawkman tale of All-Star Comics #2 of Fall, 1940), Sandman foe, plant manipulating Ramulus (formerly known as Nightshade when he first appeared in ), Dr. Fate foe, master of Solution Z Mr. Who (from More Fun Comics #73, #74 and #79 before this appearance, and after in More Fun Comics #91 and Infinite Crisis #7), and Spectre foe, Oom (from All-Star Comics #3, the Spectre tale of the first meeting of the JSA).  Since Spectre later borrowed Hourman's foe, Psycho Pirate for an issue, it only seems fair, as this tale set in 1942 has Hourman facing an old foe of Spectre's!  These four heroes were looking for the missing JSA (missing because of events of the Crisis On Infinite Earths, and how they related to it in 1942, and detailed in All-Star Squadron #50 of October, 1985, and related to the original All-Star Comics #13 Justice Society adventure cover dated October-November, 1942); and at the end, Monster Society also included the foe of the western Vigilante, the Dummy as well.  It also set things up for Mr. Mind to eventually reform the Monster Society of Evil and face the foe he was known for facing, Captain Marvel.

All this just goes to show how interrelated comic characters can get over time....it's like magic!

Just for completeness sake, here's the cover's of the premiere of the Earth-2 members of the Monster Society of Evil (though they aren't on the original covers...).

Nyola and Oom from All-Star Comics #2 and #3.  Nyola created by Gardner Fox and Sheldon Moldoff; Oom created by Jerry Siegel and Bernard Baily 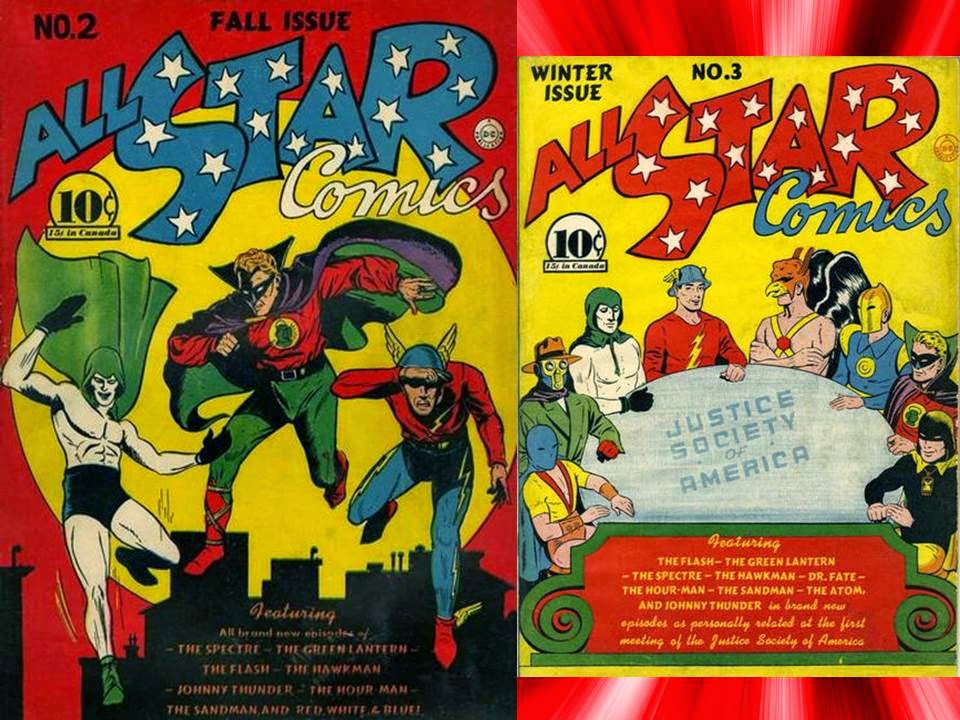 Ramulus (originally known as Nightshade, but DC was getting Nightshade, a character from Charlton Comics, and his original tale of World's Finest Comics #6 was reprinted in Wanted #9), and was created by Jack Kirby 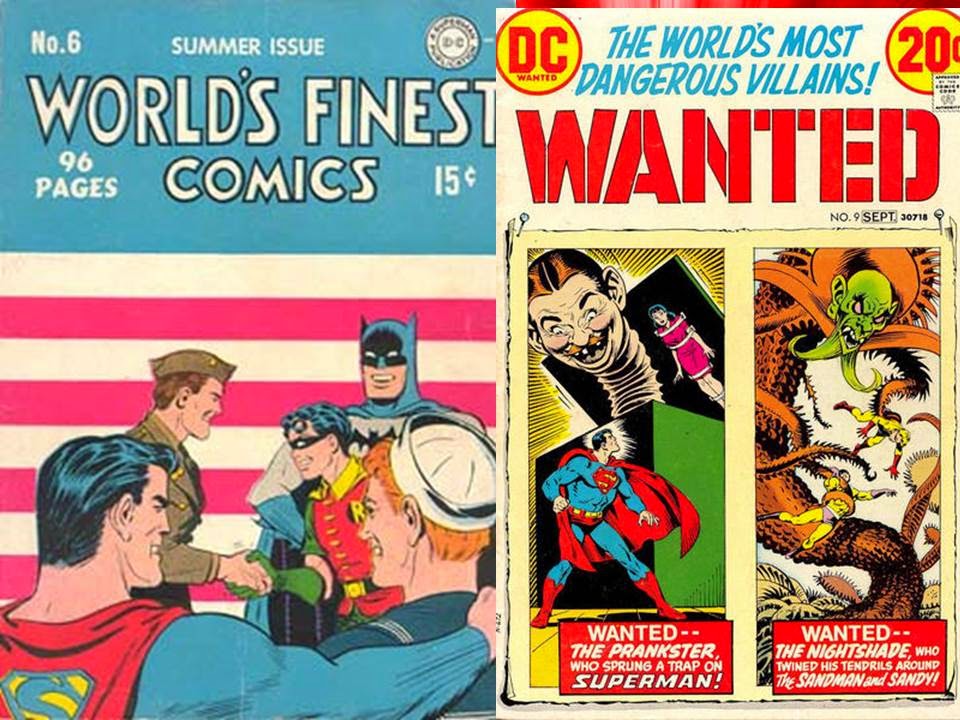 Mr. Who (his first tale of More Fun Comics #73 was reprinted in Wanted #8, and all his tales vs. Dr. Fate are in the Golden Age Dr. Fate Archives) and was created by Gardner Fox and Howard Sherman; Mister Who's Solution Z allowed him to change size, become invisible and intangible and adapt to any danger. 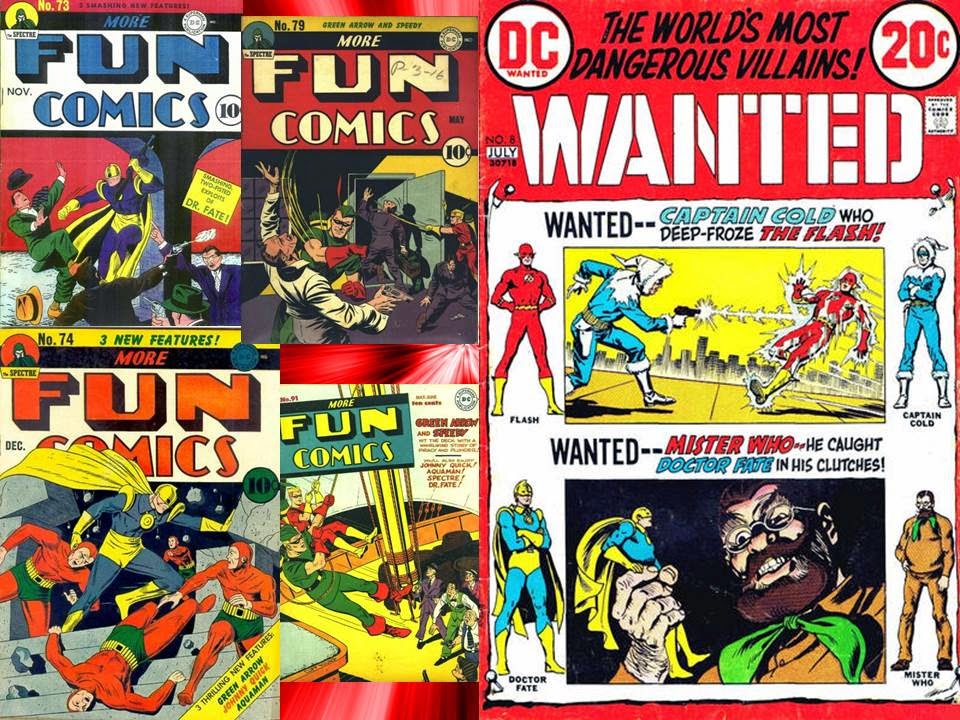