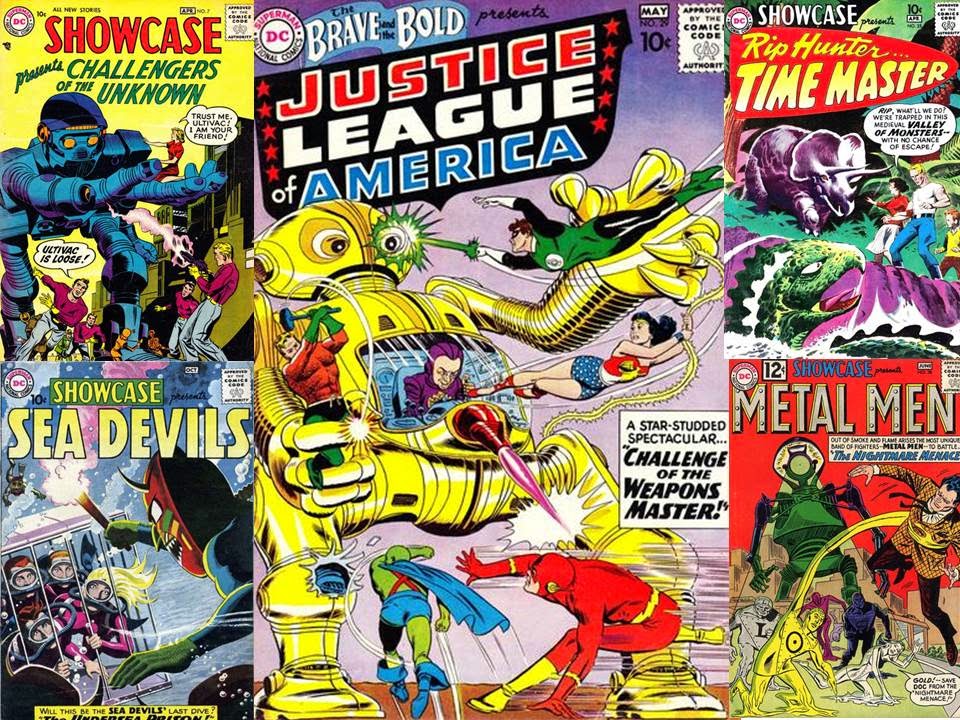 The mid-1960s was a time of change at DC Comics!  Showcase was featuring more teams of adventurers (like the Challengers of the Unknown and the Sea Devils) and even robots (the Metal Men), and while Brave and the Bold dabbled in that, uniting various DC solo stars (including Flash and Green Lantern who got their start in Showcase) in the Justice League of America, Brave and the Bold went one step further with its 50th issue and started to team-up even more members of the DC Universe!  Picking up where we left off... 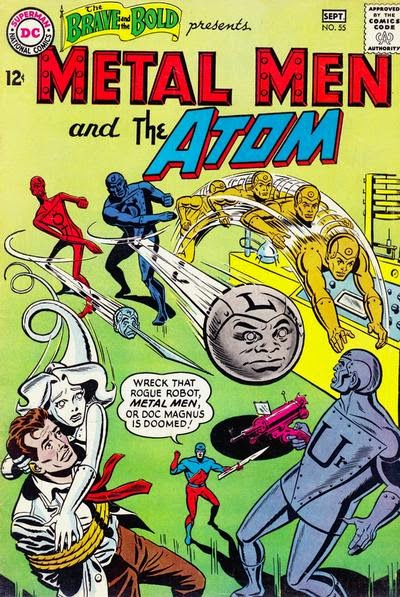 The Atom was the first return star (and the mighty mite also got a rebirth in Showcase, leading to his own title and a membership in the Justice League), and he came back to meet Doc Will Magnus’ robots…the mighty Metal Men (Gold, Iron, Lead, Mercury, Tin and Platinum aka Tina!).  With Brave & the Bold #55 (August-September 1964, by Bob Haney and Ramona Fradon) the links in the DC Universe just grew, and we learned of Doc Magnus’ first robot, Uranium (and the robot that it created, Agantha…who was the element Silver) in the “Revenge of the Robot Reject”.  Battling menaces that Doc Magnus created just seemed to be something the Metal Men did, but this time, the Atom was a part of the mix…and both Atom and the Metal Men would return for one more non-Batman team-up, as well as many team-ups with Batman (in fact, they both even returned for team-ups with Batman and Green Arrow, a distinction they share only with the heroes Green Lantern, Robin and Black Canary!).

Return of the Scarlet Speedster and Manhunter from Mars 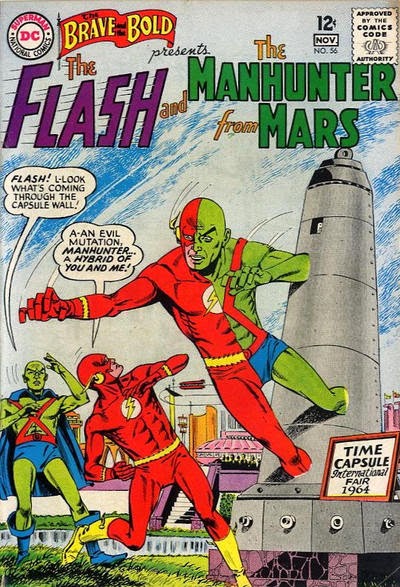 With Brave & the Bold #56 (October-November 1964, by Haney and Bernard Baily), it’s the first return for two stars (but neither had teamed with each other in B&B).  Flash and the Martian Manhunter had both been growing in popularity (with J’onn J’onnz moving from the back of Detective Comics to a lead feature in House of Mystery at this point), and these two faced the “Raid of the Mutant Marauders”.  It was actually a mutant android, who had the ability to become a morphed version of heroes (like half-Batman, half-Green Arrow; half-Aquaman, half-Hawkman, and even half-Martian Manhunter and half-Flash…and, he gets a little extra coverage as Batman and Green Arrow ended up being one of B&Bs most popular team-ups, foreshadowed here) who was exiled to Earth by Queen Tatania because he fell in love with her.  And the two heroes weren’t even totally responsible for its defeat…they pulled in Hawkgirl!  Irony abounds here…because of all the members of the JLA (up to and including Firestorm) only Hawkgirl and Martian Manhunter never shared a cover billing with Batman!  This, along with B&B’s first Batman/Green Lantern team-up in #59 ends where the Brave and the Bold Team-Up Archives…but not the end of the story!

The Element of Change 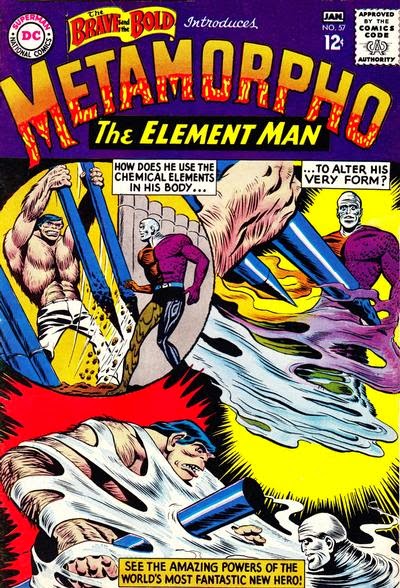 Change was in the air…for Brave and the Bold and for its format (at least for a bit); starting with Brave & the Bold #55, George Kashdan was the solo editor of the book (having shared that title with Murray Boltinoff through issue #54), and for Brave and the Bold #57 (December 1964-January 1965) and Brave & the Bold #58 (February-March 1965), the book had a solo star whom George Kashdan came up with the basic idea of…that of Metamorpho, the Element Man! 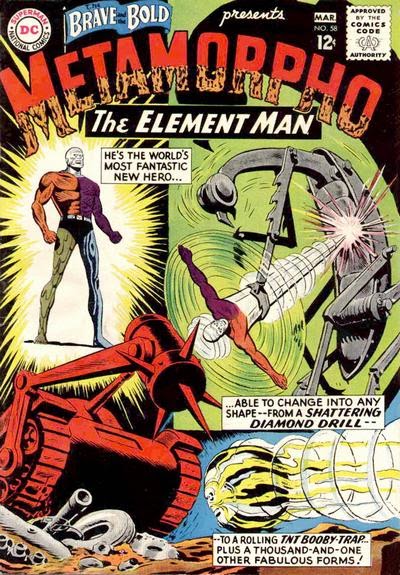 From John Wells‘ American Comic Book Chronicles 1960-1964 - “Working from Kashdan’s formative concept, Haney named the character and wrote the script for the origin.  In the process, he developed one of the 1960′s most sharply-defined superhero casts: sarcastic adventurer Rex Mason, transformed by the mysterious Orb of Ra into Metamorpho; his wealthy blonde girlfriend Sapphire Stagg, torn between her love for Rex and her devotion to her daddy; scheming magnate Simon Stagg, whose lust for power was equaled by his desire to prevent Mason from marrying into his empire; and Java, a resurrected caveman who gleefully joined in Simon’s plots while secretly coveting Sapphire for himself”.  Kashdan and Haney brought Ramona Fradon out of maternity leave to illustrate the adventures…who graduated to a 17 issue series of his own…as well as coming back to Brave and the Bold frequently…and even being a founder of Batman’s own super-team, the Outsiders!  Sadly, these two issues have only been reprinted in black & white recently in Showcase Presents: Metamorpho, but #57 was in Super-DC Giant S-16 (1970) and #58 was in World’s Finest Comics #228 (March 1975).  Brave & the Bold #59 (April-May 1965) was also by Haney and Fradon, and introduced the Time Commander (but more on this when covering the Batman team-ups of Brave & the Bold).

The Kids Are Alright 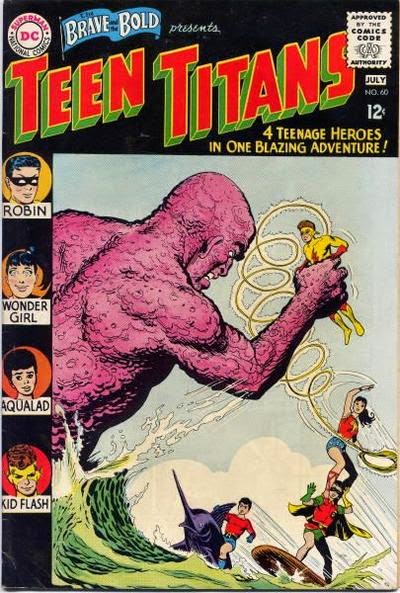 Brave & the Bold #60 (June-July 1965) also gets a quick mention, as it was technically a solo feature, introducing the Teen Titans in a story by Bob Haney, with art by Bruno Premiani…and a cover by Nick Cardy with the kids facing the menace of the Separated Man!  This idea was capitalizing on the success of B&B #54, where the sidekicks originally met, and this made a more formal team of them, adding Wonder Girl to mix (more on that here...).  The Teen Titans came back to team with Batman four times over the history of the Brave & the Bold, as well as one team-up with Superman in World’s Finest Comics and 43 issues in their original run…and then a run from #44-53 in the 1970s, and the wild success of Wolfman and Perez‘s New Teen Titans starting in the 1980s.

This story was reprinted in the Silver Age Teen Titans Archive #1 and in Showcase Presents: Teen Titans #1.

Back To The Past 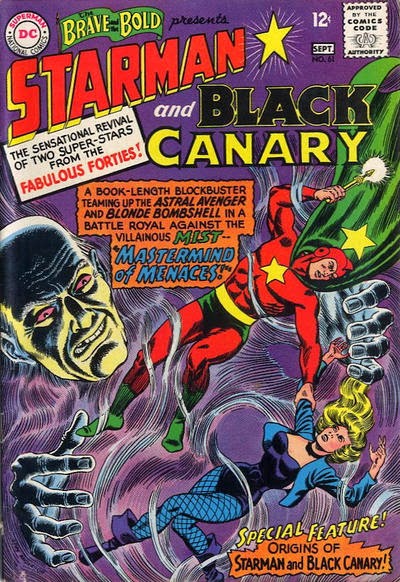 The DC Universe was growing by leaps and bounds in the mid-1960s…and helped along by the reintroduction of the original DC super-team…the Justice Society of America!  Brave & the Bold #61 and #62 (August-September and October-November 1965) cashed in on that phenomenon with a team-up of Starman (Ted Knight) and the Black Canary (Dinah Drake Lance)!  Golden Age characters like Flash, Green Lantern and Atom were reinvented in Showcase, and Hawkman modernized in Brave & the Bold, as was the idea of the Justice Society, becoming the Justice League.  Flash #123 (September 1961) brought back the original Flash, and then with Flash #137 (June 1963), the whole Justice Society was acknowledged as living on Earth-2 (a separate world away from the current heroes, but one they could interact with).  In Showcase #55 & #56 (March-April and May-June 1965), Gardner Fox and Murphy Anderson had two issues featuring Dr. Fate and Hourman (two heroes who didn’t have modern counterparts) and with B&B #61 and #62, had Starman and Black Canary (with stunning art by Murphy Anderson on both issues).  The first issue had the pair fight Starman’s old foe, the Mist, and the second put them up against original Green Lantern foe, the Sportsmaster, and Wildcat foe, the Huntress. 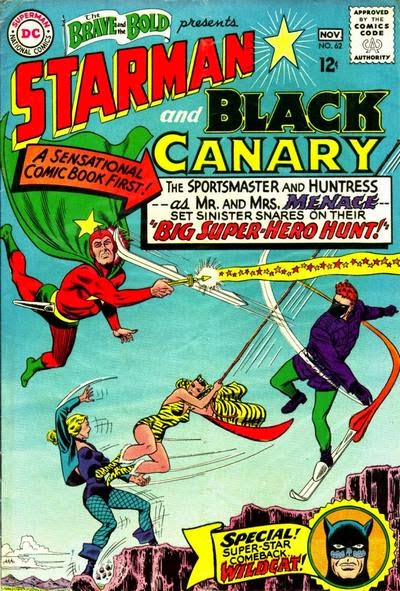 This was even the first Silver Age appearance of Wildcat (who would be no stranger to Brave & the Bold….but, it ended up being the Earth-1 Wildcat teaming up with Batman, in a kind of accidental creation…one of those little details that Bob Haney occasionally overlooked in his zeal to tell great stories, not unlike the creation of a modern day Wonder Girl).  For more on the 1960s appearances of the Justice Society of America, check out Alter Ego #94, which also has part of a great interview with George Kashdan by Jim Amash that gives more details on this era including on Metamorpho, and for reprints of these tales, B&B #61 is in Crisis on Multiple Earths: Team-Ups #1, B&B #62 is in Crisis on Multiple Earths:Team-Ups #2, and both are in the Black Canary Archives #1. 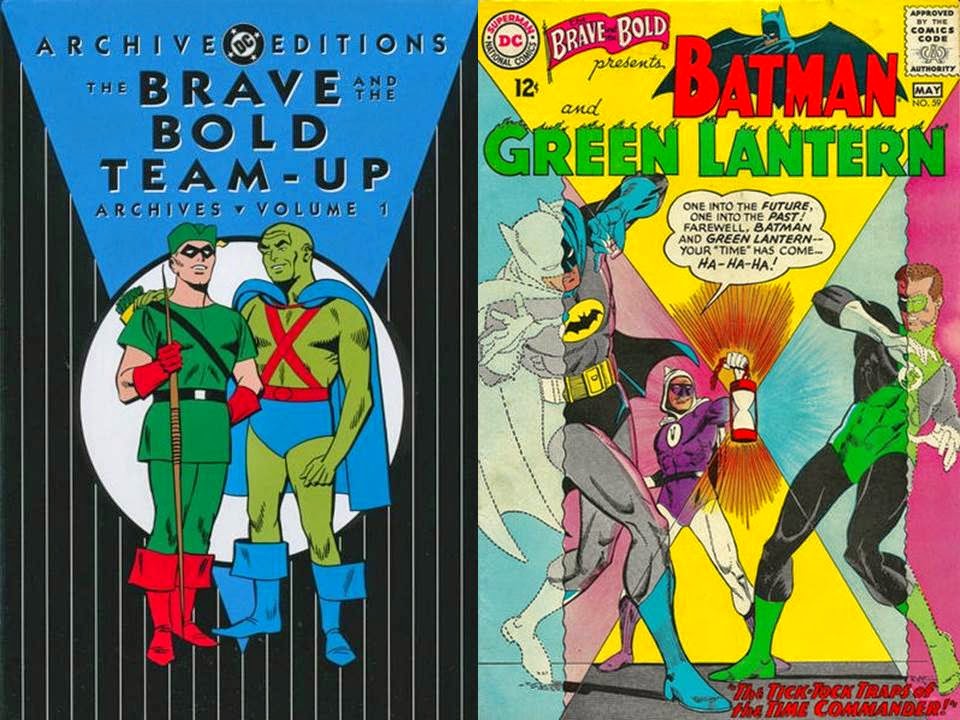 That’s all the space left for now, but there are still some non-Batman B&B adventures to cover, and they even involve most of the people here with a few new surprises…so, come back soon and they’ll be here.