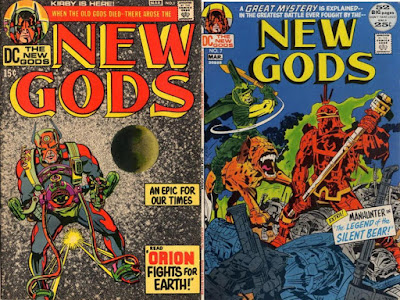 New Gods #1 came out in February-March, 1971, introducing the world to the main concepts of Jack Kirby's Fourth World as "Orion Fights For Earth" (by writer/artist Jack Kirby, and inked by Vince Colletta) .  This was the first appearance of Orion, the dog of war, who uses the astro-force to fight the forces of Apokolips (like Kalibak, Darkseid's brutal son), working for Highfather (Izaya, who is connected to the mysterious "Source"), working with jovial Lightray (a young New God of New Genesis), and using Mother Boxes made by Metron....

...but, the beginning of the battle started before New Gods #1. 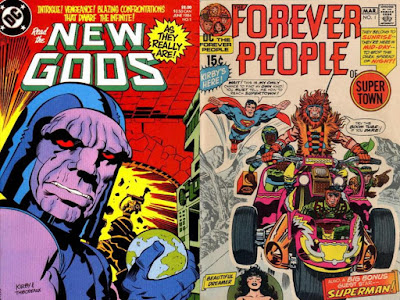 Leader of the forces of Apokolips, Darkseid had already appeared in Superman's Pal, Jimmy Olsen #134 to #136 (also by Jack Kirby, from 1970/1971), and in Forever People #1 (February-March, 1971, by Kirby/Colletta), where he was the force behind Inter-Gang, a new group of gangsters that used futuristic weapons, and were fought by Jimmy Olsen, Superman, a new Newsboy Legion and the Forever People (a group of kids who came to Earth, but were from New Genesis).

But, this didn't tell where the war between New Genesis and Apokolips started, nor why it moved to Earth... 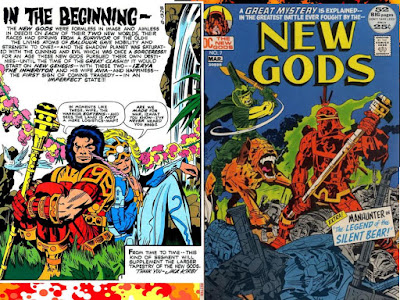 The start of the war was revealed in "The Pact" in New Gods #7 (February-March, 1972 by Jack Kirby and Mike Royer).  Izaya the Inheritor was enjoying the peace on New Genesis with his wife, Avia, when their picnic was set upon by Steppenwolf of the Dog Cavalry and his nephew, Darkseid, and attacked, resulting in the death of Avia by Steppenwolf's hands.  Darkseid promised his uncle he killed Izaya, but he lied, allowing Izaya to lead New Genesis' forces against Apokolips, and kill Steppenwolf, which allowed him to take over Apokolips from his mother, Heggra, and give enigmatic Metron the "X-Element", which would allow him to travel anywhere in the galaxy in his Mobius Chair. 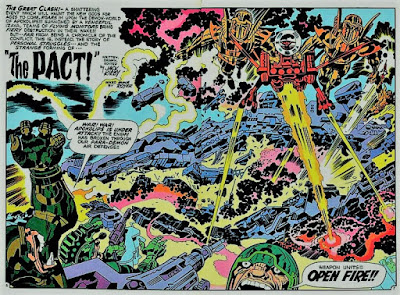 After killing Steppenwolf, and the terrible aftermath of the many battles, Izaya tired of fighting, and went to find himself, instead connecting with the all-powerful "Source", becoming the Highfather of New Genesis.  Darkseid, meanwhile, came up with "The Pact", where he and Izaya would exchange sons (with Darkseid angering his wife, Tigra) as they gave up their angry red-haired boy to Highfather, and Darkseid accepted Izaya's heir, giving him to Granny Goodness for soldier training.  Darkseid schemed, planning on angering the lad so much that he'd escape eventually, breaking the Pact, allowing Darkseid to attack (which eventually happened). 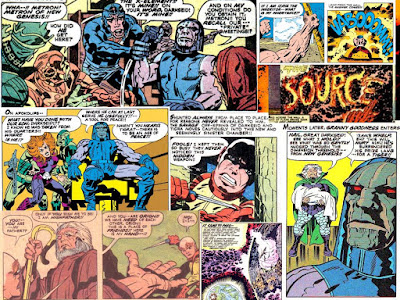 But, Darkseid didn't count on his own son, Orion, becoming such a loyal fighter for the forces of New Genesis, destined to face his father in a final battle, nor on what Izaya's boy would do after escaping to Earth (but, his story developed elsewhere, and will be revealed "soon"....).
Posted by Dave's Not Here Comic Blog at 4:36 AM