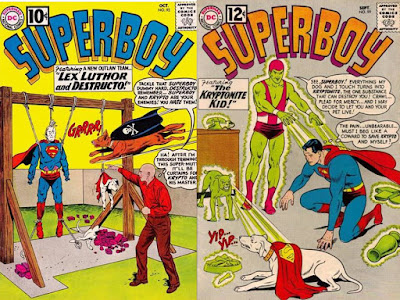 Superboy lucked out and got himself a good dog with his buddy, Krypto, who premiered in Adventure Comics #210 (March ,1955 by Otto Binder, Curt Swan and Sy Barry).  Krypto was a superdog, and battled evil along with his master....but, as Superboy had foes of his own, so, too, did Krypto develop his own little four-legged rogue's gallery.

Here's a couple of the evil pets that arrived to menace the Dog of Steel! 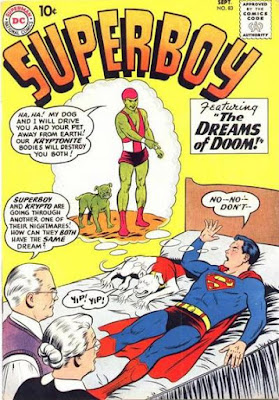 Superboy was weakened by Kryptonite...so he would have no more dangerous foe that a kid who could turn ordinary objects into Kryptonite...like the Kryptonite Kid!  The Kryptonite Kid premiered in Superboy #83 (September, 1960,  by Jerry Siegel and George Papp) with "The Dreams Of Doom", where Superboy and Krypto had dreams of a Kryptonite Kid and his dog, causing trouble for the duo....and then appearing in reality to really cause trouble!  The Kryptonite Kid had been a criminal sent into space as part of an experiment, and he and his dog were exposed to a cloud of Kryptonite, changing them into beings which could change other things into Kryptonite.  The Kid wanted to settle on Earth, and thus Superboy and Krypto had to go.  Things looked bleak for the Boy and Dog of Steel....until a young Mr. Mxyzpltk showed up and banished the Kryptonite duo to the 5th Dimension for a time (which also changed all the items back from Kryptonite), saving the Smallville super-hero and his best friend.  Why would his enemy save him?  Because....if Superboy and Krypto died, who would Mr. Mzyzpltk torment? 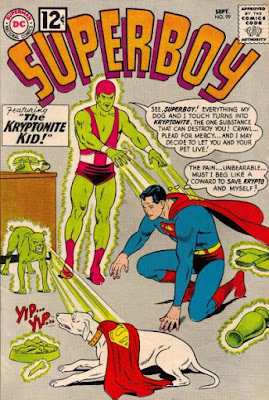 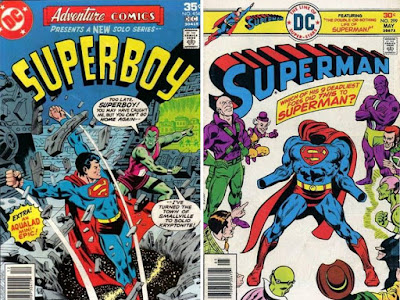 The Kryptonite Dog never returned, but the Kryptonite Kid did, appearing in Adventure Comics #454 (November-December, 1977) and later, grown up, to menace Superman, in Superman #299 (May, 1976), and both of those times, Lex Luthor was present.... 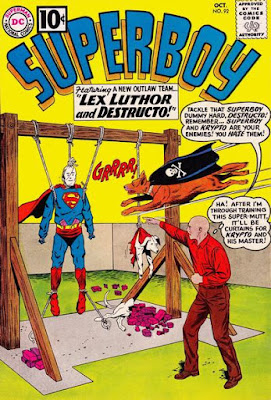 Luthor is Superboy's greatest menace, but, he's only human, and would have a pet of his own.  Destructo premiered in Superboy #92 (October, 1961 by Otto Binder and George Papp, and a cover by Curt Swan and Stan Kaye) as "Krypto's Arch Enemy".  Luthor made a machine to give himself super-powers, but his dog got in front of it instead.  Luthor, ever the schemer, made his dog look like Krypto, and sent him to cause mischief, getting Krypto blamed, causing the Dog of Steel trouble in Smallville.   Krypto brings the police to Luthor's hideout, where they figure out the truth, but not before Luthor is able to remove Krypto's powers via the machine...which forces Krypto to be smart, using Kryptonite against Destructo, until Luthor returns Krypto's powers.  Then, Superboy returns from a mission in space, and uses the machine to remove Destructo's powers, and takes Luthor off to reform school (which also seemed to make Luthor abandon pets, as Destructo never appeared again...). 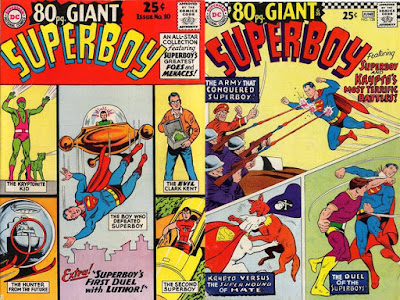