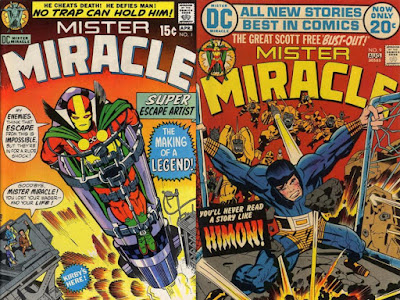 It was quite a show back in the early 1970s when Jack Kirby came back to DC Comics, and no show was bigger than the performance put on in Mr. Miracle!  Scott Free made his first appearance in Mr. Miracle #1 (March-April, 1971).  Scott showed up on the outskirts of Metropolis to watch Thaddeus Brown and Oberon going through training for Thaddeus' Mr. Miracle escape act, except they were set upon by Inter-Gang thugs under orders from Steel Hand. 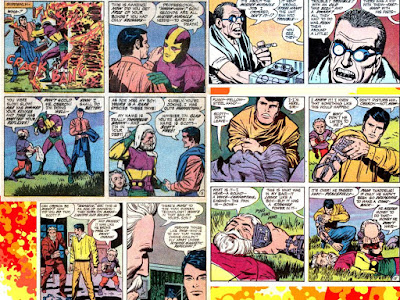 Scott used miraculous technology to defeat the foes, and became Thaddeus' protege for a time, until another attack finished him off, prompting Scott to take up the mantle of Mr. Miracle to catch Steel Hand, and then, to continue the escape artist act with Oberon, as the show must go on!

Still, where did this mysterious Scott Free and his technology come from? 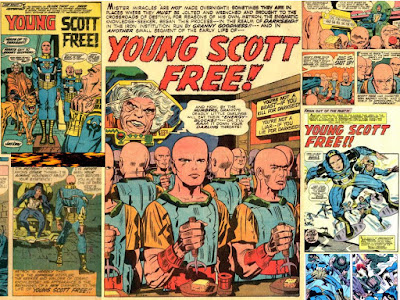 In the course of a few flashbacks of "Young Scott Free" (included in issues #5, #6 and #7 of Mr. Miracle of 1971/1972), readers followed the pre-Mister Miracle as he deals with the abuse of Granny Goodness in shock trooper training, first encounters Metron, who warns Scott not to eat the food provided (which has mind-numbing agents) and trains on aero-discs against Parademons...
...all part of the mundane existence of a minor soldier (and hinting that all this technology that Mr. Miracle uses is from Apokolips).

So, why is Scott Free so important? 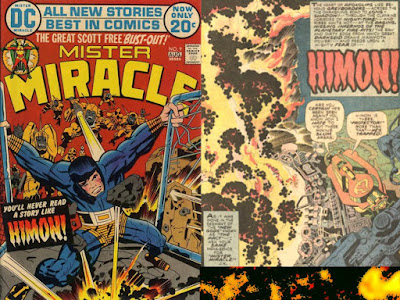 In Mr. Miracle #9 (July-August. 1972), Jack Kirby finally gives us answers, as well as "Himon!".  In the last of the "Young Scott Free" tales (this one taking up the full issue), readers meet Himon, who sees a group of "lowlies" in Armagetto die for him, and counts on Scott Free to save him from accidentally phasing into a wall. 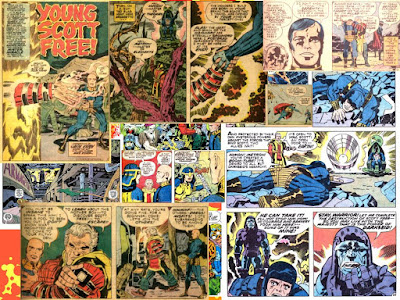 Himon is the inventor of the Mother Box, and is creating rebellion amongst the lowest ranks of Apokolips, which gets him hunted by Darkseid's forces, including a young lieutenant Barda of the Female Furies (who grows up to be Big Barda, and later lead the Females Furies against Mr. Miracle, then defecting for him).  While Metron and Himon discuss if Scott Free has the strength to escape Apokolips himself, Darkseid troops kill all of Scott and Barda's friends, and Himon kills Scott and Barda's tormentor, helping Scott remember a woman who knew Izaya (a memory from his own youth on New Genesis... 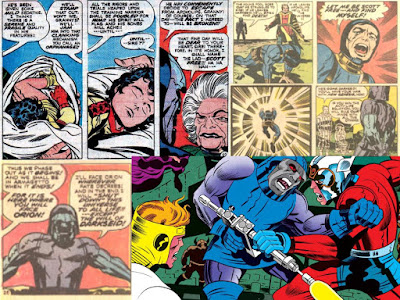 ....yes, Scott was Izaya's son, traded in "The Pact").  This forces Scott and Barda to dream beyond Apokolips, and try to escape, though Barda is held back by dog soldiers and Parademons, Scott presses on, straining to leave via a "Boom Tube" Metron and Himon created, while Darkseid himself appears, beckoning the lad to stay and bow to his will, yet the boy declares "let me be Scott Free...and find myself!", and escapes. 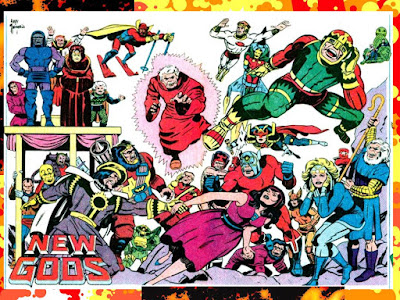 This breaks the Pact, allowing Darkseid to restart the war with Apokolips, as well as to try to find the "anti-life equation" which will allow no other will in the universe other than Darkseid's...while Himon and Metron warn Darkseid of the prophecy that he will face Orion one day in Armagetto...

...as well as showing how connected Kirby's Fourth World was simply with two flashback based issues!
Posted by Dave's Not Here Comic Blog at 5:03 AM