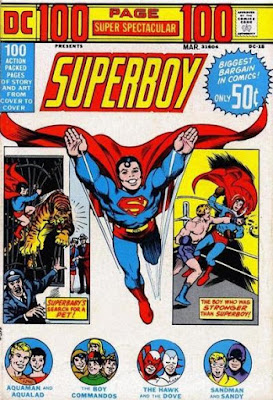 Superboy was a star of more than one DC Super Spectacular...here's a look at his first, 100 Page Super-Spectacular #DC-15 (March, 1973), edited by E. Nelson Bridwell, with a cover by Nick Cardy, featuring Superboy and a few of the friends he would make along the way.


Here's a look at the stories contained in this issue.. 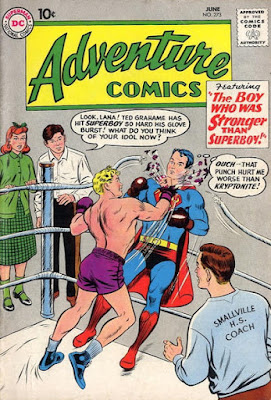 First up, Superboy has to deal with "The Boy Who Was Stronger Than Superboy" from Adventure Comics #273 (June, 1960) by Jerry Siegel and George Papp, with a cover by Curt Swan and Stan Kaye.

This story has Superboy facing off against Ted Grahame, a boy from Smallville that Superboy rescued from a climbing accident, who develops super powers stronger than Superboy's, but whose parents are taken hostage by criminals....resulting in Superboy having to help save them, and take away the risk for Ted (his super powers) for the lad's own good. 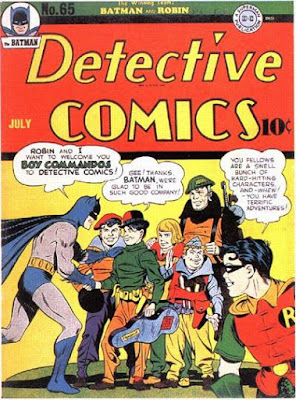 The Boy Commandos were a group of orphans (Andre Chavard, Alfy Twidgett, Jan Haasen and Brooklyn) who worked with Rip Carter (a member of the U.S. Army stationed in Great Britain) who worked together to fight the Nazi menace.  In this story, the boys were sent to school to continue their education, but found a Nazi hidden there, working as a gardner named Bathingham. 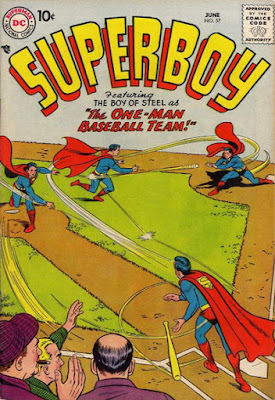 Back to a Superboy story, with "The Boy Of The Year Contest" from Superboy #57 (June, 1957) (which you'd think Superboy would win, as the cover by Curt Swan and Stan Kaye evidences being a one man baseball team) by Otto Binder and John Sikela.

The story reprinted here has Superboy being disqualified from being in the Boy of the Year contest (because the Boy of Steel cannot supply a home address, without giving away his secret identity).  So, four other boys are up for the award, but are beset by accidents, which people feel Superboy is causing.  Clark Kent defends his alter ego, ends up being nominated, and while Superboy finds the real culprit, Clark Kent wins the award! 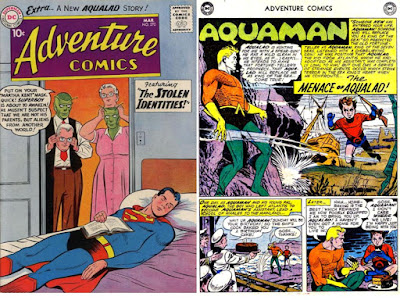 Time for another second appearance, this time that of Aqualad in the Aquaman feature from Adventure Comics #270 (March, 1960) by Robert Bernstein and Ramona Fradon, with "The Menace Of Aqualad".

Wait a minute?  Aqualad a menace?  That's what a fortune teller told Aquaman, and over the next few days, Aqualad acts odd, imperiling Aquaman.  Aquaman finally confronts his young friend about his odd behavior, which Aqualad explains as he was preparing a cave for the two of them to live in, and wanted it to be a surprise for Aquaman's birthday. 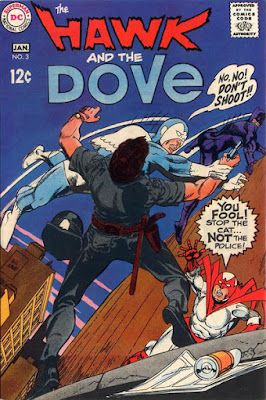 It's a pair of brotherly super-heroes as Hawk and Dove (brothers Hank and Don Hall, teenagers who got super powers from a supernatural source) feature in one of the stories from Hawk and Dove #3 (December-January, 1968/1969) with "Twice Burned" by Steve Skeates, Gil Kane and Sal Trapani.


Hawk and Dove have to hunt down criminals who beat John Kieves (Don Hall/Dove's friend Linda's father), with Hawk taking the more aggressive approach, and Dove trying to reason with Linda's brother, Mark, to stop him from taking vengeance in his own hands.  Dove does stop him, but only by resorting to violence (which he claims to abhor). 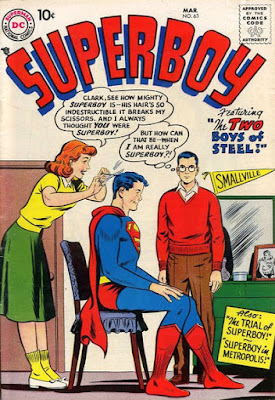 Back to Superboy and his legal troubles, with "The Trial Of Superboy" from Superboy #63 (March, 1958) by Jerry Coleman and Creig Fessel, under a cover by Curt Swan and Stan Kaye (where Lana Lang tortures poor Clark Kent).

Superboy is being sued by a man who claims his house was destroyed by a piece of the rocket the brought Superboy to Earth from Krypton hitting his dwelling and wrecking it.  They get Superboy to reenact the original flight of his rocket, and pieces do fall off, hitting a glass factory where the house had been.  But, an astronomer comes out with proof that a comet effected the trajectory, getting Superboy freed from charges (and, later, it was discovered the glass factory was really producing secret government weapons). 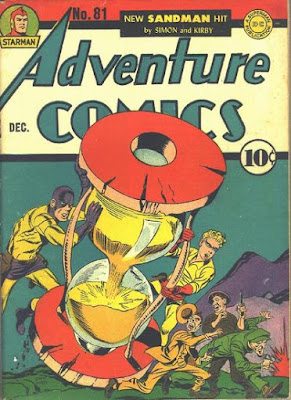 Next up, a look at "A Drama In Dreams", which is a Sandman and Sandy tale from Adventure Comics #81 (December, 1942) by Joe Simon and Jack Kirby (showcasing those yellow outfits, with it being Sandman's newer costume, as he had abandoned the gas mask a while ago....).


Sandy the Golden Boy finds his mentor, Sandman, has been replaced by an imposter, and has to go on a hunt for Wes Dodds, finding him by following the fake.  But, Sandy gets captured as well, and he and Wes work together to get free, with Wes taking over being Sandman from the phony, allowing him to defeat the criminals. 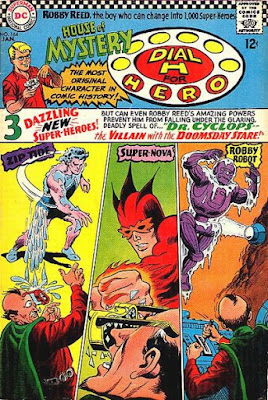 Dial up the excitement with this adventure of Robby Reed and his H-Dial from House of Mystery #164 (January, 1967) by Dave Wood and Jim Mooney, as the hero of multiple identities takes on "Dr. Cyclops - The Villain With The Doomsday Stare".


Robby ends up fighting new villain, Dr. Cyclops, and his super-spectacles, as the villain runs amuck in Zenith City.  Dialing an identity, Robby becomes Zip Tide to face his foe, but has to save innocent bystanders instead.  Finding the villain a second time, Robby becomes Super Nova, but fails, and re-dials to become Robby Robot, where he is finally able to end his battle with Dr. Cyclops. 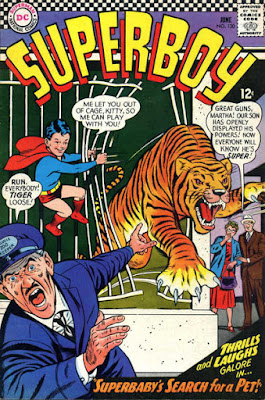 Last but not least is a tale of Superbaby (Superboy as a baby) from Superboy #130 (June, 1966) by Otto Binder and George Papp (under a Curt Swan and George Klein cover).


Superbaby, missing his canine, Krypto (that Jor-El had sent into space), goes looking for another pet in Smallville, causing chaos at the farm, a zoo and then heading out to space, where a shape-changing creature attacks the lad, who luckily defeats it, and returns to Earth, puppyless. 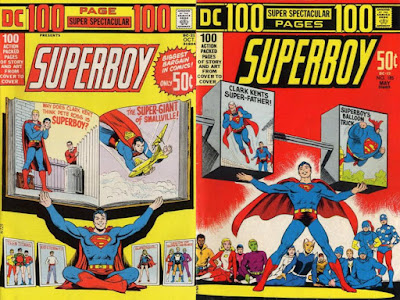 A hundred pages of fun, excitement, danger and thrills...

...just one of many (Superboy would later get another Super Spectacular full of reprints, and would have an issue of his own title feature many other stories as well....that much more to look forward to! 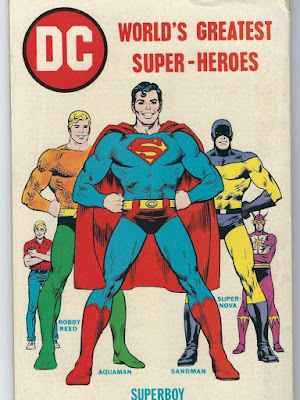 ....as well as looking back, at this beautiful back cover for this issue, by Nick Cardy.
Posted by Dave's Not Here Comic Blog at 9:03 AM