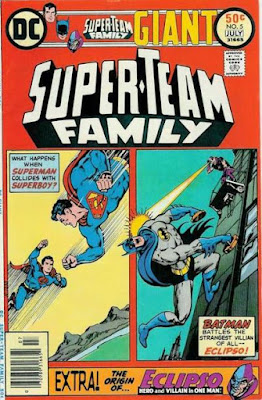 It's time for another look back at the classic title of Super-Team Family, this time, being Super-Team Family #5 (June-July, 1976), with stories featuring Superman, Superboy, Batman and Eclipso.... 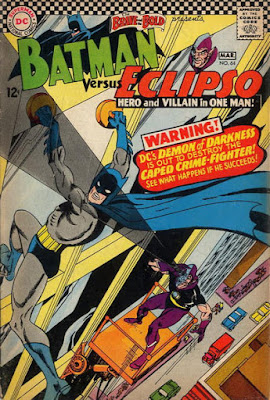 First up is the story from Brave and the Bold #64 (February-March, 1966) by Bob Haney and Win Mortimer, featuring "Batman versus Eclipso", under a stunning cover by Gil Kane.

Eclipso comes to Gotham after splitting from Bruce Gordon during an eclipse in Solar City, thanks to the Queen Bee (Marcia Monroe, who also got Batman thrown in jail, as part of a master plan to join the super-secret criminal organization, C.Y.C.L.O.P.S.), with Bruce Gordon, Mona Bennet and her father consulting with Com. James Gordon to help take down Eclipso, resulting in a battle between Eclipso and Batman on the HIVE (the building which housed the criminal organization....).

After the cancellation of Eclipso's House of Secrets series (which this original Brave & the Bold tale took place during), he next showed up in Justice League of America #109, where Batman was aware of his activities.... 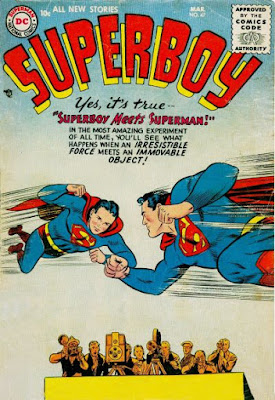 The second story reprinted in this issue is Superboy #47 (March, 1956) by Otto Binder, Curt Swan and John Giunta, where "Superboy Meets Superman", with a original cover by Curt Swan and Stan Kaye.

Superboy had the idea of going back in time to find out when Metropolis was founded, but was sleepy and failed to take into account an eclipse, so he instead ended up in the future...and met himself!  Problem was, neither Superman nor Superboy could travel in time now, so they seemed to be trapped (and Lois Lane had proof that Superman was Clark Kent, so the Kryptonians were doubly doomed).  Thankfully, Superboy was there to save Superman's secret....and then the two super-heroes put their head together (in a style suggested by the cover, as an irresistible force and an immovable object couldn't exist at the same time (and it worked, hurling Superboy back to his own time in Smallville, where he fell asleep after the effort, then awoke to wonder if it was all a dream....

Posted by Dave's Not Here Comic Blog at 4:23 AM