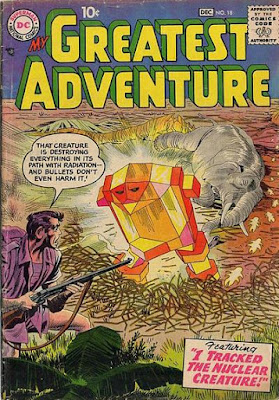 Before the title was taken over by the Doom Patrol, My Greatest Adventure featured stories of high adventure and human oddities....but only one with a cover and story by Jack Kirby...My Greatest Adventure #18 (November-December, 1957), where big game hunter and scientist, Addington Johns was able to state "I Tracked The Nuclear Creature".  Johns followed it from an island where atomic tests were performed, as it headed into India, killing with its radioactivity...and found that the only thing worse than one nuclear beast...was two!

Posted by Dave's Not Here Comic Blog at 4:20 AM