Eclipso After House Of Secrets 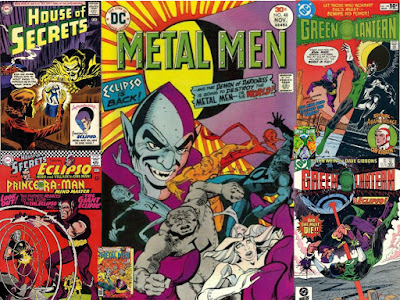 Eclipso was the main villain of House of Secrets for a time, running from House of Secrets #61 (July-August, 1963 by Bob Haney and Lee Elias) to House of Secrets #80 (September-October, 1966) as one of its main features.  Eclipso was the evil half of Solar City scientist Bruce Gordon, released when medicine man, Morphir, scratched Bruce during an eclipse with a black diamond, causing Bruce to change into Eclipso whenever there was an eclipse, first destroying Solar City and fighting with its co-creator, Prof. Simon Bennet, and his daughter, Mona (who was the love of Bruce's life). 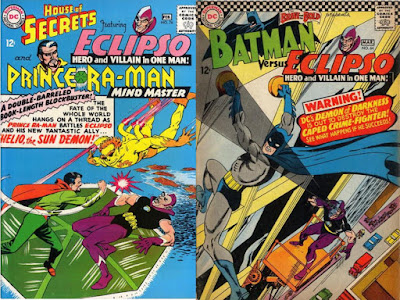 Later, any eclipse of a light source would bring on Eclipso, and Eclipso would manifest separate from Bruce Gordon, but any strong source of light would put him back into Gordon's body.

This initial run ended, with Eclipso only having faced Prince Ra-Man (his co-star hero in House of Secrets) and Batman (in an issue of Brave and the Bold).  Still, can't keep a good villain down, and Eclipso returned again.... 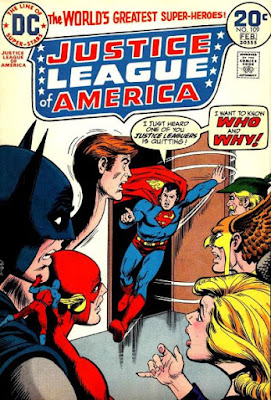 Bruce Gordon returned first in Justice League of America #109 (January-February, 1974) by Len Wein, Dick Dillin and Dick Giordano, with "The Doom Of The Divided Man" under a Nick Cardy cover (without Eclipso on it).


Bruce Gordon returned, trying to cure himself, but instead created two extra Eclipsos (drawing power from the Earth, nearly dooming our planet), with the three Eclipsos being quite the menace for a nearly full contingent of the JLA (except Green Lantern, but including Batman, who had faced Eclipso before), with the League eventually defeating the villain, but no luck for Bruce Gordon. 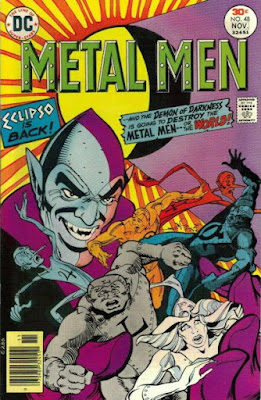 "Who Is Bruce Gordon And Why Is He Doing Those Terrible Things To Himself?" was the title of Metal Men #48 (October-November, 1976) by Gerry Conway, Martin Pasko and Walter Simonson (with Walter Simonson providing the cover...).

Mona Bennet knew, and told Nurse Isobel Sullivan and her friend, Johanna Rome, who brought her to Doctor Will Magnus (the creator of the Metal Men), who help stop Eclipso.

Eclipso faced Tin, Platinum, Iron, Gold, Lead and Mercury, heading to the Peruvian cave of Morphir and his cult on Diablo Island, using an ancient tablet and his black diamond to summon Umbra, the dark god... 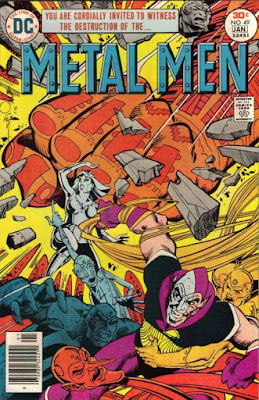 
Umbra empowered Eclipso, and it was revealed that Morphir was trying to release Umbra when Bruce Gordon first interrupted him during the eclipse where Morphir scratched Gordon (and Morphir died).  Umbra planned on sacrificing the humans there to release the rest of the dark gods and destroy the Earth, but were stopped by Dr. Magnus and his Metal Men, with Mona and Bruce hoping that Eclipso was gone for good as Umbra's tablet was destroyed. 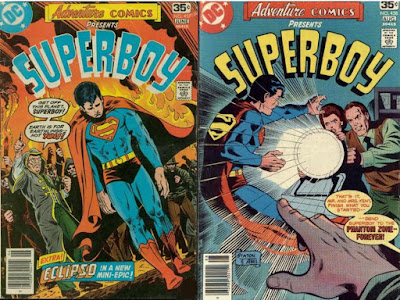 Bruce Gordon, Mona and Professor Simon Bennet quietly returned as a back up feature in Adventure Comics #457 (May-June, 1978) and Adventure Comics #458 (July-August, 1978) by Len Wein and Joe Orlando (with Frank Giacoia inking #457's "The Symbiont Syndrome", and Bob Layton inking #458's "He Who Survives!"). 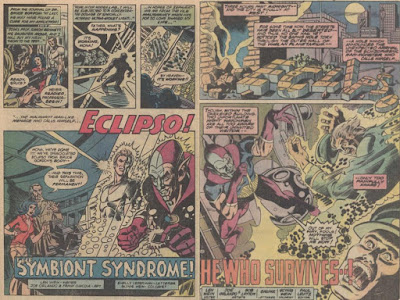 Simon and Mona were again trying to split Bruce and Eclipso, with Bruce fading away due to their split (and Eclipso escaping), trying to get more power, but ending up re-merged with Bruce Gordon again (and all this had nothing to do with Superboy, who was fading out on his own in the front story of each of these books).

This wasn't the end for Eclipso, or for Bruce Gordon, who got a job at Ferris Air for a time... 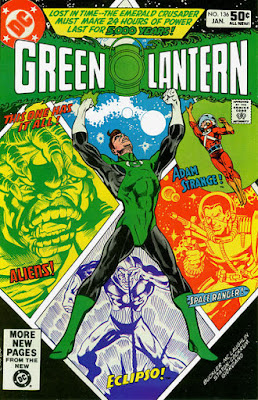 Then, Eclipso returned in Green Lantern #136 (January, 1981) with "The Space Ranger Strikes Back" by Marv Wolfman and Joe Staton, at a particularly Crisis filled time for Green Lantern Hal Jordan (under a cover by Rich Buckler, Frank McLaughlin, Joe Staton, Dave Cockrum and Dick Giordano!).

Dealing with a missing Carol Ferris, a menace in 5708 (where Chairman Dasor of the Solar Delegates would bring Hal to from his current time, wiping Hal's memory and reprogramming him as Pol Manning, to be aided by Iola Vane), but Eclipso's appearance messed that up, instead with Hal ending up in Space Ranger's time (where he would be occupied for this and the next issue, fighting the Gordanians in both time periods)...all while having to deal with only having one 24 hour charge of his Power Ring! 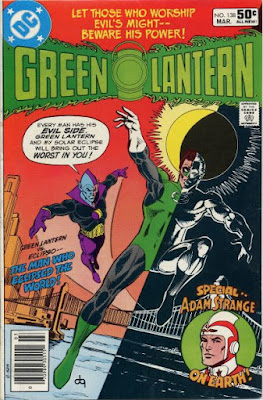 Hal returned home to "Total Eclipso" in Green Lantern #138 of March, 1981 by Marv Wolfman, Roy Thomas and Joe Staton (and a cover by Dick Giordano), saving Thomas Kalmaku of Ferris Air and turning Eclipso back into Bruce Gordon....


....Hal then went on to deal with other trouble (as well as getting Bruce Gordon to recap Eclipso's origin to him), with Hal feeling the world was safe from Eclipso...


...but Eclipso came out again with his real plan, which is visible on the cover, bringing out Hal Jordan's evil side under an eclipse.... 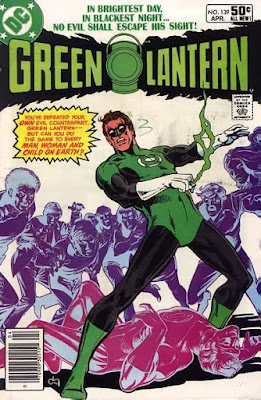 ...and played out in Green Lantern #139 (April, 1981) by Marv Wolfman, Roy Thomas and Joe Staton (and another cover by Dick Giordano), under the title of "Slay On, Silvery Moon!".

Eclipso used a satellite he built (and called the Murder Moon) which he planned to use to eclipse the Earth, and bring out everyone's evil.  Hal, injured fighting his evil side, ended up back at Ferris Air (where Carol had returned, but threatening to blow up the airfield).  Green Lantern had to leave that behind and stop Eclipso's Murder Moon (manned by Nega-Men Eclipso had summoned up with the increased power his moon gave him).  Green Lantern used that extra power to split Eclipso from Bruce, casting Eclipso and his black diamond into space, stopping his plan for a while... 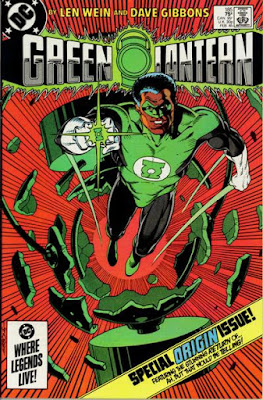 ..."In Blackest Day" (the first of two stories in this issue) to prepare to face new Green Lantern John Stewart (with facts about how John became Green Lantern to replace Hal Jordan for a time, setting up for a battle royale... 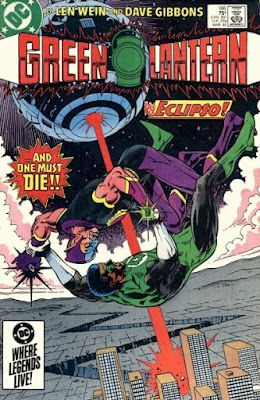 ...."In Brightest Night...!" in Green Lantern #186 (March, 1985, by Len Wein and Dave Gibbons), explaining how Eclipso got back to his Murder Moon, which he was now using to kidnap crew members (including Bruce Gordon) of Ferris Air...

...who had to be rescued by new "hero" Predator, with Green Lantern stopping Eclipso (maybe for good?) as Eclipso lost control of his Murder Moon's tractor beam, and it turned into a death ray.

Bruce Gordon showed up in the next issue of Green Lantern, but Eclipso didn't return until Swamp Thing #46 (March, 1986, as a cameo on the Monitor's satellite) and Crisis On Infinite Earths #9 (December, 1985), working with other villains (and no explanation of where he had come from). 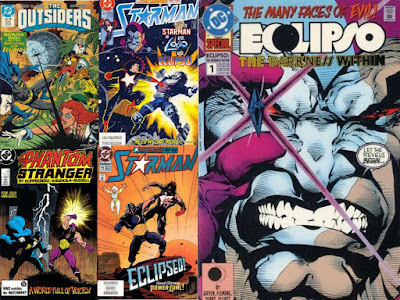 Seems time to bring down the sun on Eclipso for now, but Eclipso did return, menacing the Outsiders, the Phantom Stranger and Starman (Will Payton), Lobo and Power Girl, before revealing that he was an even bigger menace than readers knew in Eclipso: The Darkness Within #1 (July, 1992), which kicked off a series of crossovers in Annuals across the DC Universe.