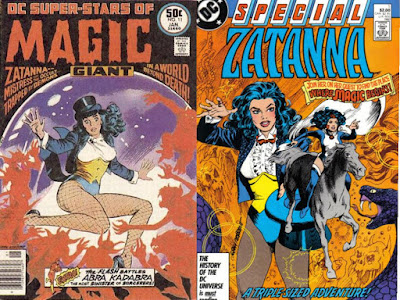 Sometimes an artist comes onto a feature and makes magic, and none was more evident than when Gray Morrow did the art for Zatanna, herself a magician.

For three issues of Adventure Comics (mostly reprinted in DC Super-Stars #11) and one Zatanna Special, readers were treated to Zatanna's solo adventures, with Gray Morrow art.

Let's take a look back at these! 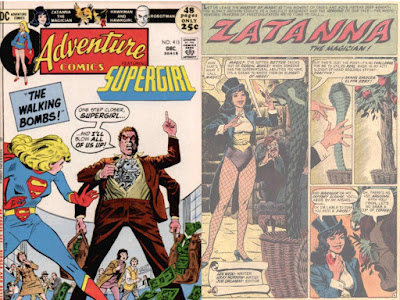 First up is Zatanna's first solo story from Adventure Comics #413 (December, 1971) by Len Wein and Gray Morrow, which starts with magical foul play for her dad, Zatara, and introduces their home of Shadowcrest, as well as Zatanna's stage manager, Jeffrey Sloane, as Zatara is menaced by mystic forces, then sends his daughter and Jeff to another dimension, where they encounter barbarians.

The Tower Of The Dead 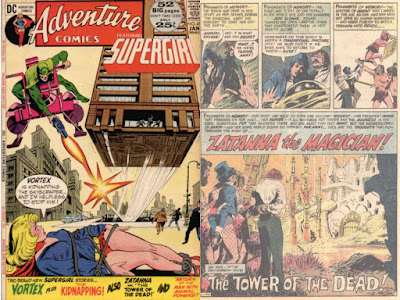 With Adventure Comics #414 (January, 1972) by Len Wein and Gray Morrow, Zatanna and Jeff are taken to King Varnu of this land, who plans on ending the pair, but has them taken to The Tower of the Dead, whom no one is suppose to come out of alive.  There, the duo find the Dimension Juncture home, face zombies (the Army of the Damned), and Gorgonus, who turns Jeff into stone.

Kill Or Be Killed 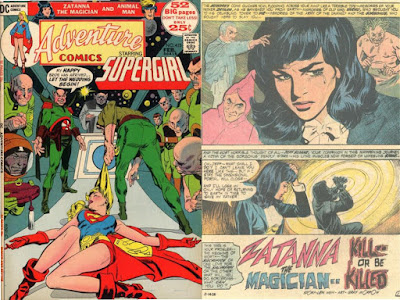 To finish this story in Adventure Comics #415 (February, 1972) by Len Wein and Gray Morrow, Zatanna uses her backwards magic to take Jeff through the dimensional portal to Earth (which restores him to normal), then the pair fight small demons, taking a toll on the duo's clothes, getting a hint of where Zatara is.  They go there, which is Times Square, where Zatara is conjuring monsters, who take Jeff.  Zatanna kills her dad, and Allura, an old foe of Zatanna and Zatara's comes out of him (it was Allura who started this, possessing Zatara to have him perform evil), whom Zatanna captures in a bottle.  Then, Zatara recovers (Zatanna didn't kill him, only knocked him out with sleight of hand...cheap, stage magic instead of the real, backwards stuff), Zatara repairs his damage, and the three head home. 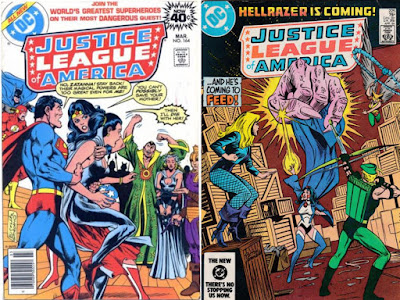 Gray Morrow returned to draw Zatanna on her own one more time.... 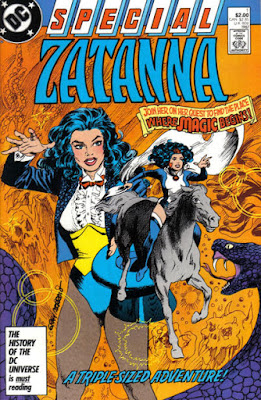 Zatanna Special #1 (1987) by Gerry Conway and Gray Morrow deals with many of the events that happened in Zatanna's life up to this point...

...losing her mother (Sindella of the Homo Magi), as well as her father (that more recently, due to the aftermath of the Crisis On Infinite Earths), and trying to get back into stage magic with Jeff Slone's help.  A magical manifestation of her mother (which interrupts her stage act) starts a mystery which takes her from Shadowcrest (her magical mansion), leading her (with Jeff in tow again, as Jeff will tend to follow Zatanna anywhere) into her mother's mystical land of the Homo Magi, where she meets the High Lord again (the man who was responsible for her mother's death which got Zatanna her first costume change).... 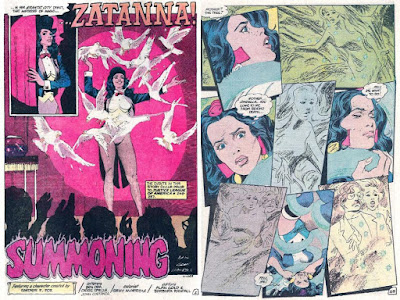 ....as well as Allura, a foe of her father's (yet again, but more joyous this time as Zatanna's mother and father are gone)....

....finding out the real foe she had been fighting all these years...and defeats that as well.... 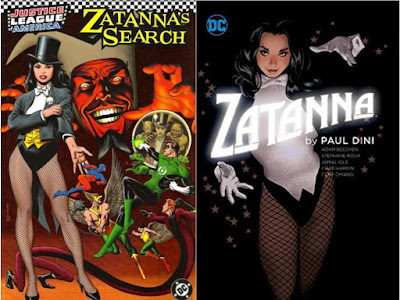 Gray Morrow draws Zatanna a little more, during early issues of the Spectre (facing Wotan and the aftermath of Millennium with the Manhunters).  Zatanna's original adventures were collected in JLA: Zatanna's Search (now out of print), and recent adventures of her solo series were collected in Zatanna by Paul Dini.  Would that DC perhaps put Zatanna's Quest back in print, including her Adventure Comics, four Supergirl solo appearances, one Lois Lane and few World's Finest Comics solo stories as well as the special,  as extra enticement to buy the new book...and see all of this Gray Morrow art in full again, plus more magic!
Posted by Dave's Not Here Comic Blog at 4:04 AM