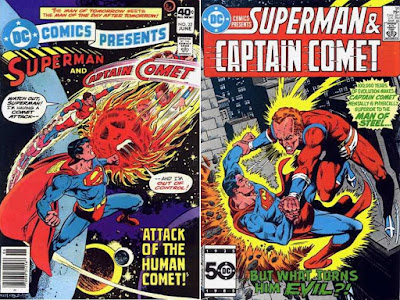 Perhaps it was destiny that made young Kal-El of Krypton become Superman, also known as the Man of Tomorrow.   Tomorrow is where Adam Blake of Earth got his powers, being a mutant with mental powers born 100,000 years before his time under the light of a comet, so he became the Man of Destiny, Captain Comet.

What adventures these two would have together..... 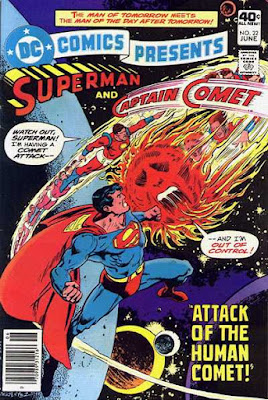 The first of their two solo team-ups happened in DC Comics Presents #22 (June, 1980) by Mike W. Barr, Dick Dillin and Frank McLaughlin, under a cover by Jose Luis Garcia-Lopez, as Superman found himself drawn into "The Plight Of the Human Comet".

A mysterious man showed up at the Daily Planet looking for Clark Kent, but was unable to find him, as Clark was out in the field covering a story (and changing into Superman to stop the looming environmental menace that a leaking oil tanker would cause).   That's where the mystery man found him, as he turned into a comet, and had to be stopped by Superman.  The mystery man was Captain Comet, who had been having "comet attacks" and losing his powers, coming to Superman for help to track down the meteor that gave him his powers.  Meanwhile, Starstriker, a new villain, who was born at the same time as Captain Comet, was looking for that meteor as well, to trigger his own latent mutant powers.  Superman found where the comet would next appear with data from his Fortress of Solitude....and the two headed there. with Starstriker in attendance as well, getting Captain Comet like powers, as Superman had to deal with Captain Comet having his last, potentially fatal "comet attack", which Superman saved him from.  Comet went to hunt down Starstriker, while Superman went to file a story....but, at the Daily Planet, found he couldn't use his powers.  Going to the JLA Satellite, Superman tracked down Starstriker, and faced off with him (as the villain had captured Captain Comet and drained his powers).  Superman freed Captain Comet, who faced off against Starstriker, while Superman stopped the villain's plan to end all life on Earth with 7 comet strikes.  The heroes both won, and had their problems negated. 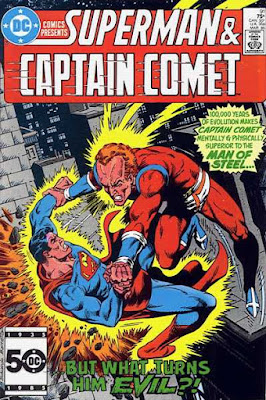 The second of their two team-ups was in DC Comics Presents #91 (March, 1986) by Craig Boldman, Curt Swan and Dave Hunt, under a cover by Eduardo Barreto, with a similarly themed story called "The Brains That Stormed Metropolis".

This time around, the action started with Superman fighting Brain Storm (a JLA foe, who used a helmet to increase his intelligence, and fought from a floating chair).  Brain Storm was looking for a way to increase his own powers, when he saw Captain Comet stop a theft at the Metropolis Science Expo (coming for the exhibit on future man, and unsure why he has the powers of a man from the future, yet the appearance of a modern man).  Brain Storm lures the Captain to him, and starts to steal his power, but while Brain Storm gets powers, he also sees Captain Comet evolve into more of a future man!  As Brain Storm fights the evolved Captain Comet for a time with his new powers, he also loses his helmet, which gets picked up by Clark Kent's paranoid neighbor, who accidentally uses it to instill fear and paranoia in the citizens of Metropolis as Halley's Comet flies by.  Superman catches up with the battling duo, with Brain Storm telling Superman that along with the powers he got, he accidentally took away the restrictions Captain Comet had subconsciously placed on himself to live in the present...and that it would take his helmet to stop the problem.  Superman retrieves the helmet, and puts it on Captain Comet, who is restored to normal, undoing the damage caused, including removing Brain Storm's powers. 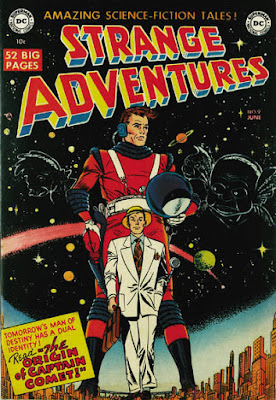 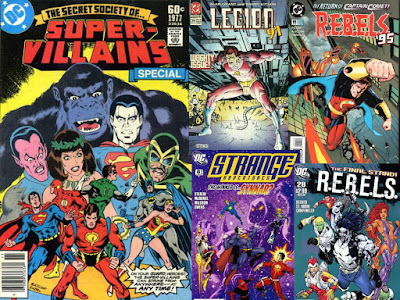 Still, Captain Comet returned, being the main hero battling the Secret Society of Super-Villains (starting with their second issue, during this time is when Captain Comet first met Superman, as well as a few side appearance with Tommy Tomorrow and the Atom), or working with the L.E.G.I.O.N., starting with issue #16, (June, 1990), and eventually finding his own way again, this time in the second volume of Mystery In Space, meeting the Weird, then becoming involved in the Rann/Thanagar Holy War along with Hawkman, Starfire, Adam Strange and more, and finally being in a run of issues 1 to 8 of Strange Adventures (also with the outer space Starman and Bizarro as well), and joining Adam Strange in L.E.G.I.O.N.  with the second R.E.B.E.L.S. title.