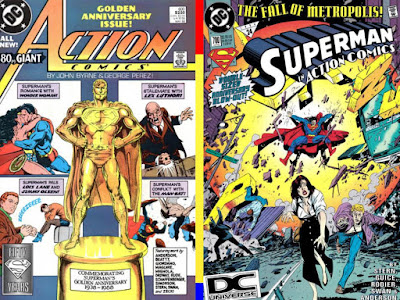 Continuing on, and starting to rack up the numbers for the Man of Steel, a look back at a few very special issues of Action Comics....

...this time, Action Comics #600 and #700, where Superman's Anniversary got to be a much bigger event and involve many more people! 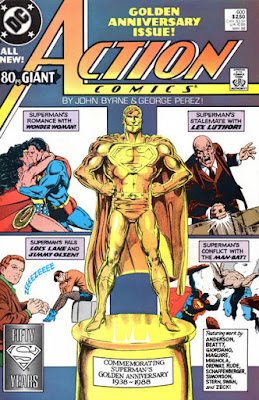 Celebrating Superman's 50th Anniversary as well as being issue 600, it also hearken back to the days of the 80-Page Giants/Superman Annuals, with John Byrne doing the main figure, and four panels from the stories on the inside.

Now, fair warning, this wasn't the Superman who celebrated the previous anniversaries, as this was the post-Crisis (on Infinite Earths) Superman, or, at the time, also referred to as the "Modern Age" Superman (as opposed to the Earth-2/Earth-1 or Golden Age/Silver Age Superman who had been in the previous tales.... 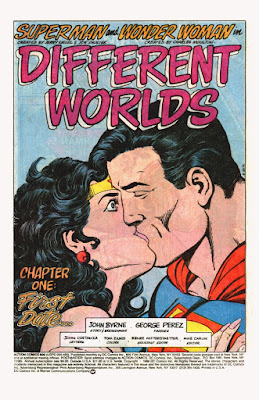 As, in the first tale of this issue, Superman meets Wonder Woman for the first time (just go with it, as Superman's history had a lot of the Silver Age stuff erased for a time, and Wonder Woman had all of her history taken away, leaving Paradise Island for the first time after the Crisis On Infinite Earths...which meant she wasn't there to be a charter member of the JLA, or directly inspire Wonder Girl from the Teen Titans....).   Anyway....

In "Different Worlds" by John Byrne and George Perez, Superman starts the issue with a bang (or at least a kiss).  A little forward, but the Wonder Woman and Superman titles of this month were leading up to this moment, as many people feel Diana would be a better match for Clark than Lois Lane.  Still, they backed off a bit, and were occupied by Darkseid and his Apokolipian forces, as they tried to invade Olympus.  A truly mighty story, with Clark and Diana parting as friends. 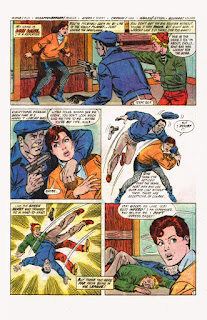 Next up is a story with Lois Lane, reacting to the headlines of a Superman/Wonder Woman romance, with a plot by John Byrne, script by Roger Stern and art by Kurt Schaffenberger (who worked on the classic Superman's Girlfriend, Lois Lane series, as well as Superman Family and more).

Lois was not all that happy that Superman seemed to found himself an Amazonian Princess, but Clark Kent showed up at her door to try to make her feel better (at this point, Lois didn't know that Clark was Superman).  Clark really was there to comfort Lois....at least until he got an alarm from Jimmy Olsen's signal watch and left to handle the emergency as Superman (upsetting Lois to no end....again).

The next story in this issue featured Lex Luthor (and was written by John Byrne, drawn by Dick Giordano and John Beatty), with "Games People Play". 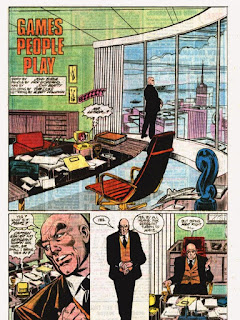 Evil businessman Lex Luthor (one of those post-Crisis changes to Luthor, now a businessman, not mad scientist) was attempting to blackmail police Captain Maggie Sawyer with knowledge of a secret in her life, but was unable to complete his process, as he suddenly had to leave the meeting due to intense pain in his hand.

Checking with his doctor, Gretchen Kelley, Luthor found out that he had advanced cancer in his hand, due to Kryptonite poisoning from the Kryptonite Ring he wore (Kryptonite is not normally harmful to humans, except, it appears, when one has prolonged exposure to it, as Luthor had had).  This would eventually lead to Luthor's hand being amputated, as well his death....but, those are stories for later days (and issues and articles).

Meanwhile, Sawyer gets some comfort from her police partner, Inspector Dan Turpin (whom Maggie will soon tell her secret to....). 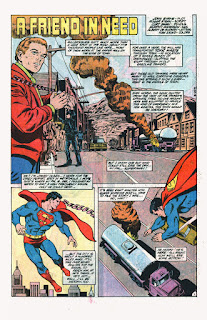 Superman does finally arrive to help Jimmy Olsen, who is a "Friend In Need" (plot by John Byrne, script by Roger Stern, art by Curt Swan and Murphy Anderson, who worked on Superman/Action Comics a lot before the Crisis, as well as on classic Superman's Pal, Jimmy Olsen).

Superman did respond to Jimmy's emergency (a near oil tanker truck explosion in a small town), but as Superman stopped the problem, he fell weak, and it was up to Jimmy Olsen to rescue his pal!  Jimmy thought fast, putting a plan in action, getting a forklift and a mattress to lift Superman, then taking him out of town to the local caverns, which seemed to provide Superman some relief when he was taken there, with Jimmy going to get some help from "the whole darned Justice League" if need be.

With that, Superman was left alone in the cavern, in "The Dark Where Madness Lies" (by John Byrne and Mike Mignola). 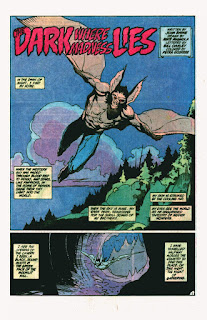 While trapped in the caves, Superman encounters Batman foe, Man-Bat (a little more feral than he was pre-Crisis), and with Superman not exactly in his right mind (and may or may not have met Man-Bat in this version of history), the two battle a bit until Man-Bat leaves.  Shame he didn't stay, as he might have worked well with the high-flying Hawkman, who showed up at the end of the issue (and into Superman #18, where Hawkman and his wife Hawkwoman, would end up helping Superman "Return to Krypton"!

The issue had many pin-ups as well, by artists Medley and Art Adams, Jon Bogdanove, Kevin Maquire and Dave Gibbons, Mike Zeck and Walt Simonson. 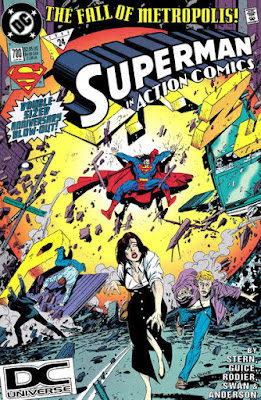 With all the last special Action Comics had, Action Comics #700 (June, 1994) had to be even bigger (even though it was only 64 pages), and it did end with quite a bang with the Fall of Metropolis (including the Daily Planet globe as shown on the cover by Jackson Guice), and a "Swan Song" for a member of the team, in a story by Roger Stern, Jackson Guice with Denis Rodier, and special sections drawn by Curt Swan and Murphy Anderson.

This, the culmination of quite a few storylines well over the last 100 issues (not only of Action Comics, but Superman, Adventures of Superman and Superman: the Man of Steel, as S-triangle #24, as the four Superman titles a month were linked now). 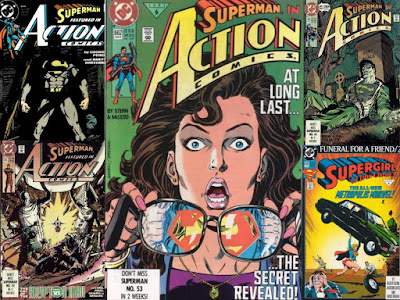 Reporter Lois Lane uncovered the truth about Lex Luthor's son, that he was a clone of the original (supposedly deceased from Kryptonite poisoning Lex Luthor) with the original's memories.   Superman and Superboy (a younger clone of Superman, created by Cadmus Labs, now a smoking crater in the ground), along with help from Supergirl (Matrix, a clone of an alternate Earth's Lana Lang, with super powers) had to try to save Metropolis from the destructive tendencies of Luthor (with only some success), as well as soon leading to a trial for Lex Luthor as he had finally been convicted of murder as well.

Meanwhile, in the special sections drawn by Curt Swan and Murphy Anderson, back in Smallville, Lana Lang and Pete Ross got married, under the watchful eyes of Ma and Pa Kent (in the post-Crisis continuity, they hadn't died and Clark was never Superboy). 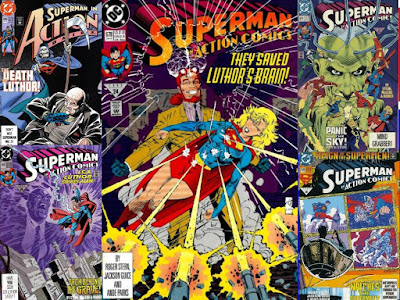 This issue also marked the last Superman tale for a time, as writer Roger Stern left the super-team, having written about 10 issues of Superman, the Action Comics Weekly Superman feature for #601-642, and most of the issues up to #700...