Superman Of The Future 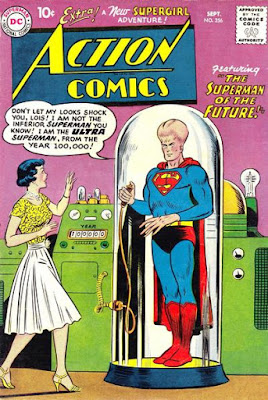 Superman might be considered the Man of Tomorrow, but what about the day after tomorrow?

Well, with Action Comics #256 (September, 1959) by Otto Binder, Curt Swan and Stan Kaye (the latter two also drew the cover), he became "The Superman Of The Future!".

Superman was helping a Professor Wright test a device to travel to the future, but it wasn't our Superman who came back, but instead an  Ultra-Superman from the future!  This Superman seemed to possess additional powers like mental projections, and showed three of four disasters he had to prevent to change the future.  The fourth was horrible, he dare not show it. 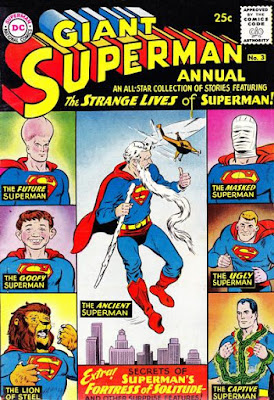 So, this Ultra-Superman was not able to stop the first three disasters, but revealed the fourth was an attempt on the life of the President.  This happened, and the President's limo was destroyed in a bomb blast, but it was Superman inside instead!  Superman came up with the ruse to find an international spy ring, that Dirk Folgar (also known as Agent X-3), was working with, so Superman and Professor Wright came up with the ruse of becoming the Ultra-Superman to expose this plot!

An awful lot of work to find the bad guys, but anything to save the future....and this tale has been reprinted, along with a few other transformations in Superman Annual #3 of 1961!