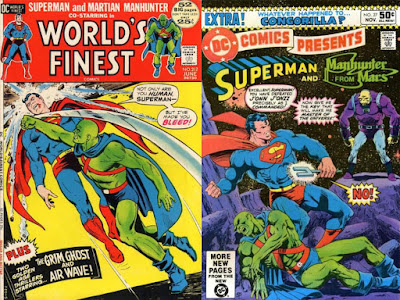 Superman and Martian Manhunter were charter members of the Justice League of America, but the pair of aliens had a few solo adventures together over the years.

Here are two of the more famous team-ups of the Man of Steel and the Manhunter from Mars, where it seemed to more of battle than a social! 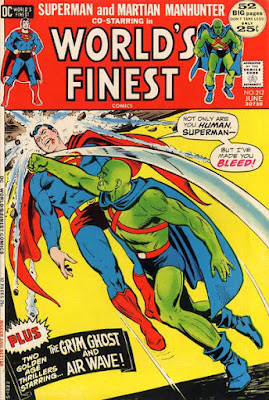 First up is World's Finest Comics #212 (June, 1972) by Denny O'Neil, Dick Dillin and Joe Giella under a feisty Nick Cardy cover, with the pair at each other's throats in a museum that teleported to Earth, as Martian Manhunter has a problem, "....And So My World Begins!".

That problem was on the planet Vonn, where J'onn's Martians had settled after leaving Earth (and where the Martian Manhunter had followed them to).  The Martians were captured by the Thythen, who were using their lifeforce to charge their Robo-Chargers.  The Martian Manhunter ended up in an ancient alien stronghold, that teleported to Earth.  All this stress unhinged J'onn, so he attacked Superman, but the two transported back to Vonn with the structure, a planet under a red sun, so Superman was powerless.  The pair went off to fight the invading aliens, meeting J'onn's female friend and fellow Martian, Bel Juz.  Superman worked to get her alone, suspecting her of being a traitor, while the Martian Manhunter faced the Thythen, with the help of the Robo-Chargers (the Martian lifeforce powering the robots allowed the Martians to control the robots, which would also help them rebuild this world). 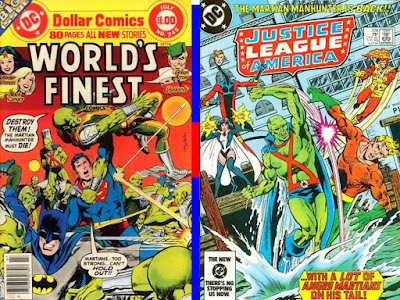 Superman fought one Thythen, transporting back with the museum to Earth, and damaging the transporter so he couldn't go back, leaving J'onn with Bel Juz, the traitor (though that story would not be followed up on until the Martian Manhunter's solo series in Adventure Comics, which ended in an issue of World's Finest Comics with Superman and Batman aiding, and in the run of the Justice League of America that heralded J'onn's return to the JLA and the team's move to the Motor City!). 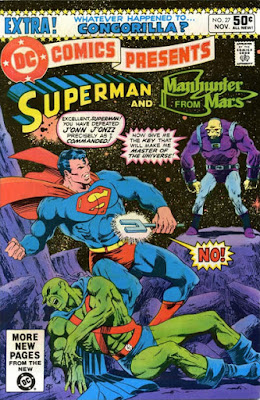 Before J'onn J'onzz returned to the JLA, was DC Comics Presents #27 (November, 1980) by Len Wein, Jim Starlin, Dick Giordano and Frank McLaughlin, with Superman and the Martian Manhunter dealing with "The Key That Unlocked Chaos!". 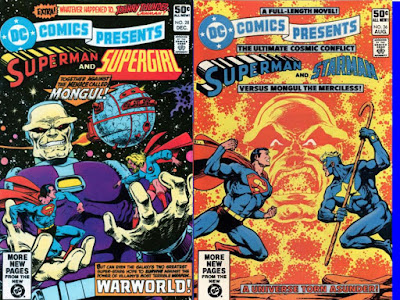 Superman's battle with Mongul continued on after this alien's first appearance, with Superman getting assistance from others as well, like his cousin Supergirl and an alien Starman.
Posted by Dave's Not Here Comic Blog at 4:33 AM