Whatever Happened To Superman's Clone? 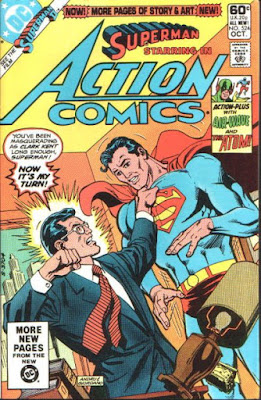 If you read Action Comics #500 (or our review of it yesterday), you might have one pressing question....

...whatever happened to Superman's clone?

The answer to that question happened in Action Comics #524 (October, 1981) by Martin Pasko, Curt Swan and Frank Chiaramonte...

...with the confrontation dramatized on the cover by Ross Andru and Dick Giordano. 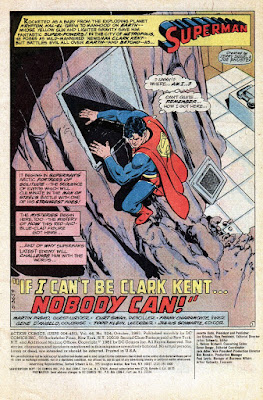 Superman took his now powerless clone to the Fortress of Solitude, but really wasn't sure what to do with a living creature, who had all of his memories, slightly warped into thinking Luthor was not a villain.  Superman locked up the clone, trying to figure out what to do with him, but the clone tried to escape, and Superman thought he was incinerated (though he really ended up in the vents of the Fortress, unconscious due to the suspended animation gas Superman used to keep him a captive).

After a time, the clone woke up, thinking he was still Superman (but powerless), and used a Superman robot to get back to civilization.  While there, working as Clark Kent (while Superman was in space), Perry White assigned him a story on now missing on a flight WGBS reporter Dan Reed and Superman Pavilion founder, J. Robert Arngrim.  In researching Arngrim (and Luthor's clone plan), the faux Clark Kent started having some memories, fueled by the return of Superman to the Daily Planet.  The clone hid, figuring out what to do. 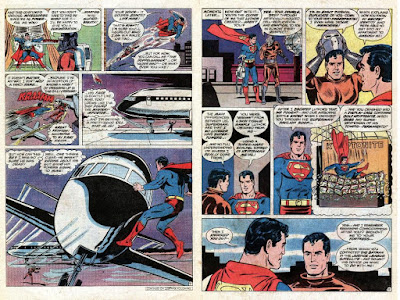 The clone cannibalized the Superman robot to make himself a super-suit to fight Superman with, planning to take over Clark Kent's life after killing Superman....but, being Superman at heart, hesitated in killing the Man of Steel, and after another battle, the clone was badly injured in a fall.  Superman had the clone taken to an army hospital, and had him altered to look like Dan Reed (who had really died in the plane crash, as Arngrim's body was already found), with Superman also having the army alter the clone to look like Dan Reed (albeit with some memory loss...Superman hypnotized the clone into believing it was Dan Reed), this allowing the clone to live on as a WGBS anchorman.

One of the odder times Clark Kent battled Superman, but not the only time, as this shows.  Plus, the second story of the issue features a battle between the Calculator and Atom and Air Wave!
Posted by Dave's Not Here Comic Blog at 3:27 AM